Hi-fi-racks are nearly the only things where a lack of character is not only tolerated but in fact required. It might sound strange, but the Pagode HD03 Edition MK II is a true master of this art. 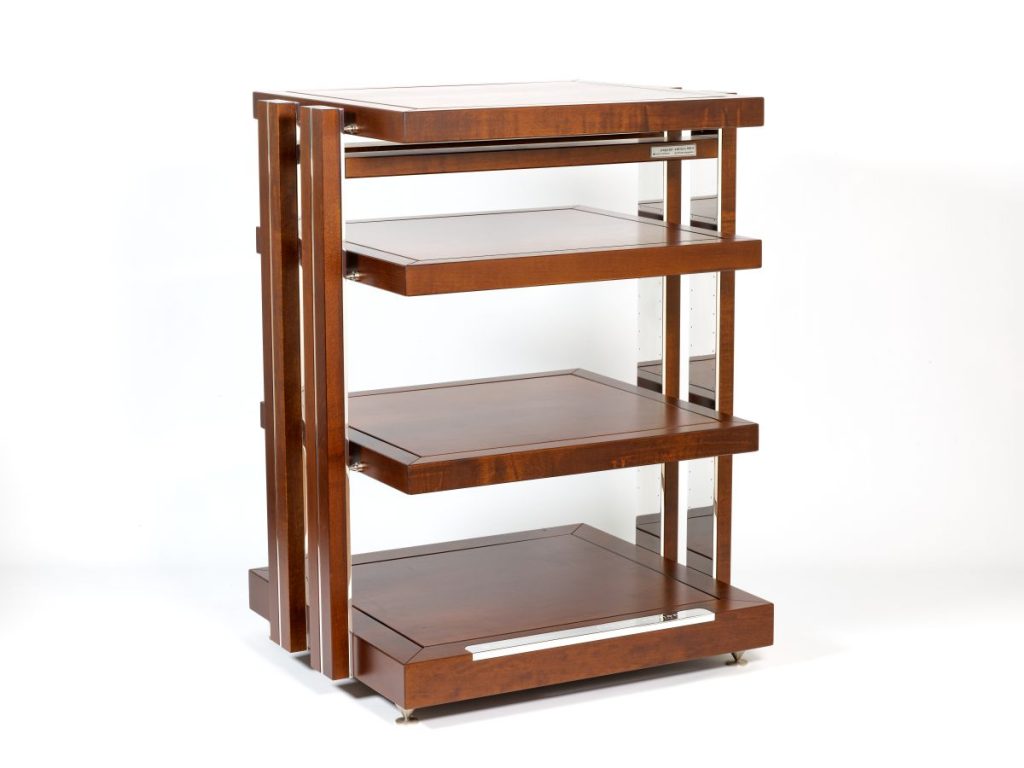 When the talk turns to racks and bases then vibration is the name of the game. The focus centers on the mechanical properties of electrical components and how they behave when the listening room is blasted with pulsat­ing bass. These phenomena generate a distinct microcosm, not because their effects are so infinitely tiny, but because this area of our hob­by is so deeply shrouded in mystery. Are you raising your eyebrows at me right now? Well, next time you can (we recommend a family get-together), tell your less hi-fi-savvy friends and family that you have treated yourself to a fancy new rack like the Finite Elemente Pagode HD03 Edition MK II in order to remove unwanted vibrations resulting from your devices. Their looks, ranging from total disbelief to real concern (which surely you’ve seen before) will haunt you for days to come.

And yet, this is all based on well-established physics. We may not be able to see, taste or touch these physical laws, but we can confirm their existence through measuring technology: mechanics and electricity are condemned to a forced marriage. Magnetic fields form wherever an electric current flows, and, because we prefer alternating current, the surrounding fields’ polarity constantly changes. As there is always metal somewhere nearby, everything from the most delicate conductor track to the chunkiest transformer will vibrate. Electronics cause movement, and externally-caused impact noise and excitation can conversely impact electricity. None of this would be worth mentioning if it weren’t for how excitably materials react to cer­tain oscillation periods — of course, we mean their resonant frequencies. Whenever battle lines are drawn and two heavy hitters (in this case, electronics and mechanics) are irreconcilably driven against each other, a mediator is advisable. This is precisely where a rack comes into play. It absorbs, dampens or channels away the vibrations and ideally Removing one of the inserted shelves reveals the rack system’s intricate construction. The shelves’ ceramic feet sit in small metal troughs in the frame which is decoupled from the external supporting frame with spikes. Resonators sit in the metal plugs that are steadied with rubber rings. One can be seen in the picture on the previous page. 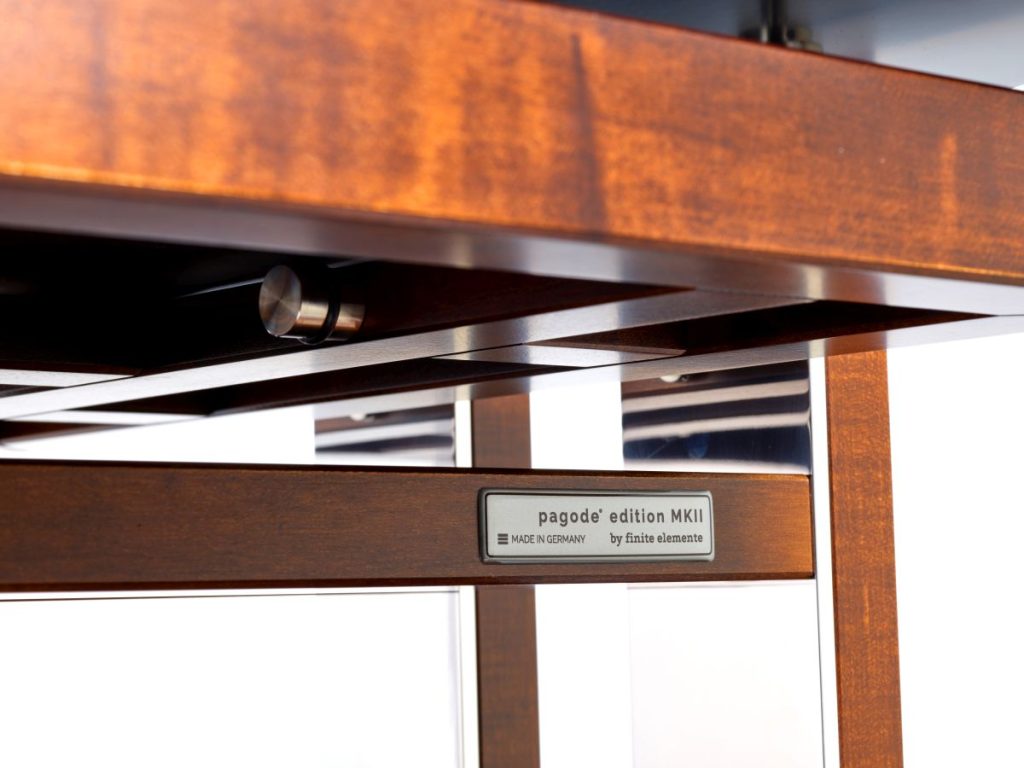 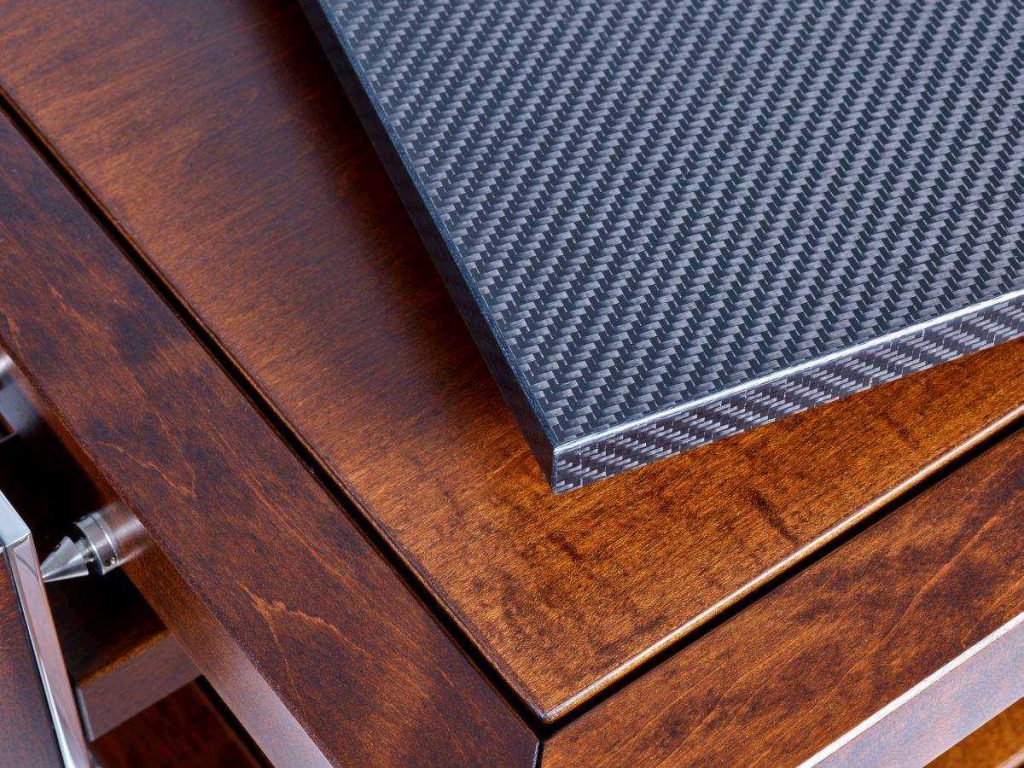 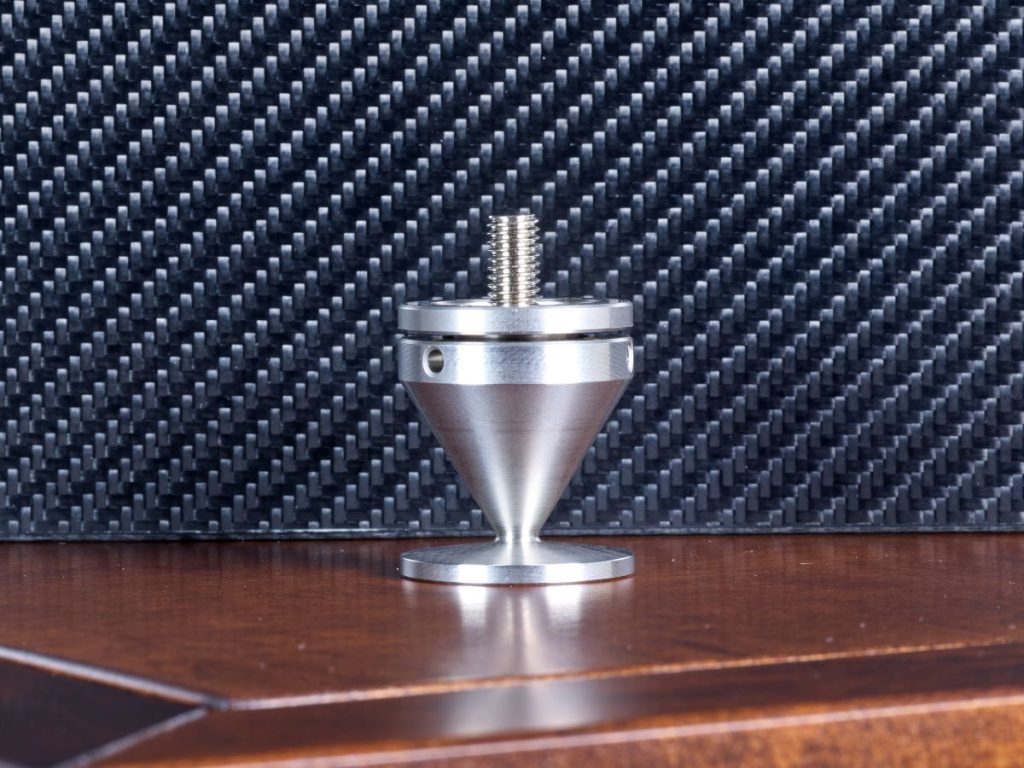 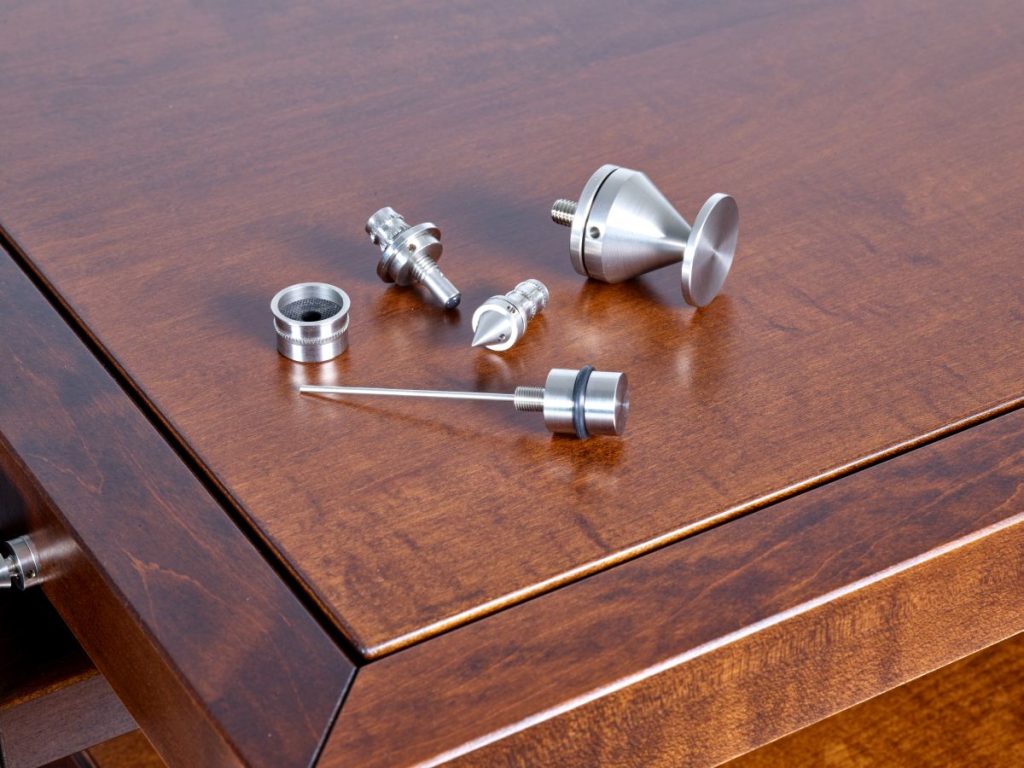 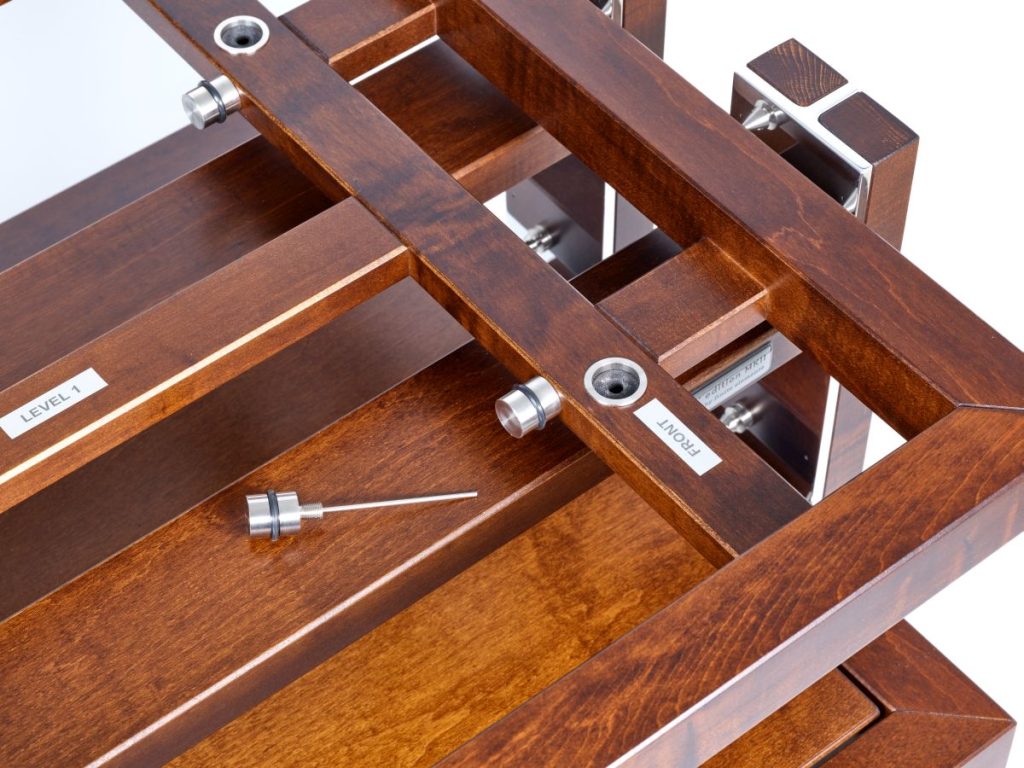 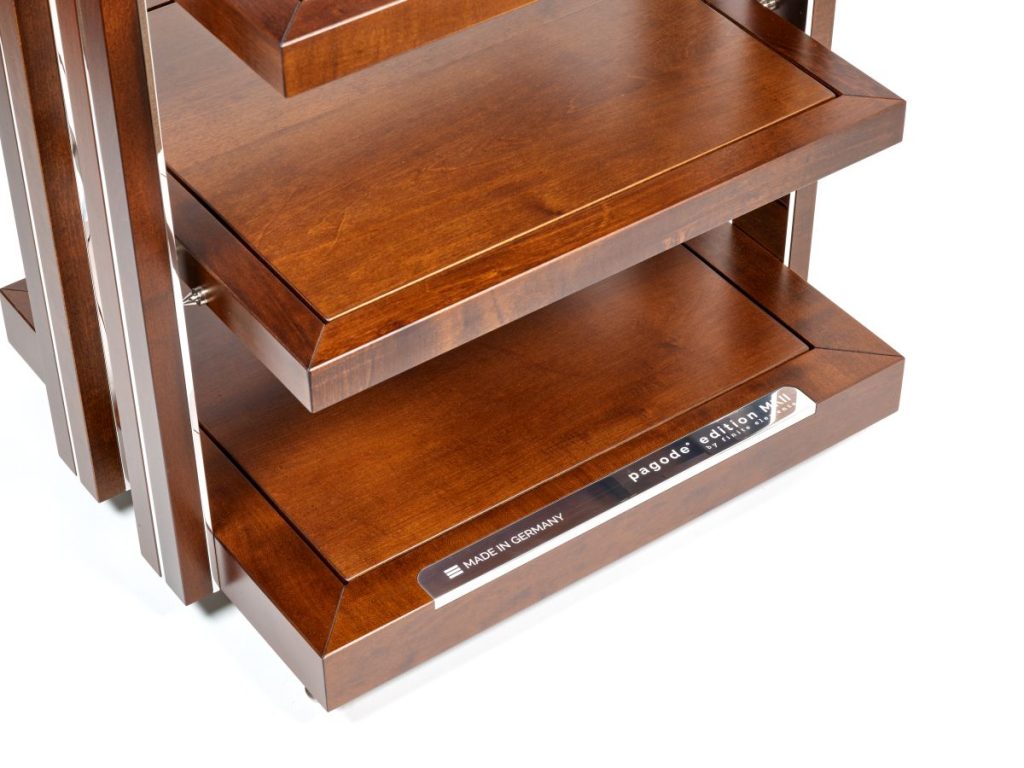 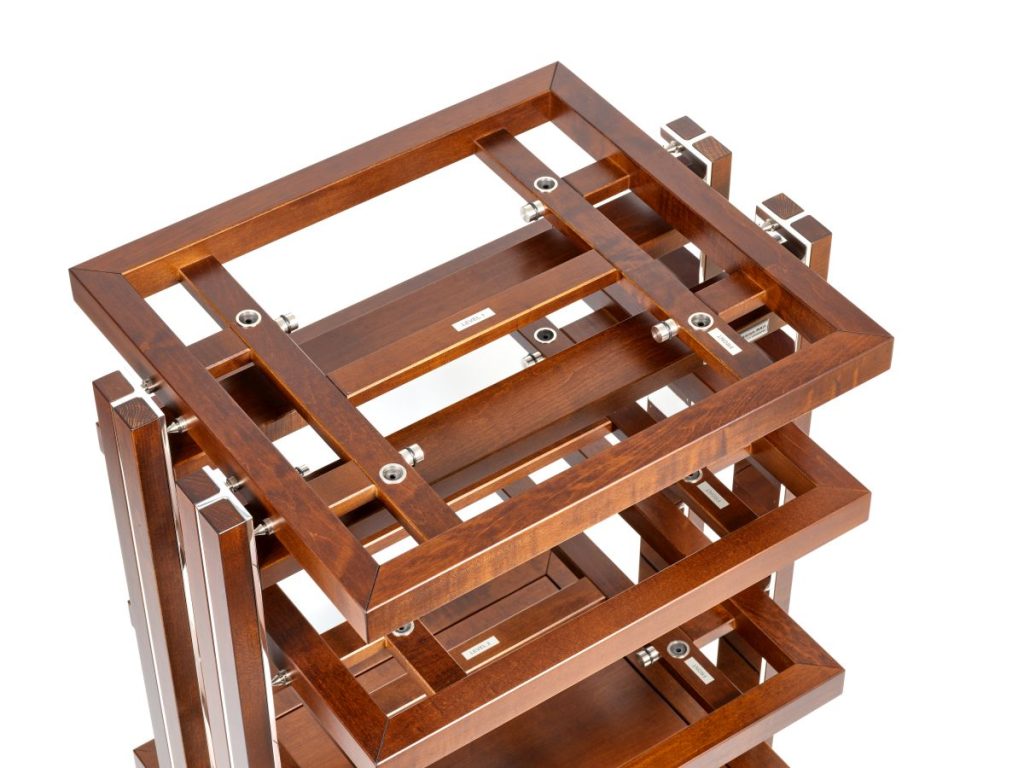 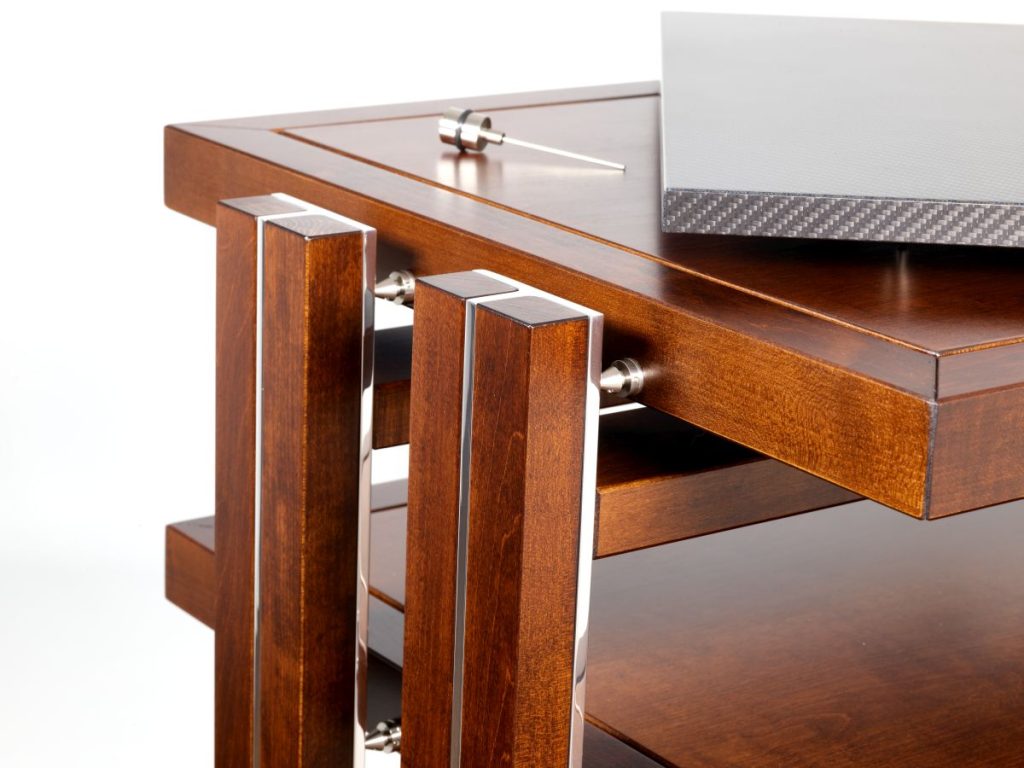 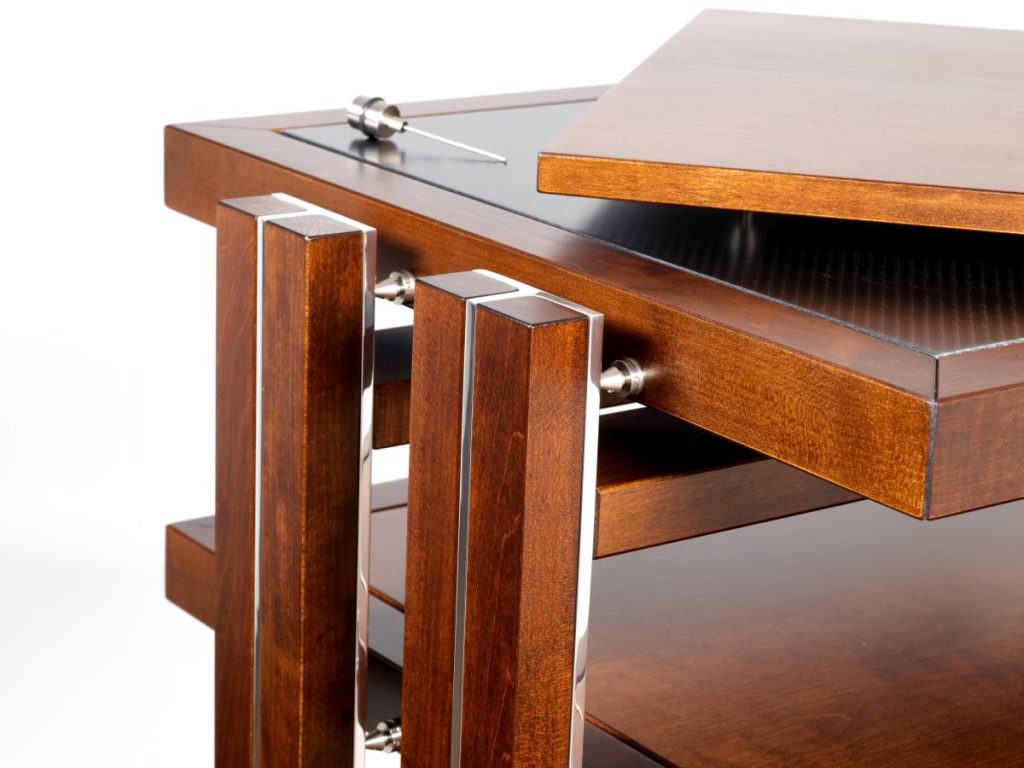 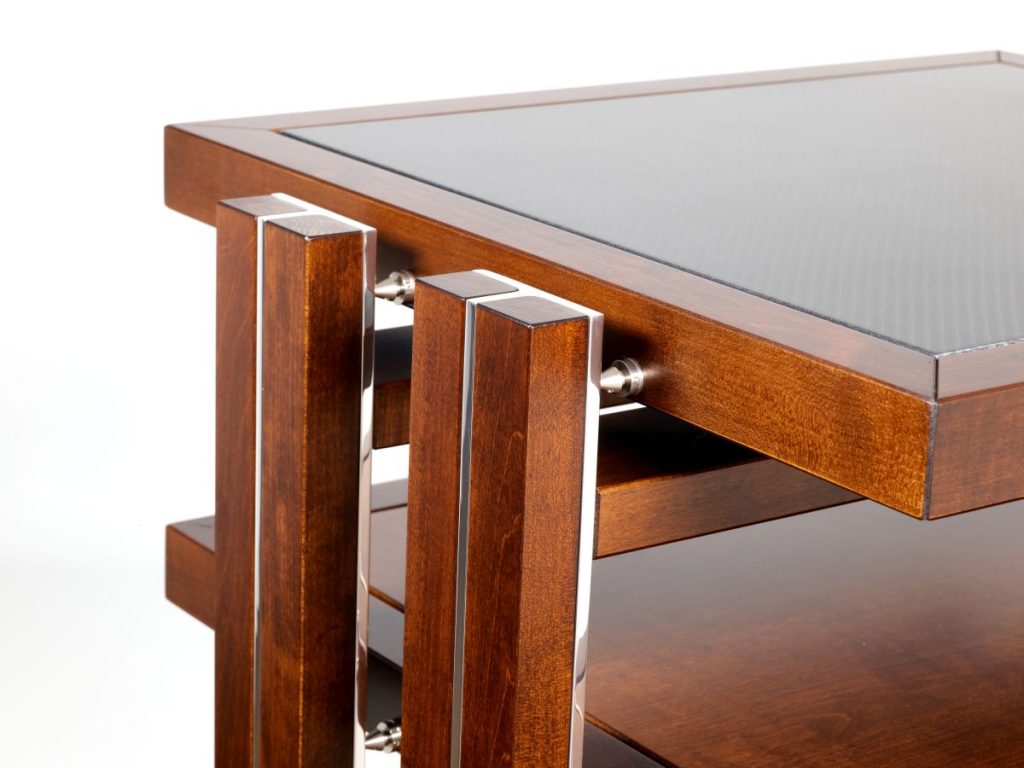 ensures that the individual components can really harmonize and cohere gracefully. And now we find ourselves presented with the true master of this art. In the early 2000s, the hi-fi world was rocked when Finite Elemente launched its Pagode line. This shelving system was so cleverly devised that, when placed next to most of its contemporary design concepts, it looked like alien technology. Until then, most equipment racks maintained a conservative design: metal frame, sometimes heavy, some­times light as a feather, a few spikes here and there, with any real character derived from the shelving materials. It is no coincidence that hi-fi furniture was now deemed to be a full-fledged component once Pagode arrived. Recently, well over 15 years later, the manufacturer decided that it was time to push its racks to the next level with a few subtle but extremely effective changes, culminating in its second-generation (MK II) models. While the changes are hardly noticeable on the outside, let’s dive into the structural design.

A sturdy Canadian maple wood frame forms the solid base for all Finite Elemente racks. This “floor level” easily supports an impres­sive 120-kilo load. Four aluminum T-sections are screwed into the sides and, for the swish “Edition” model, are also maple paneled. These beams are available in different lengths, mean­ing that the unit can be purchased either as a simple base or as a rack with one to three “up­per levels”. The higher levels are identical to the bottom level, but they can “only” support 60 kilos because they are suspended: eight adjust­able spikes hold them in place. This ensures that the levels have only minimal contact with the other rack components. Each frame contains several wooden struts that provide reinforce­ment as well as incorporate inserted shelves. The latter are composed (and this is a key improvement of the generation II models) of an MDF-covered honeycomb structure and rest (another innovative feature) on four height-adjustable metal pins, at the end of which sit ceramic balls. These rest on small metal recesses located in the internal frame. The entire rack stands on Finite Elemente Cerabase feet which are decoupled via ceramic balls. Not only does the whole assembly look fantastic, but also from each individual level to the floor every component is decoupled threefold. The lightweight materials superbly absorb and di­vert vibrations and resonances. This means that devices placed on the different shelves cannot exert any undue influence over one another, and impact noise and loudspeaker energy are almost completely absorbed.

This alone would be adequate to establish the Pagode rack as a high-tech piece of furniture and confirm it as the undisputed leader in its field, but we haven’t even gotten to the best bit. The manufacturer went to town on its design, working with Dortmund University of Applied Sciences and Arts to analyze every component level’s natural resonance via highly sensitive sensors. This is quite different from one level to the next. Then, armed with this data, Finite Elemente developed customized resonators that (as was revealed in the final measure­ments) absorb approximately 90% of natural vibration and 70% of the resonance caused externally by “forced excitation”. The resonators are small metal pins sitting in sockets — four customized plugs are inserted into each level’s struts. Therefore, our test rack’s levels were not only completely resonance free, but also the four levels were equalized via their customized adjustments and behaved identically. Further­more, unlike comparable furniture pieces, it doesn’t matter how you fill the rack.

Can You Hear the Silence?

It’s not too easy articulating the Finite Ele­mente Edition’s impact. And we mean that as a huge compliment. The Pagode system doesn’t add even the slightest bit of character to the components it holds, but rather provides perfect foundations for amplifiers and sources to shine as bright as possible. Of course, this doesn’t become apparent until transferring them from any other rack onto the Edition. I found that the MK II ensured incomparable or­der and depth in the sonic image. Voices stood out clearer from the background and deep bass frequencies growled gnarlier, tighter and drier. Esoteric’s K-03XD, housed on the rack’s top level, maintained more composure and tangibly gained in breadth and stage depth and, as part of the comparison, seemed to reach its full potential only with this set-up. To keep us from badmouthing the defenseless com­petition, Finite Elemente kindly provided the decommissioned MK I version to enable our direct comparisons. While also better than all the competition, the older model didn’t stand a chance. The honeycomb shelves with ceramic mounting spheres embue the music with downright incredible plasticity and transparnecy. It’s actually possible to widen the generational gap even further: As an alternative to the regular shelves Finite Elemente offers “Carbonfibre” shelves that give another ever-so-slight boost to stage extension and palpability.

Obviously, an intricate system that’s that’s ingeniously constructed down to the tiniest detail as well as suberbly finished, comes at a price. However, the performance you get more than justifies it, and I don’t think it’s an overstatement to say: If you haven’t heard your components on the Pagode Edition MK II, you don’t know what they are really capable of!

With the Finite Elemente Pagode HD03 gen two, Finite Elemente pushes the Pagode concept another step further. The “Edition” is virtually free of any character of its own and enables devices to make music in a breathtakingly orderly and tidy fashion. Likely the best rack system on the market.