The Sum of its Parts

High end also refers to the impressive artistry of interplay. So why not house all the equipment involved under one roof? 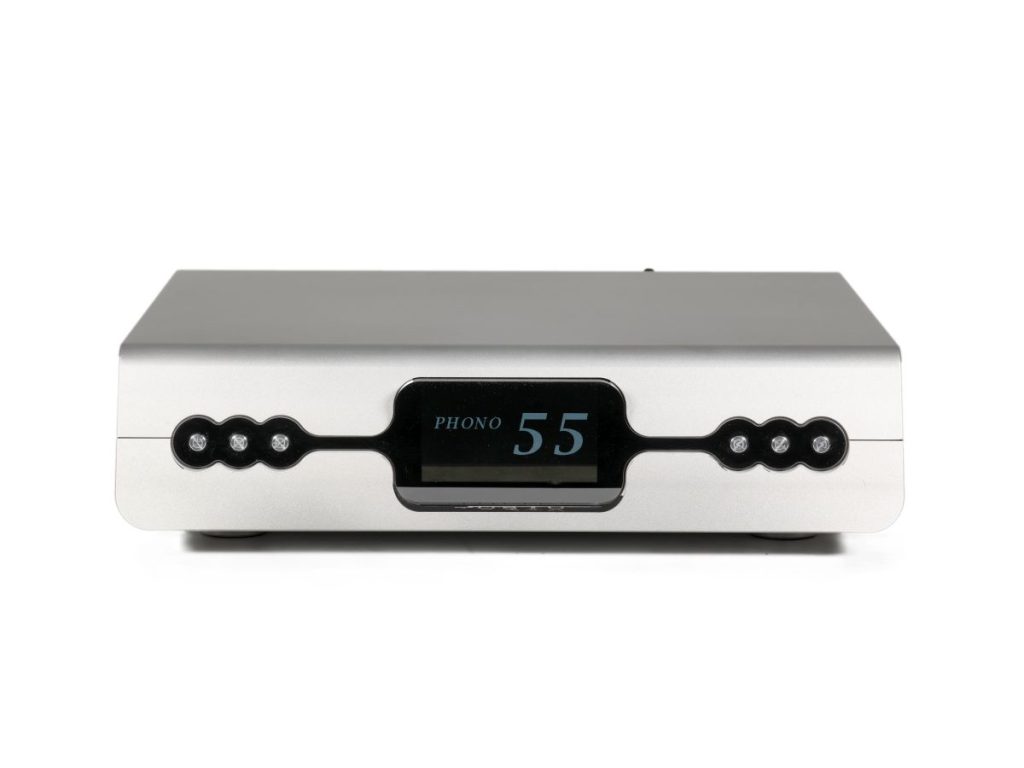 Ever more high-end small-scale manufacturers are focusing on all-­in-one devices and fully integrated digital-analog devices that cover all the bases without compromising any of the essentials. Thrax is no exception. Based in the Bulgarian capital of Sofia, this small-scale manufacturer launched its first venture into this field in 2018. Or, if we’re completely accurate, we should say “ventures”, plural. Thrax has many feet through the tubes door as it boasts both the “Enyo” model, with an amplifier section utilizing fascinating and rare Russian GU-50 pentodes, as well as the purely transistor-based version tested here, the Thrax Ares.

According to Thrax, the Ares is a “modular au­diophile system”. Now, I already had an idea of what that might mean. And I was already aware of Thrax’s distinctive and well-respected in­house metal working. But I wasn’t prepared for what the delivery company unloaded in front of my building: a flight case on a mini pallet, housing a 30-kilo partly solid aluminum cuboid housing hosting a 200-watt Class A-type power amplifier inside its centimeter-thick walls. Let alone all of the optional extras available: a digital module with fully HD-capable DAC and streamer and an MM/MC-compatible phono equalizer. 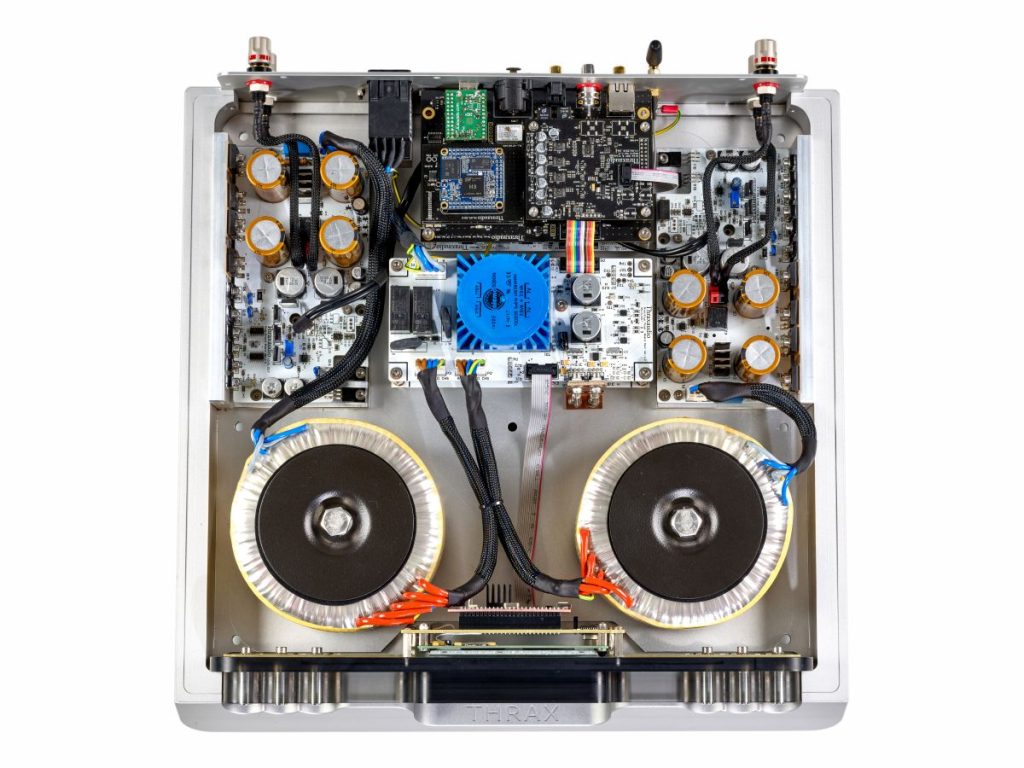 The beating heart of the Thrax Ares is its amplifier. Unlike most highly integrated monoblock systems, no space and energy-saving Class D power amplifiers are utilized here. Instead, two formidable toroidal transformers fuel a high-performance, power-hungry Class A circuit. However, a true, 100% Class A circuit would reduce the Ares to a cooktop and even the nicest wooden rack into an ash pile. With this in mind, Thrax utilized an in-house devel­oped circuit loosely inspired by Japanese A de­rivatives from yesteryear that has been designed to retain the ideal low-distortion operating mode sound without any excessive bias current. But don’t get me wrong, there’s absolutely nothing lukewarm about the Thrax — after only an hour of use, the Bulgarian aluminum block will heat up as fast as Granny’s old tiled cocklestove.

The digital section is modular in design. The in-house developed R2R DAC is accompanied by a powerful AK 4137 sample rate converter and an exceptional streaming module from the Korean specialist mconnect. The DAC utilizes four 16 bit IC resistor networks, reaching a maximum resolution of 24 bit and a sample rate of 384 kilohertz. The user chooses between three digital filters (Sharp, Slow, Bypass) that are easily selected via the large front panel display. There is no smartphone app available. But thanks to its clearly structured and heavily pared-back menus, and with the help of an Ap­ple remote control, this user interface demon­strates that you can still get away without one. Incidentally, while the Ares hardware supports Roon and MQA, the manufacturer was not yet licensed to utilize either when our review was conducted. According to the developer, Rumen Artarski, they are currently in talks with Roon — so, if you’re not keen on streaming via UPnP/DLNA, you should discuss the status of the Roon issue with your hi-fi dealer or the German sales team. On the other hand, after expressing initial enthusiasm, the Thrax team now feels that the MQA algorithm, which is not without its critics, is unnecessary and will not be activating the decoding. 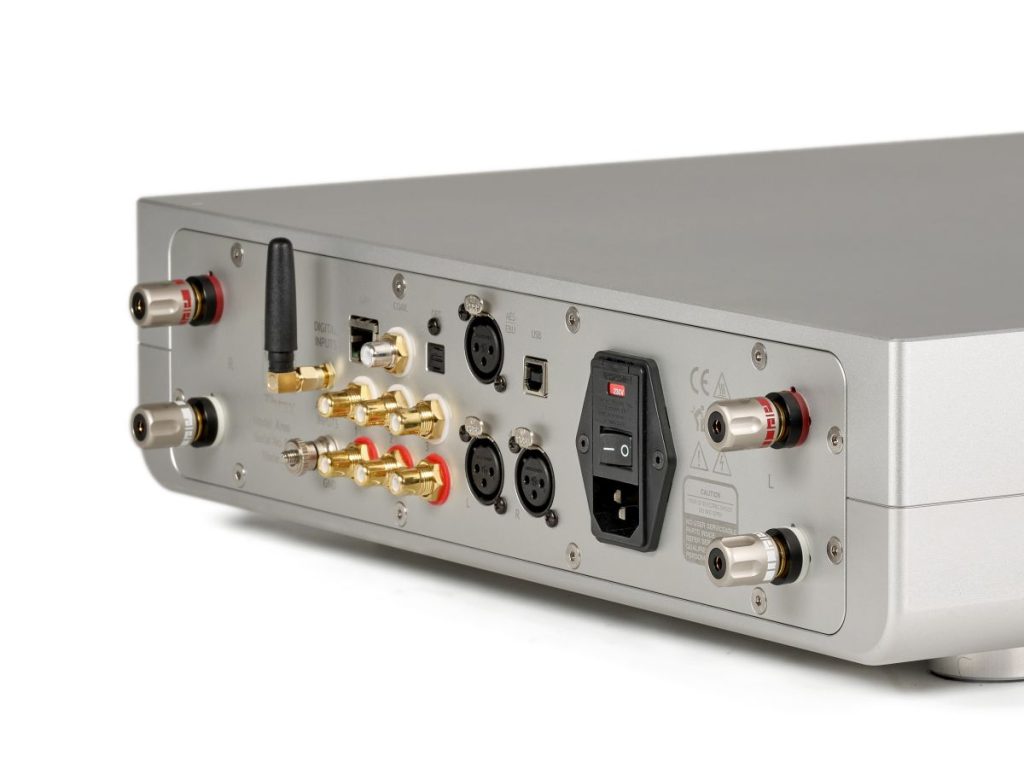 The phono input is designed around a low­noise operational amplifier (op-amp), the OPA211 from Texas Instruments. The RIAA equalization is passive — you switch between MM and MC via the user interface — but the device must be opened for MC mode imped­ance matching. Numerous values between 54 and 980 ohms can then be chosen via DIL switches. The device is preset to 300 ohms and the gain is an equally practical 62 decibels.

The felt pads on the feet of the Ares helped it slide smoothly onto the rack (plus point) but immediately annoyed yours truly, who hadn’t read the operating instructions simply because it was not possible to select the source (minus point). Aha! First I had to select an option with one button and then confirm my choice with another button. The display was nice, large and easy to read (plus point), however the naviga­tion buttons were small with a shiny chrome finish so that I could only determine their func­tions by getting up close and personal (minus point). The connections were high quality and tightly screwed into the housing. This device didn’t just look solid — it really was built to last. If it were ever to fall off the rack, you can bet your bottom dollar that it would keep on playing completely unfazed in the middle of the huge crater that it had created. 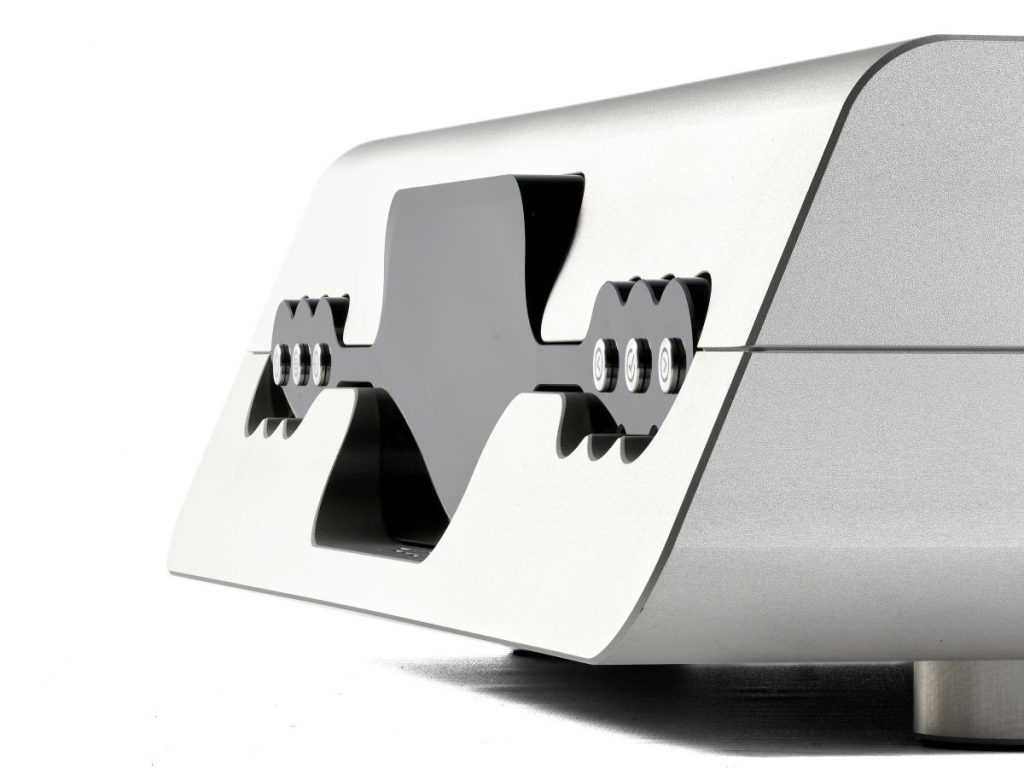 The Thrax Ares is a professional musician in the truest sense. It is neither a romantic, a dissector nor a fan of anything in particular. As such, the inte­grated amplifier stands as a neutral (but never detached or disinterested) audio information communicator. As soon as the first note played, the Ares demanded respect by effortlessly demonstrating that it can give excellent and expensive separate components a run for their money.

To kick things off, I opted for The Oscar Pe­terson Trio’s We Get Requests. I was convinced that the musicians were actually there in my listening room. The recording, now almost 60 years old, sounded remarkably fresh and nearly modern. The drums seemed complete­ly independent of the left-hand speaker and, regarding perspective, seemed to be located exactly three meters behind it. Conversely, the double bass on the right seemed to have moved closer to the microphone. It seemed to be one meter behind and slightly off-center beside the right-hand speaker. Right up the middle was Peterson’s instrument, with this particu­larly muffled, blunt and warm tone, sparkling throughout the room like velvet. The focus here tonally was clearly the miking — and, as a result, the spatial reproduction. The grand piano was obviously much closer to its mic than the rest of the trio were to theirs. The drums occupied considerable yet controlled spatial volumes, and the bass recording was perfectly balanced to a degree rarely experienced, with overtones and, simultaneously, a true low-frequency punch. The Ares conveyed all of this informa­tion unequivocally. 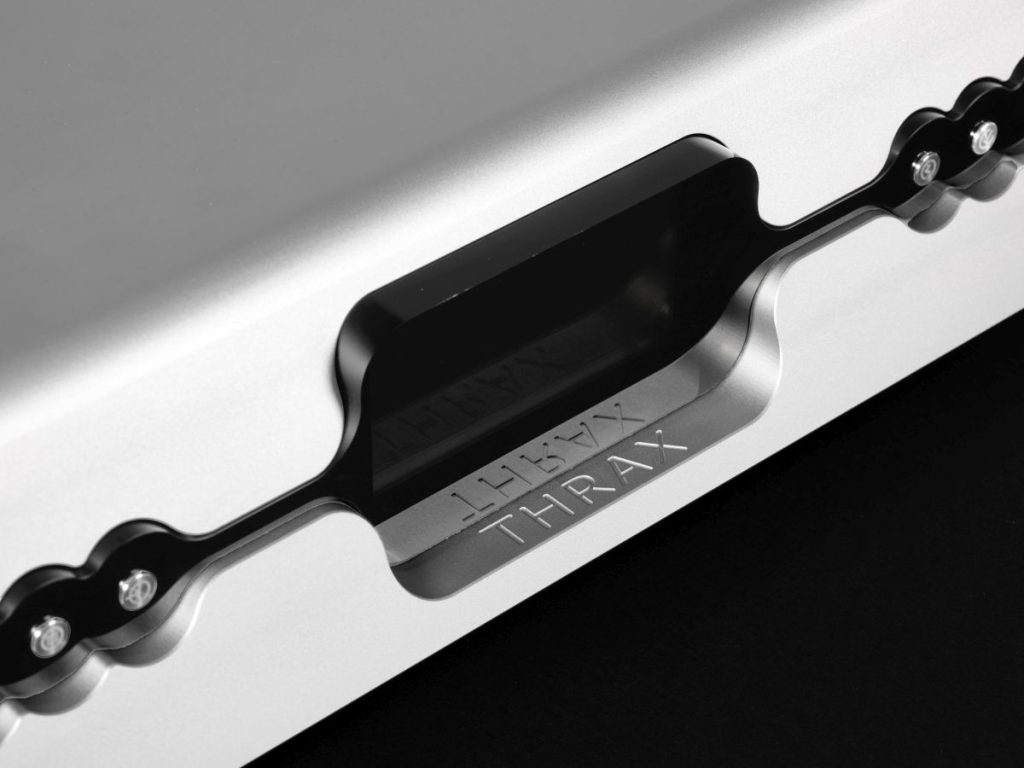 I had just listened to digital music from my Innuos Zenith Mk III, with the data being fed via USB into the DAC input of the Ares. When I connected the Innuos to my converter, an Aqua La Voce S3 (incidentally also an R2R DAC), and sent the analog signal via an RCA connector to the Thrax, a marked difference in character arose: the musicians seemed to loosen their ties, undo the top buttons of their shirts and roll up their sleeves. Peterson’s Trio had suddenly relaxed. The guys were a bit less focused on precision and allowing themselves to smile here and there with a charming grin, bopping along to the beat. As a technical arti­fact, the recording had become less impressive and the instruments not as sharply defined. As such, the swing and flow of the performance were captivating. In short, it sounded differ­ent — but hardly less attractive.

I would be reluctant to attribute these differ­ences purely to the two DACs. We can’t forget that the Ares benefits from perfect internal signaling lines. The cabling of the Aqua DAC, the set-up — it can all make a huge difference. But, on the other hand, that is precisely the argument for the all-in-one solution: peak performance, just as the manufacturer intend­ed. Anyone keen to simply sit back, relax and enjoy the music instead of fiddling, tuning and optimizing will rejoice with the Ares. I played around somewhat with its provided digital filters. The Slow setting quickly became my favorite, whereas the Dither option (addition of inaudible noise) wasn’t utilized. As a result, the sound developed a remarkable combination of flow and openness. 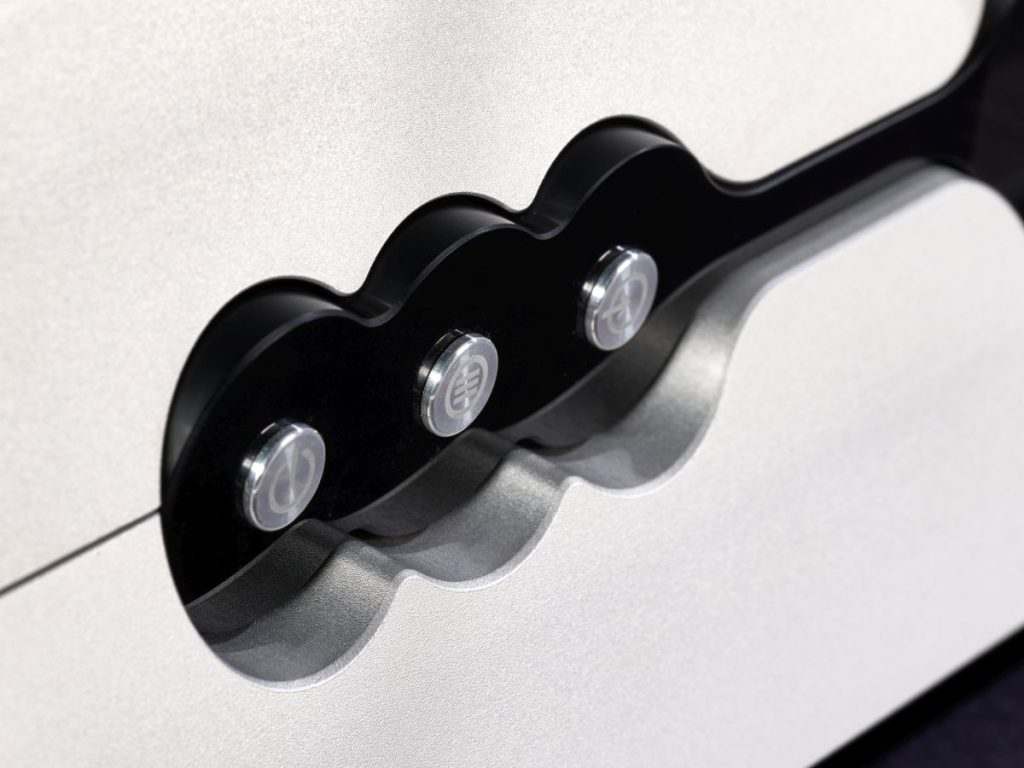 Moreover, the phono input worked exception­ally well. Rumen Artarski modestly said that the MC input is “suitable for top of the mid­range turntables”, but my Lyra Kleos on the Bauer dps 3 easily found smooth dynamics and exceptional resolution in the Thrax. Previously, I had listened to quite a lot of music with tube devices — their tendency to launch charm offensives is not something you would associate with the Bulgarian beast. Here, it’s all precision and neutrality. Artarski gave me another piece of advice: use a decent MC transformer and se­lect the lower MM setting amplification. Then things really got going…

Thrax has a true high-end, all-in-one statement piece with the Ares. The device is, in every respect, a bona fide heavyweight in the ring. Tonally, it utilizes a precise and focused ap­proach, featuring the high-level workmanship you would expect on a tank. I really hope that the Roon certification gets sorted soon. After that, in my opinion, there wouldn’t be a single reason not to recommend wholeheartedly this Bulgarian god of war. 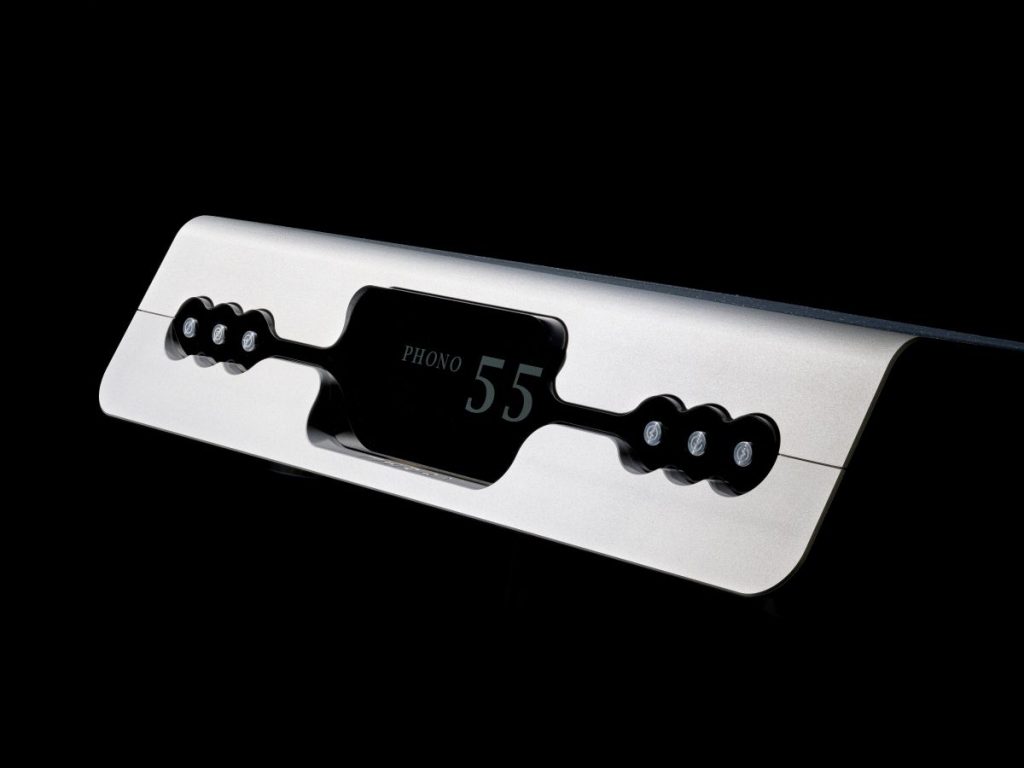 People have previously referred to this amplifier type in many ways, such as “Super Class A” or “Class AA”. What happens is the output transistors never switch off, thereby eliminating the crossover distortion issue and its consequences. The amplifier has no global negative feedback. In principle, what we have here is a passive volume control/source switch that serves the input stage and in turn is followed by both a driver stage with unity gain and without negative feedback as well as our in-house developed output stage. The amplifier is not load-sensitive, meaning that it can drive any loudspeaker.

On the DAC and filter options:

Each filter sounds distinctly different, so we leave it to the listener to decide. However, we may change this one day as people sometimes make the wrong decisions. You will get the best sound from DSD with a deactivated filter (Bypass) or PCM formats with at least 88 kilohertz with an activated filter (Slow). Likewise, the Sharp filter should be selected for CD-quality material. Meanwhile, the Dither option helps out earlier digital recordings produced with 14-bit resolution.