Carnegie Hall in New York City is certainly one of the few halls where you must have played at least once as a musi­cian. Not should – must! Just as famous are only the Großer Musikvereinssaal in Vienna or the Berlin Philharmonie. And indeed, it causes a tingling sensation to read the name of the iconic house on 7th Avenue in Manhattan in anticipation of the upcoming concert tours. 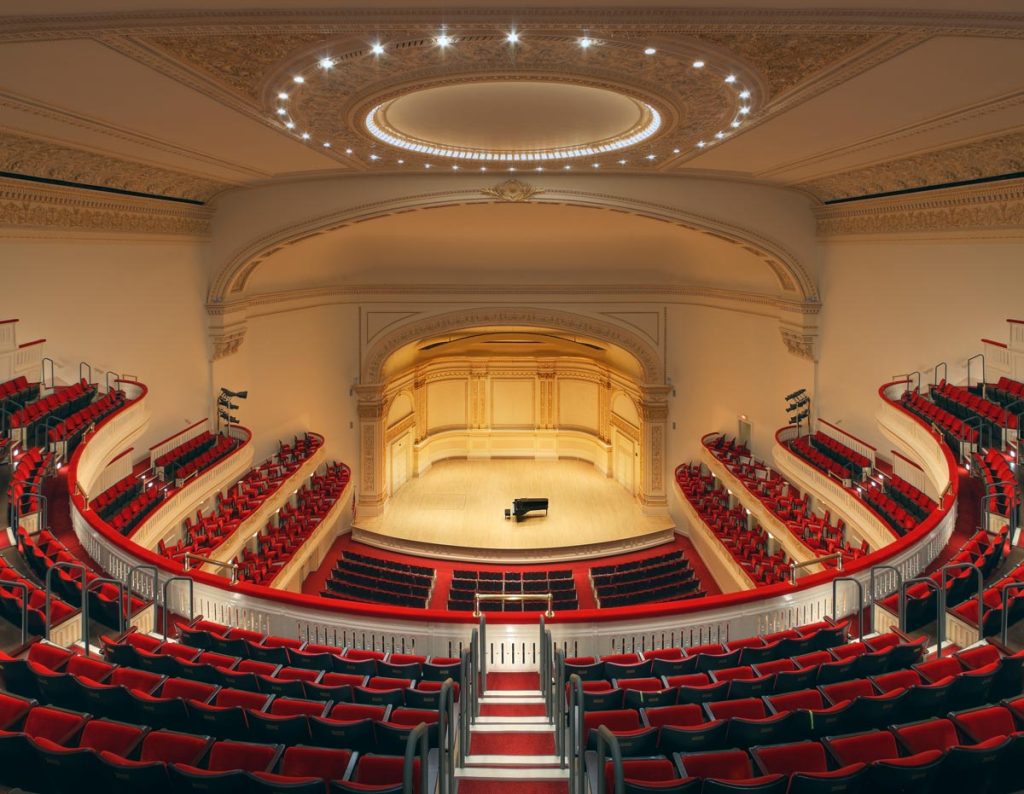 In 1891 it was opened after only one year of construction. However, the construction was not yet finished, and it took another six years to complete. The opening con­certs were conducted by Pyotr Ilyich Tchaikovsky, an election I cannot under­stand, but probably the name was drawn at the time. In the sixties and seventies, the famous concert hall experienced its decline. Luckily, the violinist Isaac Stern took care of her, founded a foundation and raised money to prevent the planned demolition. He was successful in his work, and so the „Isaac Stern Auditorium“ named after him shines in new splendour since its renova­tion in 1986.

A total of 2800 spectators can be seated in the parquet floor and on four ranks, the overall structure of the Chicago Sympho­ny Hall (opened in 1904), which comes from the outside like an (almost) normal building and rounds the stage and audito­rium more broadly than deeply — quite in contrast to a classic „shoe box design“.

For the musician, a concert at Carnegie Hall is quite convenient. There are so many hotels around the hall that you will never be far away. If you have passed the entrance controls and the long, winding corridors, you end up in unspectacular wardrobes, which doesn’t bother you any further — the stage is waiting. There are concert venues that have a magical fluidity that breathe history, and Carnegie Hall is one of them. Here you feel special even before the first sound. However, it may take some time before this happens, because the trade unions of the different professional groups some­times try to play out with their regulations, which can lead to absurd scenes: we came on stage with the orchestra, everything was ready. However, the platforms of the wood­winds were a little too far behind. A brief enquiry revealed that the stage workers were currently in the union-promised coffee break. With regard to the regulations, the idea of the orchestra to move the podiums quickly itself was put in a stop — in this case the union would prohibit the concert. So we had to wait. When it finally got ahead, however, the lighting and sound technicians had their break — and now our contractu­ally assured rehearsal time was coming to an end…

But at the latest when the concert begins, all unbill is forgotten. The sound that emerges here is like acoustic honey. Not as transpar­ent as in the Berlin Philharmonie, but more detailed than in the Vienna Musikverein, sounds of exquisite size and depth unfold here. Thanks to the rounding of the stage space, there is a first-class acoustic projec­tion into the auditorium. This means that you can estimate very well how your own sound develops outside. It is really one of those rooms that seem to carry you through the concert, but this is difficult to describe to all those who know the halls exclusively from the other side.

After the concert, the fun of New York City continues: a fast sprint to Columbus Circle, from there take subway A towards Canal Street — and Soho beckons with the prom­ise that the night will be short.