FinkTeam has designed a loudspeaker jam-packed full of sophisticated visual and technical features and has left us all scratching our head with its quirky name. 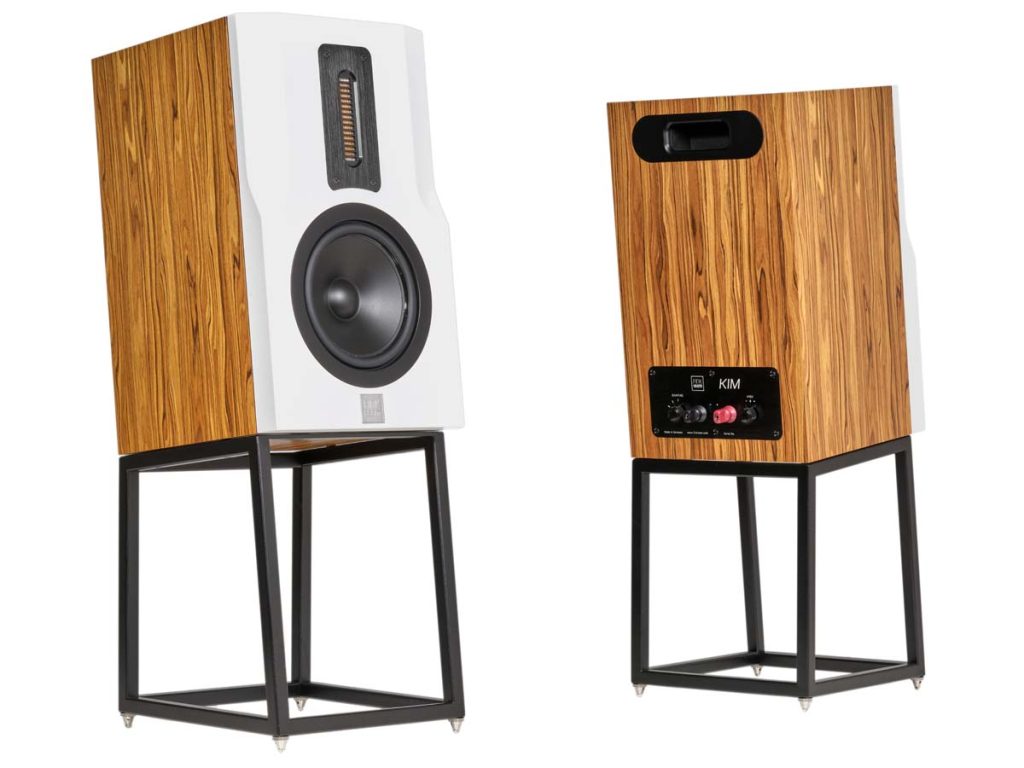 For a long time, the thinking in the loudspeaker industry was that big was beautiful and compact speakers might be a reasonable compromise for a secondary backup system. For sometime now, though, designers have been taking the plunge and experimenting with smaller dimensions while not wanting to put up with any loss of sound quality. Karl-Heinz Fink’s team has also adopted this approach as they’ve followed up the statuesque floor-standing speaker Borg with the rather adorable FinkTeam Kim. Die-hard Trekkies will have no doubt already realized that the name Borg is a reference to the TV series Star Trek. After the colossal Borg cube provided inspiration for the name of the other loudspeaker, it was only fitting for the name of this loudspeaker to be a lighthearted reference to Ensign Kim from the Star Trek: Voyager series. During our conversation, Fink confessed to being an authentic Trekkie. In his opinion, you can certainly bring a bit of humor to the table when assigning names to your device.

Ensign Kim, incarnated as a pair of loudspeakers, had been teleported into my listening room and looked as light as a feather, primarily due to the stands that had been firmly attached to their bodies. The Kims really looked liked they were floating. As always with loudspeakers, I started my investigation by caressing the bodywork and examining the quality of the carpentry work with my hands. It was exceptionally exquisite. In re­sponding to my questions, sales director Martin Klaassen explained that Fink and his team have their own in-house carpentry workshop complete with its own master carpenter who carries out the final in­spection of every single housing. For the size of the housing, FinkTeam had swiftly agreed early on that the loudspeaker should reach “roughly the height of a window sill.” But the result should of course still be a real head-turner as well. In retrospect, it looks like the developers succeeded in their mission — and then some. 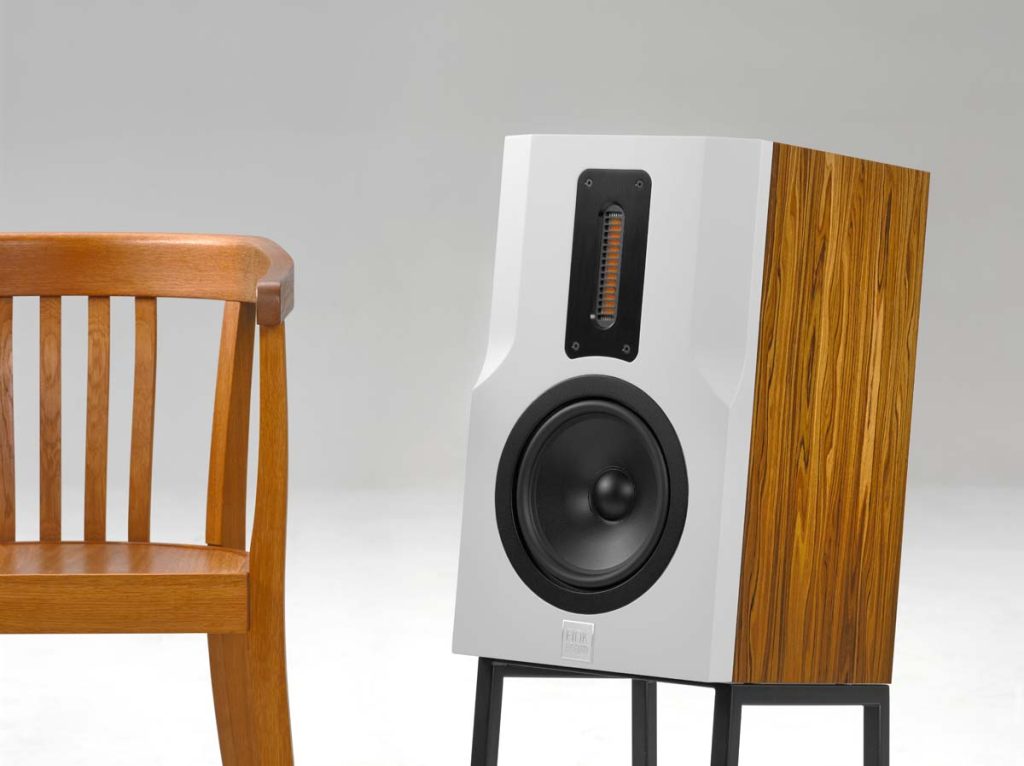 What I first noticed about the Kims was what a dream they were both in terms of positioning and the sweet spot. With some loudspeakers, you feel the urge to reposition them in the room after hearing just a few tracks. And then you experiment by toeing them inward or outward and adjust the distance between them and the walls around them, and so on and so forth. I had none of that here: I simply set them in place, toed them in slightly, roughly positioned them along a line, and eyeballed the right distance from the wall behind them. And it worked like a charm! A bit of care and attention never harms, but I was surprised at how well the Kim speakers played regardless of their positioning: I found they had a wonderfully broad sweet spot that enables the listener to sprawl out and wriggle around on an armchair without a change in head position immediately impacting the central focus of the sound waves. According to Fink, the fact these loudspeakers are broadly unaffected by spatial influences comes down primarily to the cabinet construction that, for speakers of this volume, boasts a generously sized baffle. Then there’s the super quiet, reinforced housing, which was developed on the basis of exceedingly accurate calculations made by a computer. At FinkTeam, nothing is left to chance. The company strives for absolute perfection, which I especially noticed in the Kim’s seamless linearity. Anyone who’s ever heard the Borg before will know about the qualities inherent in the air motion transformer (AMT); a modified version of it was also ordered from Mundorf for the Kim. A 20-centimeter diameter chassis served by a Mundorf air-core coil is responsible for frequencies below 2,200 hertz. 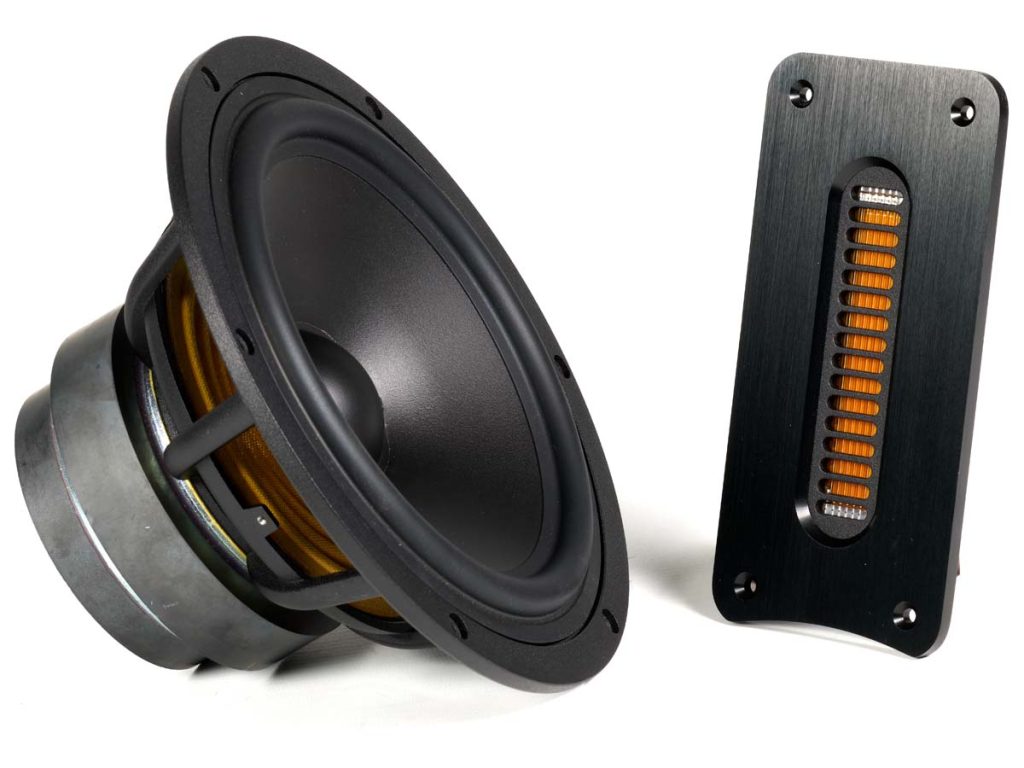 The longer I zigzagged from genre to genre listening to music from my collection, the more I got the impression Ensign Kim would never run out of steam. Whether the long crescendo in the prelude to Wagner’s Tristan and Isolde with Carlos Kleiber or the frequent, abrupt shift in dynamics typical of the guys from Brandt Brauer Frick — everything worked seamlessly. Not even orgiastic orchestral climaxes or brutal beats could throw the Kim off course. It always gave me the impression that, even in the case of the most impressive dynamic peaks, it always still had some gas left in the tank — even given the speaker’s rather snug volume. These impressive audio properties arrive in tandem with unbelievable precision. As I listened to the string quartet Berner Streichquartett perform the broad range of different experimental musical techniques in Helmut Lachenmann’s String Quartet No. 1, I heard them as individually nuanced and identifiable with sound events that never grew blurred or indistinct. The speakers occasionally reminded me of fully-fledged active studio monitors but without the kind of technical sterility that these sometimes demonstrate.

The musical flow exerted itself too prominently in the foreground for that. Even Marcus Miller’s hardest bass slaps were ever so slightly cushioned so that, despite all the dynamics and precision, the individ­ually emphasized musical parameters never became isolated individual events, but instead always remained part of a meaningful and, above all, sensual broader musical context. 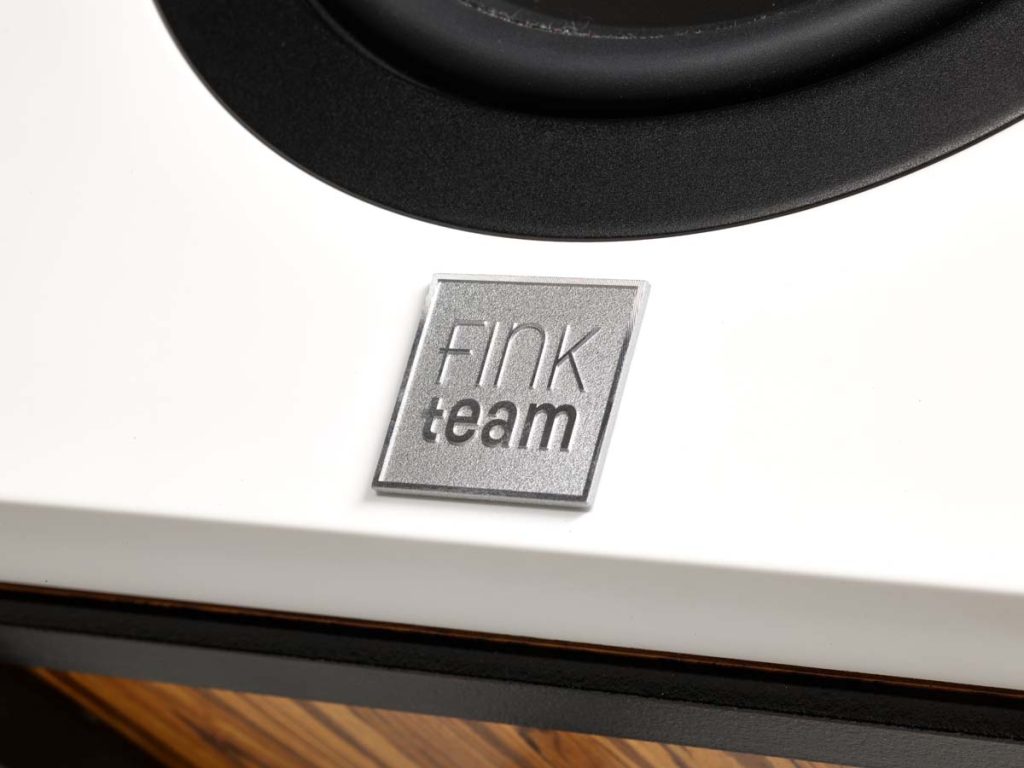 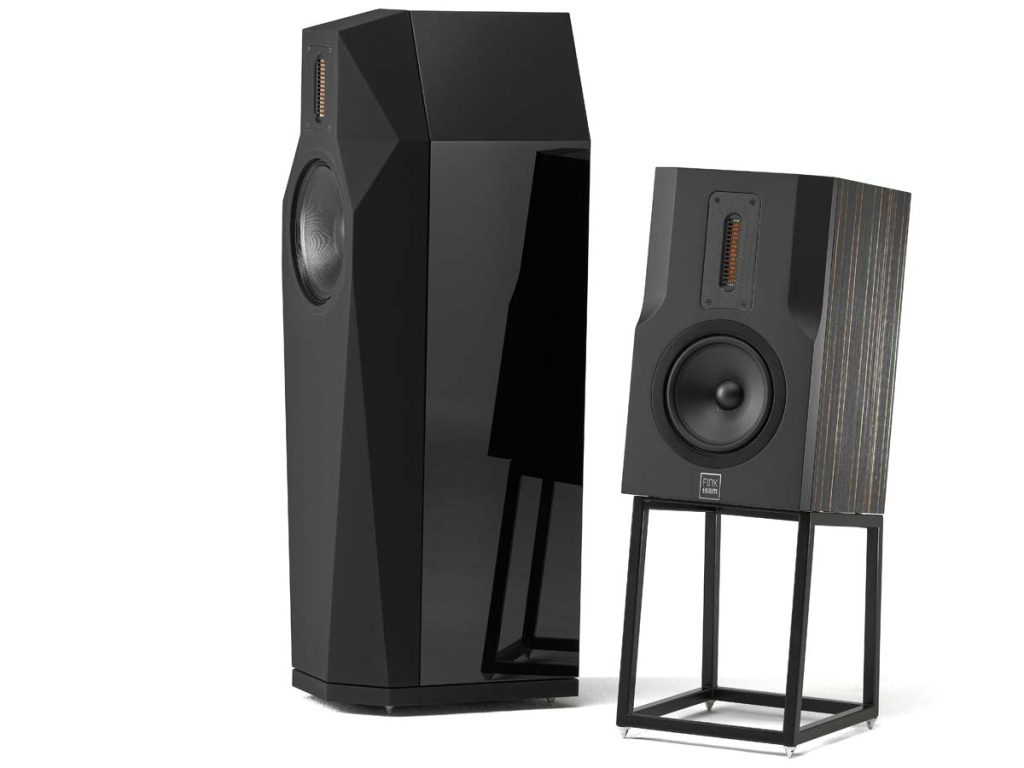 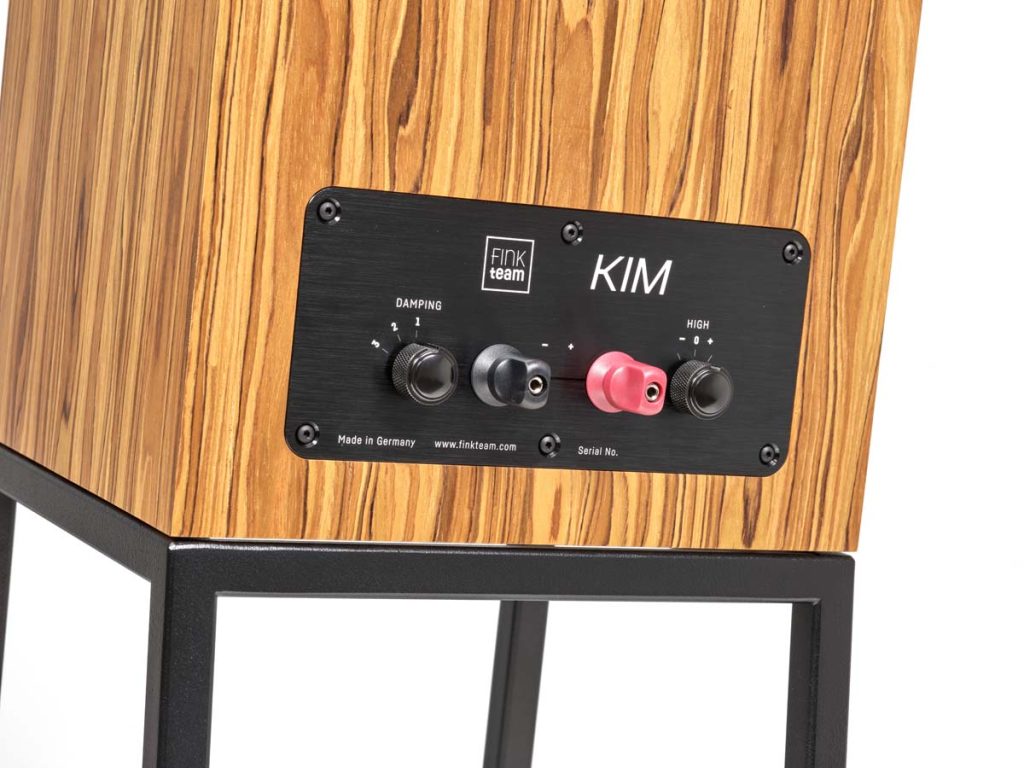 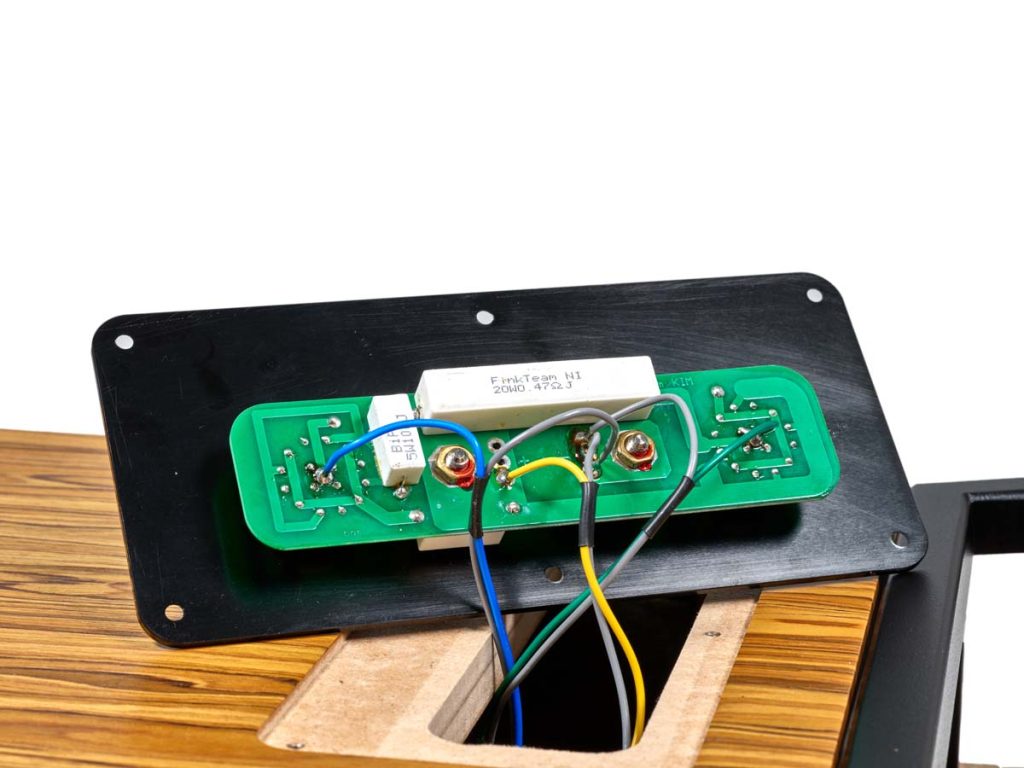 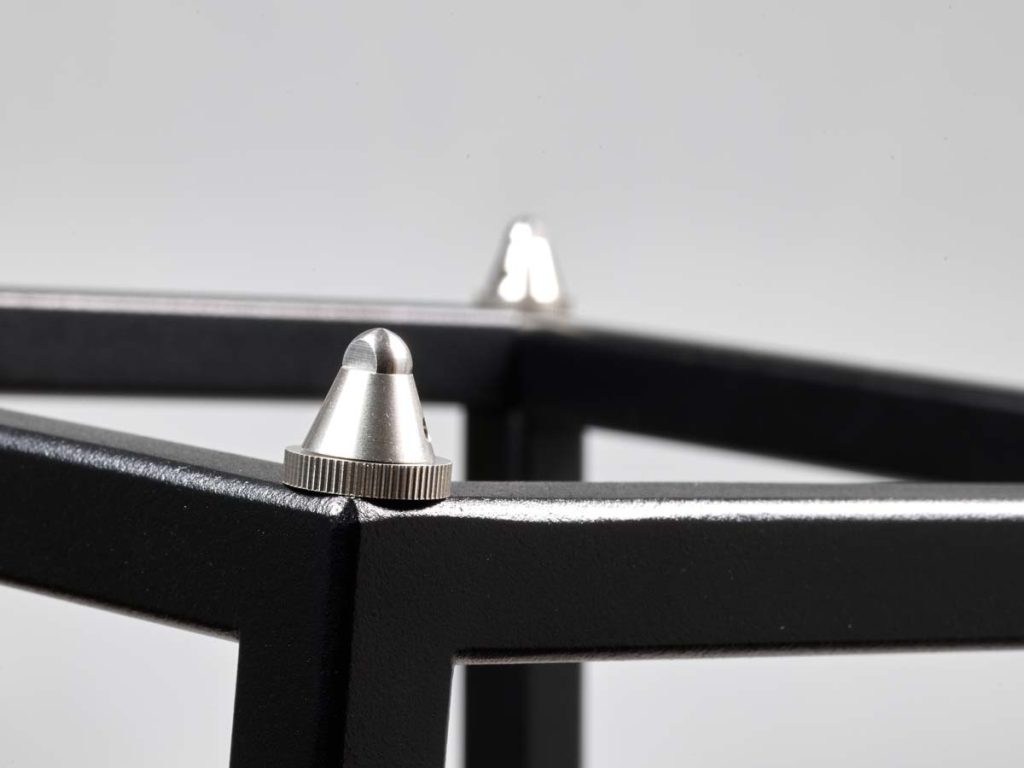 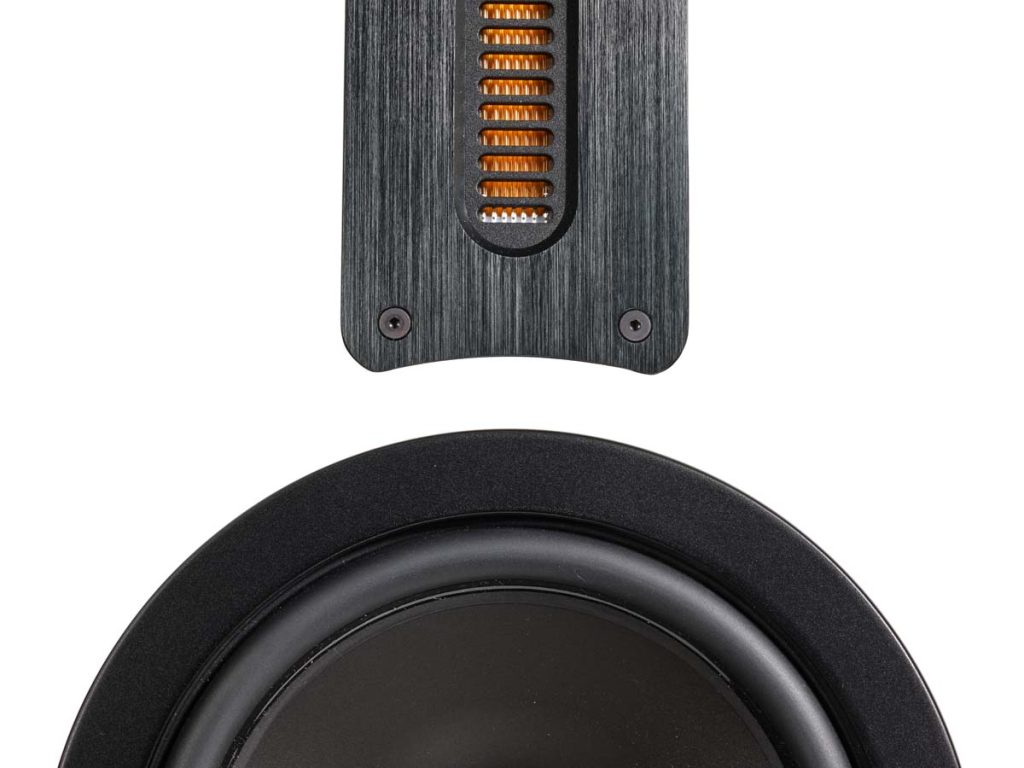 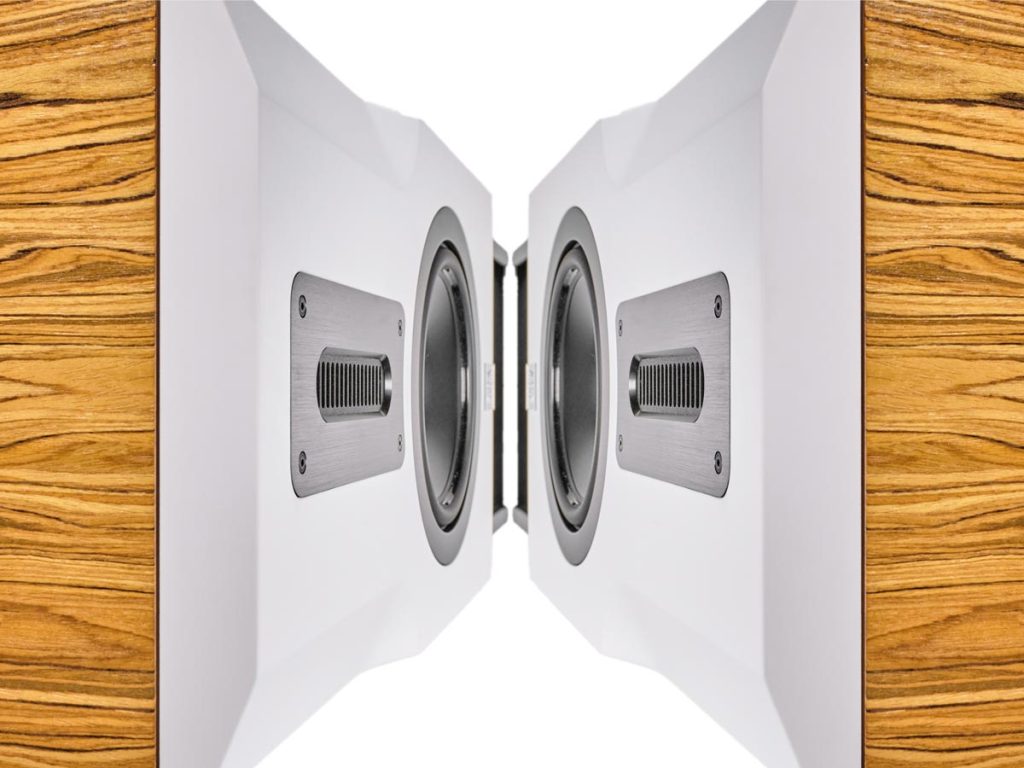 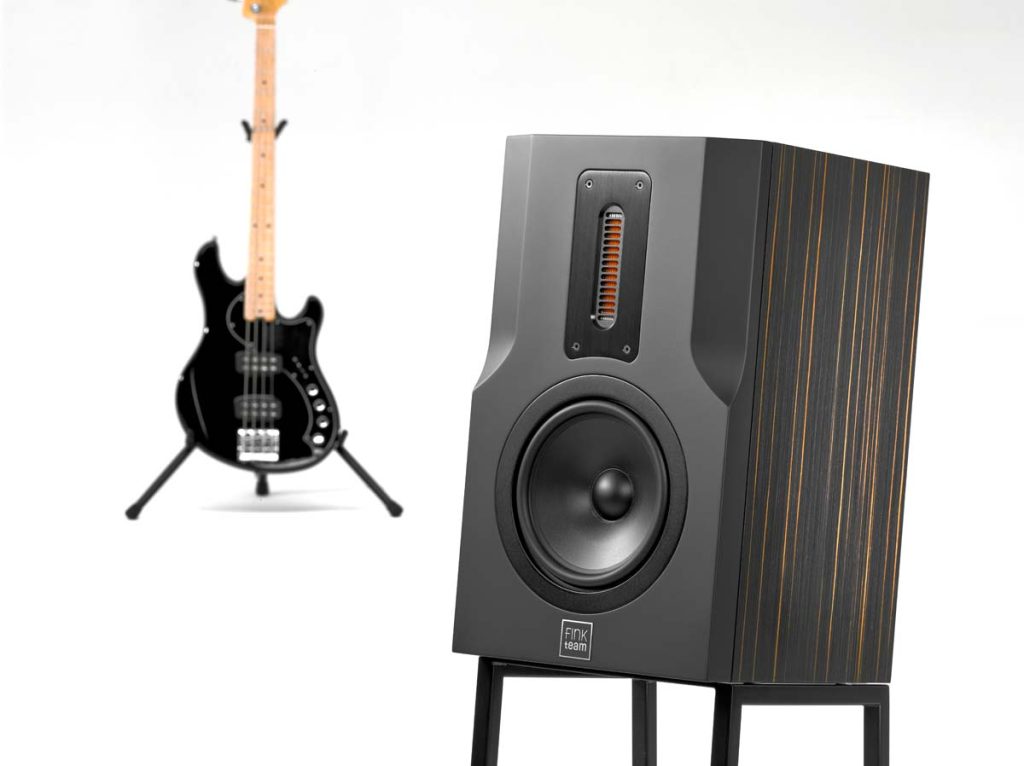 I admit the musical examples mentioned so far are rather heavy going and not exactly fitting for your average lighthearted tea-time get-together. Anyone wanting to experience an opulent display of the aforementioned qualities by the Kim should listen to the outstanding recording of Sergei Rachmaninoff preludes by Boris Giltburg. Magnificently dark with the left-hand notes and breathtakingly masterful with the treble notes, Gilt­burg and the Kim formed such a great partnership that even I, who am usually quick to class Rachmaninoff as a bit of kitsch, listened to his preludes all in one go. As such, FinkTeam’s smallest loudspeaker is now a member of a rather exclusive group of devices that have managed to get me to enjoy music I would ordinarily find to be rather objection­able. It deserves a serious pat on the back because that‘s no mean feat!

But if you extensively listen to your favorite music with an unknown component, you run the risk of becoming very disappointed very quickly because your high expectations might not be met. So, full of anticipation, I placed David Sylvian’s latest album Manafon on the turntable — released shortly before Sylvian went mysteriously quiet, it‘s a peculiar masterpiece that uses experimental guitar sounds and sonorous Sprechgesang. I‘ve listened to this album on many systems and, most notably, with lots of different, very large loudspeakers but never have I felt so convinced that Sylvian was there playing right in front of me, as if the sound was not the result of a technical reproduction. It was actually quite eerie the way his voice from deep within his chest emerged almost out of nowhere yet managed to boom throughout the room.

When it comes to the best choice of amplifier, the Kim really isn’t fussy. A rotary switch on the rear has three settings to enable the user to adjust the loudspeaker to the amplifier’s damping factor. As such, FinkTeam has managed to minimize dependency in terms of the power amplifier section and, thanks to this versatility, both double-digit wattage amps fitted with EL34 or KT88 tubes and exotic vintage amplifiers can be used without any issues. The Kim is not a diva with fancy tastes or fussy diets. Even a run-of-the-mill mainstream heavyweight from the late 1980s can bring out all the playback qualities described above, though admittedly a modern pre/power combo brings out a touch more nuanced detailing and dynamics. That said, there‘s no need to empty your wallet to be satisfied. Even more important for me to point out is the fact the speakers will form a truly symbiotic bond with whatever amplifier is used. In the case of an analog chain with a tube preamplifier, you‘ll instantly detect a certain amount of baby fat in the mid and low frequency range, whereas with neutral amplification the Kim tends to adopt the qualities of a studio monitor.

Teamwork really pays off. A modern loudspeaker construction is not the product of a single mastermind but rather the sum total of the efforts exerted by various creative and highly qualified experts who jointly work together on a project. This exquisite, perfectly formed loudspeaker is proof this is very much the case at FinkTeam. Ensign Kim definitely has the qualities to take command of any listening room. And regardless of which crew is assigned to assist with the mission, the musical journey is bound to take you to new unexplored galaxies.