High-end fans and their sharp ears are always after that little bit extra to try to help satisfy an insatiable ap­petite. Mutec is happy to show them the next step. 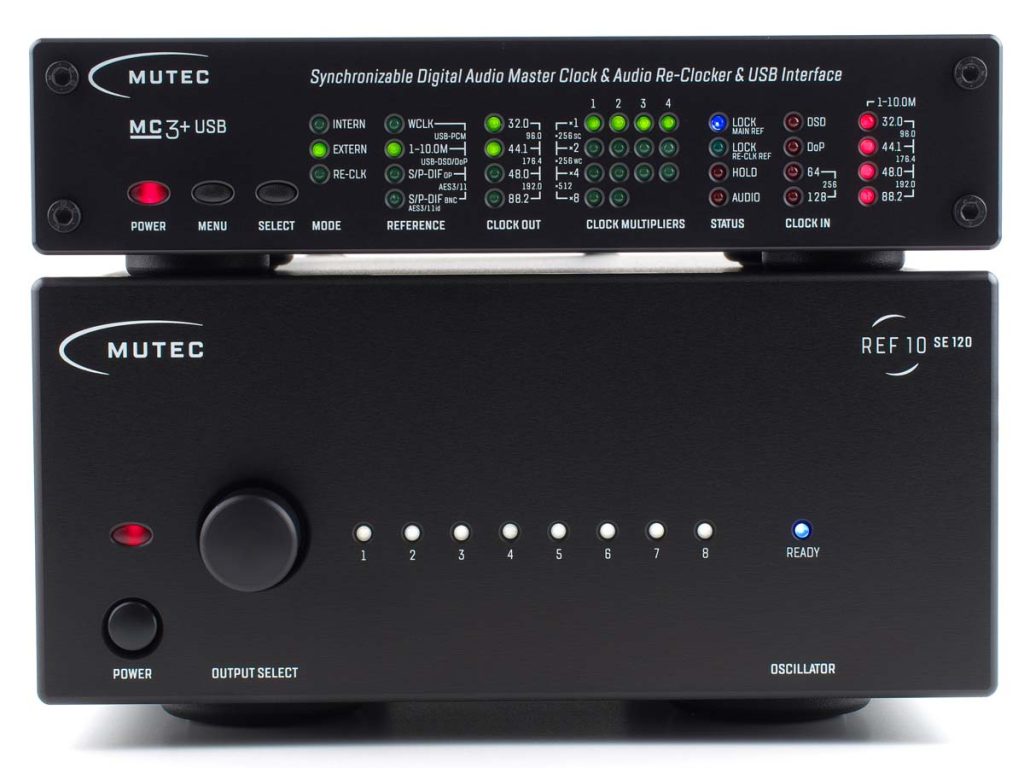 Mutec has enjoyed a solid reputation on the studio scene. Back in mid-2017, the Berlin-based manufac­turer delighted fans of digital high-end devices with the launch of its 10-megahertz benchmark-setting master clock generator, the REF10, and the positive reviews flooded in. And, in fact, the accolades have never stopped. When combined with the superb MC-3+ Smart Clock USB audio interface and reclocker, this hugely impressive device provides lis­teners with a digital music playback experience that leaves nothing to be desired. But let’s face it: High-end fans and their sharp ears are always after that little bit extra to try to help satisfy an insatiable ap­petite. They are constantly chasing the next audio high, which keeps manufacturers on their toes. 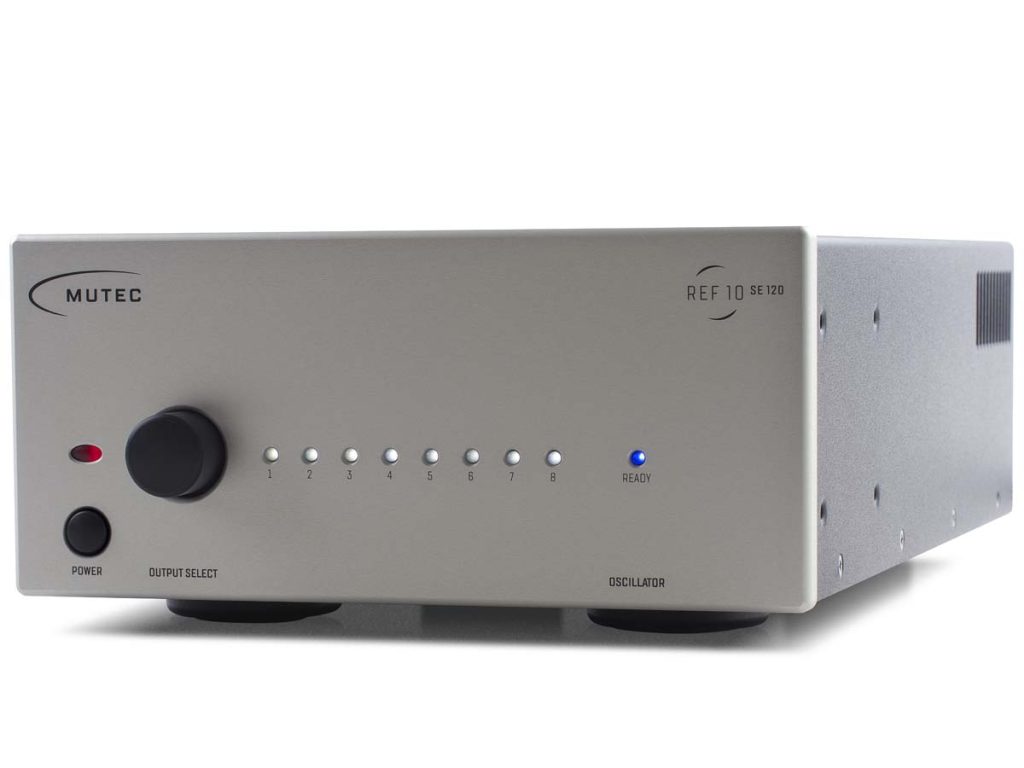 And Mutec mastermind and CEO Christian Peters along with his team of developers are no exception: “Thanks to the incredibly well-de­signed circuitry of our REF10, we were able, when requested, to replace the oscillators in our customers’ devices without restricting the improved performance of the new oscillators in any way,” Peters explains. “This means our customers get to fully enjoy their REF10, which now boasts even better performance.” Mutec customers continue to be thrilled with the modified REF10, so the “logical next step” for the Berlin-based team was to provide the REF10 with a beefed-up big brother in the form of a special edition version. Referred to as the SE120, it boasts a differ­ent oscillator and, after undergoing a series of very extensive tests and measurements, represents the ultimate upgrade for the well-established benchmark-setting master clock generator. And the final price reflects all the additional work that has gone into this sophisticated beast: While the standard REF10 carries a price tag of approximately €3,600, the Mutec REF10 SE120 will set you back a cool €5,500. But, as I quickly discovered, this is wholly justified. 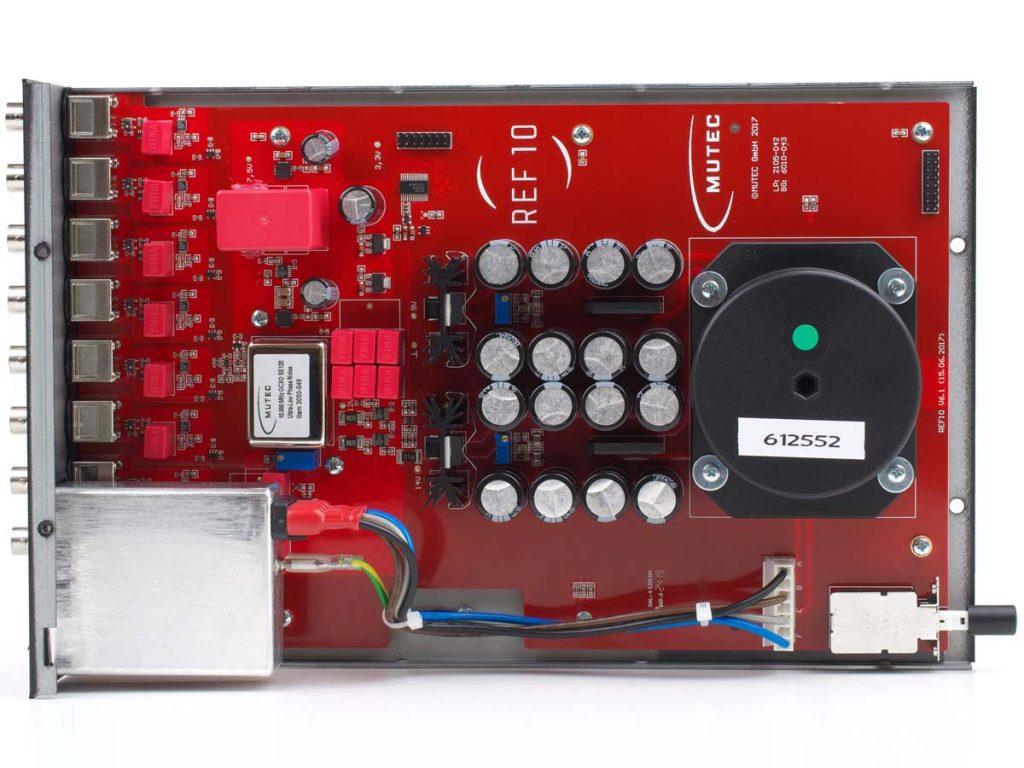 Each REF10 SE120 undergoes extensive testing and measurement. As Peters points out, “The measurements actually take a quite a long time as we’re really pushing boundaries and exploring the limits of what’s tech­nically feasible. We’ve determined the varying load of the power supply that feeds the measurement equipment we use for testing can influence the results.” Consequently, there’s no getting around the need to carry out measurements again and again and to scrutinize, check, and recheck readings in order to ultimately be 100% certain that each and every device is worthy of the REF10 SE120 name.

Every benchmark-setting master clock generator sold under this name comes with an exclusive measurement data sheet that indicates the number of the built-in oscillator, states the device’s serial number, and, of course, contains the detailed measurement diagram that provides all the necessary information regarding the device’s phase noise. The latter is at least -120 decibels relative to the carrier at 1 hertz offset from the carrier frequency of 10 megahertz. This is how the device gets its new name. By way of comparison, the already impressive standard version of the REF10, which, for good reason, is part of Mutec’s Empyreal Class series, features -116 decibels relative to the carrier. The new model does, however, offer much more than the impressive -120 decibels relative to the carrier, as Peters explains: “In the crucial 10 to 100 hertz range, the new oscillators achieve better readings than the standard oscillator.” This means a jitter value in the 1 to 100 hertz range with an average reading of less than 15 femtoseconds is significantly lower than the standard oscillator with its less than 22 femtoseconds (fs). To pull this all together and put it in context, this kind of jitter value is currently unparalleled and unrivaled anywhere in the world. 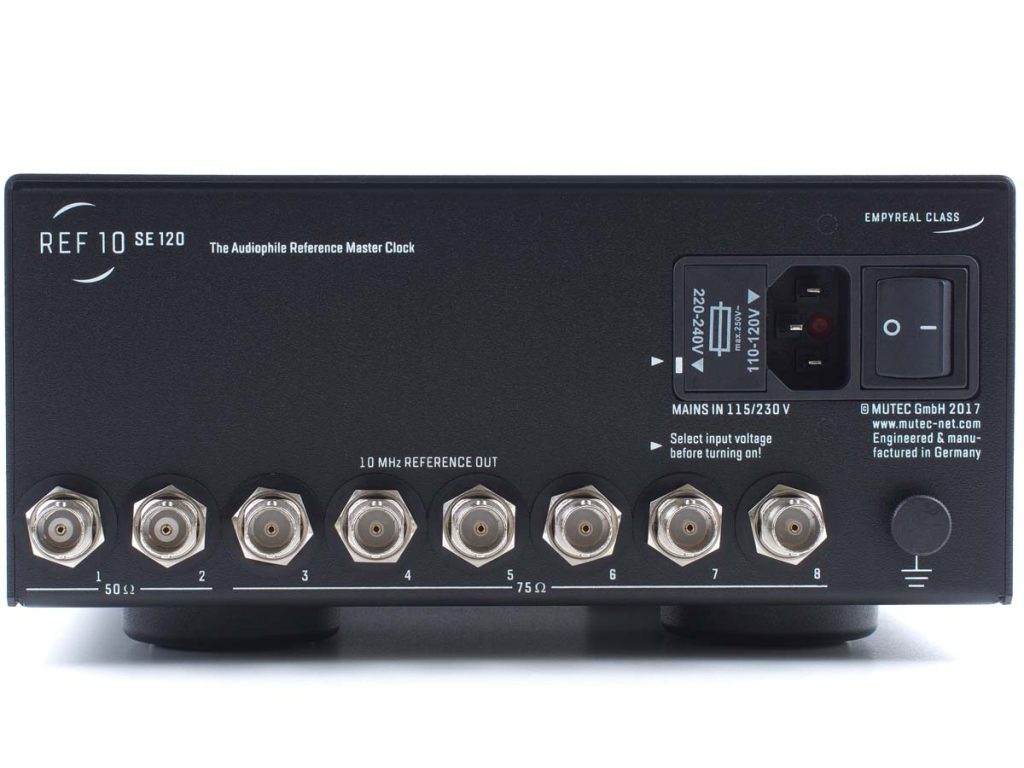 This means that phase noise and jitter, which are notorious for having an undesirable negative impact on sound quality in otherwise fantastic digital audio settings, satisfyingly don’t show up, even for a moment, with the REF10 SE120.

Other than that, the Mutec REF10 SE120 is very similar to its brother in that it’s beautifully put together and boasts some seriously impressive craftsmanship. Thanks to the tried-and-tested, high-quality signal distributor and driver circuitry combined with voltage supplies, which are optimized to ensure they’re exceptionally low-noise even in the sub-hertz range, transportation of the clock signal to all eight galvanically isolated outputs is completely lossless. Outputs 1 and 2 have a 50-ohm terminal for connecting consumer devices whereas outputs 3 to 8 have a studio-standard 75-ohm terminal. All eight can be used simultaneously, but the connected devices must be designed to receive a 10-megahertz reference clock signal. The Mutec MC-3+ Smart Clock (with or without USB interface) is, of course, the preferred choice and the perfect candidate.

Once the connection has been established with a BNC cable, operating the REF10 SE120 couldn’t be easier: After the power button has been pressed, the corresponding LED lights up red and the crystal oscillator’s oven starts to warm up. Once the bright blue “READY” LED comes on and stays on, the operating temperature has been reached. It’s actually worth giving the REF10 SE120 another half hour at this point as this will ensure the oscillator is fully warmed through, thereby guaranteeing maximum frequency stability. Any outputs that are not needed should be deactivated using the large, easy-to-use push/rotary encoder knob. 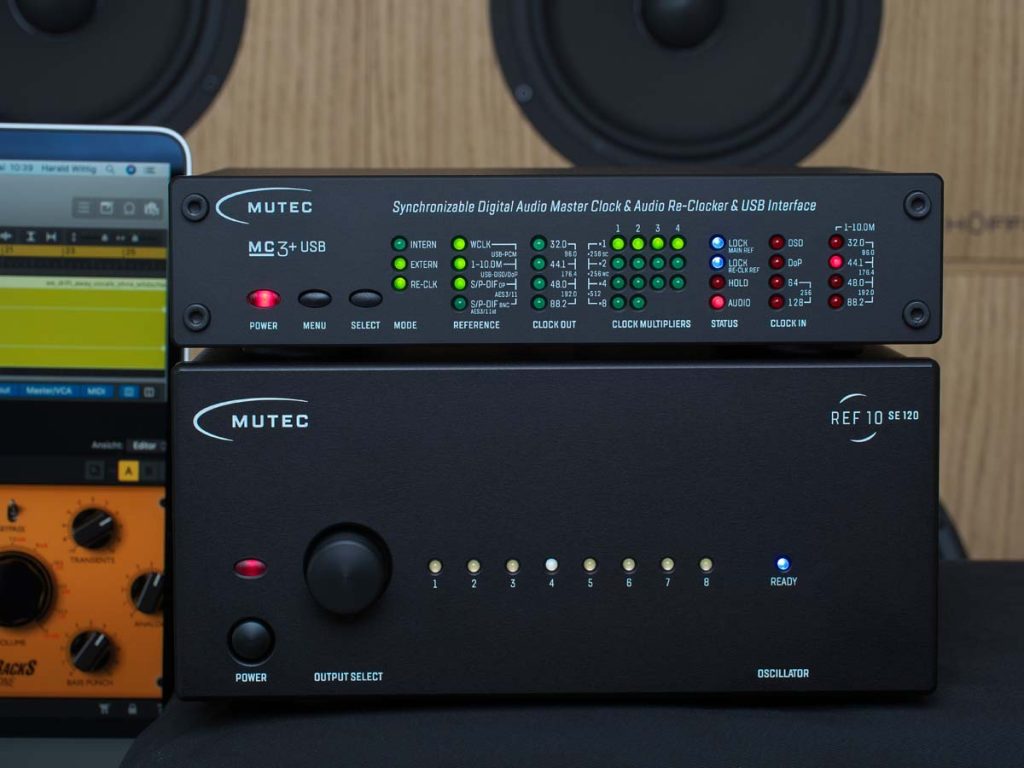 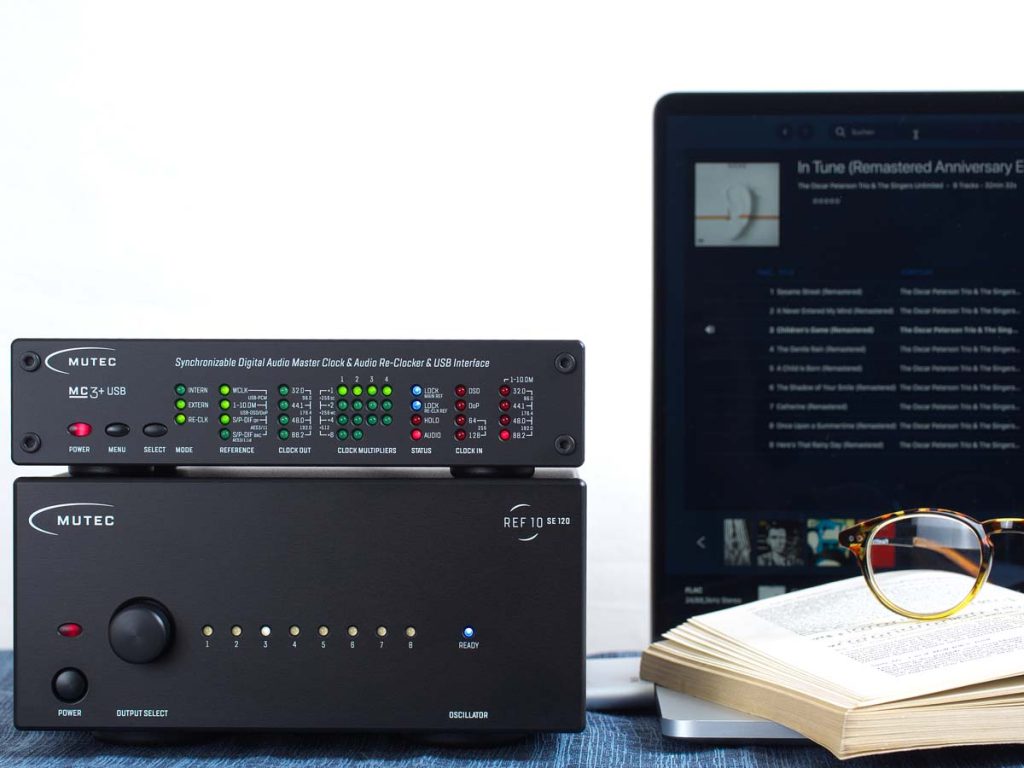 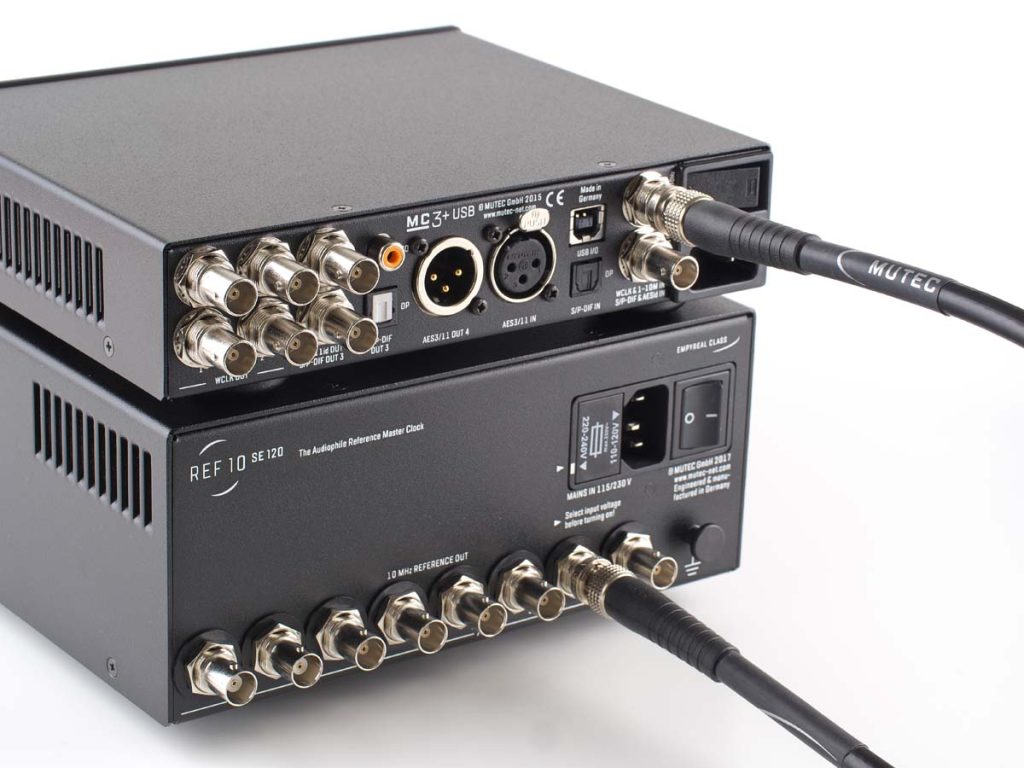 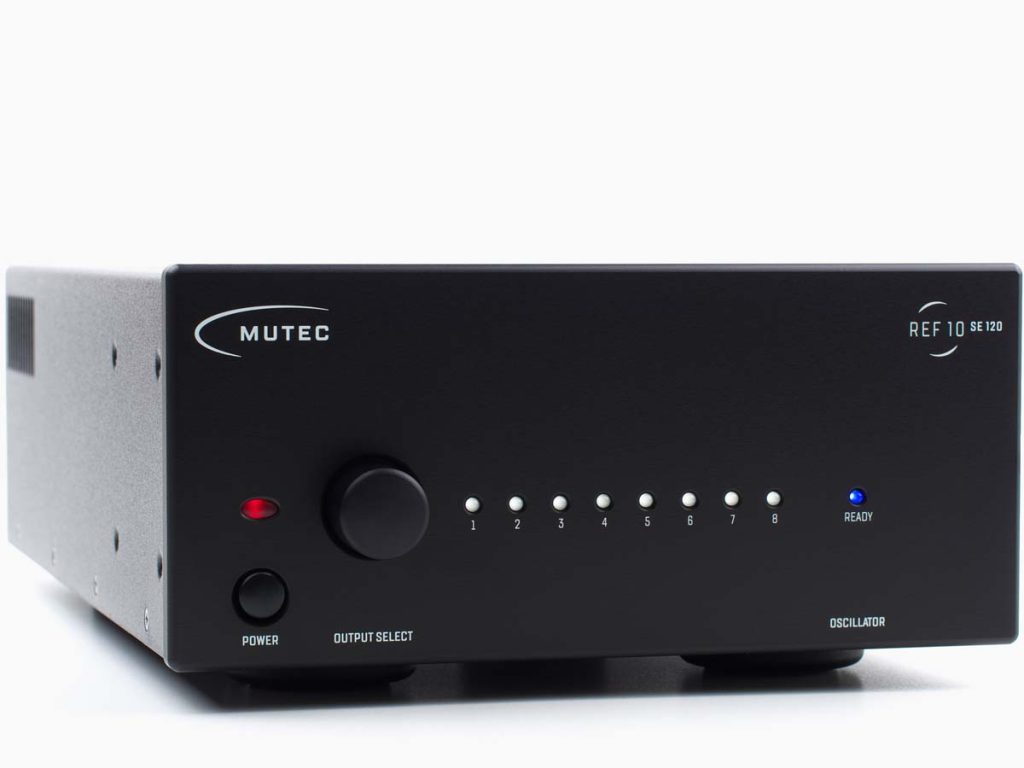 From night to day

The Mutec MC-3+USB has been numero uno and calling all the shots in my computer-based studio for three and a half years now. I use it as a monitoring device as part of my own projects and simply for lis­tening to music in conjunction with the outstanding Audirvana playback software. When I tested the REF10 back in 2017, it really knocked my socks off, so I was excited to see what the über-optimized special edition version could pull off. I really wanted to put the duo of audio devices through their paces, so I decided to kick things off with The Oscar Peter­son Trio and The Singers Unlimited and their magical version of “Here’s That Rainy Day” (from the flawless MPS Records production In Tune).

While the MC-3+USB was set to “Intern,” it sounded just like it usually does: At 0:33, right after Peterson’s inspired intro, the voices of The Singers Unlimited swept in and demonstrated the artists’ ability to achieve the tightest of harmonies. Anyone who fails to cry from the sheer joy at hearing this type of musical perfection is probably the kind of person who refers to The Rolling Stones’ frontman as a “singer.” I set the MC-3+USB to “Extern,” skipped back, and pressed “PLAY” — I couldn’t believe my ears. It sounded practically like a completely differ­ent arrangement. The breadth and depth scaling developed a holographic quality and the separation of the deep voices was improved thanks to a distinctively audible increase in precision and definition. At the same time, the sound grew softer and more rounded and managed to shake off that last little bit of digital harshness I had still felt was present even with the remastered 24-bit/88-kilohertz version. Then, as Peterson caressed the Steinway, the MC-3+USB plus Mutec REF10 SE120 dream team reproduced the transients perfectly, proving they are a real force to be reckoned with.

When I combined the Mutec Tower of Power with the Audiodata MS II music server and selected the 24-bit/192-kilohertz high-resolution version of the immensely popular and ever-impressive classic track “Yours Is No Disgrace” from The Yes Album, which never seems to grow old, the whole thing sounded as crisp and as fresh as a spring morning. This is exactly how digital audio should sound, with all the zeros and ones in perfect formation. All the digitally encoded information was decoded, producing the most wonderful sound quality. The optimized music playback achieved thanks to the expertise and skills demonstrated by the SE120 created a shift in the space-time continuum. When I found myself still sitting in front of the system the following morning, I had enjoyed a full 10 high-res albums and was still wide awake. I tip my hat to the impressive REF10. It’s a prime example of how exceptional engineer­ing can produce top-quality music playback — and turn night into day — at the flick of a switch.