The Voice Of Reason

Of course, you can invest vast sums to buy devices with a lot of philosophical, but meager technical background. You can also simply buy these NAD amplifiers. Could these be a way out? 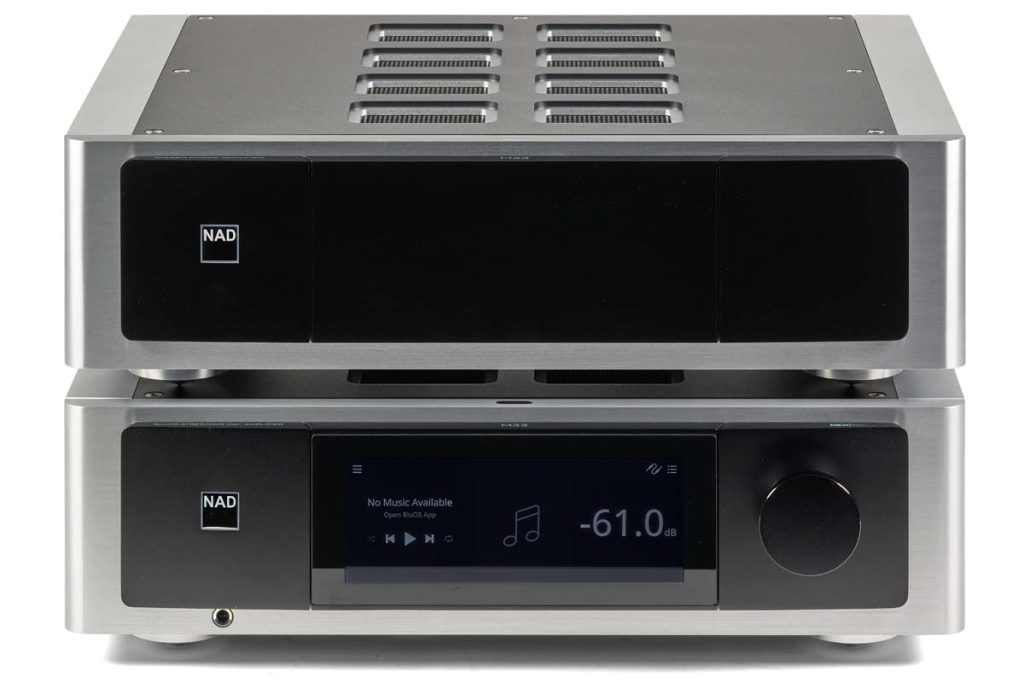 My audiophile socialization began in the early eighties. As a schoolboy, I built my first loudspeakers together with friends, which, in retrospect, put me to shame. Well, they looked hideous and sounded quite accordingly, but at least I had dealt with the basics. Later, when I was working in a hi-fi store, things got going, names like Infinity, Nakamichi or Conrad Johnson appeared on my radar. Admittedly, only there and not in my room, because apart from a Nakamichi BX300E I could not afford any of the valuable equipment.

My time at the university in Berlin introduced me to another HiFi scene, which was clearly more British oriented. Here, Infinity Kappa 9a speakers were far less popular than Spendor LS3/5s, and small, quirky integrated amplifiers from the island won the top spots in our hearts. If you were a pragmatic hedonist in this world, i.e. you had to combine the greatest possible musical enjoyment with a student account, you almost inevitably ended up with amplifiers from the NAD company – such as the legendary 3020, which went down in history as the best-selling integrated amplifier in the world. A better price to sound ratio could not be found anywhere, and the rough gray fronts with their simple plastic knobs alone signaled that the owner must really be all about the music.

In addition – and this was also a strong argument in favor of this manufacturer – you could buy a next step on the quality ladder for reasonably cheap, because the power amplifier section was available in a separate enclosure and you could dive into the world of bi-amping. And since these power amps could be made to operate in mono by flipping a switch … you can guess where the story goes from here … 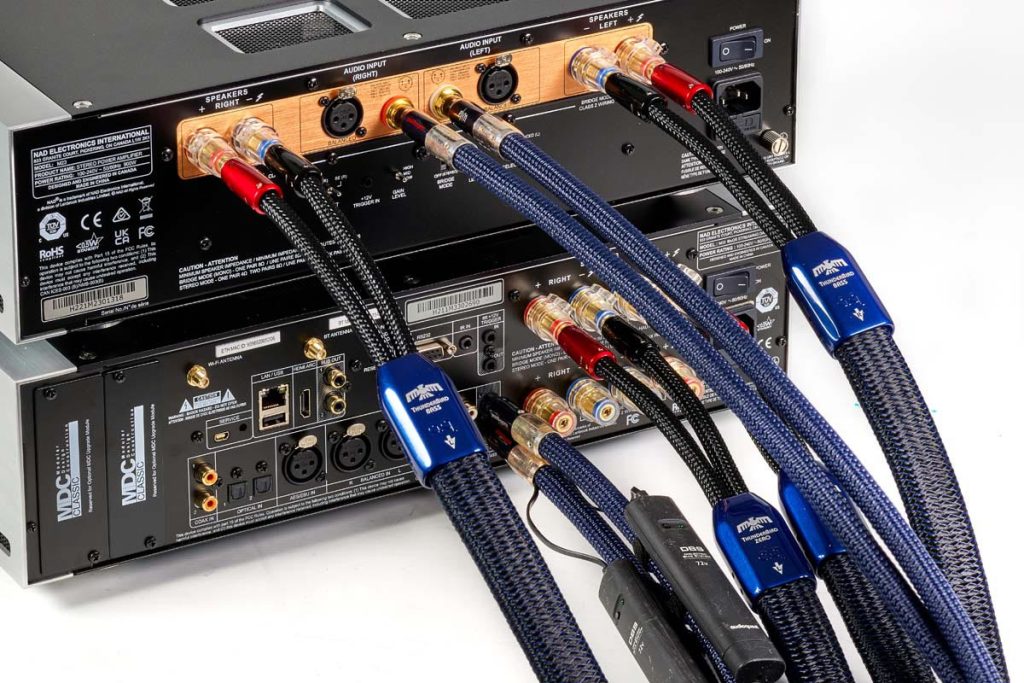 In recent years, NAD has disappeared from my field of vision, bi-amping was now no longer my thing at all, as it also seems to be of little interest in general these days. As to why this is so, I can only guess. Systems should be slim and invisible, the hifi tower has had its heyday. Living room friendliness and usability are at the top of the list. Somehow the scene also seems to have lost the fun of experimenting and tinkering. Who still invests a whole weekend to find out the right documentation for their turntable?

When Mike Besser from the German NAD distributor offered to send us a combination of integrated amplifier and matching power amplifier for listening, our play instinct and curiosity were of course immediately piqued. After all, what used to excite us so much can’t have been fundamentally wrong. Sometimes you simply lose sight of good ideas …

The integrated amplifier in this story goes by the name of NAD M33, and it doesn’t have much in common with its 3020 ancestors. Thick aluminum panels make for a noble home, the amplification is completely digital, a BluOS streaming module is on board, and the price tag is no longer really student-friendly. Well, it is the top model of the house, not one of the entry-level offerings.

However, if you take a closer look at the M33 when unpacking it, you’ll notice a first commonality with the older models: Without a doubt, you have to pay a lot more for a corresponding quality elsewhere. This already starts with the environmentally friendly packaging, which does without cheap styrofoam parts, and is evident in the first-class panel gaps or nice details like the massive feet, which don’t lose their pads because they want to stay together via magnets. 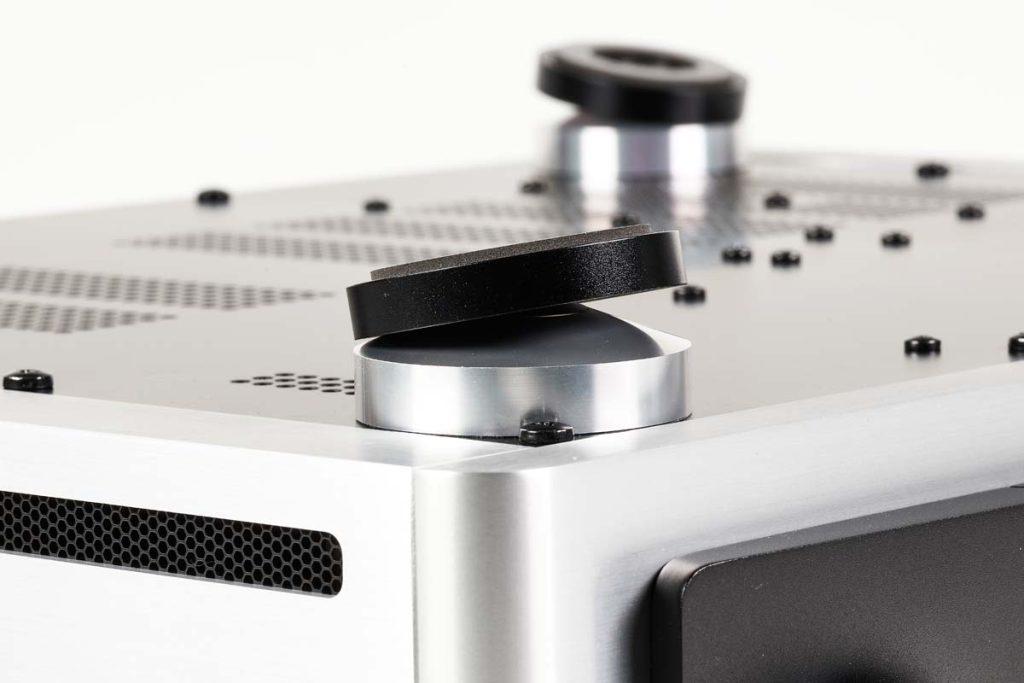 But these are just nice additions that round off the picture of a first-class amplifier. Because the real show happens inside. NAD uses the “Purifi” circuit invented by developers Bruno Putzeys and Lars Risbo to offer a particularly efficient type of negative feedback without its disadvantages known in the hi-fi world. More control, less distortion and yet no static sound image are the characteristics that NAD expects from the implementation of this technology. The corresponding intrinsic clock modules are not purchased there, by the way, but manufactured under license. But that’s not all, the NAD M33 also offers a complete streaming module based on BluOS technology, which is ready for all major providers, including Qobuz and Tidal as well as comprehensive Roon compatibility. Also on board is room calibration functionality. The required microphone is included in the box, and the calibration is easy thanks to detailed documentation. However, we left the amplifier in its “raw state” after briefly trying out the process.

Besides the permanently implemented high-bit DAC with ESS Sabre chips directly behind the inputs, there are two slots that can accommodate expansion modules. Finally, a whopping 260 watts at eight ohms provide enough power in all situations.

We can check off the M23 much faster: It is the outsourced power amp section of the NAD M33, whose input level can also be roughly matched to other playing partners in three steps. The enclosure is – apart from the display and level control, of course – identical to that of the integrated amplifier. 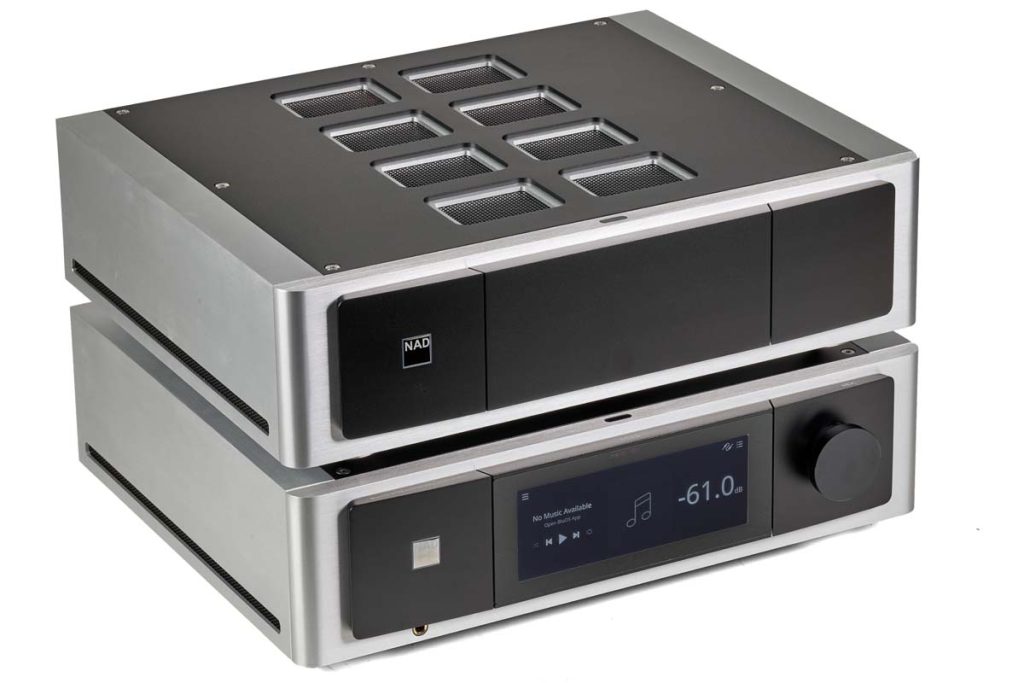 Since NAD is distributed in Germany by DALI, we were able to fulfill our heart’s desire and round off the package with an Epicon 6. This is not only an excellent speaker, but probably also one of the longest serving top speakers, launched in 2008 and actually unchanged inside since then. I know of few transducers that perform with such relaxed cohesiveness. After a little while of moving the furniture, the ideal playing position is found: Only minimally toed out, the DALIs deliver the most coherent image. Furthermore, the speaker is equipped with an outstandingly solid bi-wiring terminal; by the way, for our review we resorted to AudioQuest’s ThunderBird LS (bass and zero) as a connector. That concludes the round-up of all the variables.

As musical “reading” we first chose Fiona Apple’s And When The Pawn. Actually, the title of the album is two hundred words long, but despite Miss Apple’s request, it didn’t fit on the cover. Parallel to the album title, just about everything about this CD is extraordinary, including the wide-spread frequency range of the sounds piled up in the studio. This recording is harassment for loudspeakers and amplifiers with its combination of fragile, rather dryly recorded vocals as well as deepest basses, which together with a bass drum that is also quite punch-tuned, demand quite a bit of power from the amplifier – usually with the result of the vocals losing focus. With the NAD M33 alone, this is not a problem, it has enough reserves to guide the Epicon 6 through these cliffs. The soundstage is very wide, rather broad than deep, the bass rolls mightily, the voice remains insistent. The present colleague Barnbeck and I would not have expected this, and we are now curious whether the switch to bi-amping can make things even better. After all, everything seems in perfectly fine order so far…

To make a long story short: Yes, the step is audible. To such an extent that the price for the external power amp is quickly forgotten. All actions in the low regions now come across a bit slimmer, but much more controlled, with a sharper edge in the transients, and at the same time seem to reach down a bit deeper. The voice now detaches itself from the high-pitched instruments, standing clearly in front of them. In general, the room opens up in all directions, especially the depth has gained enormously. All sound events are now clearly separated from each other, neatly placed in a wide, yet coherent picture. 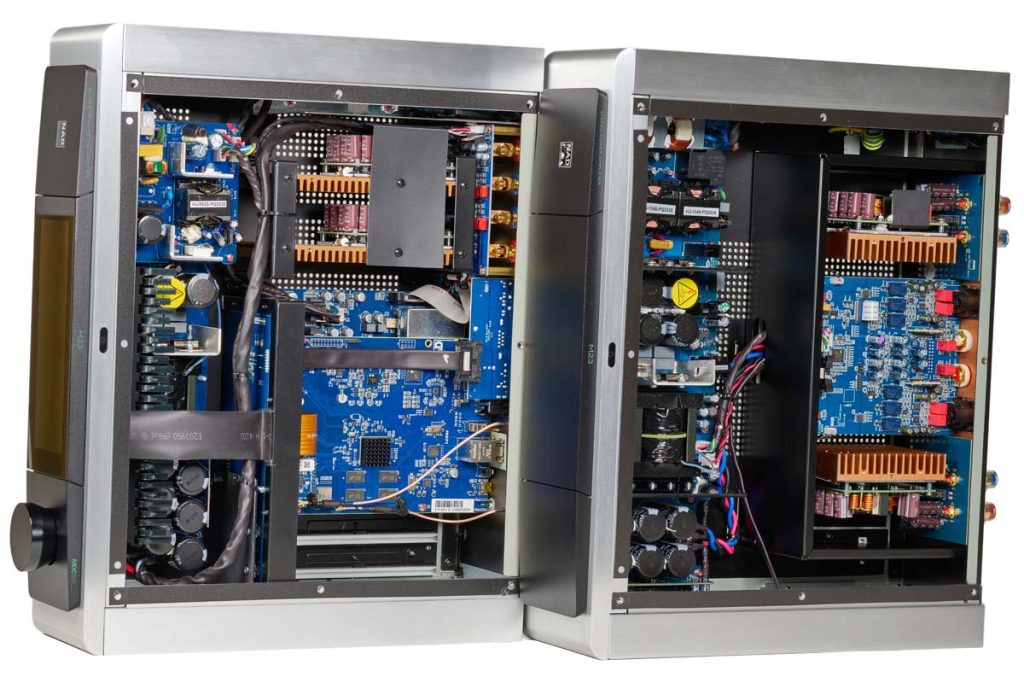 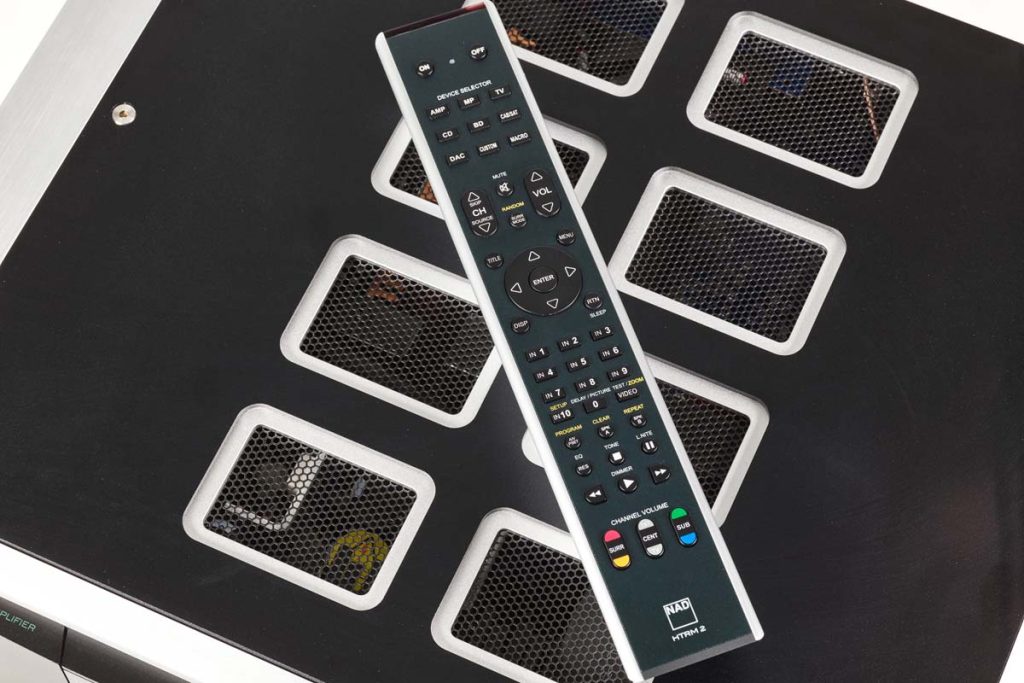 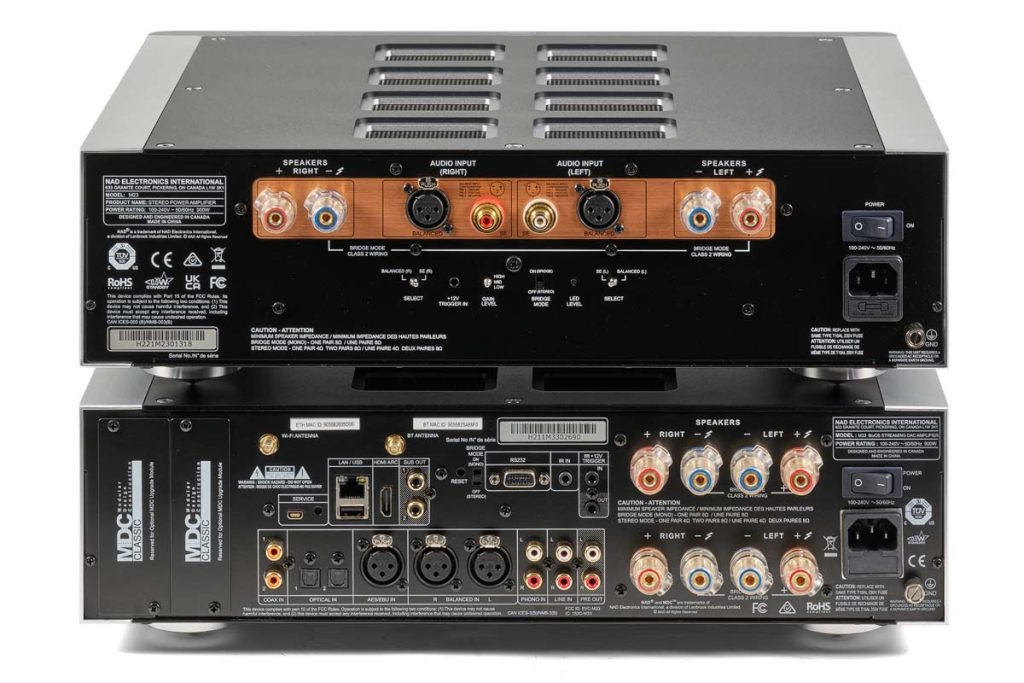 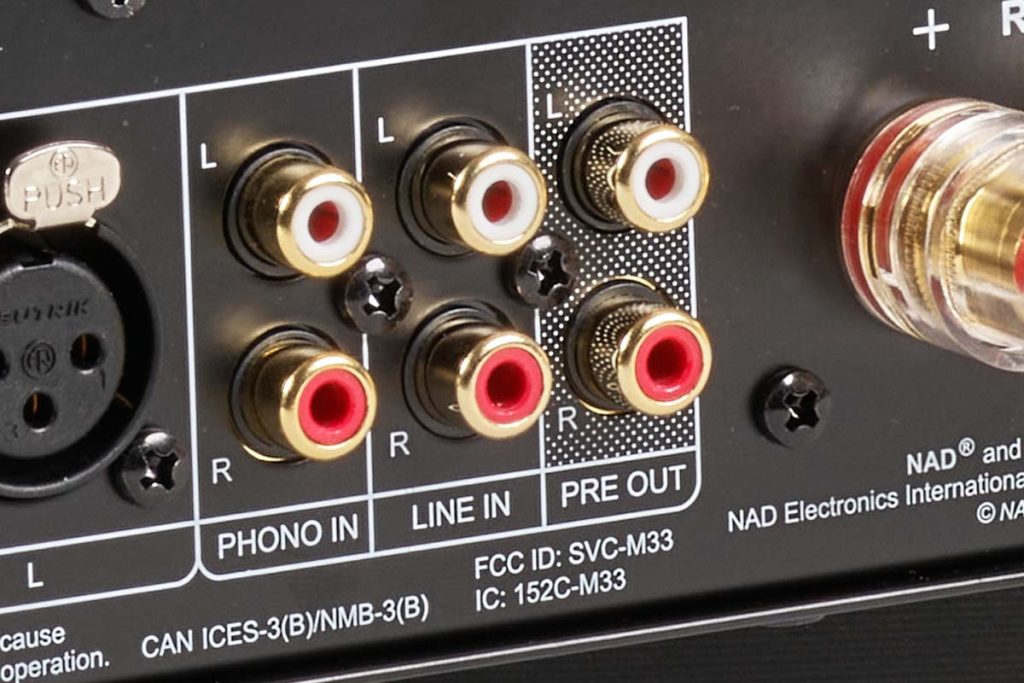 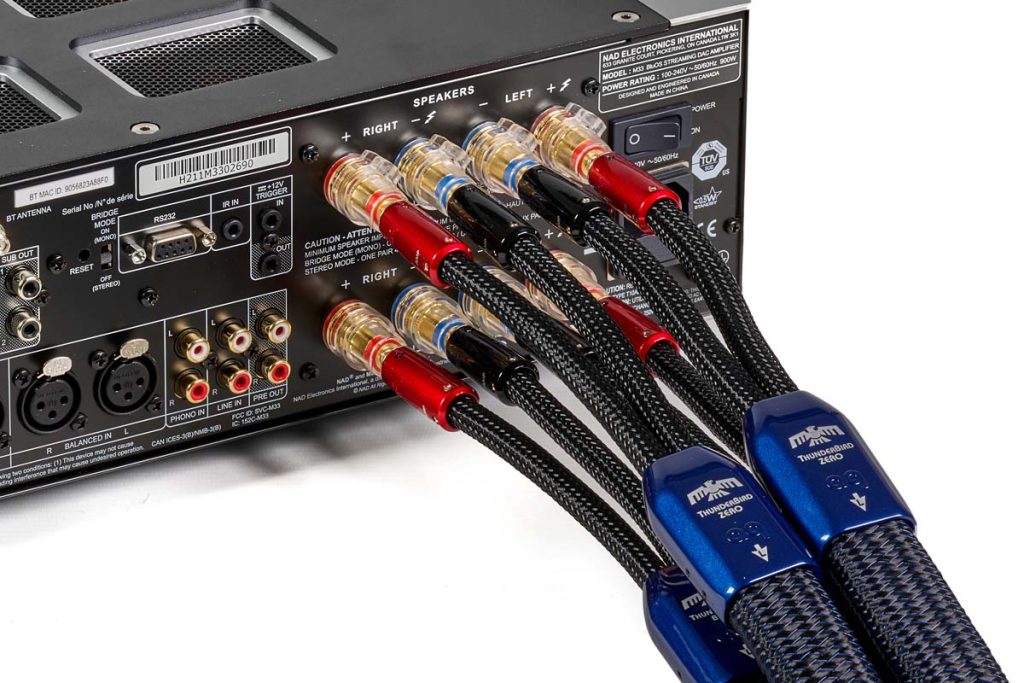 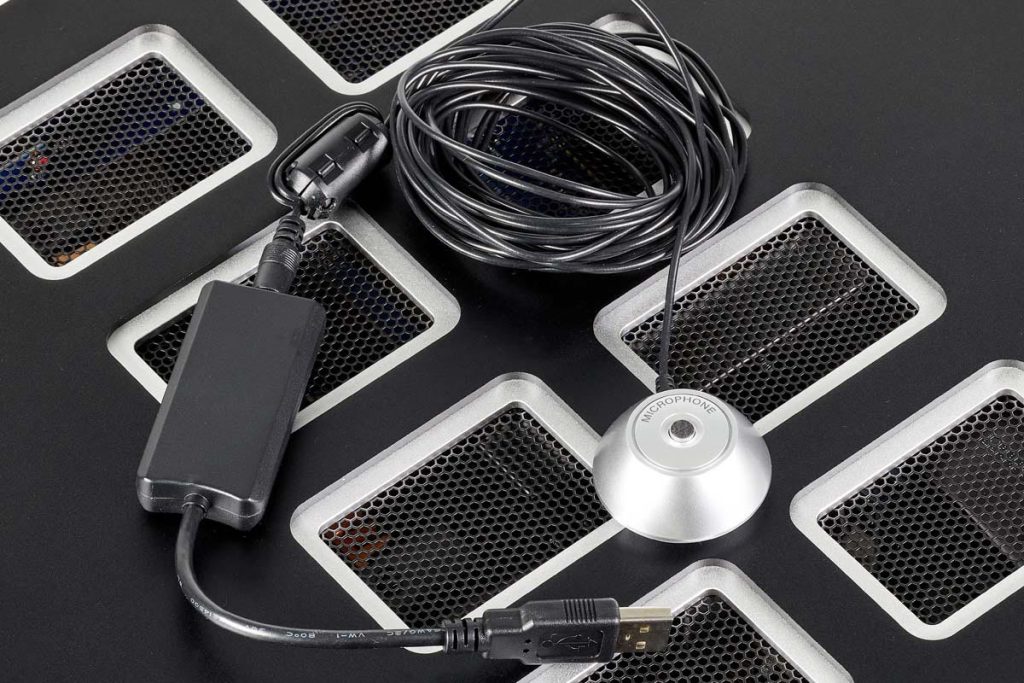 We continue with Richard Wagner’s Parsifal in a concert recording from the Vienna State Opera under Christian Thielemann. Here we see the same picture, the NAD M33 alone actually provides satisfaction – orchestra and stage can be heard differentiated, even the playing noises on stage are well integrated. We suspect what is about to happen, and that’s exactly what we get: The image expands in all directions, extends beyond the speaker base to the right and left, especially the depth gains once more, and at the same time we now experience an increased calmness and solidity in the sound, even in more intense passages. This has nothing to do with boredom, but in fact with an increased overview. It seems like looking through a camera whose lens is now finally properly focused. Now there is really nothing standing in the way of the tension inherent in the music.

Somehow, listening to this review was a trip back to the days when people were still intensively concerned with systems and didn’t just see more expensive equipment as the solution to all problems. With this coherent bi-amping concept, NAD makes it possible to build up a system step by step, growing with the growing needs. Without having to constantly sell equipment. Actually, I wanted to avoid the word “sustainability”. But it applies. One of the smartest amplifier solutions you can buy today.