Professional musician Stefan Gawlick travels the world and knows almost every major concert hall around the globe. In this series, he reports on the acoustics and other characteristics of famous venues both in the auditorium and on stage. Up now: The Philharmonie de Paris.

After Beijing (see FIDELITY international No. 07), it seems another spaceship has now landed in Paris. The new philharmonic hall looks like it had been sent hurtling through outer space only to then touch down on the Cité de la Musique grounds and come to a rest between old indoor markets, apartment buildings, and the Périphérique. Regardless from which side you approach the futuristic building, it always looks magnificent, mysterious, fascinating, disturbing — and as if it’s from another world. But that’s what great architecture is all about.

A downside to the hall though — just to start things off with my pet peeves — is its surroundings. Sadly, there aren’t as many good restaurants here as there are in other arrondissements of the French capital. Guest performances in the Salle Pleyel, the Théâtre des Champs-Elysées, and the Opéra Bastille are altogether more joyous affairs from a culinary perspective.

Musicians enter the Philharmonie’s complex through a standard side entrance and have to undergo various security checks, much like those you find at airports these days. The corridors behind the stage are expansive, confusing, and still only partially signposted — but at some point you eventually manage to make your way to the stage area. The backstage area has a huge amount of space for instrument cases, spare parts, and beverages as well as for the offstage musicians, instruments, and singers. Any annoyances are, however, quickly forgotten once you step out onto the stage. This softly floating, round, playful room is truly awe-inspiring and will take your breath away the moment you first set eyes on it. Too many materials, colors, and shapes clash here, however.

When we played in the Philharmonie de Paris for the first time back in May 2015, it hadn’t been open very long. The Philharmonie had been hit by some construction delays (a problem that hasn’t just plagued Berlin or Hamburg), and work was finished as quickly as possible following orders issued from the top — and with precisely the consequences you might imagine. The ceiling-mounted lighting wasn’t the LED spotlights that have since been installed, but rather conventional lights that made the stage area unbearably hot. Even the stage machinery still wasn’t fully ready: Individual stage elements had simply been screwed into the framework, and it still wasn’t possible to adjust the height of the stage. The whole construction was so unstable that every time I played the timpani just a bit louder, the mouthpieces of my brass-playing colleagues jiggled out of their mouths. That issue has been consigned to the history books as well, and now everything works just as it should. 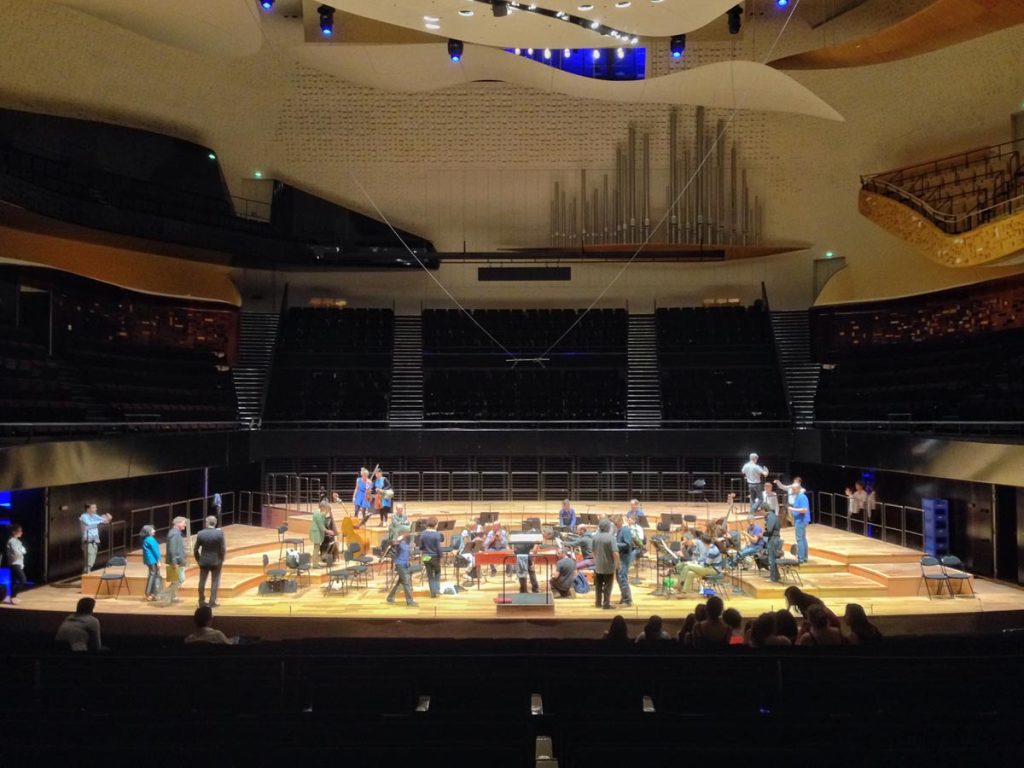 The sound produced in this hall is nothing short of spellbinding. Just like its shape, the hall’s sound is unusual and not what you’re accustomed to as a musician. Typically, you hear reverberation emanating from the depths of the room. This makes its way back to the stage from the rear wall, which usually means you can get a real understanding of how things sound on stage. The mixture in “normal” halls is always more or less the same. Here in Paris, it truly depends on where you’re sitting on stage as the irregular shapes in the room reflect differently weighted information back to those on stage. For musicians, this is both confusing and thrilling at the same time. The hall’s sound is quintessentially transparent but not as easy to dissect as in the Elbphilharmonie. The Philharmonie de Paris audience is served a solid, modern mixture of sound that may not generate the feel-good style of Amsterdam or Vienna, but does, as a result, create a more universal sound that doesn’t immediately throw in the towel on the acoustics, even with a Shostakovich piece.

Music tips | Recordings with characteristic concert-hall sound: Recordings from the Philharmonie de Paris are very rare as SFR never, or only very rarely, cooperates with labels. The resident Orchestre National de France (ONF) is also not exactly one of the top recording orchestras.