When old friends make an old wish come true, the result can only be special: PS Audio Aspen FR30. A loudspeaker? From PS Audio? Aren’t those the guys with the power filters and amplifiers? That’s kind of what I’ve been hearing a lot lately when I’ve been telling people that I’d soon be turning my attention to the PS Audio Aspen FR30, the company’s new speaker. At first glance that’s probably true, and given the company’s current history, at second second glance as well, so it’s forgivable to be surprised. But if you dig deeper (or are older), you quickly realize that Paul McGowan, founder and mastermind of PS Audio, is actually far from being a blank slate when it comes to loudspeakers. Anyone still remembers Genesis Audio? Exactly!

His old friend from those days, the loudspeaker guru Arnie Nudell, expressed his wish a few years ago to tackle the subject of loudspeakers once again. He still liked his old creatures, but dreamed of how much further he could get with his ideas with the possibilities of today’s evaluation and material research. He had the ideas, Paul McGowan had a high-end forge, and so the idea got legs. It is devastating that Arnie Nudell did not live to see the completion of his FR30, he died a few years ago and could not complete the now six years of development of his last loudspeaker. Paul McGowan, who did not want to let the legacy gather dust in the lab half-finished, set out to find a speaker designer worthy of this project. In Chris Brunhaver, he found a loudspeaker fanatic, who, just in his mid-thirties, not only has profound knowledge, but who also shows an amazingly large intersection with Arnie Nudell in his general views on loudspeakers. If you are old enough and know the Genesis loudspeakers, which at that time – at least for me – were as desirable as they were unattainable, the driver arrangement will not take you by surprise, but the general shape of the loudspeaker will. Traditionally, these speakers were always more massive at the bottom than at the top, where they often tapered off. The Aspen FR30 looks exactly the opposite: The speaker cabinet, elegantly rounded off at the bottom, rests on a comparatively filigree base but remains solid towards the top. Arnie Nudell’s design language can confidently be called revolutionary. The drivers themselves, however, do come as a small surprise: midrange and treble are handled by ribbons, while another tweeter on the back provides some atmosphere.

As already mentioned, Nudell wanted to put his engineering chops to the test once more, and Paul McGowan isn’t one to simply compile tried-and-true solutions either, and so in the development of the FR30, no stone was left unturned, already existing speaker concepts were questioned and rethought. Specifically, this means that all drivers were developed from scratch and in-house, only the series production was ultimately entrusted to competent hands.

It all started with the tweeter. Here, the developers quickly realized that the market offered nothing that could combine speed, low compression and low coloration to the same extent. Ultimately, they were looking for the speed of an electrostat combined with the grippy dynamics of a dome tweeter. Not that I’ve never heard this desire before … For Nudell, the way to get there lies in a ribbon, as it has for years, but now, thanks to new foils and better magnets, as well as more precise manufacturing methods, he was able to push it to the extreme. According to the same specifications, a midrange driver measuring ten inches diagonally was created, which should pull the same qualities into lower frequency ranges. 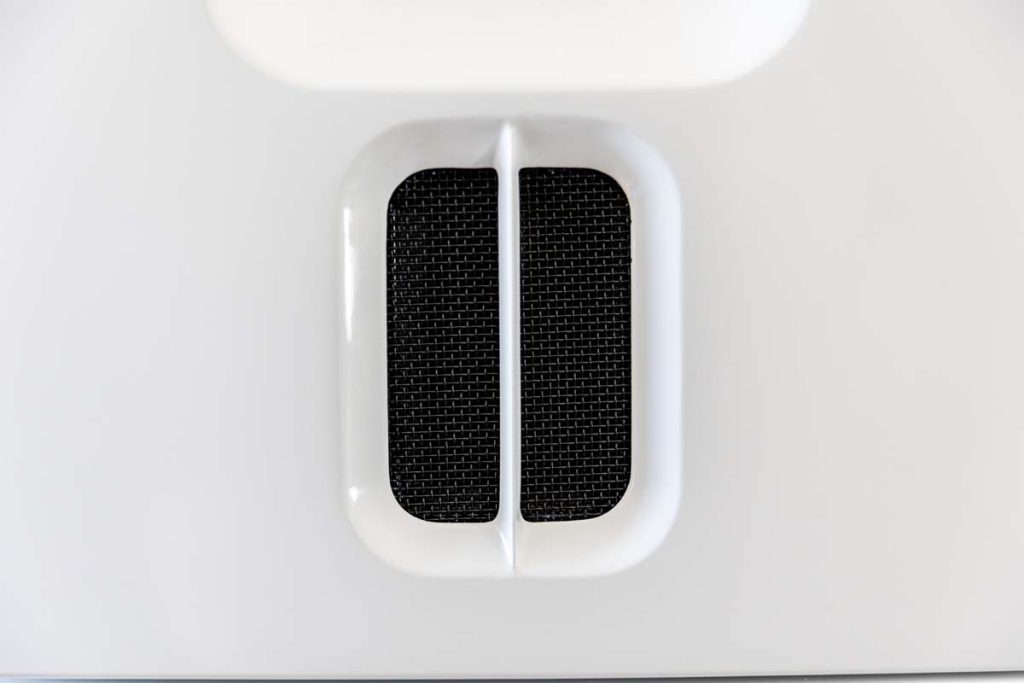 The problem with such a design, however, are always the low frequencies. As beautiful as the airy, weightless and impossibly fast highs and mids may seem – what’s the point of it all if the bass lags behind comparatively ponderously and thus derails the entire presentation? Usually, the problem is tackled by using an active bass, but in this case, a different approach has been chosen. Since the individual drivers should not waste time with too long a stroke, four likewise newly developed woofers equipped with substantial drives sit in each box. The developers deemed twenty centimeters in diameter to be a good compromise between still sufficiently low diaphragm weight yet already enough air displacement capability. The drive of each individual chassis alone weighs over six kilograms, which should make it clear that compromises are not necessarily the way of Nudell, Brunhaver and McGowan. In order to provide them with a sufficient amount of spring stiffness and thus reduce the uncontrolled excursion of the diaphragms as much as possible, they opted for a closed cabinet with passive radiators. Admittedly, without the latter it might have been even crisper, but a good part of the intended bandwidth would have been sacrificed on this altar.

The cabinet, which rests on the elegant aluminum base, is made of wood materials that are so intricately painted with ten layers that it could have been any other material by the look of it – these surfaces are simply perfect. The housing for the midrange and tweeter is designed separately, which, according to the sales department, facilitates transport and assembly. However, we are still talking about a loudspeaker that weighs just under 105 kilograms per piece. Dividing the cabinet probably doesn’t make handling easier, but possible in the first place.

In the back of the speaker is the bi-wiring terminal, substantial jumper cables of top notch quality are also supplied, so that nothing stands in the way of operation with only one set of cables. On top sits the rear tweeter, which is responsible for atmosphere and soundstage width. Below it sit two small controls that allow to adjust it to the respective needs (sonic signature of the room and wall distance). 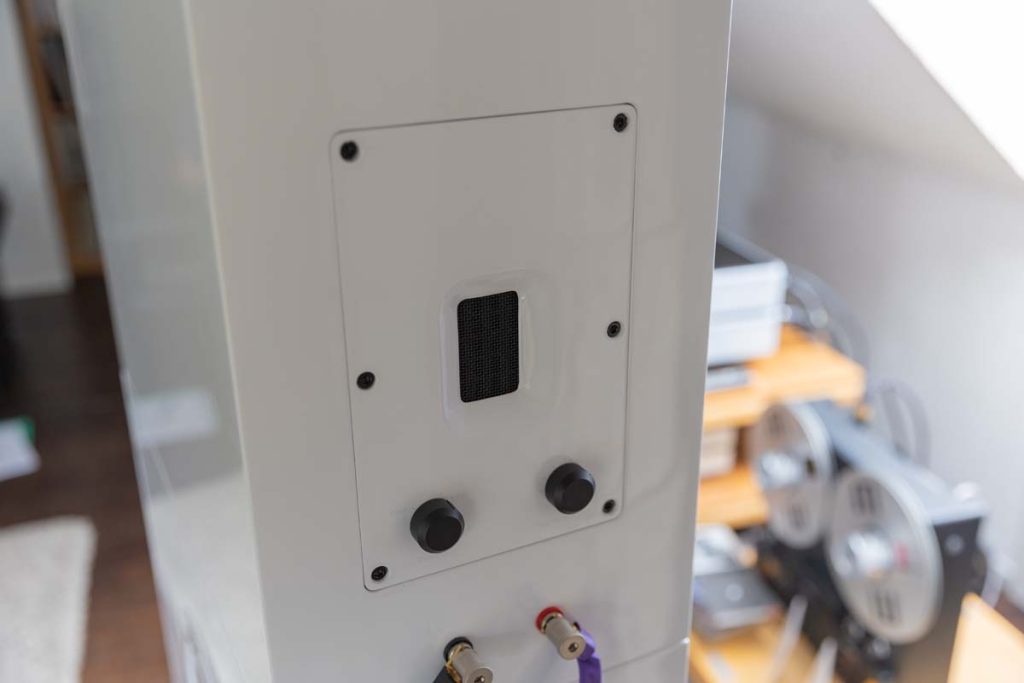 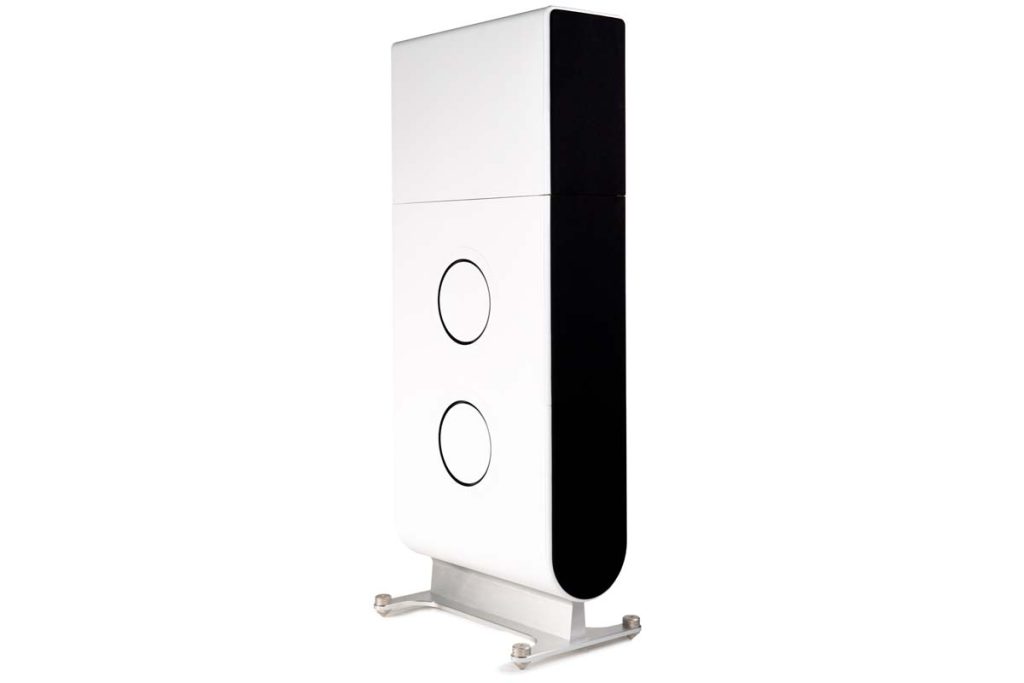 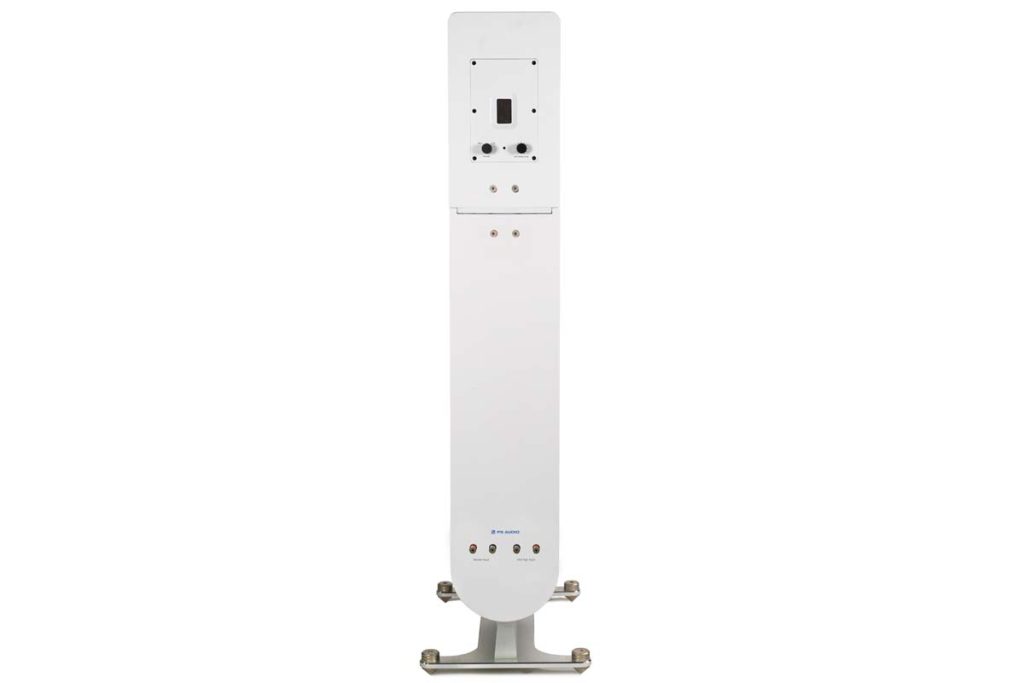 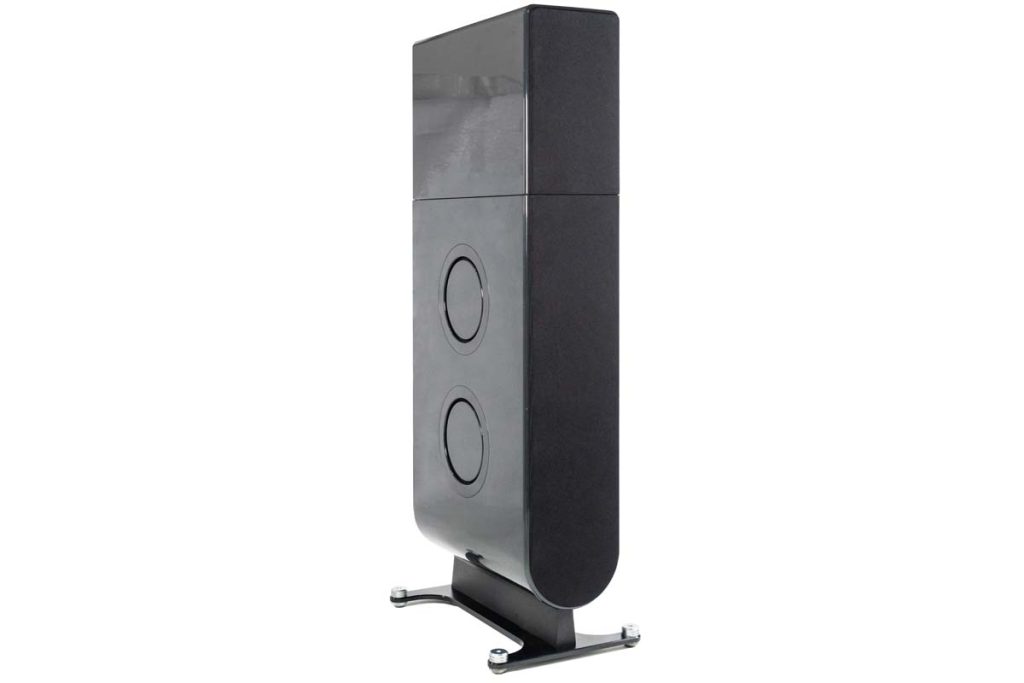 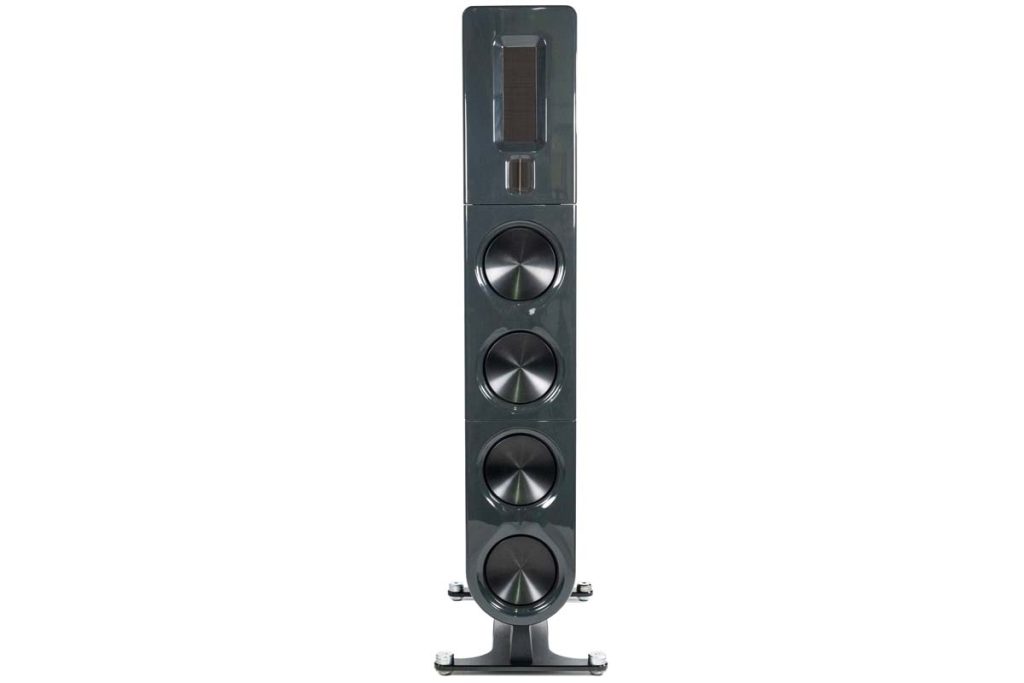 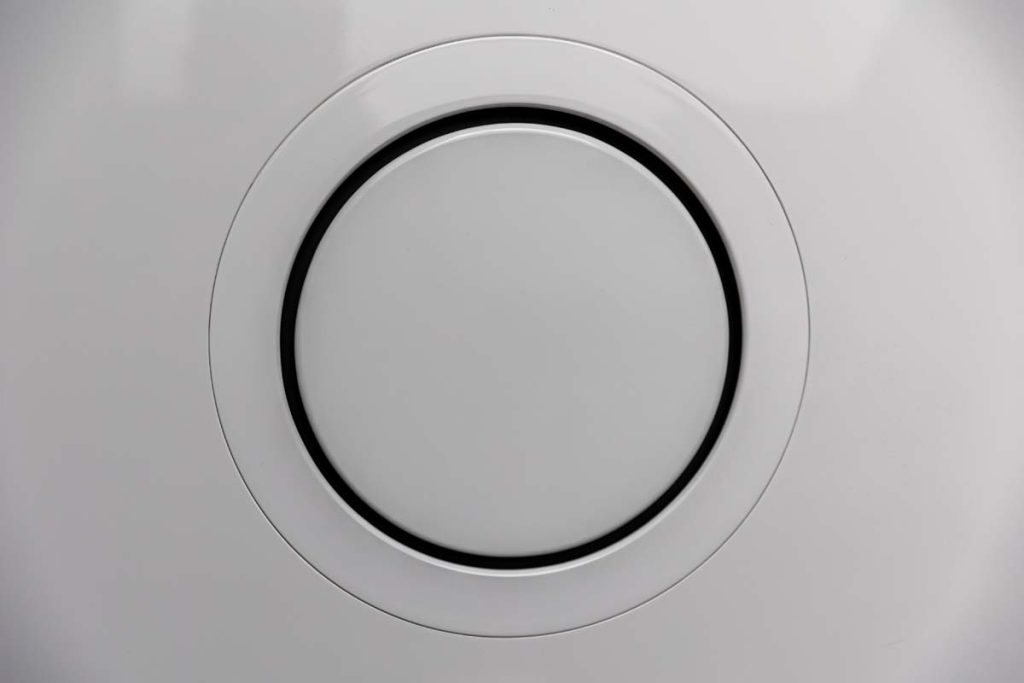 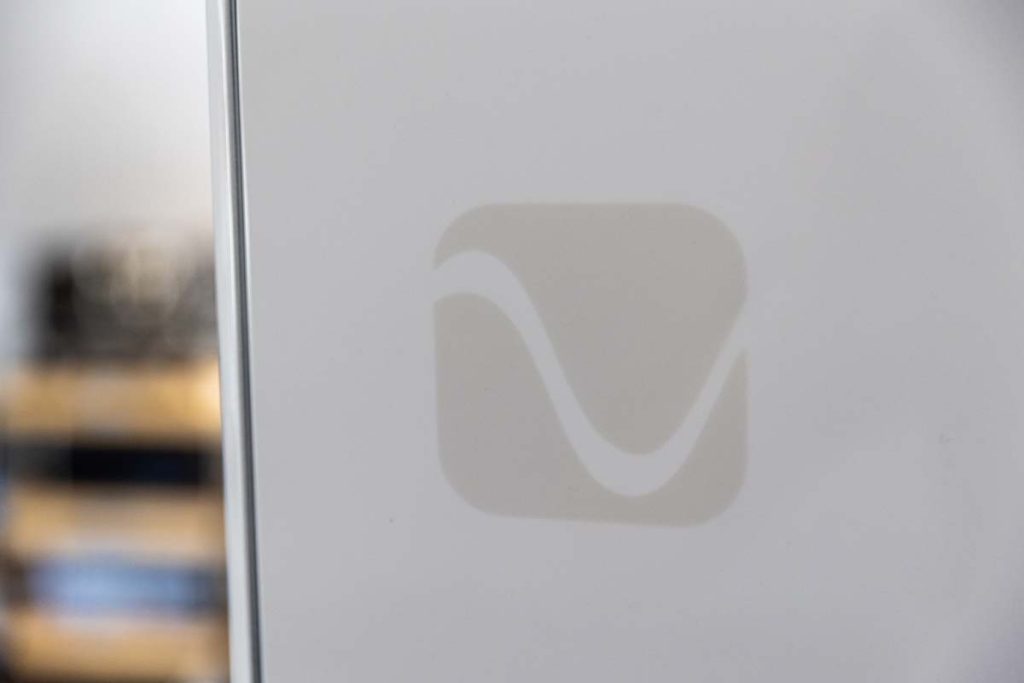 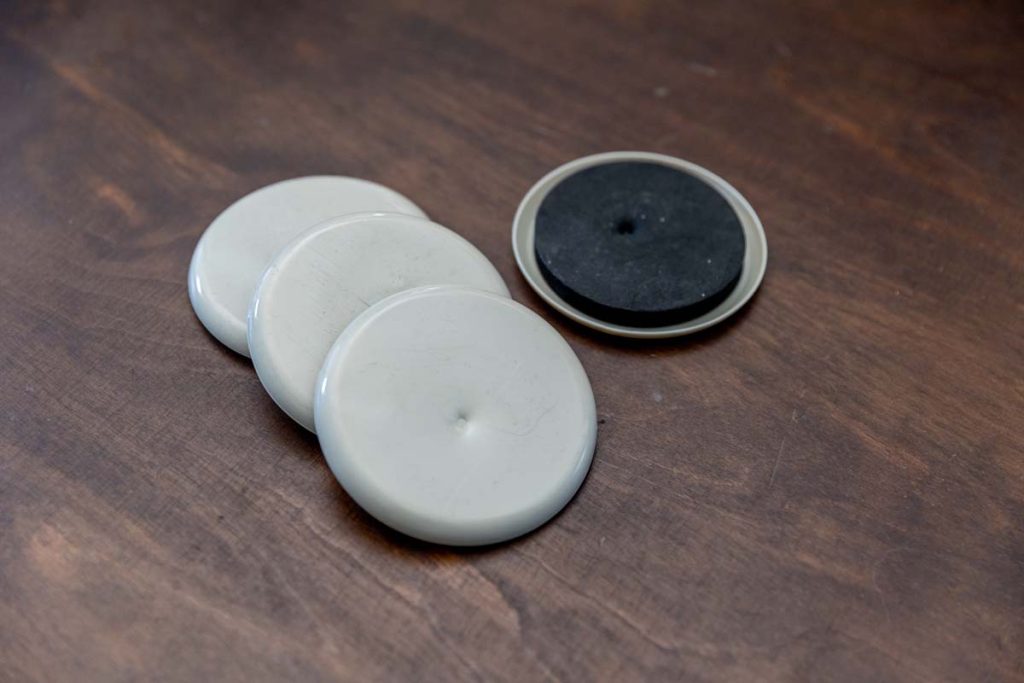 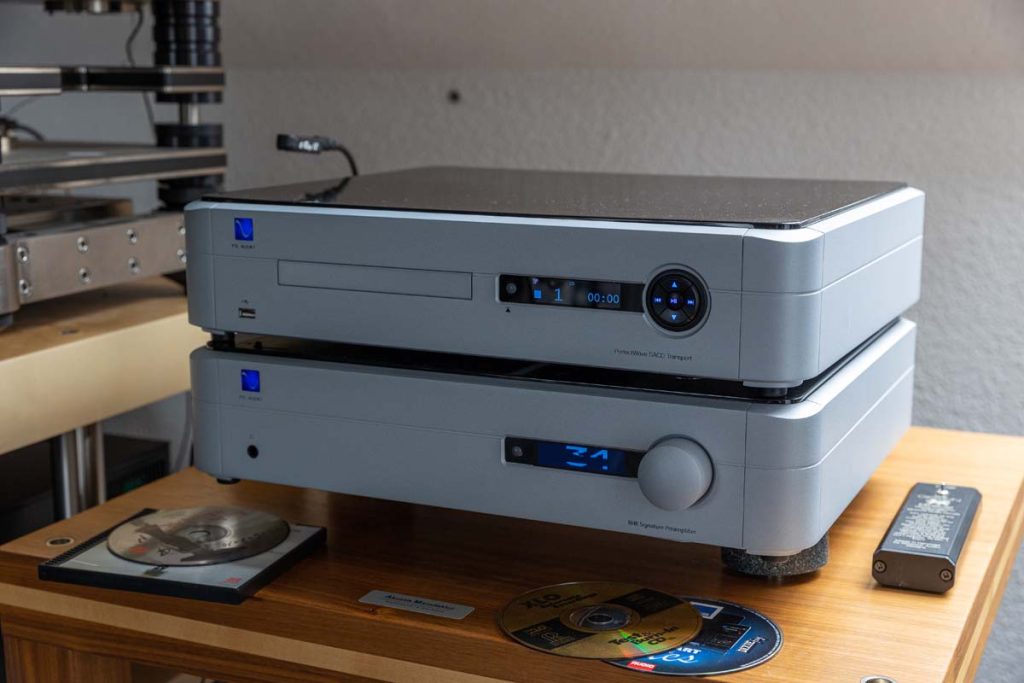 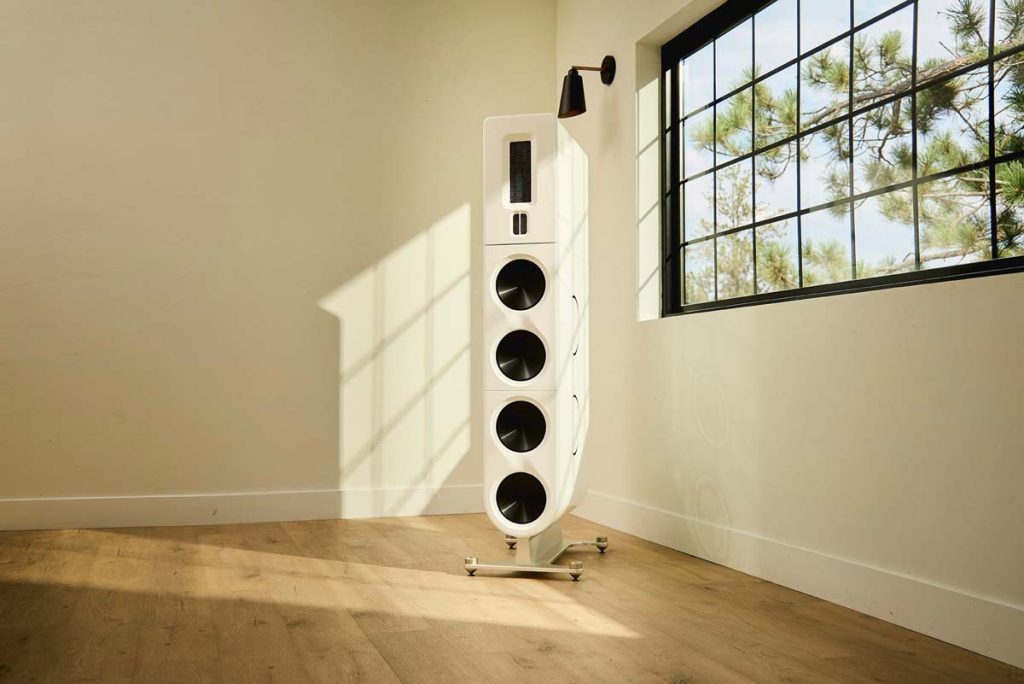 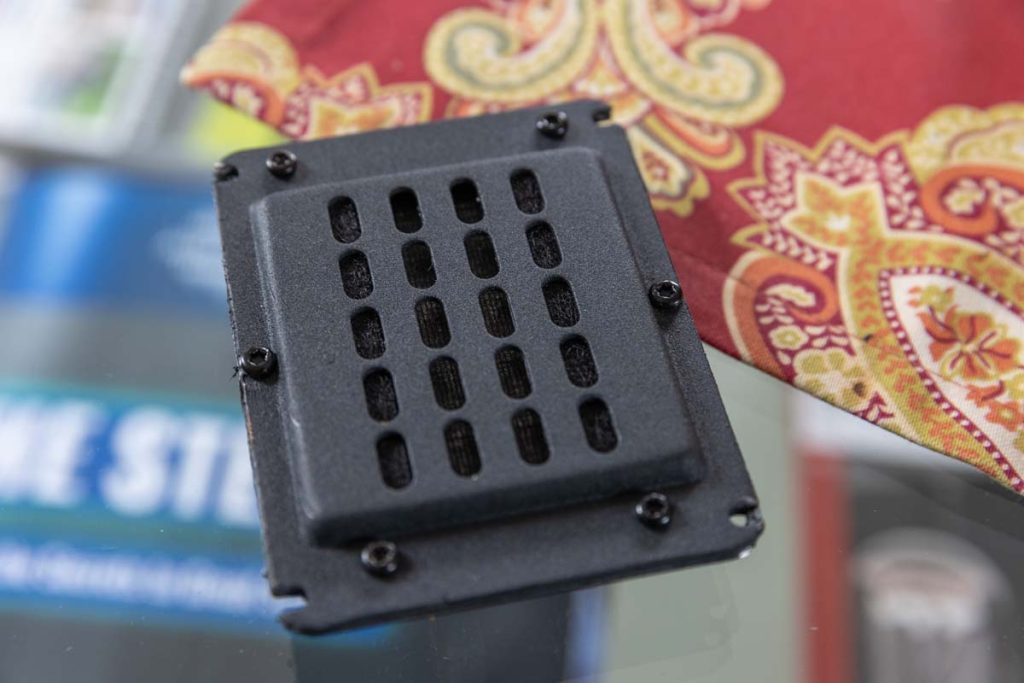 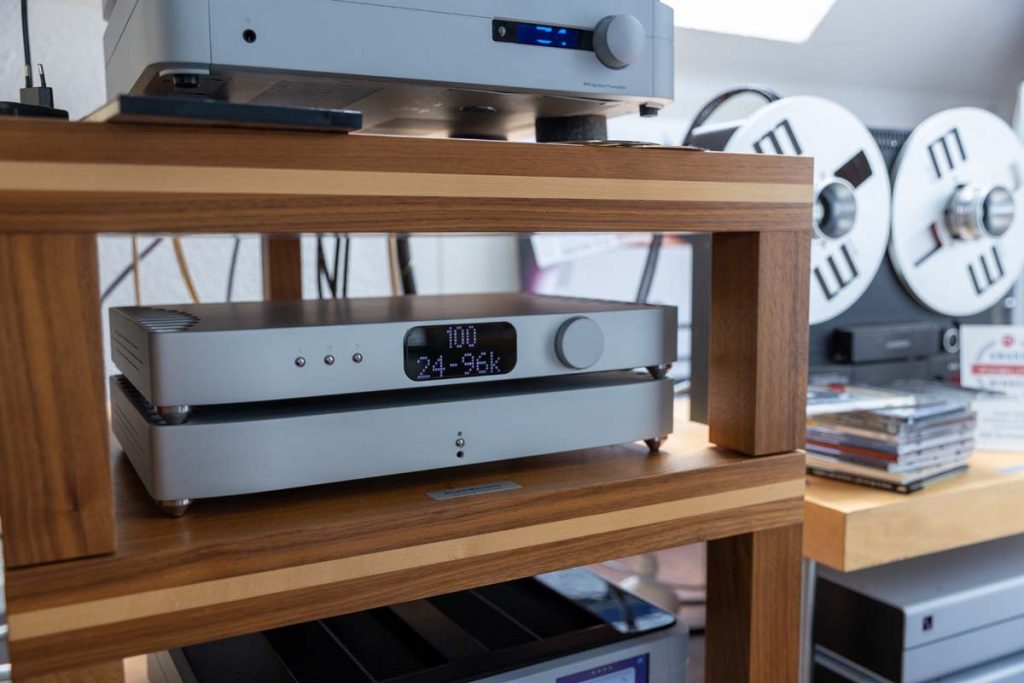 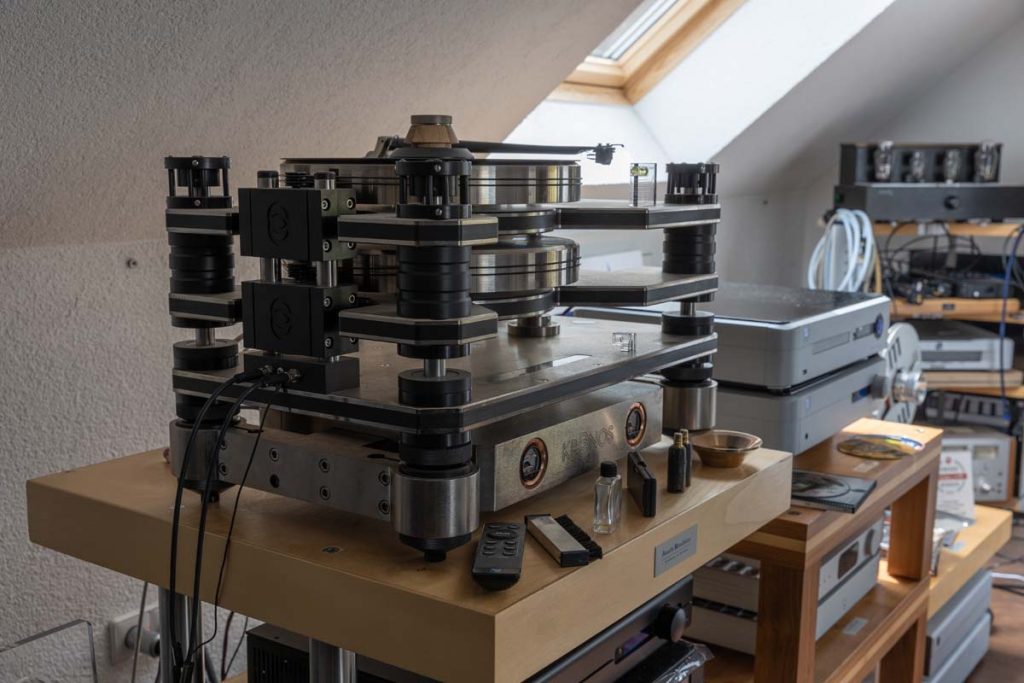 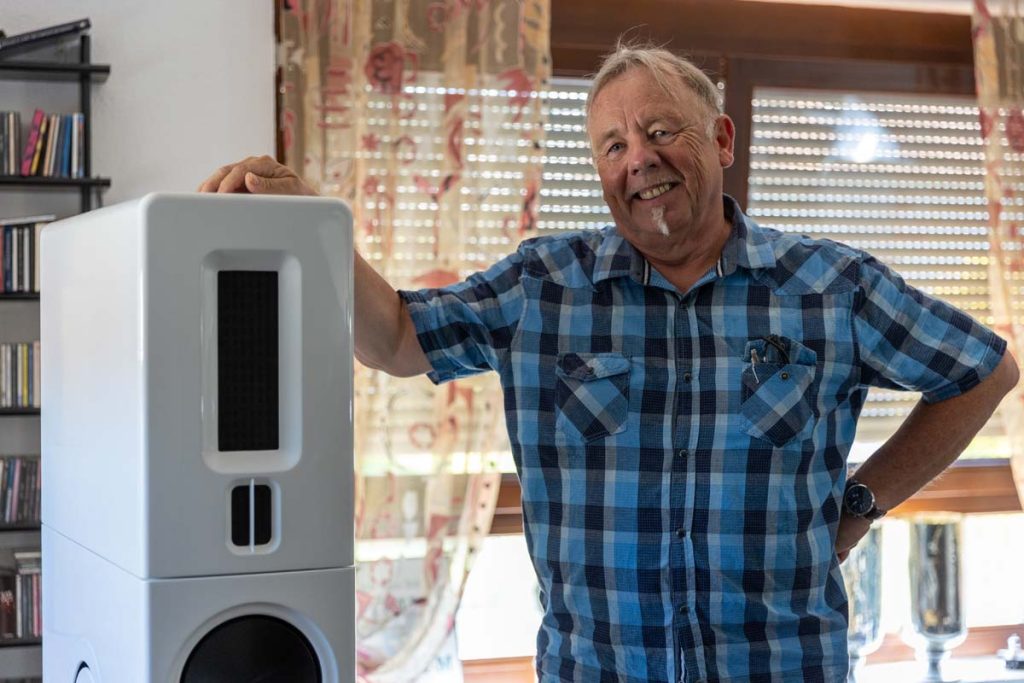 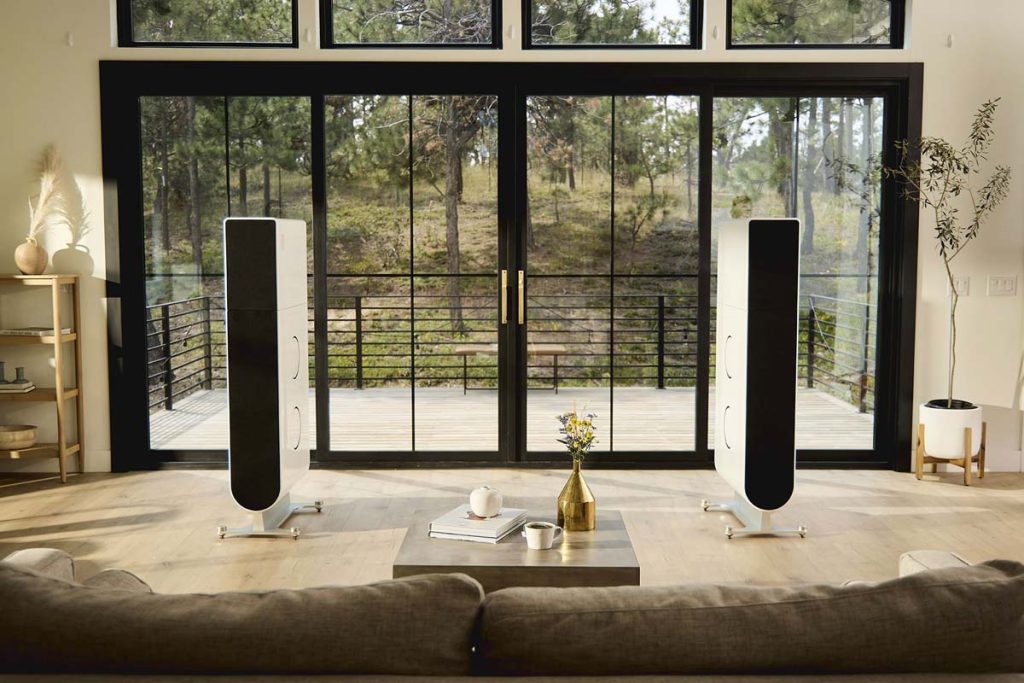 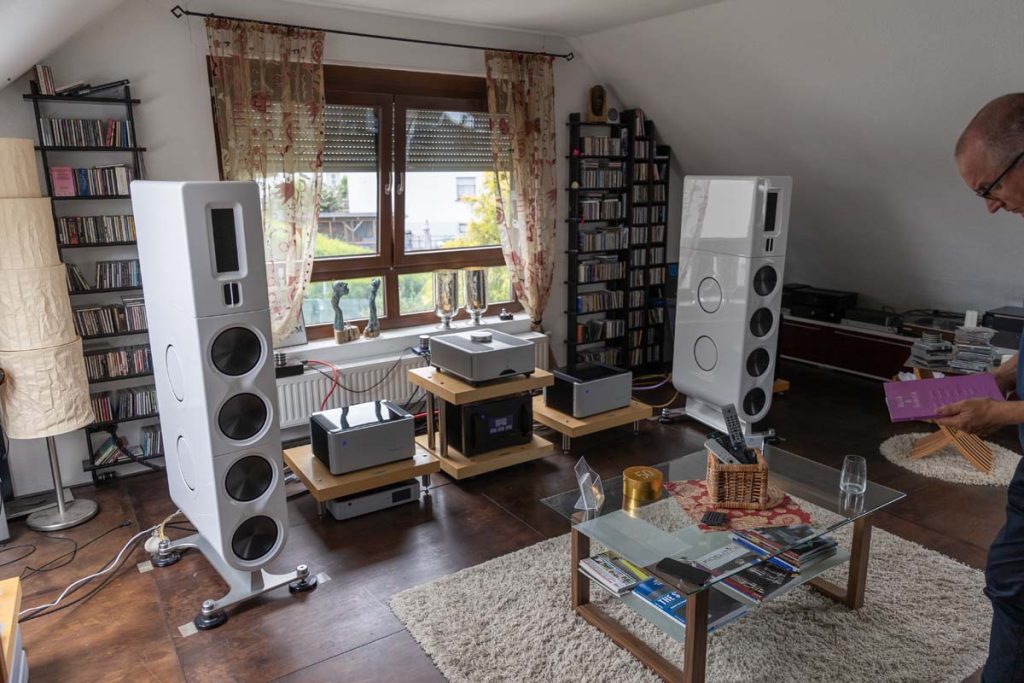 Colleague Carsten Barnbeck and I could confidently lean back during the preparation, because we heard this super loudspeaker in the appropriate PS Audio ambience at the German distributor HiFi 2 die 4. Jürgen Sachweh had taken care in advance, together with some experts, to position the FR30 as well as possible in the room, which is anything but an easy task with a loudspeaker that vigorously set the air in motion from as low as 28 Hertz. We experience this often enough in our own listening rooms, so we were glad to have some work done for us here.

Top-notch powered by top equipment from the other brands in the distribution portfolio – PS Audio (amplifiers), MSB Technology (converters and streamers), and Kronos (analog drive) – the PS Audio Aspen FR 30s were able to show what they were capable of, undisturbed. And that is impressive indeed. First, we both noticed the incredibly relaxed pace of these speakers. Whereby this phrasing has nothing to do with slowness. Every impulse, whether loud, soft, high or low, was put into the room with exactly the same effortlessness. Over the course of this very extensive session, we listened through all kinds of genres, from Renaissance to Electro, everything was there, which points to an outstanding characteristic of these speakers: Everything was equally fun, everything sounded equally good – or bad. Depending on the recording. Thus, the Aspen FR30 presented itself as one of the really quite rare speakers without preferences.

In this room, the PS Audio threw a rather wide than deep image, but this may also be due to the window behind the speaker center. The soundstage itself is well and cleanly divided up, although the FR30 refrains from placing everything on graph paper. My guess is that the rear tweeter forms a bit of an aura around each sound event, making it no less corporeal, but at the same time much more enjoyable.

Differentiation in soundstange height is exemplary: With Mozart’s Entführung aus dem Serail (HMF, René Jacobs, Akademie für Alte Musik) one hears the voices of the singers clearly above the orchestra, which spreads out far in the Teldex Studio in Berlin. The separation between voices and ensemble is also surprisingly easy, although nothing sounds as if it has been filleted with a scalpel. Here the developers around Paul McGowan have managed an amazing balance between studio-quality precision and enjoyable music listening. The old friends have gone at it again and really shown it to everyone. This is how you develop new concepts.