Anyone can make big, expensive devices: Every year you see them at High End, the international hi-fi trade show. But, when new products are better and less expensive and they don’t give two hoots about high-end preconceptions, they’re definitely worth a closer look: Introducing PS Audio Stellar. 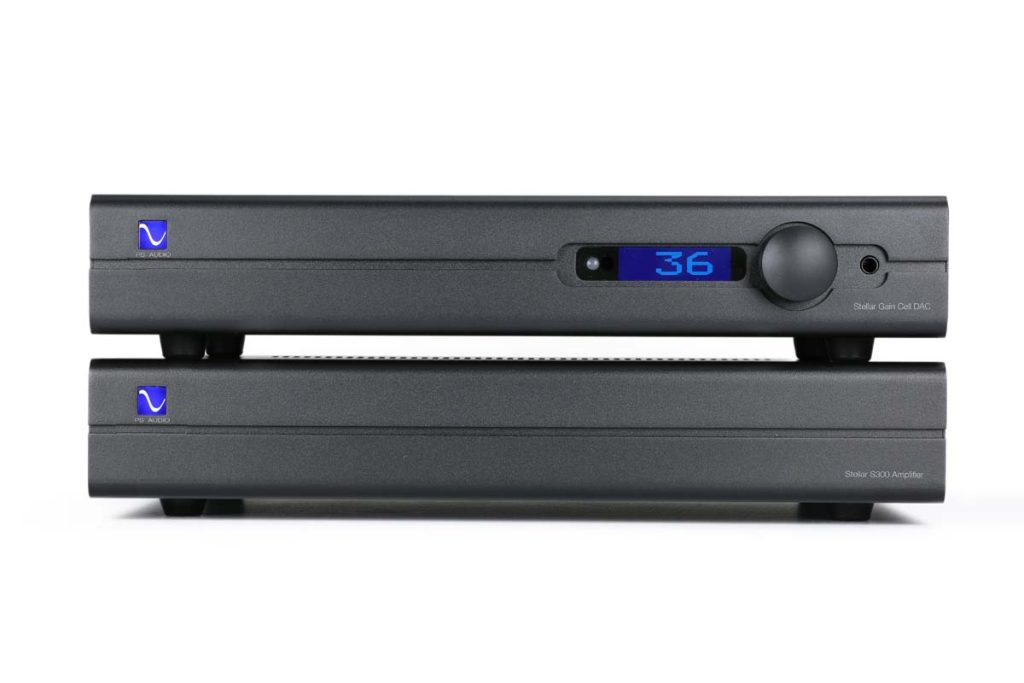 PS Audio has been a permanent fixture on the high­end scene for many years now. I’ve had the pleasure of listening to a few fascinating DACs from the US company and some really good phono preamps, too. And it’s still the most impressive aspect of all to listen to the very same system with and without a PS Audio Power Plant. For me, this power synthesizer, which regenerates a completely new AC with 230 volts and 50 hertz, is by far and away the most important “accessory” for a stereo system if you want it to sound really, really good.

This, in my opinion, ties in nicely with the company’s very professional image of always striving to provide technically solid solutions without attempting to perform any voodoo. Paul McGowan, CEO of PS Audio, clearly doesn’t invest his money in philosophies and “bling,” but rather in proper, decent electrical engineering. If you take the time to read the myriad of posts on Paul McGowan’s blogs, you quickly realize that each and every solution is based on sound reasoning; there’s clarity and transparency wherever you look. The fact that manufacturing is carried out in Boulder in the US state of Colorado and not outsourced to the Far East to cut costs also fits in with the general picture, as do the company’s stringent environmental standards.

As everything ultimately comes at a price, PS Audio is typically associated with a lot of things, but not bargain prices for thrifters. Considering the pricing of the new Stellar series, however, I would like to object. At this point, some readers will rightfully point out that even €1,700 is a stately price to pay for a stereo power amplifier and in no way can be considered a bargain. But having heard over the last few days how easily the S300 blows out of the water even considerably more expensive competitors, I’m sticking to my guns: These devices are an absolute steal. In the best sense of the word! 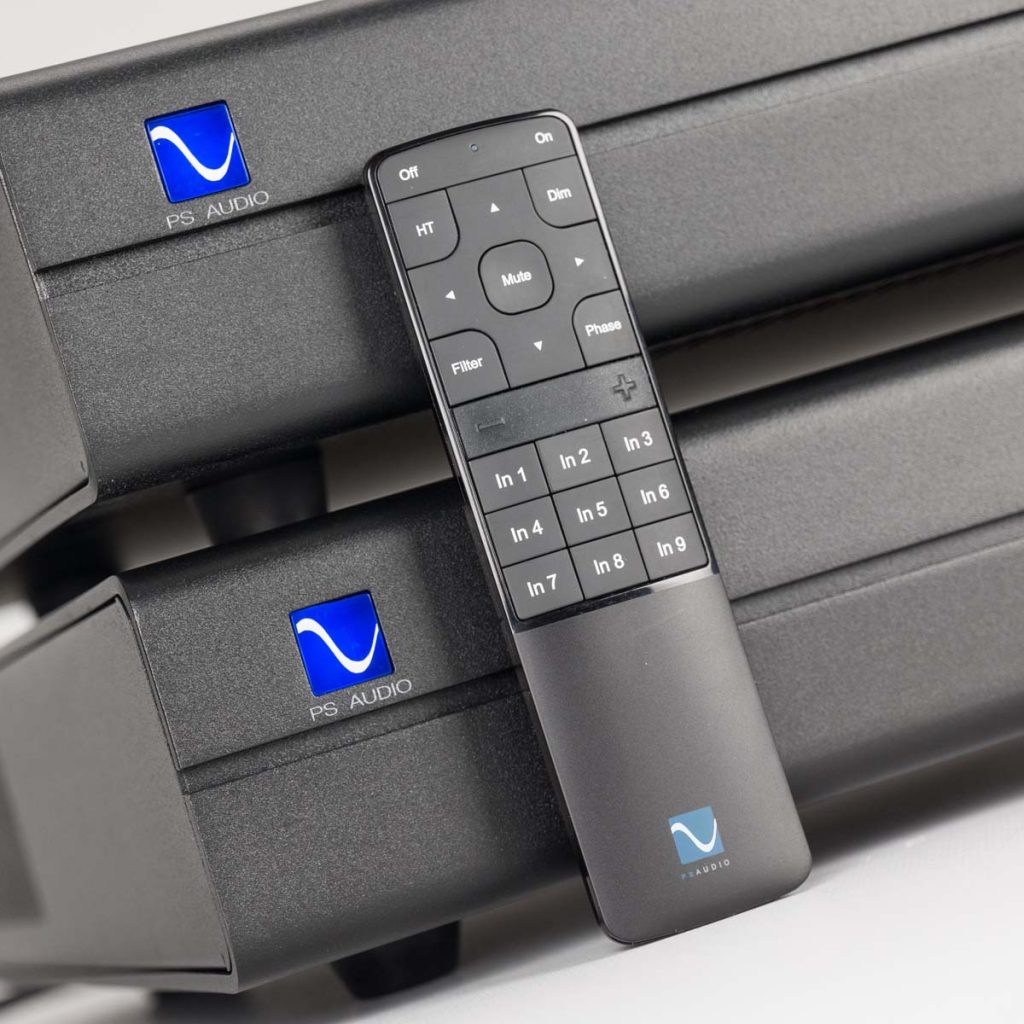 When you unpack the S300 power amplifier and its partner, the Gain Cell DAC (a DAC-preamp combo), you’re immediately blown away by how lightweight they are — when was the last time I managed to put a formidable power amplifier on a shelf using just one hand? Naturally, powerhouse devices can’t be milled from solid pieces of aluminum when costs need to be kept to a minimum; this is, of course, precisely where most production costs are incurred. But with the sound quality ultimately depending on the thickness of the front panel and the weight of the switches, it makes smart sense not to cut corners here. The aluminum shells of the Stellar duo, which together with the sidewalls form the housing, are definitely not what people would call to mind when thinking of real high­end heavyweights, but their clear no-nonsense design is fully to my taste. It’s fair to say there’s surely better clearances and fits on other top-end products on the market, but the ones here are perfectly fine in my opinion.

The front of both PS Audio Stellar models is neat, uncluttered, and modest, and the rear offers everything an audiophile could need. The S300 power amplifier has inherently fewer bells and whistles: An illuminated standby switch is located on the front … and that’s it. The rear features balanced and unbalanced inputs, two pairs of stable binding posts per channel for loudspeaker cables, the power jack, and a “hard” power switch. That’s all you need anyway. Things get a little more lavish with the DAC preamplifier, though: four analog inputs (one of which is balanced), both versions of outputs, and a whole host of digital inputs, some necessary, some nice to have. Incidentally, when it comes to the PS Audio Stellar devices, balanced connections are worth their weight in gold as both models are actually designed to be permanently balanced.

If you open up the cover of the S300 power amplifier, you’ll see some old friends: two output stage modules from the ICEpow­er range. However, McGowan combines these with an in-house class A input stage that’s equipped with PS Audio’s typical molded Gain Cell modules. The entire power supply runs through the switched-mode power supply units of the output stages, making any search for a heavy metal one done in vain. So, it’s a flyweight — but one that packs a punch, as you’ll soon see … 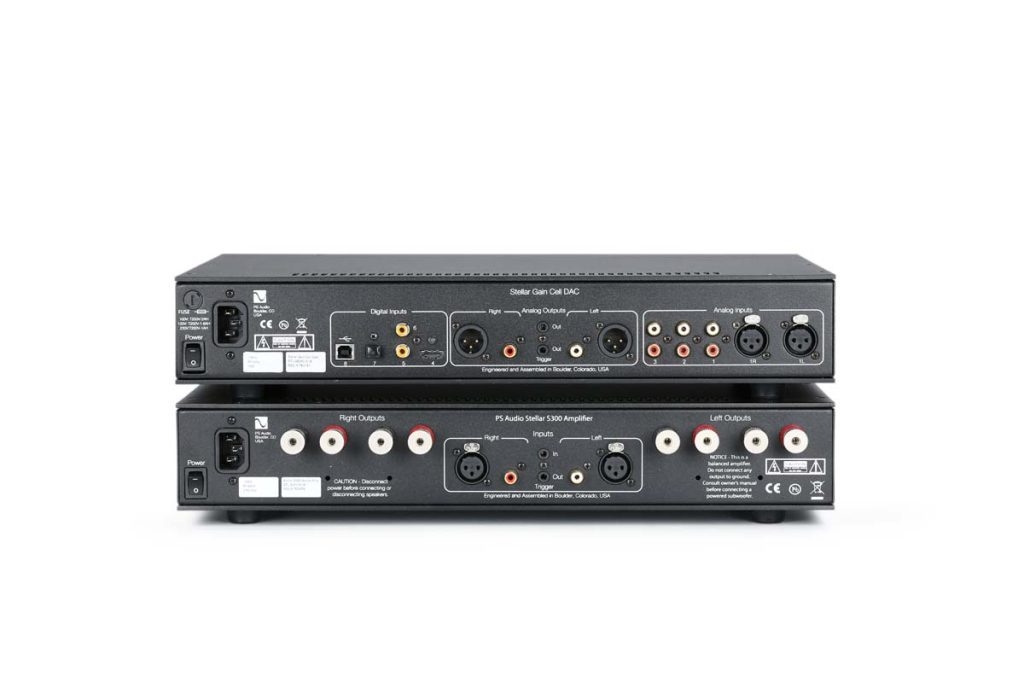 The Gain Cell modules developed by McGowan also feature in the preamplifier. In addition to a discrete class A amplifier circuit, which can work at stable temperatures in the small molded boxes, the Gain Cells enable volume control without the need for any further circuits. This is achieved by driving the actual amplifier circuits differently depending on the required volume, causing them to then emit the corresponding level. A rather cunning and smart system that keeps its cards close to its chest — and explains the casting compound. The converter is an old friend from the PS Audio range: an updated version of the Nu-Wave DSD. This board processes all PCM and DSD data rates and, I thought to myself, it would presumably sound very clear and detailed with a knack for tones and the flow of the music, provided not a great deal had changed since my last encounter with a PS Audio DAC. I was eager to find out.

At the start of our time together, I connected the S300 power amplifier to the primary monitors in my studio. The first piece of good news: no whooshes and no crackles. The power amplifier only lets you know it’s idle by shining its standby switch light. After a delightfully short “warm-up” lasting around 10 minutes, the S300 really kicked in and started to show what’s got. Initially I was struck with the edge sharpness (acutance) of the overall sound image, which is typical of really good class D amplifiers. Individual instruments were even more precisely defined in the panorama (my colleague Cai Brockmann, who knows my room well, will no doubt be wondering right now how that could be possible), detaching themselves from the background in an incredibly organic way. That made it very easy to assess the settings of individual tracks’ equalizers and compressors even in complex mixes. However, this outstanding resolution was not only offered in the mid-frequency range, but across the entire frequency range as well, although it did emerge in the lowest regions at the cost of a certain richness or warmth. But with most loudspeakers and (in particular!) rooms, this clarity in the bass is a distinct advantage. I noticed this later when I tested the power amplifier one story higher in the living room. Here, in a standard consumer acoustic setting so to speak, I no longer noticed any leanness and everything sounded just like it should. Back in the studio, though, I also stopped hearing it as soon as the subwoofers kicked in. 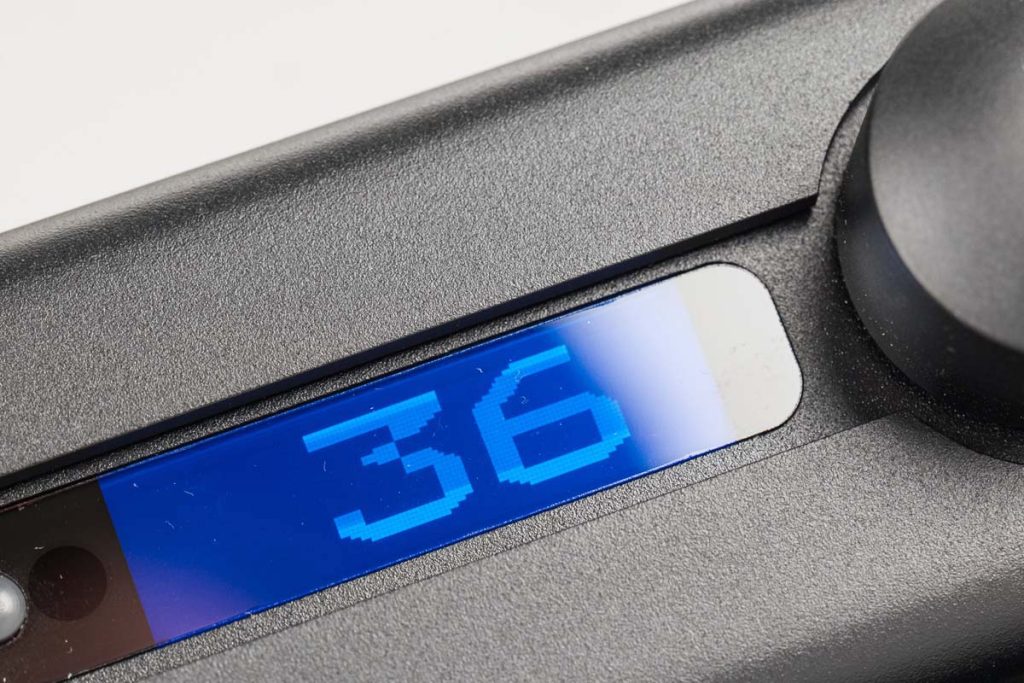 I was particularly impressed when I connected the duo to my old Spendor S3/5SEs: Controlled by the PS Audio machines, the sound they produced went well beyond my expectations. With my eyes closed, it was suddenly impossible to locate the loud­speakers in the room; seldom have I heard the Spendors play so weightlessly and effortlessly. They’ve achieved similar qualities before with other class D power amplifiers, but in the process they weren’t able to conceal a certain hardness or, perhaps better, brittleness. In this case, everything remained fluid and smooth, despite the abundance of details. I suspect now this can be traced to the company’s class A input stages. Incidentally, the Stellar S300 gets on famously well with class A preamplifiers: In the studio, I found it worked significantly better with a Crane Song Avocet than with any other equipment.

When paired with the Gain Cell DAC preamplifier, these synergies really came to life. I could hear everything kind of “fall into place.” It’s hard to describe, yet I’m confident that most of you know exactly what I mean. Incidentally, it doesn’t really matter whether the preamplifier operates as a purely analog preamp or as a DAC as well. It’s easiest to describe using a CD: With their dynamic range and abrupt volume changes, the incredibly stunning recordings of Ludwig van Beethoven’s piano sonatas played by András Schiff have a tendency to push unstable systems to their limits. Although this was clearly not something I had to worry about here, these CDs can be a real challenge, even for bigger beasts. When combined with other equipment, the PS Audio duo is able deliver everything you need. Details, information, tones, and flow — nothing is missing as long as all the other devices in the rest of the chain do their job equally well. When the two devices work together though, none of these parameters even enter your head. Everything works so smoothly, you just don’t pay attention to that sort of thing. 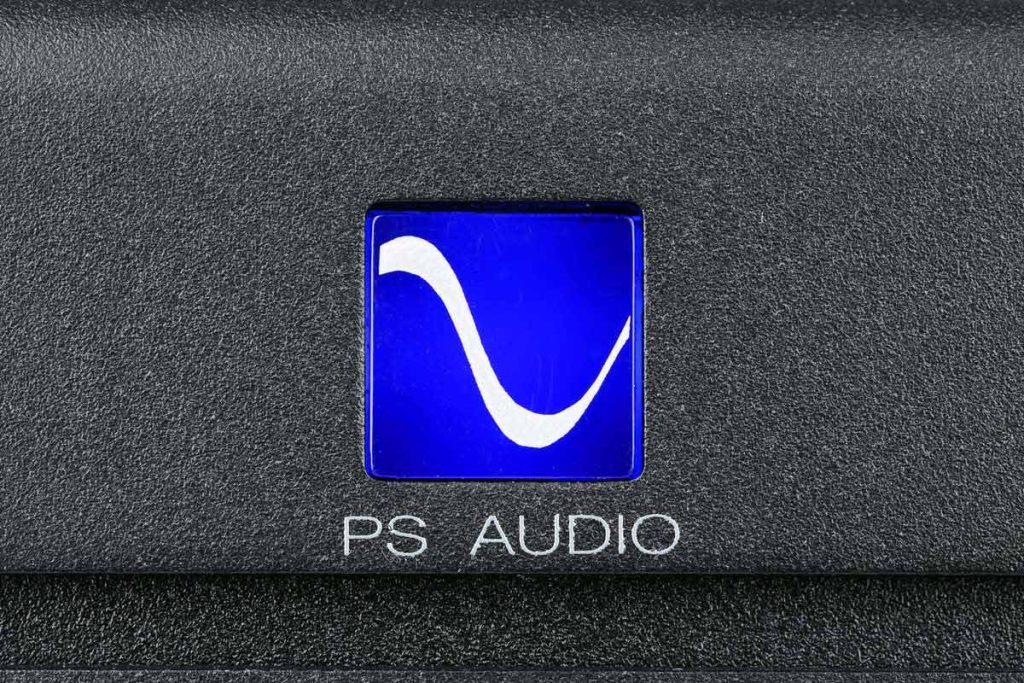 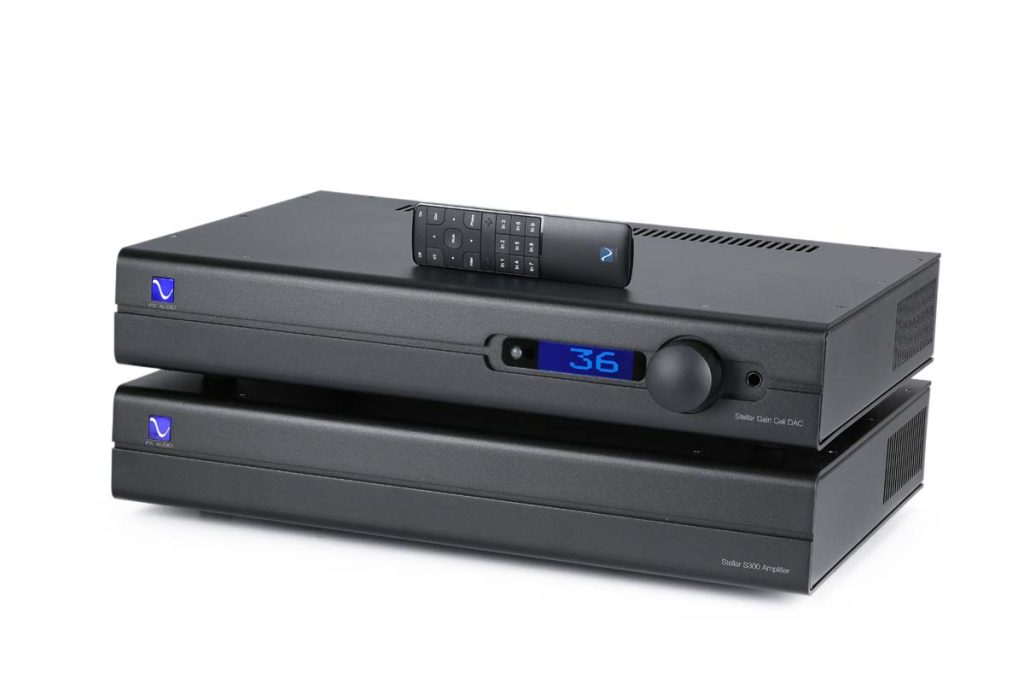 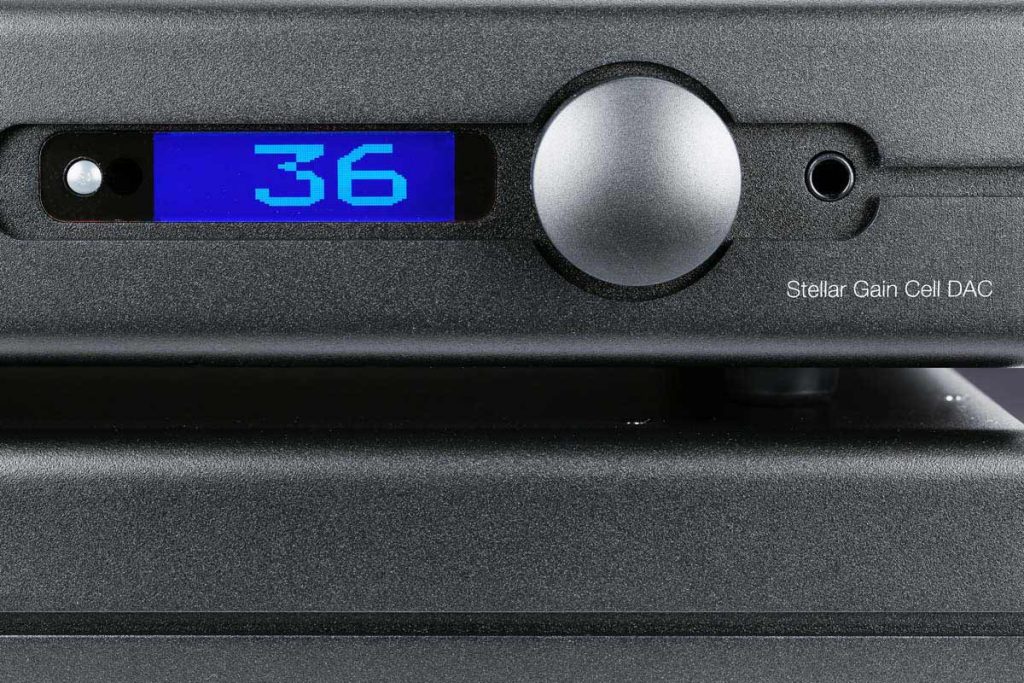 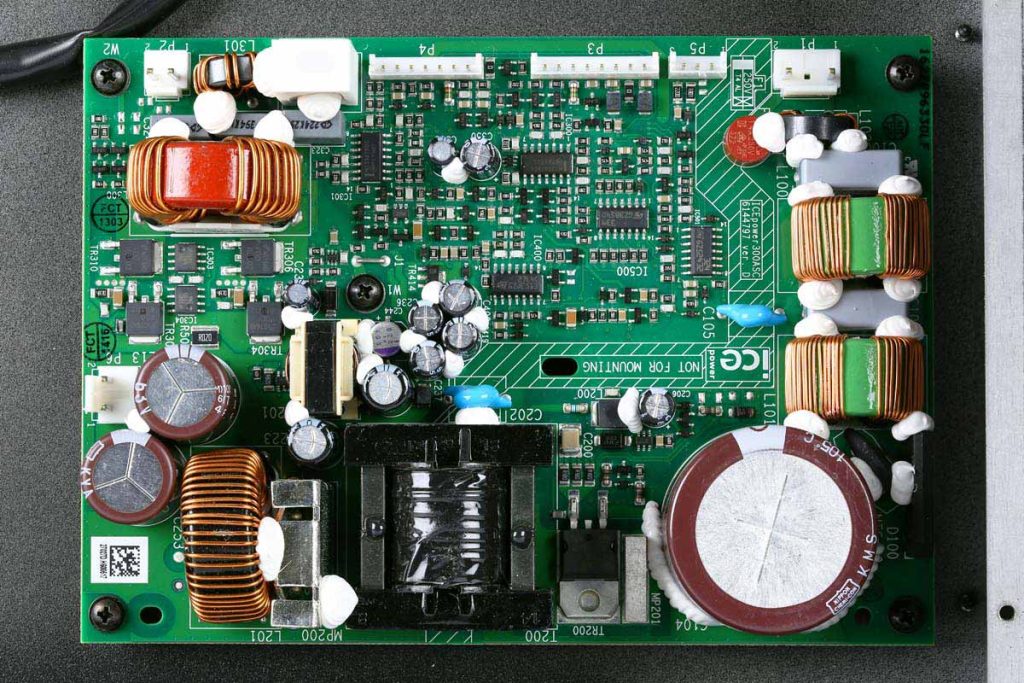 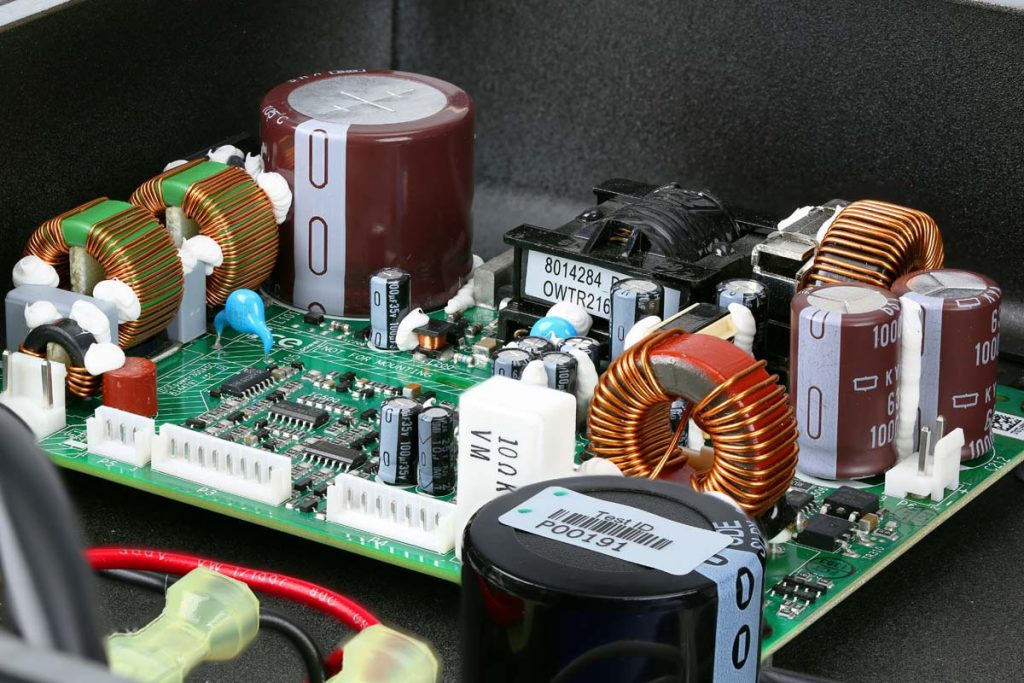 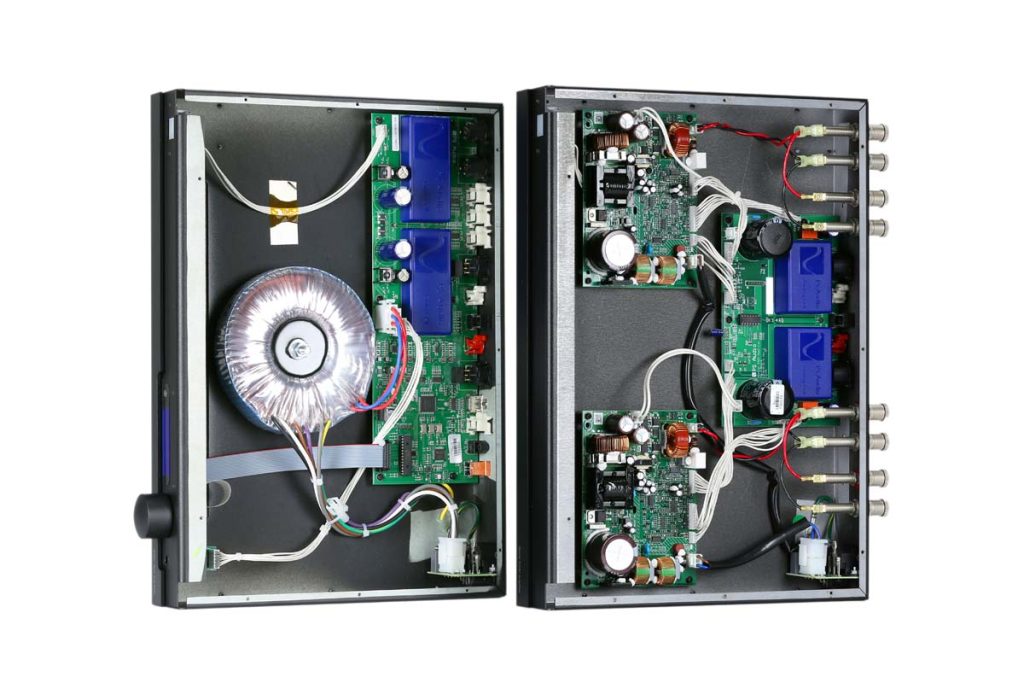 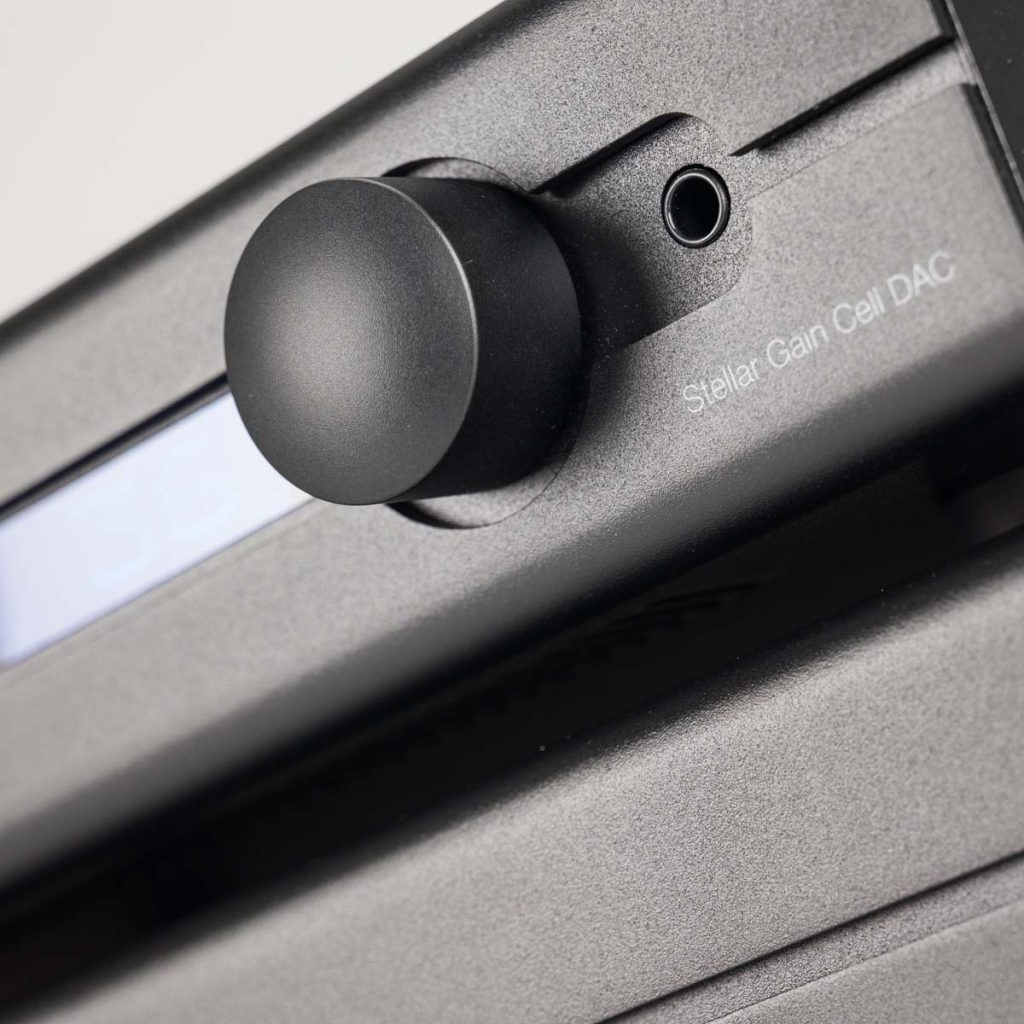 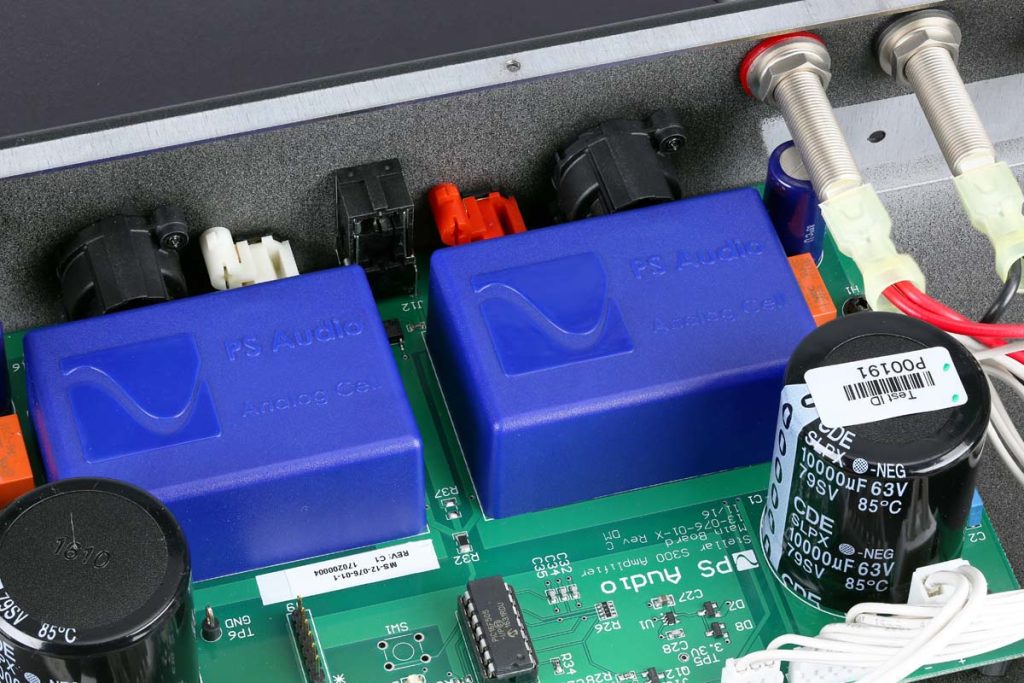 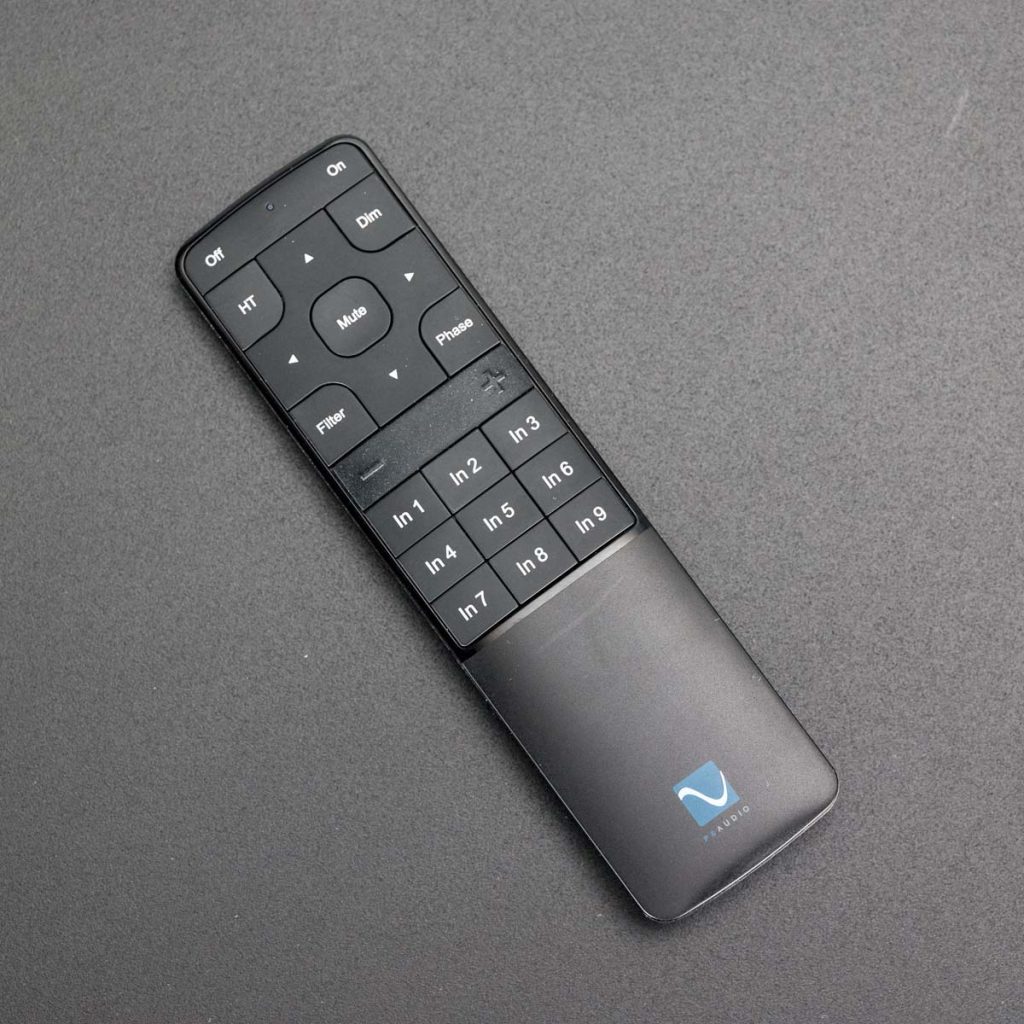 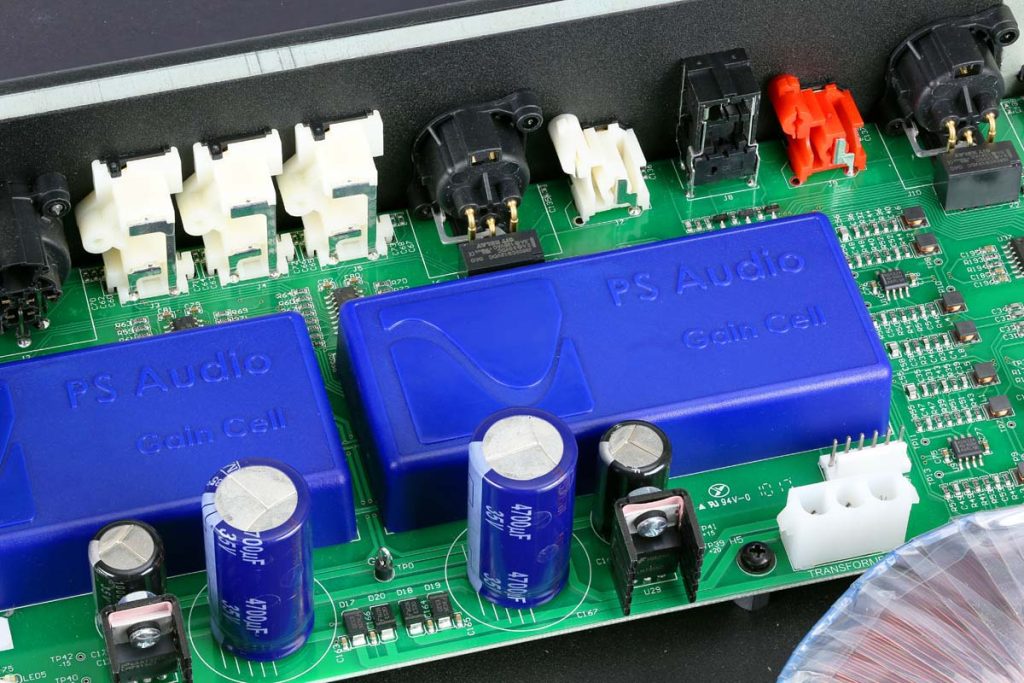 Then a particular skill of Schiff, which you actually only notice if everything else around is just right and all disruptions have disappeared, suddenly emerges: He’s able to dissect complex pieces into their individual constituent parts without undoing the overall coherence holding them all together. Just like in an exploded­view drawing used in mechanical engineering, spaces are suddenly created in front of, next to, and behind the notes: As you listen, you feel like you could be walking through the architectural structure of the piece, like walking through a cathedral. You hardly notice it as you listen, because it comes across so naturally. But when you listen to the same piece played by another (actually, almost any other) pianist, you’re startled by how small and two-dimensional everything suddenly sounds. The loss hurts. You can only experience such moments outside the concert hall, however, if absolutely everything in the stereo system is just right, regardless of the price category.

Volume control that sits in the signal path distorts the signal regardless of how elaborately it’s put together. This is why PS Audio Founder Paul McGowan came up with another approach to tackling the problem around one and a half decades ago. Instead of using potentiometers, circuit switching networks, transformers, or resistor cascades to control the output volume, McGowan created the “Gain Cell”, which relies on a different principle: the “variable gain amplifier” developed by Howard Jones and Gilbert Cell back in the 1960s. In the golden era of analog recording technology, this principle was very common in recording-studio equipment as it also turned out to be superior in terms of sound quality.

When the volume control is turned, PS Audio’s Gain Cell modifies the gain instead of influencing the signal itself. By using the “variable gain amplifier,” PS Audio eliminates the need for additional circuits in the signal path and achieves an exceptionally neat control range of over 80 decibels. The Gain Cell also works in purely analog form in the Stellar Gain Cell DAC: It switches the preamplifier’s inputs without ever abandoning the analog level. It also has a fully balanced circuitry layout to minimize interference and crosstalk.

To also ensure that, where possible, no sound gets lost in the power amplifier’s signal path, PS Audio uses an “Analog Cell” in the Stellar S300 power amplifier, which was developed by Darren Myers, the chief designer of the Stellar series. The Analog Cell represents a negative-feedback-free, balanced MOSFET input stage, which runs in class A operation. It’s designed to be especially similar in terms of tonal characteristics to a tube, and enables the developer to “voice” the power amplifier.