Rush versus Cygnus and the Sea Monsters

Rush versus Cygnus and the Sea Monsters. In Canada, where all the members of Rush were born, the prog rock band had numerous platinum (and even multiplatinum) selling albums over a period covering about two decades. In the neighboring, more populous US, many of Rush’s albums also went platinum, even up until the beginning of the 1990s! British prog rock bands such as ELP, King Crimson, and Genesis (in their progressive era) could only dream of achieving that kind of success in the US. Though Rush only ever operated as a trio, they earned the respect of countless rock fans and many of their peers by displaying their sheer skills as musicians and sharing their crude science fiction fantasies. To give their skills as musicians and the utopian content of their music plenty of room to shine, the band wrote an extended, multipart, suite-like epic song telling one long, continuous story for almost every album. Rush’s fifth studio album, A Farewell To Kings (1977), ends with the four-part track titled “Cygnus X-1 Book I: The Voyage.” The lyrics tell the story of an explorer aboard the spaceship Rocinante who journeys toward a black hole known as Cygnus X-1 before finally being drawn into it.

“Cygnus X-1 Book II: Hemispheres” is the continuation of that story and the opening track on the follow-up album; it also provided the inspiration for the album title: Hemispheres. This is yet another suite-like epic song, but this time it actually occupies an entire side of the vinyl album. 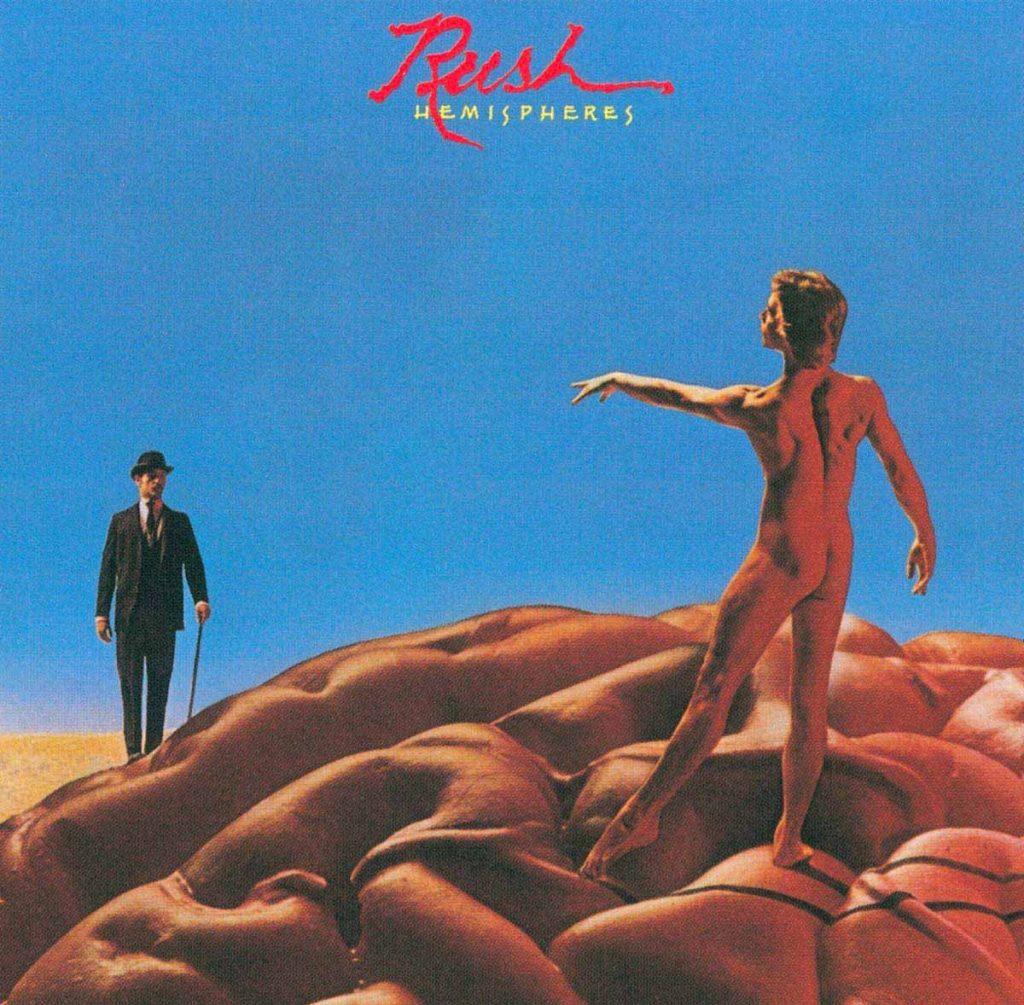 The story reintroduces the space explorer from Book I who has flown through the black hole and oddly enough now finds himself in the midst of Greek mythology. Apollo, the God of Light and Logic, and Dionysus, the God of Intoxication and Emotion, are locked in a struggle — very Friedrich Nietzsche. The use of the word “Hemispheres” in the track’s title is therefore an allusion to the two halves (hemispheres) of the human brain, which (broadly speaking) are responsible for logic (left) and emotion (right). Our space explorer is recognized as the God of Balance and given the name Cygnus, whereby the fifth part of the epic song is called “Cygnus: Bringer of Balance.” A second epic song on the album, the 12-part, almost 10-minute-long instrumental track titled “La Villa Strangiato,” is even more impressive from a musical perspective. The band didn’t develop this “suite” until they were in the studio and wanted to record it in a single take but struggled to complete the technical twists and turns around 40 times. In the end, they pieced together the recording from various takes.

Before the music for the album had been fully written, Hugh Syme started on the artwork for it. For a long time, Syme was the go-to cover designer for many rock and metal bands, such as Aerosmith, Def Leppard, Megadeth, Queensrÿche, Survivor, and Whitesnake — to name but a few. As inspiration for the cover of Hemispheres, he had simply been given drummer Neil Peart’s lyrics: “Beautiful handwritten pages, which I still have to this day,” as Syme once revealed. “The band often didn’t start to write any music until Neil’s lyrics were ready.” The idea for the album cover emerged after discussions with Peart about the functions of the left and right hemispheres of the human brain. The two figures therefore symbolize logic (Apollo) and emotion (Dionysus). They are standing on an oversized brain and you can see the border between them separating the two hemispheres. Syme stated that they used actual human models for both figures. He even had a model for the brain – provided on loan from an institute of anatomy. The album cover was produced using an airbrush, a paintbrush, and a camera; computer graphics were not yet the norm in 1978.

It is clear to see that progressive style “classics” are simply beautiful études for instrumental virtuosos of the new prog rock scene. The American super-technicians Dream Theater, for example, released several concert recordings between 2004 and 2007 in which they covered famous rock albums, such as Master Of Puppets (Metallica) and Made In Japan (Deep Purple). In 2006, Dream Theater’s cofounder and long-time drummer, Mike Portnoy, also initiated a live homage to Rush — not with his Dream Theater band members but as part of a project named “Cygnus And The Sea Monsters.” The tribute performance titled “One Night In Chicago” was part of a larger concert event held to celebrate the 20th anniversary of a famous large drum store. What could be better than one of the current drumming legends (Portnoy) honoring one of the drumming legends from the past (Peart)? Of course this was no mean feat for Portnoy’s all-star quartet. They covered three legendary epic songs from Rush, namely “2112” and both “Cygnus X-1” suites. They also performed “YYZ,” an instrumental track off Rush’s Moving Pictures album, which Peart regularly used for an extended drum solo during the band’s live performances. Portnoy reproduced this approach himself.

A certain Scotty Hansen reworked Hugh Syme’s artwork for the concert tribute album by caricaturing Portnoy and his band members as four sea monsters. (You presumably have to reinterpret the Dionysus figure as Cygnus.) 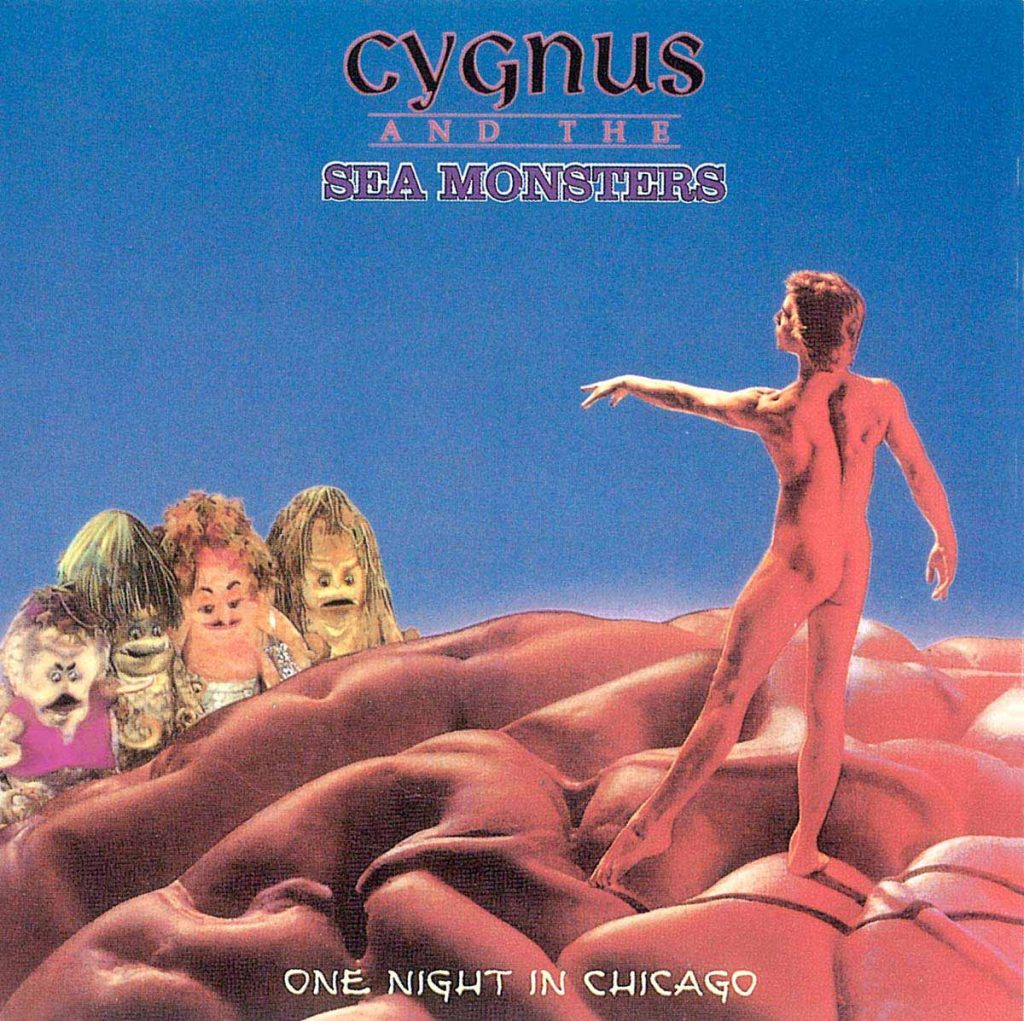 The booklet and inlay contain further artwork allusions and the original artist (Hugh Syme) is even mentioned. It’s no surprise really, as Mike Portnoy wouldn’t want to blow his chances of working with the renowned artist. Since 2005, Syme has also designed many album covers for Portnoy’s longstanding band Dream Theater.