Stockfisch Records is an audiophile label established in Germany in 1974 by owner/producer/engineer/Günter Pauler. The label has been releasing recordings on vinyl, DSD, SACD, Blu-ray and other formats and their artist roster includes Werner Lämmerhirt, David Qualley, Sara K., Allan Taylor, Carrie Newcomer, Katja Werker and a number of others. They also offer their TTC-Pro True Transmission Cable speaker cable.

I’d known of Stockfisch, but noth­ing could have prepared me for the record I recently received: The Stockfisch DMM Dubplate Vol. 1. The disc is made from copper-plated steel and has a literally dazzling copper surface. It comes in a beautifully-presented box with a detailed booklet — and a pair of white gloves for handling the disc. The box is specially-designed to keep the record as pristine as possible, with a foam surround and a silicone top plate that holds the record securely in the box. I have never seen anything else like it. The record is slightly larger in diameter than a standard vinyl disc and has some weight to it. The idea behind DMM Dubplate Vol. 1 was, like conventional direct metal mastering (DMM), to remove a number of the steps involved in physically mastering and pressing standard vinyl records (the need to produce a mother, father and stamper), and eliminate the generational loss resulting from the multi-step process. Stockfisch takes the idea further — the DMM Dubplate Vol. 1 is the master: it’s direct­ly cut from the mastering lathe! 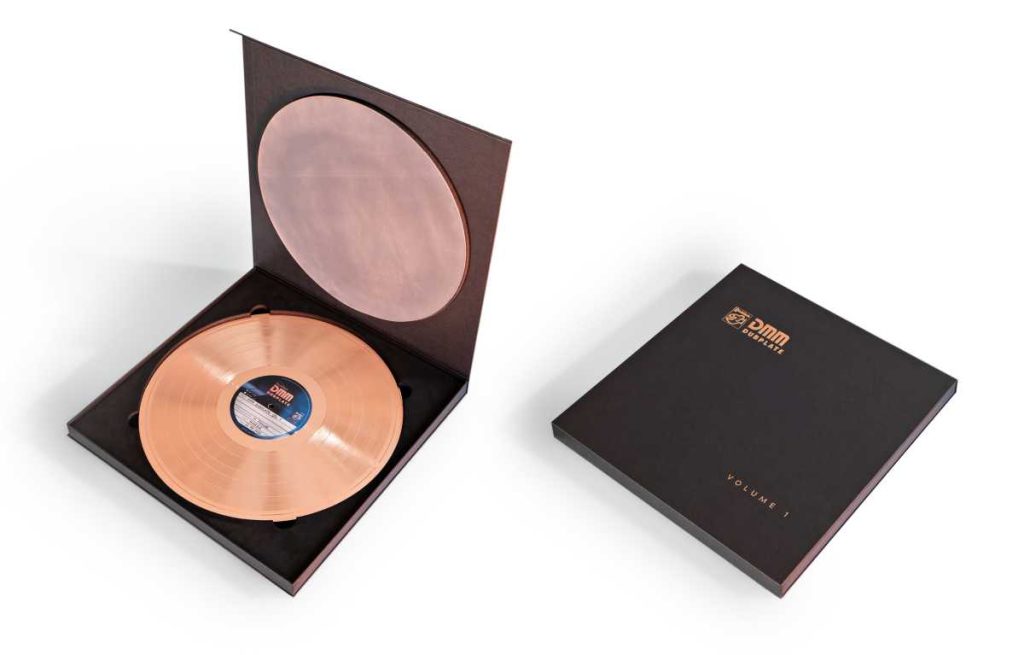 DMM Dubplate Vol. 1 includes five tracks from Chris Jones, Carl Cleves & Parissa Bouas, Ewen Carruthers and Sara K. Only one side has mu­sic, because the back side is not plated so music can’t be cut into it.

Before going any further, I know what you’re thinking, the same thing I did: will this metal record damage my stylus?

According to Stockfisch, no, and more on that later. I will admit being a little hesitant in drop­ping the needle of my not-inexpensive Grado cartridge onto the surface. At first, I thought I had forgotten to turn my phono stage on. I heard nothing but quiet — no groove noise, no pre-echo, no nothing. But, no, my system was working; it was just that the surface of this copper-clad disc was remarkably quiet. I moved the tonearm further into the record…

I was astounded by what I heard.

I’ve been listening to records since I was a baby. I’ve heard hundreds, thousands, including a good portion of the audiophile classics — Casino Royale, The Sheffield Track Record, Mobile Fidelity Ultradiscs, you name it. Still, I was floored by the purity, dynamic impact, tonal richness and the stunning presence of the music. The impact is immediate — you just know you’re hearing something special; let the analytical brain kick in later.

There is an intimacy and, well, directness to the sound that really is remarkable — and will take any seasoned audiophile about five seconds to hear. For example, on the first cut, Chris Jones “No Sanctuary Here,” the bass has real weight and harmonic richness, not just “bass exten­sion.” His vocal is upfront and palpable, in the midst of a deep soundspace. When the acoustic guitar takes a solo, there’s a point where you can hear the “ping” of the string plucked against the fret, one of many moments of startling realism here.

On Carl Cleves & Parissa Bouas’ “Into the Light,” the presence of her vocal is so full and lush that I almost laughed out loud. Can a dobro sound lush? Yes, it can. Chris Jones’ “Fender Bender” is a dazzling, virtuosic duet between acoustic guitar and electric bass, with instrumental accompaniment, and here, you really feel the pace and drive of the music, and the guitar and bass remain totally distinct from each other even at breakneck speed. The fourth cut, Ewen Carruthers’ “When the Time Comes Around,” is simply gorgeous; I felt like I could walk into the sound.

I went into listening to Dubplate Vol. 1 with the preconceived notion that because of the reduc­tion of the steps in the record-pressing process (and the elimination of generation loss), that what I’d hear is more of the “audiophile” stuff — more detail and low-level resolution. While there’s plenty of that, along with a remarkable absence of noise, what struck me the most is the increase in the palpability of the vocals and instruments, of the weight, of the tangibility of the sound. Everything sounds incredibly present, more real, more convincing.

The fact that this was cut from digital is going to make many LP purists take pause. I can tell you, it’s made me rethink the whole record manufacturing thing. How much of the re­cord-pressing process is responsible for which sonic aspects? I thought I knew. Maybe not. How many times can you say that listening to something has been a learning experience?

Sure, the price of Dubplate Vol. 1 isn’t cheap, but then again, I’m sure the cost of manufactur­ing isn’t either. (Full disclosure: I don’t know anyone at Stockfisch. I requested a disc because I was intrigued by the technology. I didn’t know what it cost until writing the review.) I’m happy that Stockfisch even did this, a boundary-push­ing attempt at achieving better sound, the kind of bold effort that makes the pursuit of high­end audio so thrilling at times.

I asked Stockfisch’s Günter Pauler to provide us with more detail on the disc. Günter Pauler: We [have] cut 14-inch DMM masters that are sent to pressing plants for the production of vinyl records. We listen to these DMM cuts every now and again, comparing them with the vinyl LPs that have been pressed from the DMM master. We observed that the sound quality of the pressed vinyl always fell disappointingly behind the original DMM master. 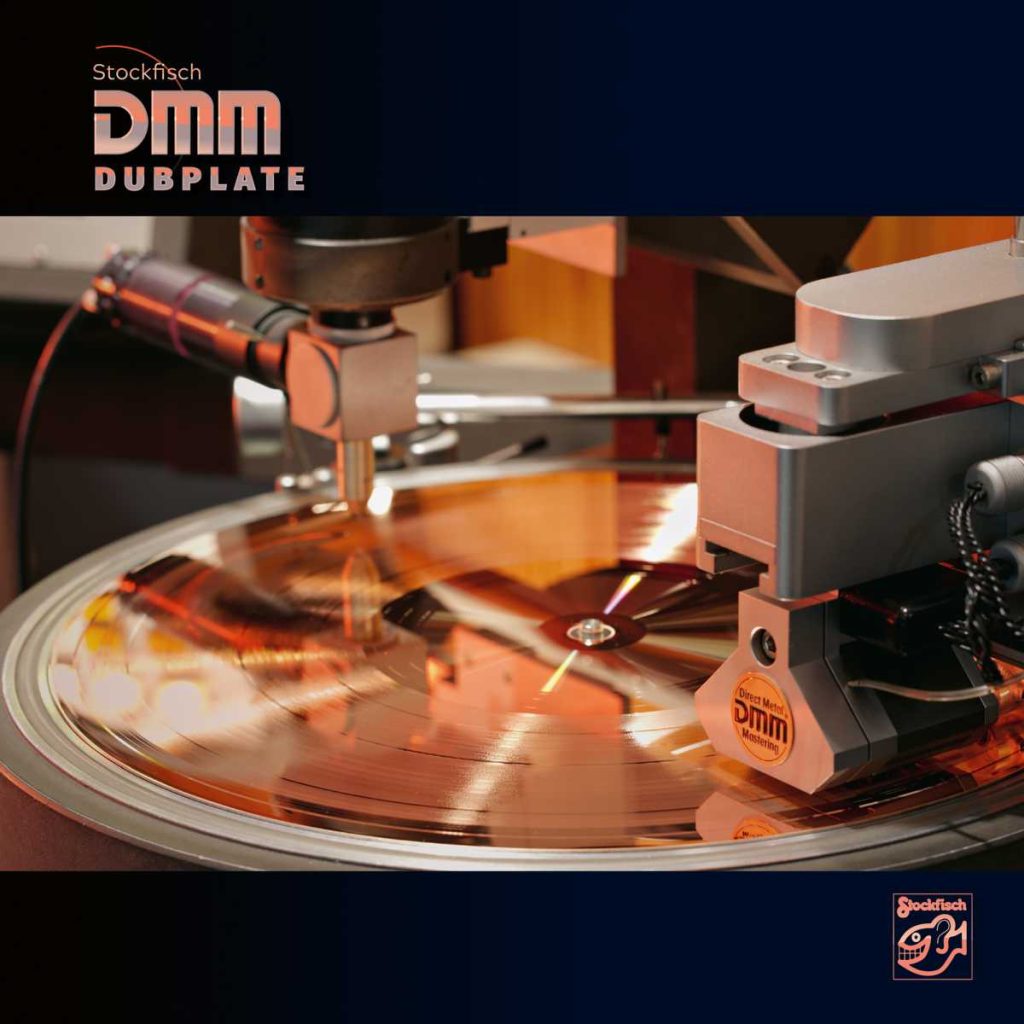 Thus we came up with the idea for a 12-inch Dubplate, which we thought might be interest­ing for companies that develop and produce pickups for record players, because with the Dubplate they would be able to evaluate the true performance of their products by avoiding the pitfalls of pressed vinyl. Unfortunately no pickup producer was interested in this possibil­ity. But the reaction we received from high-end listeners was just the opposite.

The 12-inch Dubplate is cut one at a time, just like its 14-inch counterpart [record master] that is sent to a pressing plant. The copper blank is made of a 1mm-thick stainless steel disc, which then receives a 0.1mm-thick gal­vanic plating of phosphate-copper. The 14-inch blank discs are not exactly flat, but rather a bit concave and uneven, because the melding of two different metals creates tension on the disc.

On 14-inch blanks this imperfection does not negatively affect the cut, because the disc is pulled flat under vacuum on the Neumann VMS DMM [cutting] lathe. Our 12-inch Dub­plate, however, has to lie flat on the turntable of a record player, where only a maximum of 0.6 mm vertical movement is allowed. For this reason, our 12″ steel blanks are made flat by means of a roller press which applies several tons of pressure. Not only is this procedure expensive, but we still discard about 30 percent of the blanks as not suitable. That’s why we sell the DMM Dubplate for a relatively high price of 700 Euros. We can only produce about five Dubplates each week, as that’s about the num­ber of good blanks we receive per week.

The music on Vol. 1 comes from a digital master. On our Neumann VMS-82 we have a digital preview delay made by Daniel Weiss that is capable of 96 kHz. We could just as well use an analog tape as source, but it [would] have to be converted to digital in order to work with our machine. We have played back the DMM Dubplate around 200 times, using test tones such as pink noise. There was no hearable loss in sound and no measurable wear on the stylus. On a regular pressed vinyl there’s a considerable loss of high frequencies after just 50 plays.