A true virtuoso can convincingly render every imaginable piece thanks to his superior technique and musicality. The multimedia player T+A MP 3100 HV is ideally suited as a distinguished representative of true virtuosity. 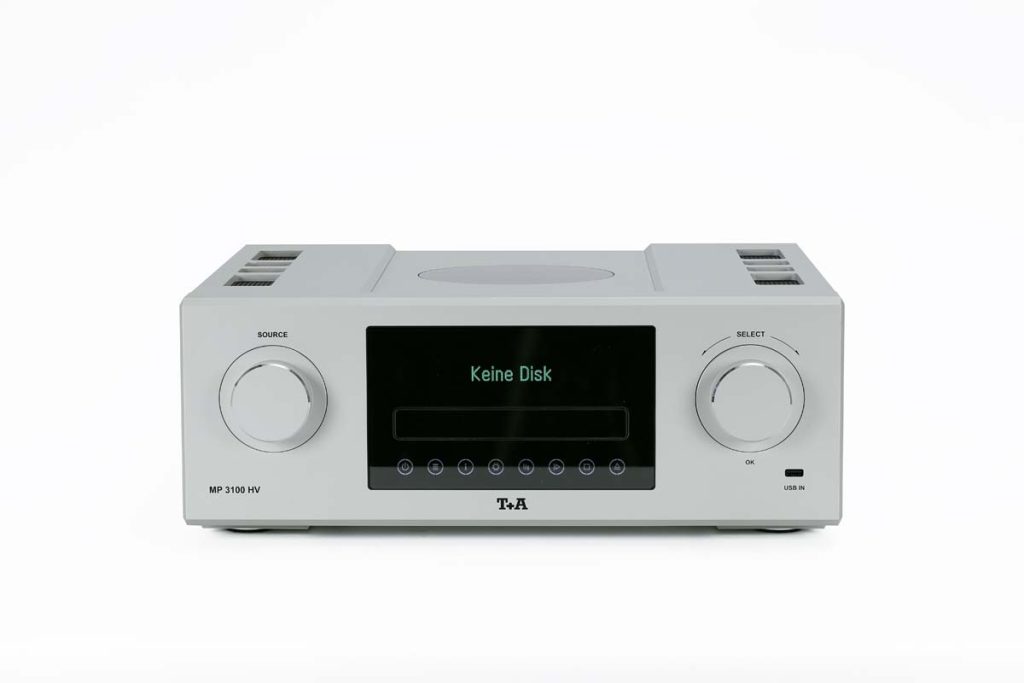 “Theory and application” — that’s the meaning behind the two-letter name T+A, the high-end manufacturer based in the eastern Westphalia city of Herford that has developed and produced premium-class playback systems for more than four decades. The company’s superstars are the eight devices from the HV series: equipment uncompromisingly dedicated to peak performance and zealously celebrated by both hi-fi enthusiasts and the trade press. The youngest member of the elite HV family is the T+A MP 3100 HV, offered at the princely sum of about €13,500. The multisource SACD player, an “(almost) anything player,” can handle all the digital audio world’s relevant formats and signal sources. Unlike its brother the MP 3000 HV, the new player also masters signal processing from DSD bitstream files thanks to the MP 3100 HV’s new SACD drive. Stemming from T+A’s proprietary development, it reads CDs and SACDs with the highest possible quality. But that’s far from all: The noble unit offers the new T+A hi­res streaming board that lets audiophile digitalists use music services such as Tidal and Internet radio as well as “USM Master Mode” and HD streaming from network servers, and enables the connection to a home network via LAN and WLAN. The player also features a versatile tuner that can handle FM, FM HD, and DAB+ as well as a Bluetooth streaming module with state-of-the-art wireless technology for those constantly on the go. Whew. Taking a moment to process all that makes you realize the MP 3100 HV can apparently make multiple devices obsolete. 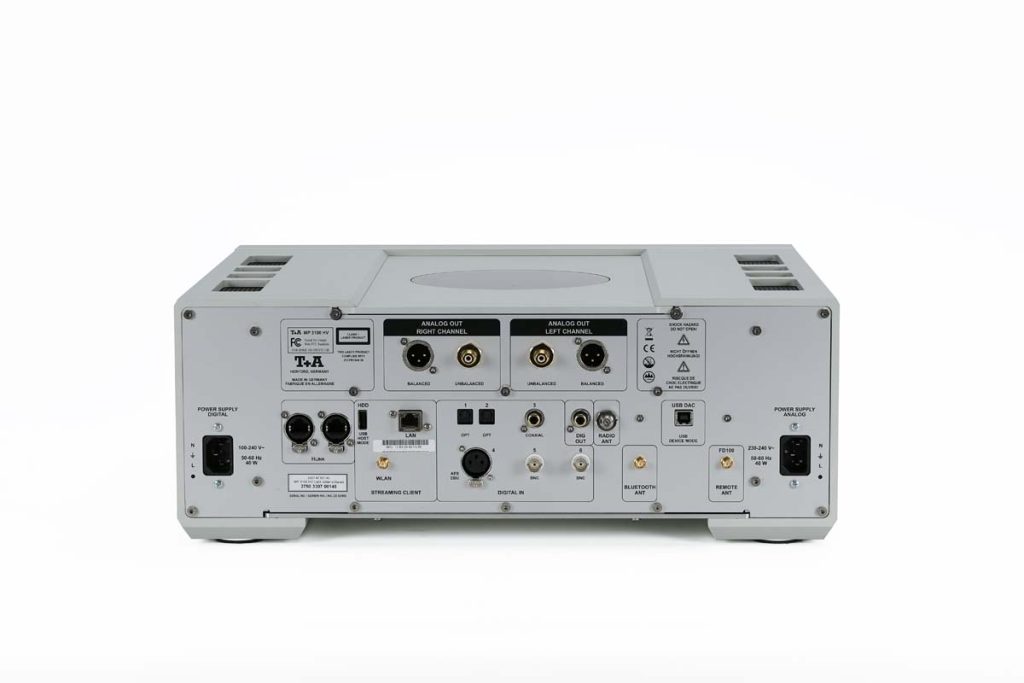 Weighing in at 26 kilos and possessing a size reminiscent of American-proportioned integrated amplifiers, the MP 3100 HV requires a rock-solid location with ample dimensions. Once it’s been set up, the device reigns commandingly over your listening room and, thanks to the tasteful exterior, offers visual appeal. It goes without saying that, even when scrutinized with a very critical eye, the workmanship is absolutely flawless, so we’ll not waste another word on this topic. Glancing at the front, we spot the two large buttons helpfully labeled Source and Select that feature a push-turn mechanism. We also see a central touch-sensitive display where all the settings can be adjusted. The buttons themselves are precision masterpieces that pleasingly caresses the user’s hand, and the easy-to-read display is satisfyingly complemented by the well-thought-out menu navigation. The elegant FD100 remote control included with delivery enhances ease of operation, thanks in part to its handsome display. Those who find the remote too old-fashioned can also control the unit using the TA Control 2 or TA Control app, which ideally should be installed on a tablet and is available for iOS and Android. 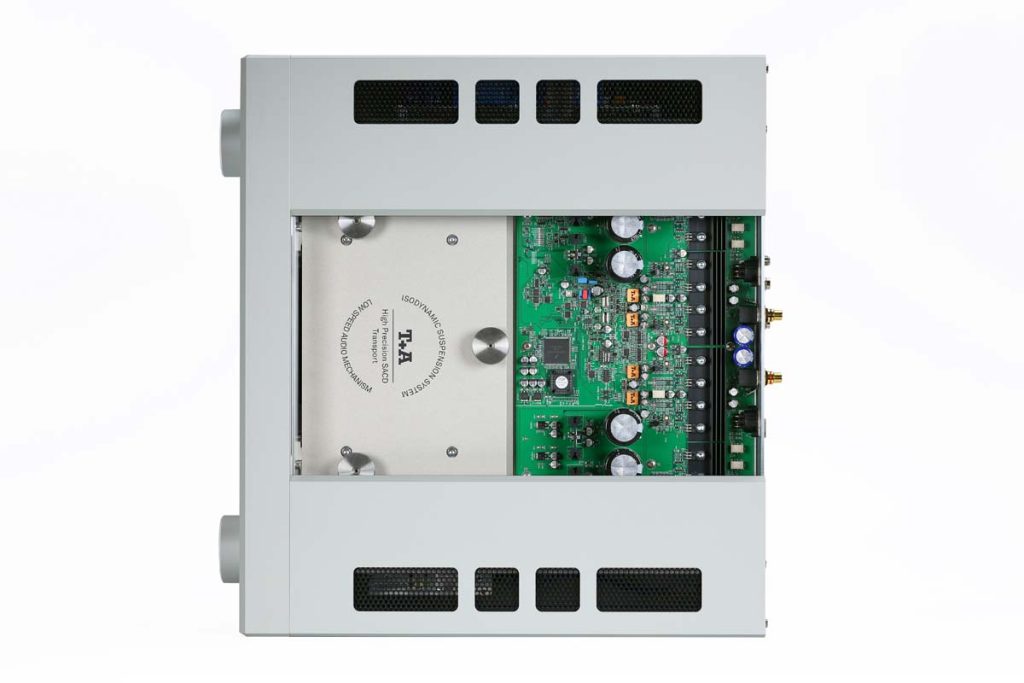 Now let’s have a look at what’s inside the unit: With its drive carrier milled from a solid block of aluminum, the impressive SACD drive is, mechanically speaking, a good match for the 40-millimeter-thick aluminum front panel and the thick-walled housing sides. The interior is meticulously tidy. Five clearly defined sections along the unit’s sides accommodate both the switched-mode power supply for the digital unit and the linear power supply, which has been upgraded with two toroidal transformers, for the analog unit. Yes, you guessed correctly: Each unit has its own lead line to the power supply, which means there are two connecting sockets and power cables. T+A uses this setup because it wants to prevent reciprocal interference — and the company has rigorously implemented this high-end standard. This is also why the MP 3100 HV doesn’t have a power switch: This would make a mockery of the benefits derived from strictly separating the power supply. In consideration of current environmental issues, the MP 3100 HV features an energy-saver function that reduces power consumption in standby to less than .5 watts.

It also comes as no surprise then that the drive, digital unit, DA converter, and analog output stages are strictly separated and that only premium components have been used. 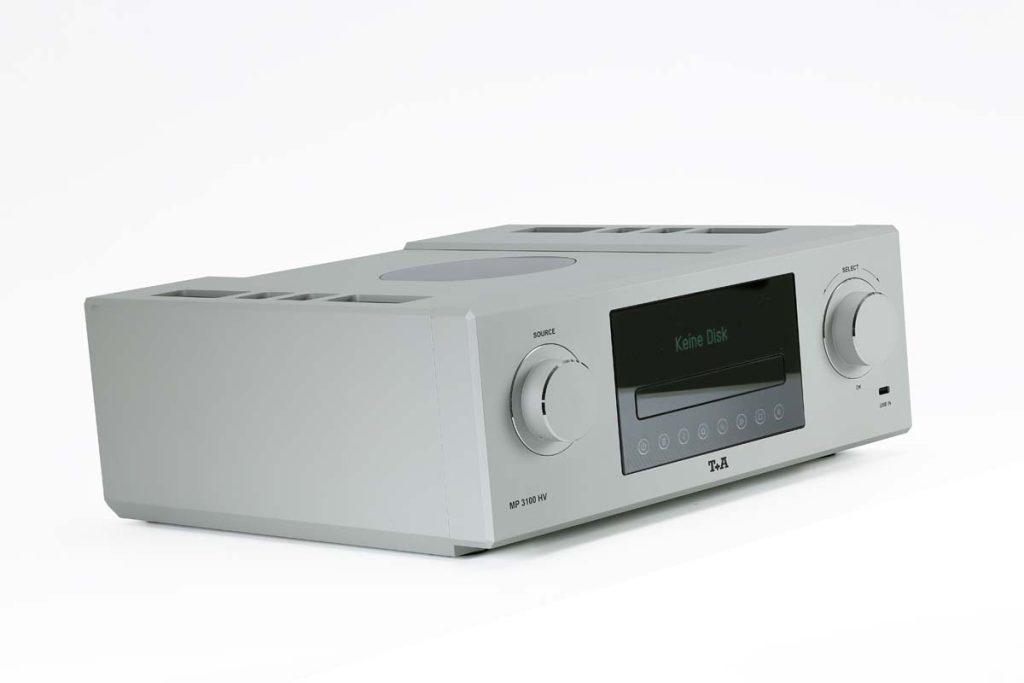 The proprietary high-voltage technology — the term behind the “HV” in the units’ names — enables a higher closed-current supply compared with conventional solutions and class A operation, which shines with its extraordinarily low distortion. Altogether, the technology could also produce a superior preamp. But T+A has consistently avoided taking this step. Consumers who prefer their high-end equipment from a single source will find tailored solutions in the amplifier siblings from the HV family.

Because the MP 3100 HV is a digital device, the signal processing designed by T+A deserves more detailed examination: To achieve the best possible conversion results, DSD and PCM are processed by separate converters with independent, completely distinct signal paths. According to head developer Lothar Wiemann, the resulting isolation of the analog and digital parts eliminates any digital interference. The converters themselves are proprietary developments created by the minds at T+A: For DSD signals, the manufacturer relies on its own fully discrete True 1 Bit DSD converter, which is operated either completely without filtering and noise shaping that impact sound quality or, as an alternative to suppressing the inevitable noise floor, with analog reconstruction filters employing switchable bandwidth. PCM processing is handled by the innovative D/A converter T+A Quadrupel that, simply put, improves the precision of conventional converters by a factor of four. To ensure a curve progression that closely approximates the analog source signal, the MP 3100 HV also uses a proprietary, DSP-supported polynomial interpolation process. Bezier polynomial interpolation produces much smoother curves, in a mathematical sense, through a given number of grid points — or, that is, scanning points. 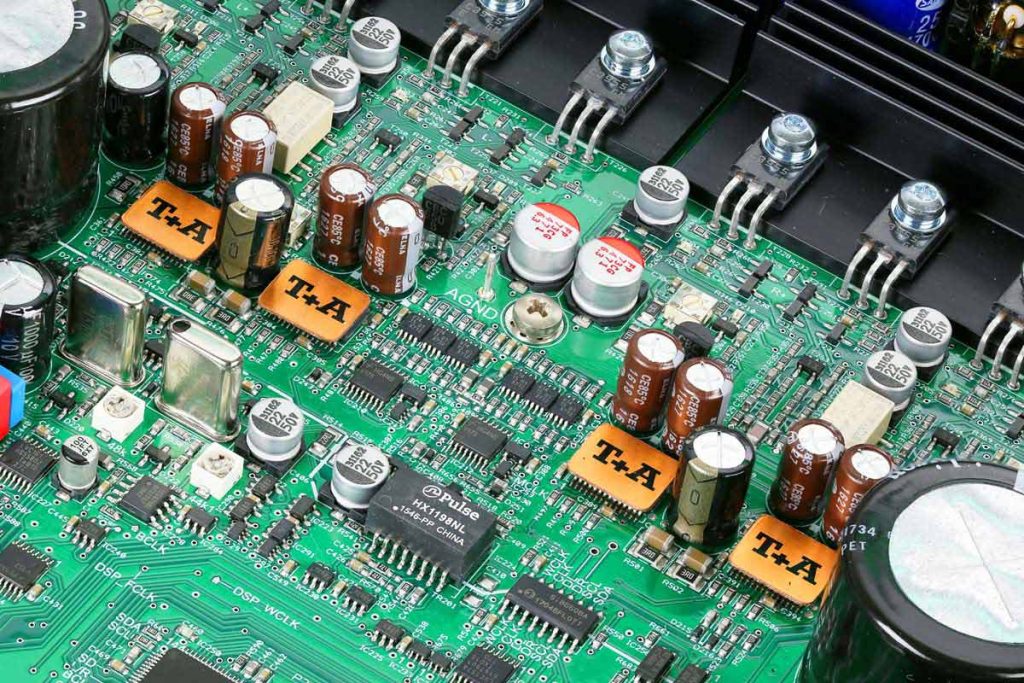 Compared with the conventional oversampling method, digital artifacts such as pre- and post-ringing are excluded. It’s well known that to produce optimal playback data needs to be cleansed of the notorious jitter before D/A conversion, so it’s not surprising T+A relies on its own concept for jitter elimination. This works in two stages: In the first, the data received is processed and decoded. In the process, a rough pulse is taken from the received data, and this is relieved of heavy jitter from the source device and transmission path by means of a PLL switch. Afterward, the integrated microprocessor analyzes the pulse. If it meets certain minimum criteria, the D/A converters are switched to an internally generated “highly precise” master clock with extremely low phase noise. This pulse is completely decoupled from the source device, and jitter interference from the source and transmissions is totally eliminated. If a rough pulse does not meet the minimum requirements, a second PLL stage comes into play — a second “jitterbug” that perfects the first PLL stage and reduces residual jitter by a factor of four. In explaining the process, Wiemann indicated he considered this method, which effectively represents a three­stage reclocking approach, superior to all solutions with external reclockers, stating: “In the MP 3100 HV, the converter master clock is produced directly at the converter and doesn’t have to be transported over long distances. After all, every centimeter of signal path between the clock and the D/A converter significantly diminishes the result.”

The MP 3100 HV is indeed packed with sophisticated technology and an almost shameless abundance of lavish features — but to use it is child’s play: simply connect it, have it play something, and enjoy the music. Rarely has a device required so little programming and user-manual reading. Sure, if the unit is meant to be used as a USB DAC together with a Windows PC, a customized ASIO driver, available for download on the T+A website, has to be installed first. When used with a good software player such as the Foobar 2000, the sound expertise of the company based in Herford, Germany, immediately comes alive. 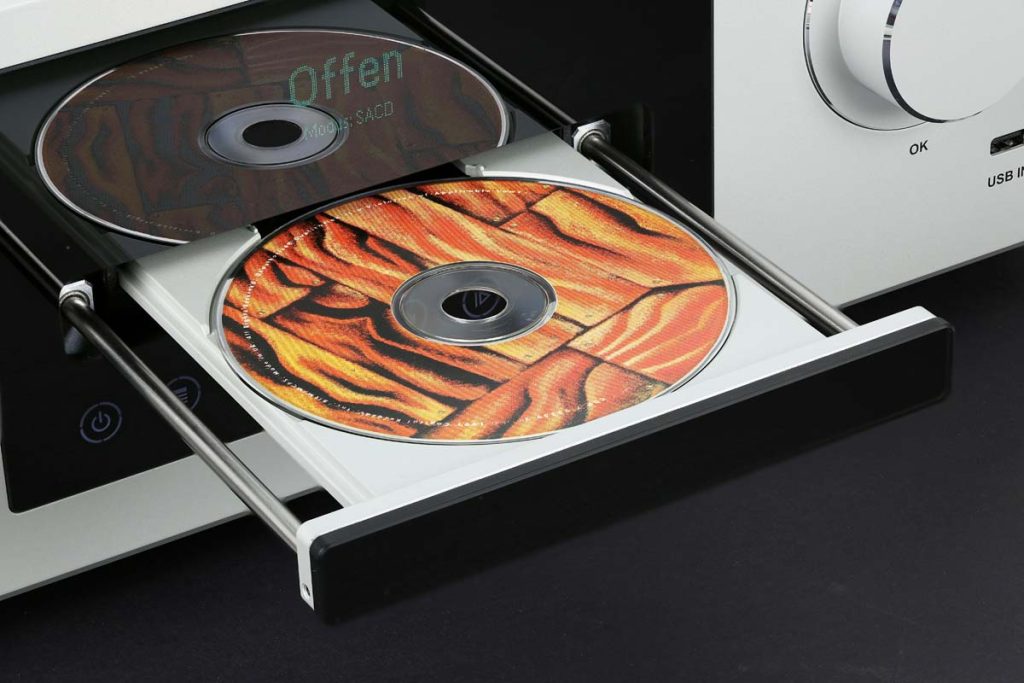 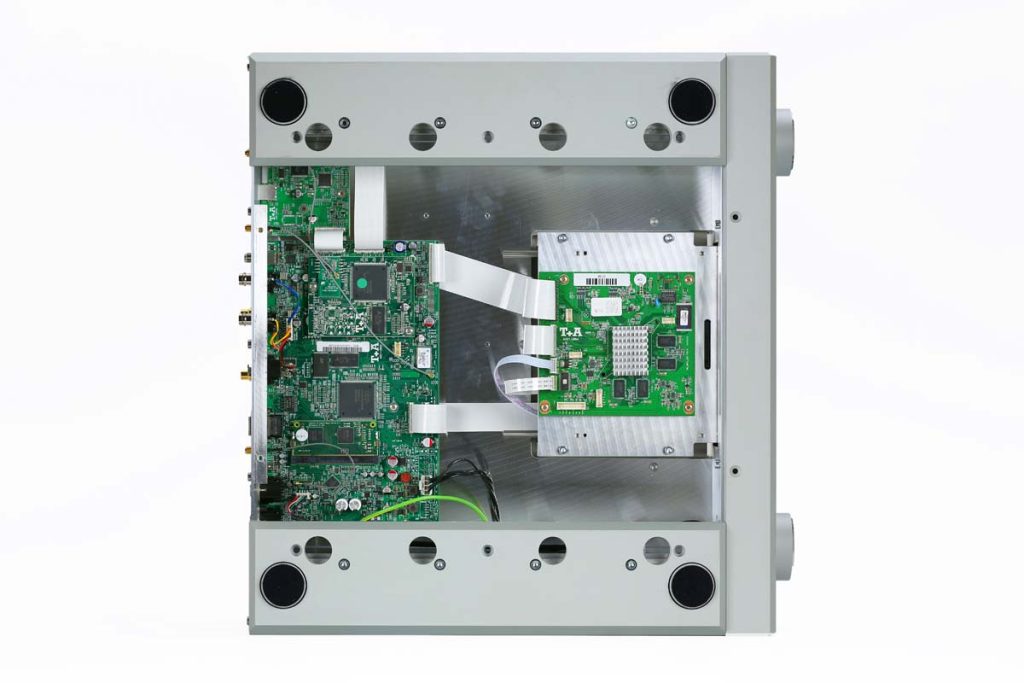 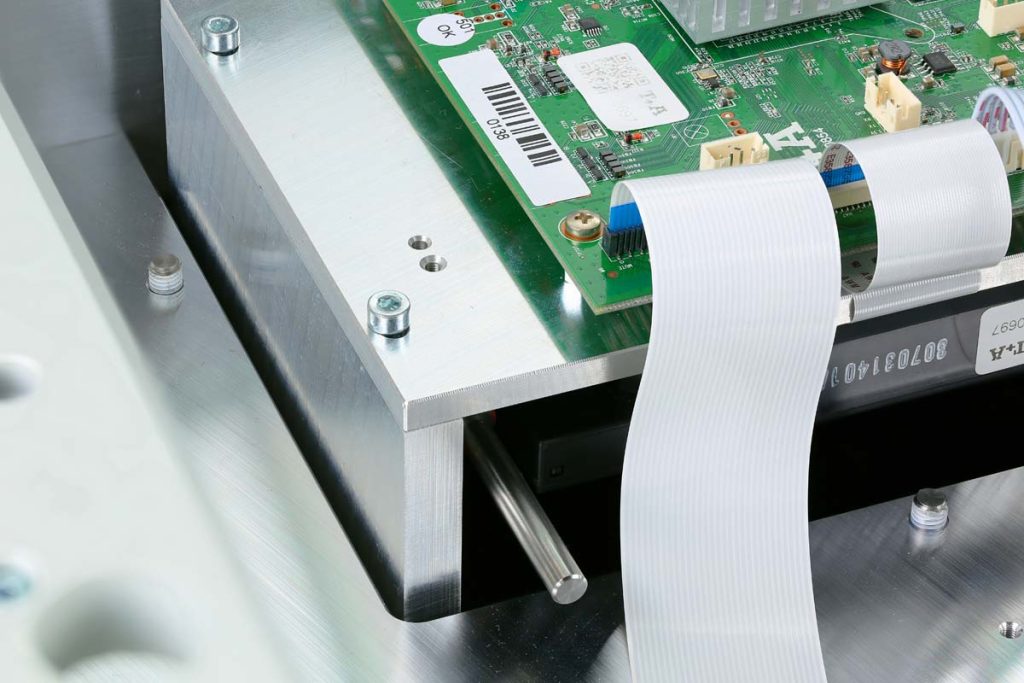 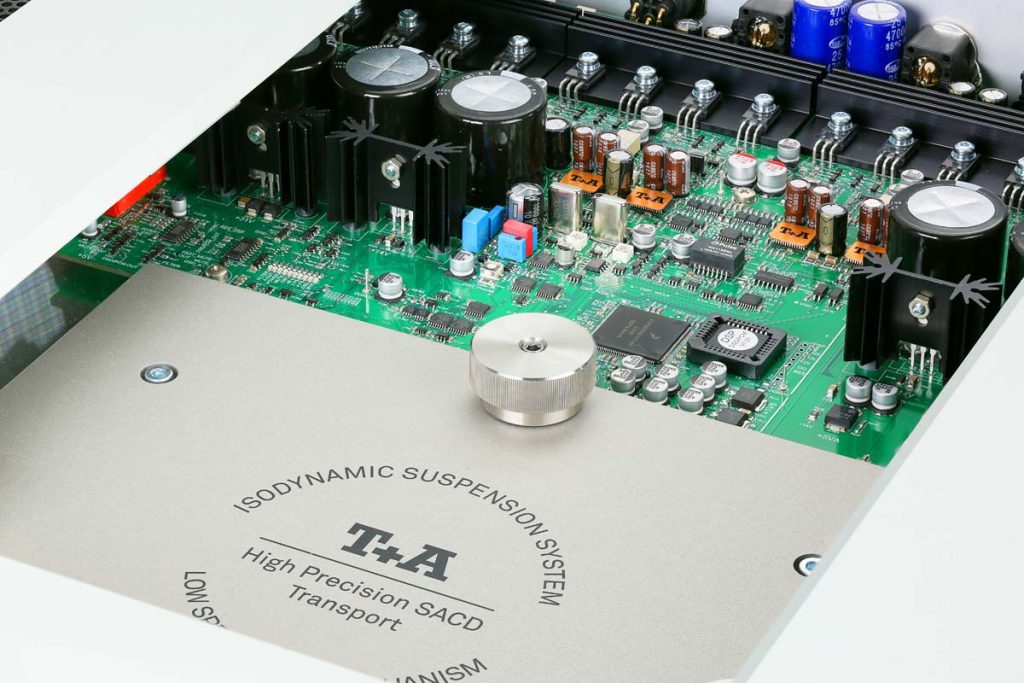 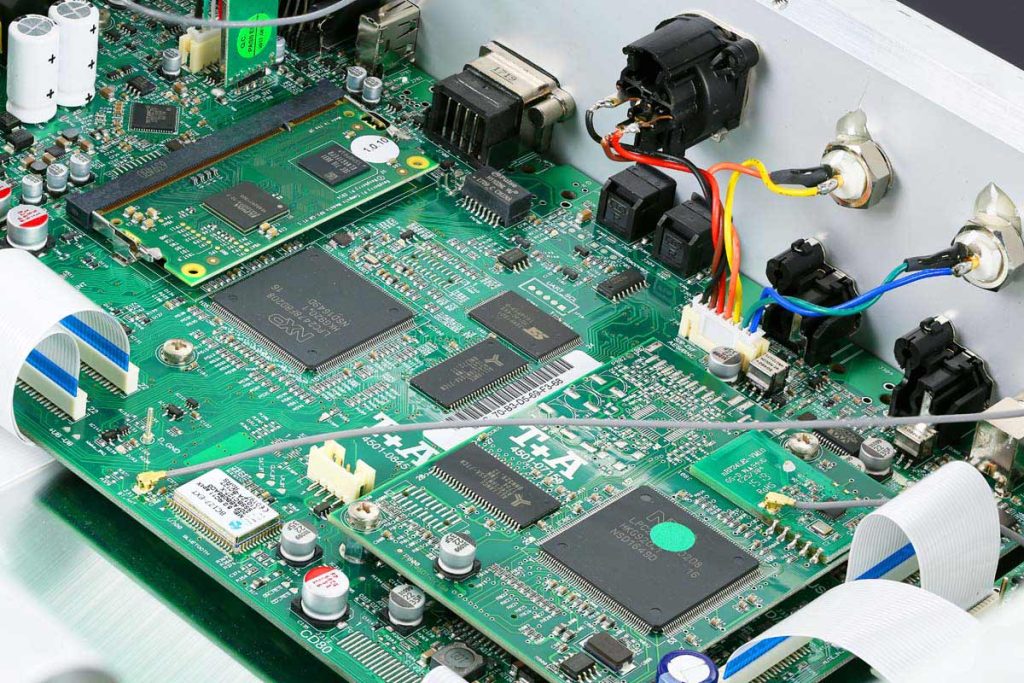 The impressive sound experience the T+A MP 3100 HV delivers as a CD and SACD player will have already won over High-end listeners, however. High-resolution digital music is great, but there are also those audiophile CDs that hold an abundance of fine music of their own. Outstanding productions include One Day In My Life, the 2016 Beatles project from leading German Latin-Jazz guitarist Martin Müller, and the 1983 Standards Vol. 1 and Vol. 2 by the Keith Jarrett Trio. It must be the phenomenal T+A converter that gives a previously unimaginable sound dimension to Müller’s guitar, articulating it in rich colors and the noble sound of the finest classic jazz, as well as to Jarret’s exceedingly lyrical Steinway acoustics: Everything sounds softer, fuller, and more natural. In contrast, even very good converters such as the Mytek Digital Stereo192-DSD DAC produce a sound image clouded by digital haze. These differences are so obvious to the ear that comparison tests with the MP 3100 HV don’t need to go on for days like with others. Instead, the virtuoso from North Rhine-Westphalia creates an entertaining session with the SACD J. S. Bach from expert guitar duo Katona Twins and the always phenomenal Van Cliburn live recording of Rachmaninoff ’s third piano concerto.

Incidentally, the latter is a three-track recording and proves that audio masterpieces could also be created back in high fidelity’s “prehistoric” times. But even when playing today’s choices in sound, from online streaming to hi-res files played on a home network, the master from Herford captivates with thrilling virtuosity. Bravissimo! Yes, it’s always difficult to let go of a good test unit and in the case of the MP 3100 HV, it’s certainly a tearful goodbye. What remains, though, is the vivid memory of an extraordinary musical performance from a true virtuoso.