Album Copycats: Led Zeppelin versus The Song Retains the Name

The good news: It was the last major airship accident. On May 6, 1937, the zeppelin LZ 129 “Hindenburg” reached its destination in Lakehurst, south of New York. For the 33rd time it had crossed the Atlantic; for the 17th time on the east-west route. But this time while landing, the hydrogen-gas-filled airship caught fire and burnt to the ground in a matter of seconds. Thirty-six people lost their lives. The big zeppelins were phased out and scrapped soon after the Lakehurst catastrophe, including, for example, the airship LZ 127 “Graf Zeppelin,” which, until then, had completed almost 600 accident-free flights. Lake­hurst was indeed neither the first nor the biggest accident of this kind. Only four years previously a US Navy airship had plunged into the sea, with 73 dead. But the end of a Nazi zeppelin on US territory two years before the outbreak of the World War II drew a relatively greater amount of publicity. The images from the accident were seen all over the world. Conspiracy theories still make the rounds to this day. “Almost everyone has seen the photo of the burning Hindenburg in their history book,” says the Zeppelin Museum website. Rock fans of the 1970s knew the image of the burning Hindenburg from one album cover in particular. Led Zeppelin’s debut album appeared at the beginning of 1969, in the US first. Only a few months previously they had been called “The New Yardbirds.” Why? Because after the old Yardbirds broke up, guitarist Jimmy Page put a new quartet together — Jimmy Page of all people, the guy the big mouths of The Who had said couldn’t lead a band to save his life, that it would “nosedive” like a lead balloon. 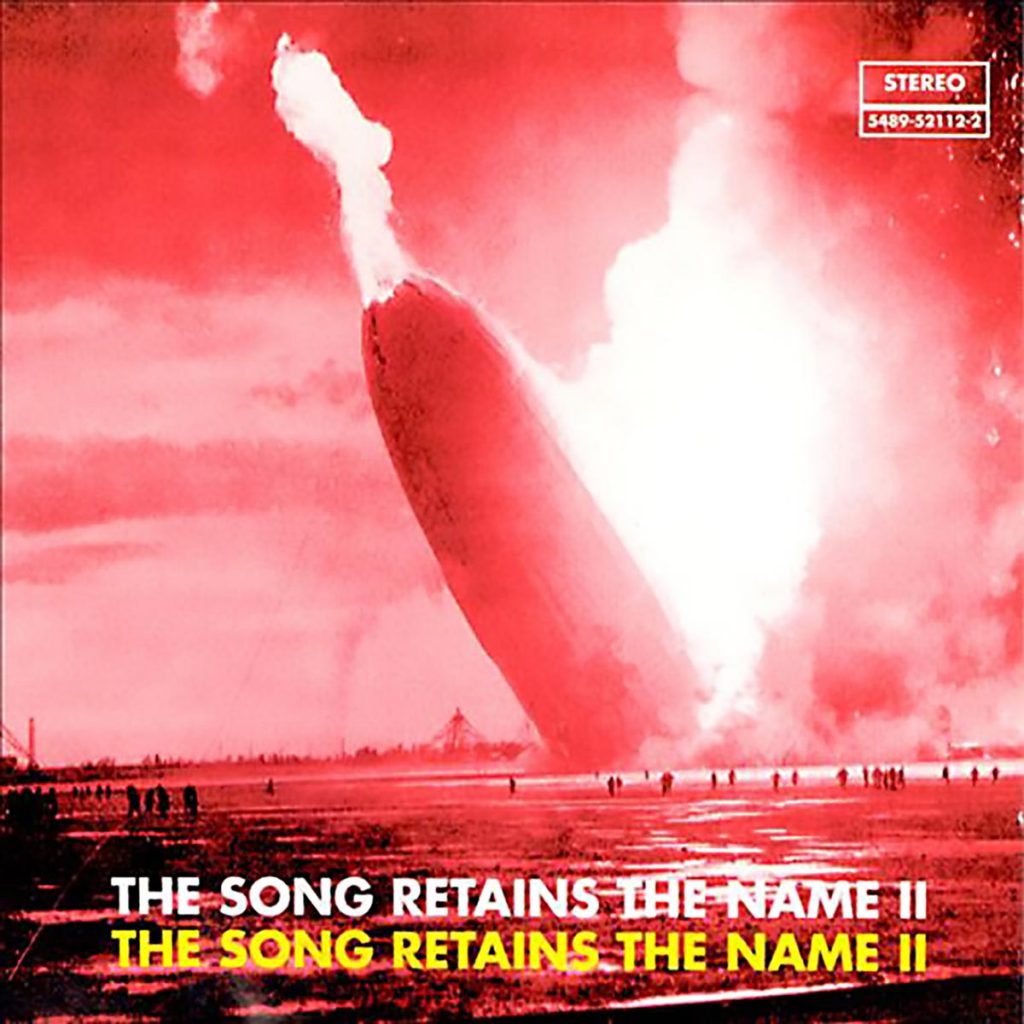 Page never forgot the dig taken at his expense, but he obviously had a sense of humor. “Lead Balloon,” he thought, “not a bad name for a band!” It was then agreed the “lead” would lose the “a” so everyone would pronounce it correctly. And the balloon was subsequently replaced by a (phallic?) zeppelin. The Lakehurst catastrophe was only some 30 years in the past — their parents’ generation still remembered it vividly. Graphic artist George Hardie, who later also created some famous Pink Floyd sleeves, placed the ill-fated Hindenburg on the cover, distorted a little in a pop-art way. It may not have been filled with lead, but plunge it certainly did. So do we still have to talk up this album? Allegedly the production only cost £1,800, but the result changed pop music entirely. Blues pieces from Willie Dixon, acoustic folk guitar and heavy rock numbers — this was the typical Led Zeppelin mixture delivered straight away with the debut album. Songs such as “Good Times Bad Times”, “Dazed and Confused”, “Communication Breakdown” and “How Many More Times” have become rock classics, if perhaps a little delayed. The really big breakthrough to the top followed with the second album, thanks to the massive hit, “Whole Lotta Love.” But the starting template of the debut could hardly have been catchier: The zeppelin in the band name and on the cover image simply stayed for good. Back in the day, a member of the Zeppelin family even threatened a lawsuit. 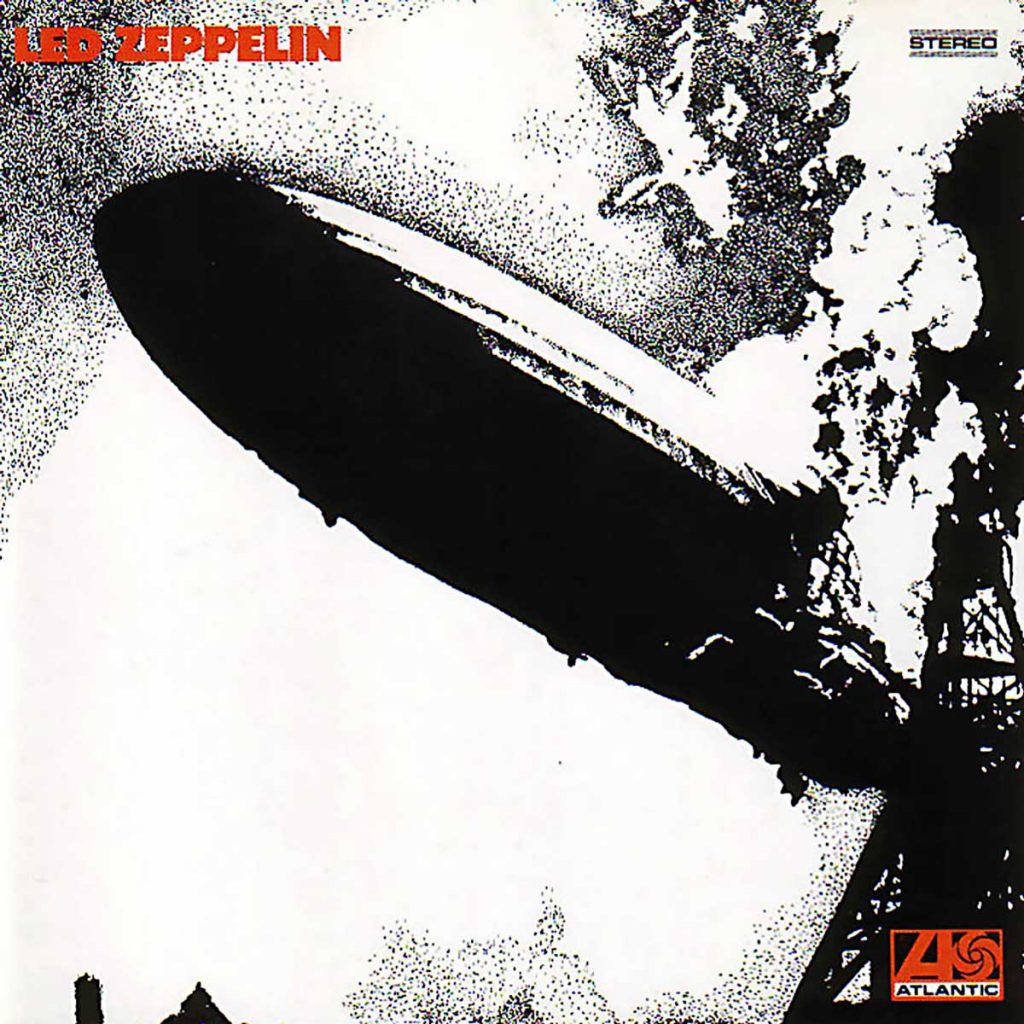 The striking album cover has, of course, been imitated and plagiarized dozens of times — several times no less by Led Zeppelin’s musicians themselves. All kinds of homages to the band use variations of the image of the burning airship. The Californian hard-rock group Great White even replaced their own great white shark with the zeppelin one time. With the tribute album The Song Retains the Name II, the reference to the image is kept somewhat looser. The photo of the Lakehurst accident used here must have been taken just seconds after the other one. The Hindenburg is already tipped to the ground and the rear end has broken off; flames are also shooting out of the tip. The fire engulfed the entire airship in only 34 seconds. The divergent photo is within its rights, as this compilation from 1993 strikes out in its own direction. Unlike the Volume I edition, which appeared five years before, Volume II crosses through surprisingly heterogeneous and humorous stylistics. Thirteen different bands, at the time largely unknown, today largely forgotten, interpret selected songs of various Led Zeppelin albums in very individual ways. The Bad Livers from Texas fire up “Dancing Days” with wild banjos, quirky speech song, tuba and fiddle. The Ordinaires from New York lay a violin solo over their rock version of “Kashmir”, which sits nicely somewhere between violin sonata and shtetl. Mojo Nixon covers “When the Levee Breaks” as southern rock with lots of electric blues guitar. Michael Hall turns “Trampled Underfoot” into a country song, and 7 Seconds from Nevada transform “Misty Mountain Hop” into elementary punk. In “Houses of the Holy” on the other hand, Folkadelic from Texas let their folk guitars chime humorously and sprinkle in a few more famous Led Zeppelin riffs. With Alluring Strange from Memphis, “D’yer Mak’er” becomes a hillbilly song with steel guitar and a raucous soprano saxophone singing “Misty Mountain Hop” to close with. The recording quality isn’t always exactly the best. But the zeppelin does burn!