Visit to Pure Emotion by AW

Curiously enough, volume is rarely one of the criteria used for defining what characterizes a select, high-end loudspeaker. Yet perfect linearity is a key requirement for a sound transducer (even if I assert this only off the record). And the Pure Emotion 1.0 masters this discipline like no other. A visit to a superlative. 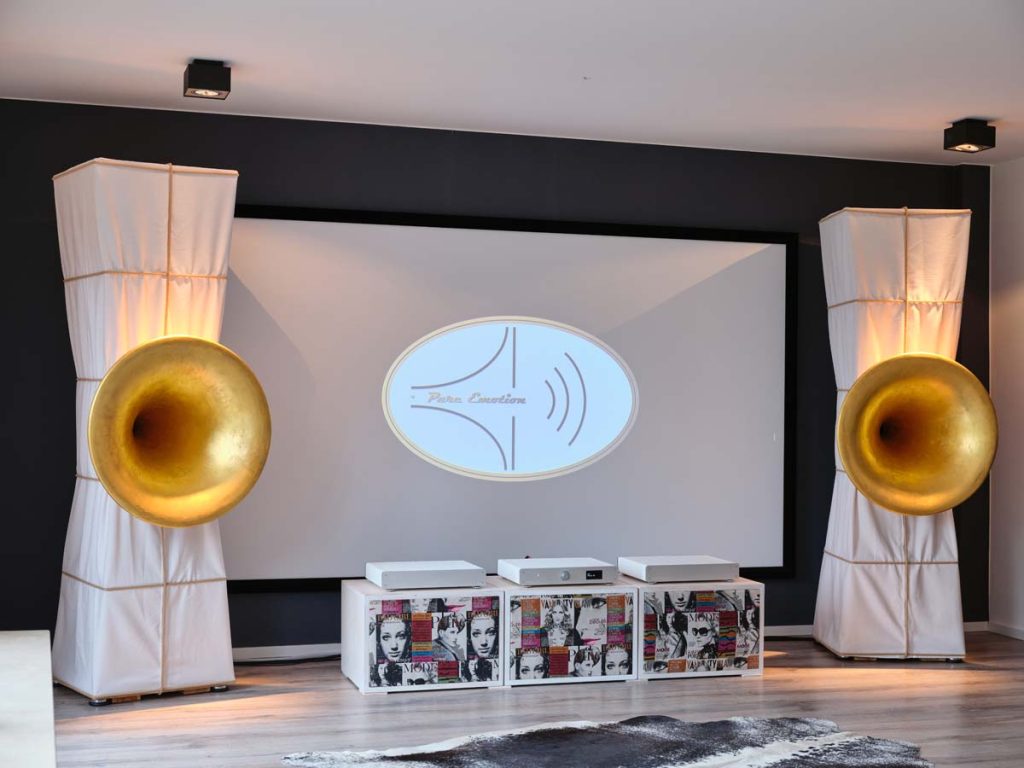 108 decibel sensitivity and a maximum distortion-free sound pressure of 120 decibels, that’s what I had read in the data sheet just a moment ago. An impressive figure for a loud­speaker — for any loudspeaker, no matter if it features an active, passive, classic, or horn design. And yet all I had were figures, which in no way prepared me for what was to follow: “I’ll put something dynamic on and crank it up a bit. Then you’ll hear what the speakers can do,” said a smiling Axel Wurm in his unmistakable Hessian dialect. And with that, he pressed the remote app’s Play button. In the next moment, a drum­mer began to pedal his kick drum with a vengeance while pummeling his snare drum into submission. When the sound reached me, I felt as if an unknown force was ripping the base plate from my brain. The shock wave surged through my body and had me searching, mildly dazed, for something to hold onto. No doubt about it – my visit to Pure Emotion by Axel Wurm left me quite literally impressed!

Any mention of “stable impulse response” would have been a mockery given the two cornute towers rising in front of me. Terms like “elemen­tal force,” “explosive character,” or “steam hammer” would have hit the mark much better. The Pure Emotion 1.0 not only generates superlative acoustic pressure, it also launches its output into a listening space so fast and abruptly, you don’t have time to think about it. 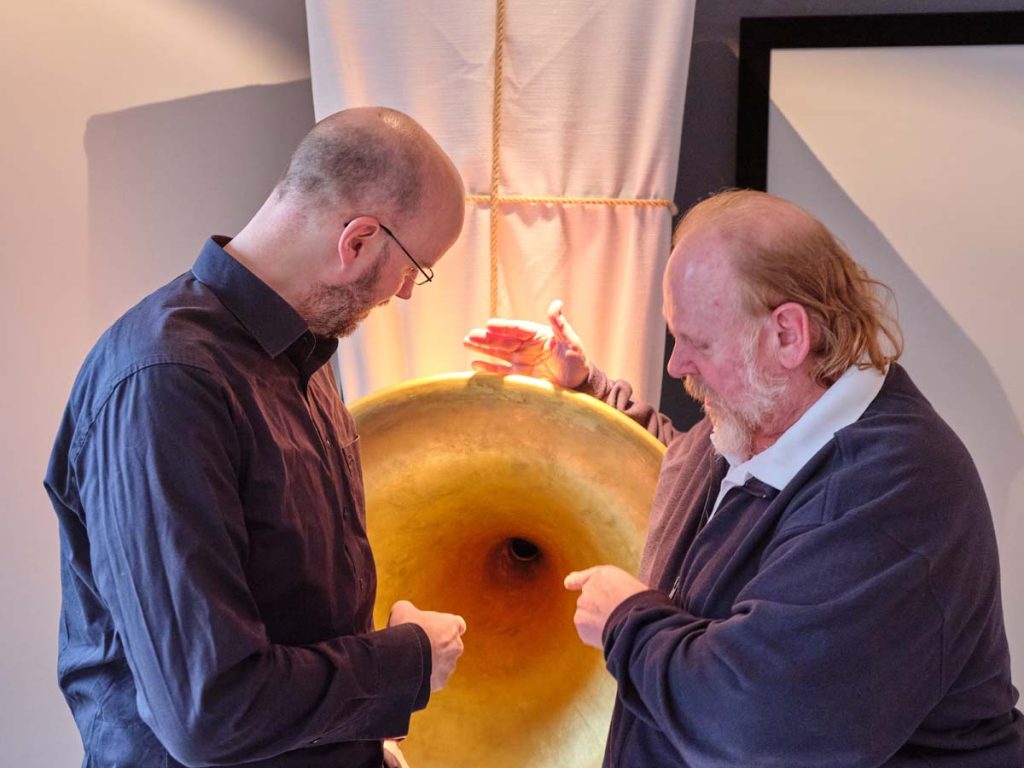 On top of that, as deafening as it may have seemed at its fiercest, the speakers’ broadband impulse resonated with absolute cleanliness, nu­ance and stability, even at this level. And still, the best was yet to come from this floor-standing speaker. “We set them up on a friend’s property out by the lake and then really pumped up the volume: Even at a dis­tance of 30 meters, it was so loud you couldn’t hear yourself speak,” the proud design engineer would later throw out as a small anecdote.

A hobby project with consequences

But let’s start at the beginning: Last fall, we, along with many other vis­itors to the Westdeutsche Hifi Tage (Western German Hi-fi Days) trade fair, unexpectedly stumbled into Wurm’s demonstration room. There in the huge parlor space located in Bonn’s Maritim Hotel we heard an understated, thoroughly stylish Audio Agile front end making music attached to a pair of monumental, exceptionally designed, and, for their size, surprisingly unobtrusive hybrid horn speakers. During the trade fair, Wurm had explained they spent two days and nights tweaking the tuning in that challenging space before the equipment produced music like they wanted to hear. His efforts were rewarded: The loudspeakers were remarkable not only because of their dimensions and their unique fabric covering. They also delivered such a clear sound and played with such speed and dynamism in this huge parlor space that they were showered with multiple standing ovations at the end of the demonstra­tion. A brief “hello” followed by a conversation with the creator of the
1.0 led to our realization: That’s where we need to go! 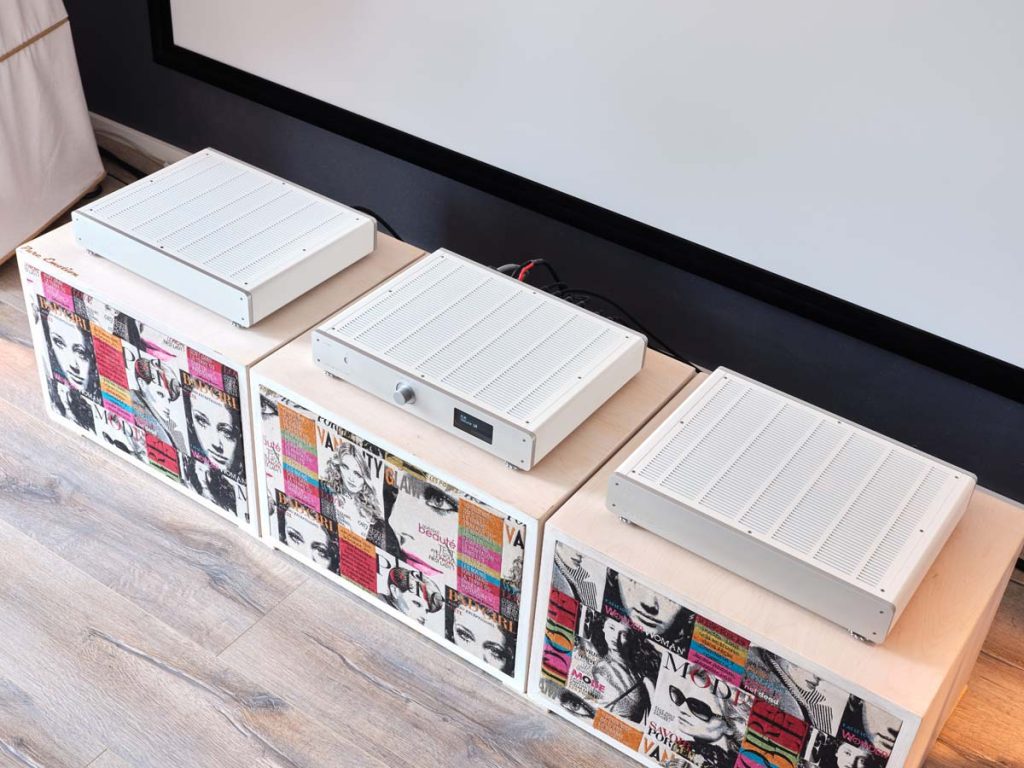 And then I found myself sitting in a room measuring just under 50 square meters plopped in the center of Erlensee near Hanau, Germany, eying up the exact same audio chain that served up such an impressive treat in Bonn. The scene described at the beginning does, of course, reflect one extreme facet of Pure Emotion’s 1.0. The loudspeaker can also exhibit discipline when it plays, expand any stage into a beguilingly large, trim space, and infuse the room with subtly melodious vocals. Wurm explained to us the idea behind this almost unfathomable power, turning to the popular Rolls Royce analogy: No matter how exacting the require­ment might be, the speaker has sufficient coefficient of performance to master it with fleet-footed aplomb. And its brute force didn’t appear in the slightest to diminish its flair for dynamic intricacies and precision, as I would learn from many other musical examples. Even at very low volume, the 1.0 resounds in broadband and in full; it reveals holographic reproduction and doesn’t obscure even the minutest detail.

Every centimeter of the speaker’s 208 centimeters reflects exceptional design. Forming its essence is an amazingly light Swiss pine frame, a material used to make musical instruments. In the experience of this indefatigable inventor, the material enables a transducer of this type to deliver the especially sublime sound. The supporting base was devised to be dismantled in an instant and transported while having as little mass as possible — a pretty tricky challenge to get a handle on.

Wurm spent many years fine-tuning the design for his base, modifying, bracing, and reinforcing it in places, before it was able to withstand the Pure Emotion’s enormous acoustic pressure with zero vibrations and low resonance. 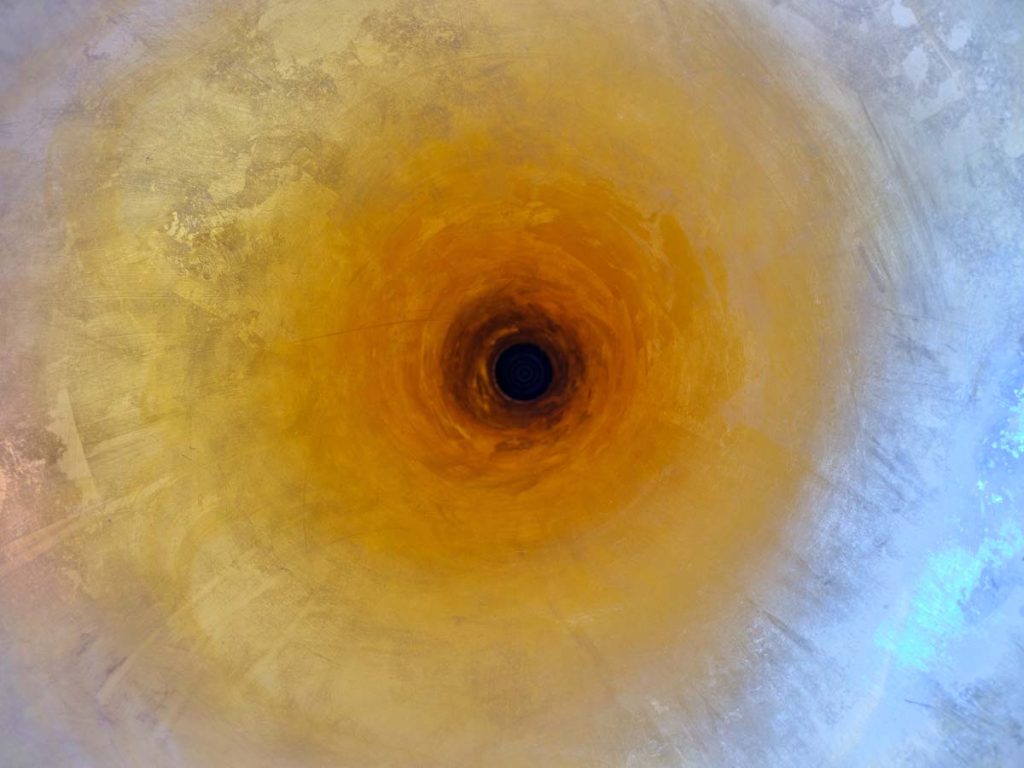 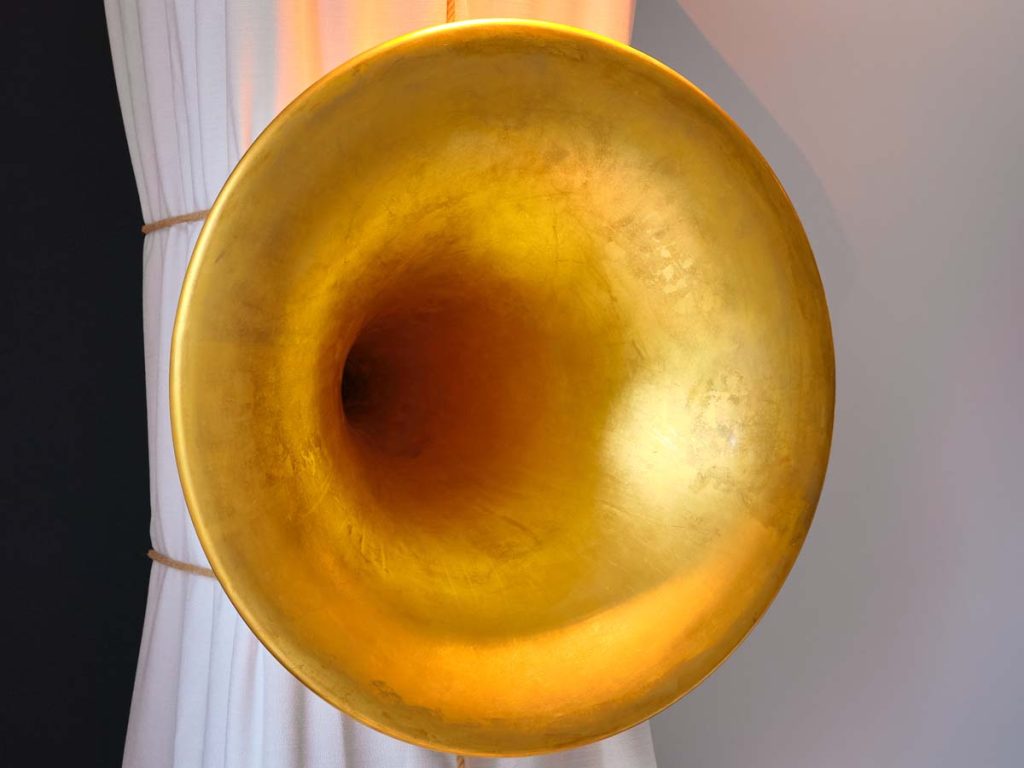 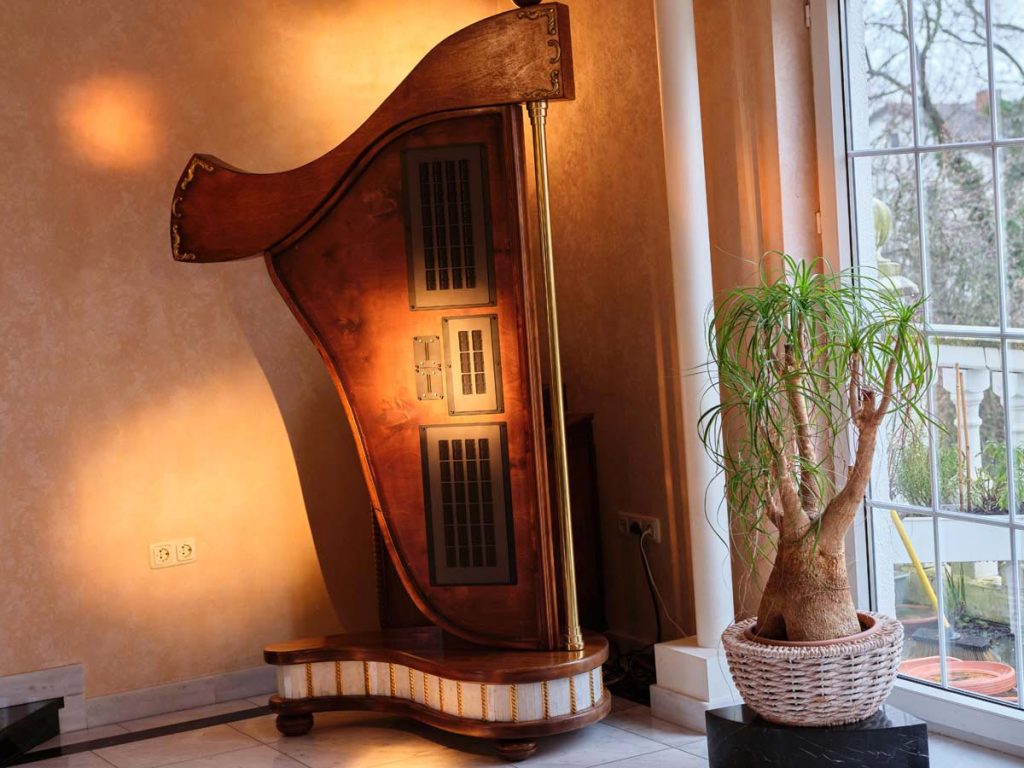 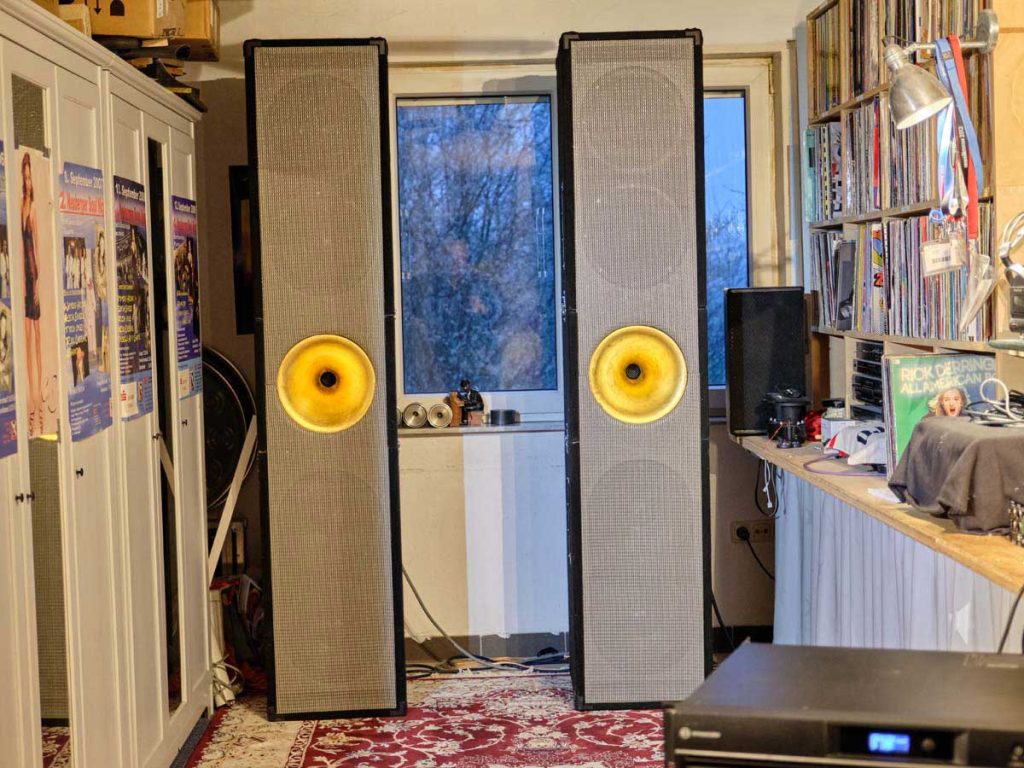 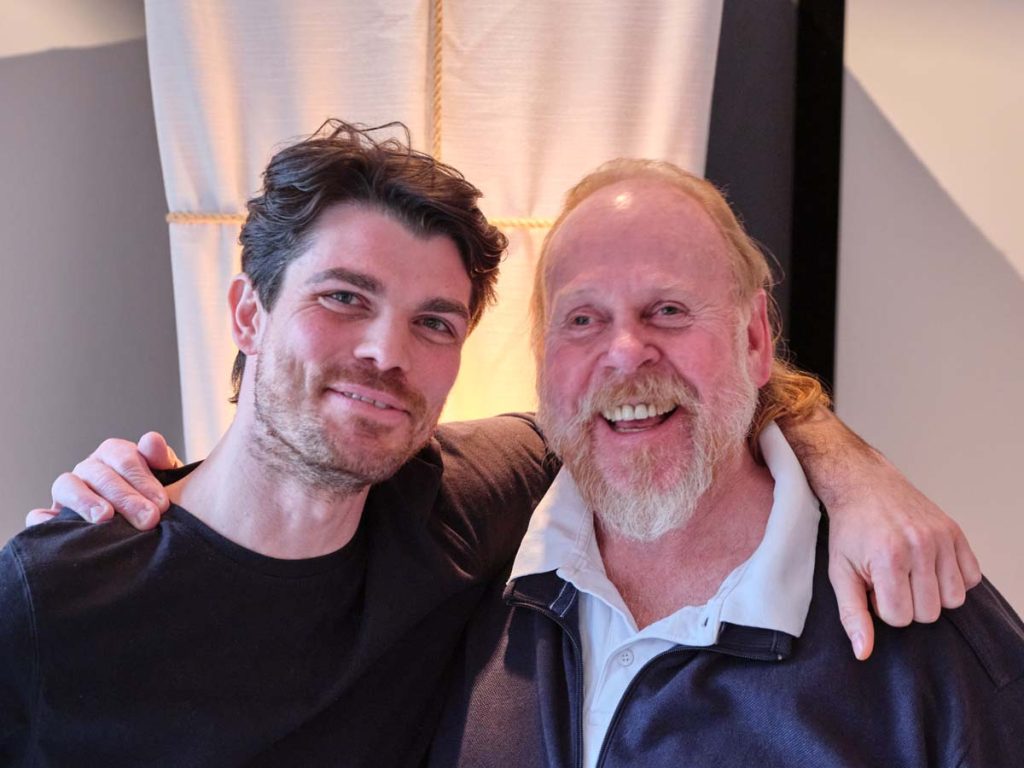 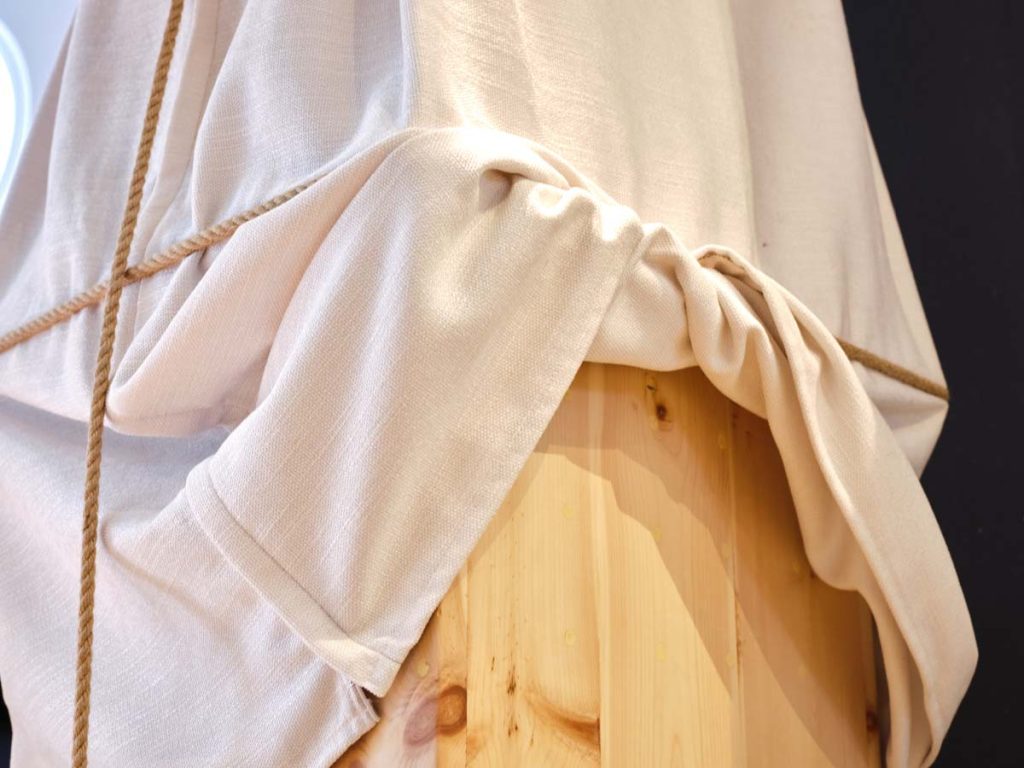 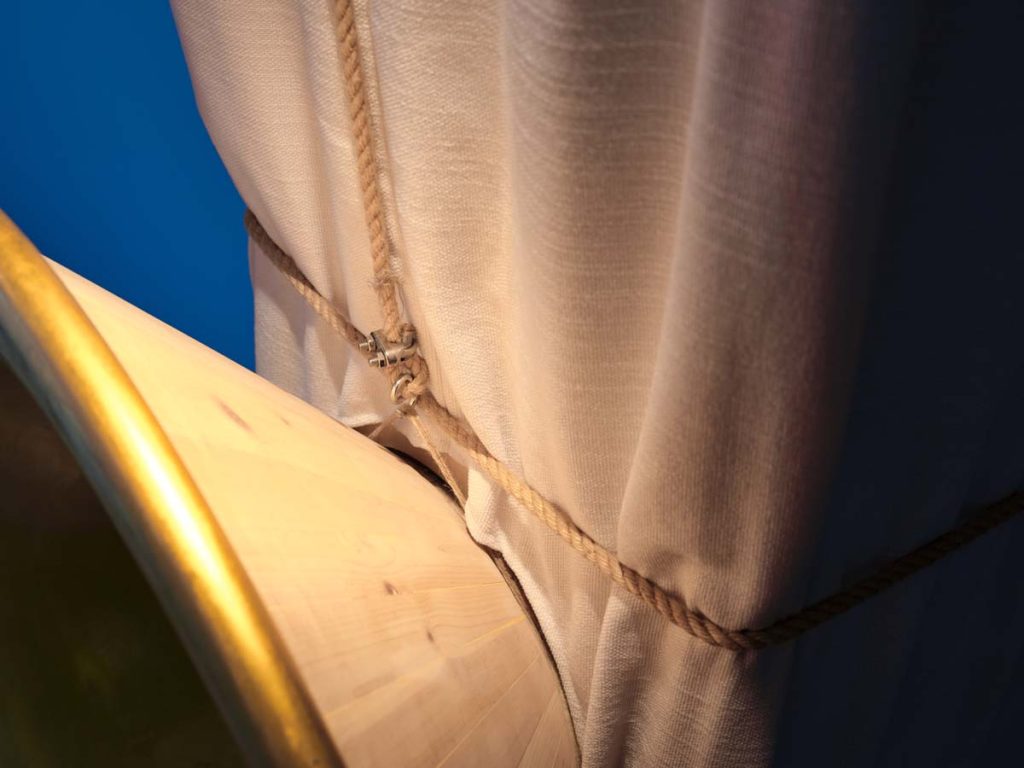 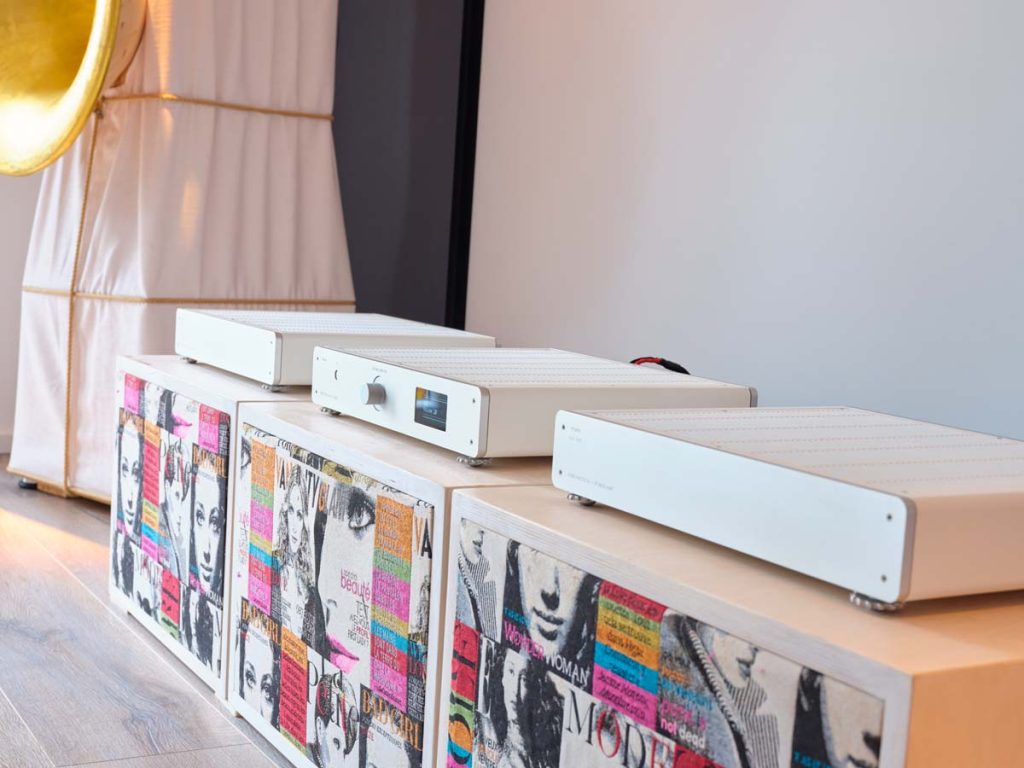 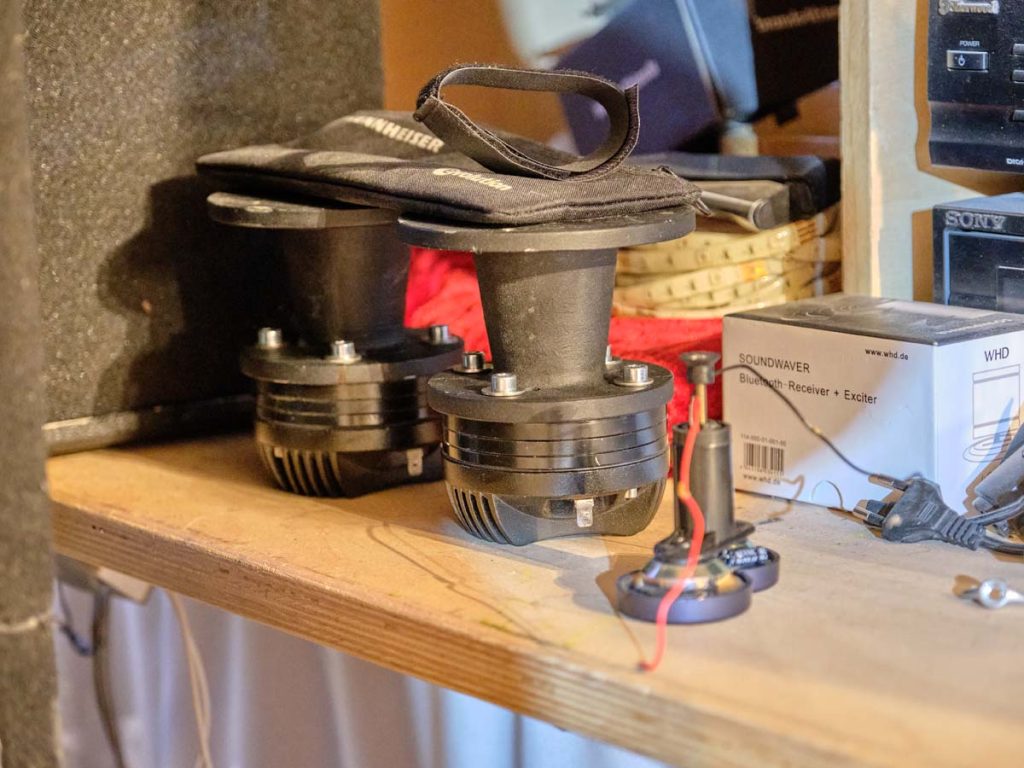 That might sound like trial and error, but it did, in fact, draw on decades of experience. Born in 1959, Wurm had, at the tender age of 13, already embarked on that tour de force that had left its mark on so many design­ers of his generation,: Equipped with a handcart, he retrieved old — even defective — tube radios and TV sets from his relatives, from bulky refuse, and from his wider circle of acquaintances then dismantled them, examined their circuitry, and created something new from them. So by the mid-1970s, it had become completely normal for him to meet his high-fidelity needs out of his own sound transducer resources.

And his passion for high volume had already taken hold back then: Loudspeakers like JBL’s resolute 4343 served the music enthusiast as his archetypes.

A birthday gift in 2000 would eventually awake him from his “deep sleep,” as he would now describe this key moment. His wife, inspired by a good friend, gave him a set of Focal Beryllium chassis. He promptly tried out these four-inch units as midrange drivers in one of his loudspeakers and was astonished, flabbergasted, and simply bowled over at how much sound gain these top-class drivers provided. Vocals suddenly seemed so three-dimensional and natural that the experience marked a new chapter in his obsession:
The range of required sound attributes had now grown to embrace linearity, detailing, microdynamics, and clarity. Wurm was, of course, already familiar with these terms, but at that point they became his passion.

Wurm’s devotion to design and styling constitutes another constant in the design engineering of his loudspeakers. The veteran do-it-yourselfer loves trying out colors, shapes, and exotic material mixes. So he showed us one of his earliest high-end design studies in his living room: loudspeakers in the form of two giant harps, accompanied by huge furniture-format subwoofers.

In his Pure Emotion 1.0, he has integrated the four bulky 30-centimeter bass units directly into the primary frame. In combination with the care­fully calibrated flow port, this quartet still achieves an acoustic pressure of more than 100 decibels at a bloodcurdling 18 hertz. To contrast this bass power with a reasonable counterpoint, Wurm decided at some point in the design process to add a horn design to his midrange-tweet arsenal. Devouring the lion’s share of materials and working time during the making of the PE 1.0, a spherical wave horn with a 77-centimeter diameter proved to be the optimum solution. It’s made of a complex wood-plastic-iron-aluminum composite. His son took 60 hours to apply the 24-carat gold leaf finish on the demonstration model by hand, which was then further worked on and corrected until the desired “shabby look” was achieved.

One final challenge proved to be the loudspeaker’s jacketing: Wurm tried out all kinds of materials, until his wife put the idea into his head of wrapping the speaker in fabric, analogous to Christo wrapping the Reich­stag in Berlin in 1995. What started off as “we can give it a try,” turned out to be spot on: It’s not just that the fabric, held together by natural cords, gives the 1.0 its unmistakable, unique look. The jacketing proved to be the ideal insulation for the four bass drivers as ideal respiratory control of the reflex apertures, and it has ultimately made the Pure Emotion resilient. Scratches, dust, or fading are alien to Wurm’s loudspeaker. And should it get stained, then just wash the fabric by hand and it’ll gleam like new.

Besides, the design also has made it possible to visually customize the sound transducer to meet any requirements its owner might have. Wurm had already trialled versions with printed fabric (take a look at the man­ufacturer’s website), and there have been practically no limits to how the horn can be finished, provided its basic function is not impaired.

The same applies to fine-tuning the sound quality of the giant columns: The loudspeaker’s incredible performance data has naturally entailed a few problems. A transducer that delivers even the lowest octaves at such pressure only actually functions perfectly in acoustically conditioned and enhanced spaces. Given that, this is something you rarely find in residen­tial spaces. That means the PE 1.0 has to be controlled from a computer like a super sports car so it also performs “on the road.” This job is done by an external DSP that sits in a shallow 43-centimeter housing inserted between source(s) and amplifier. The programmable filters operate on the FIR (finite impulse response) principle, which provides three bene­fits: limited latency (computational time lags), low computational power, and, as a result, a potentially very large quantity of bands. As far as the loudspeaker’s physical options are concerned — and in enclosed spaces these are practically infinite — the 1.0 can be fully customized to suit the listener’s preferences. Neutral, colored, no frills, full-bodied: Whatever you like, it’s allowed.

The Pure Emotion thus fulfills all the criteria you would expect of an exclusive super speaker: Its design and construction are unique, every detail on the handcrafted loudspeaker can be customized to meet the requirements of its future owner, and it delivers superb performance in tandem with every conceivable amplifier. Yet that’s not the end of the story: Axel Wurm is aiming to provide his 1.0 with a younger sibling in the foreseeable future — the prototype is already being put through her paces. That means we’ll be hearing a lot more from this resourceful native of Hanau…