Revolution Of The Disregarded

The weakest link of the chain is the connection. In the case of a stereo system, the common RCA plug is therefore to blame. Before WBT came on the scene, it was usually ignored. 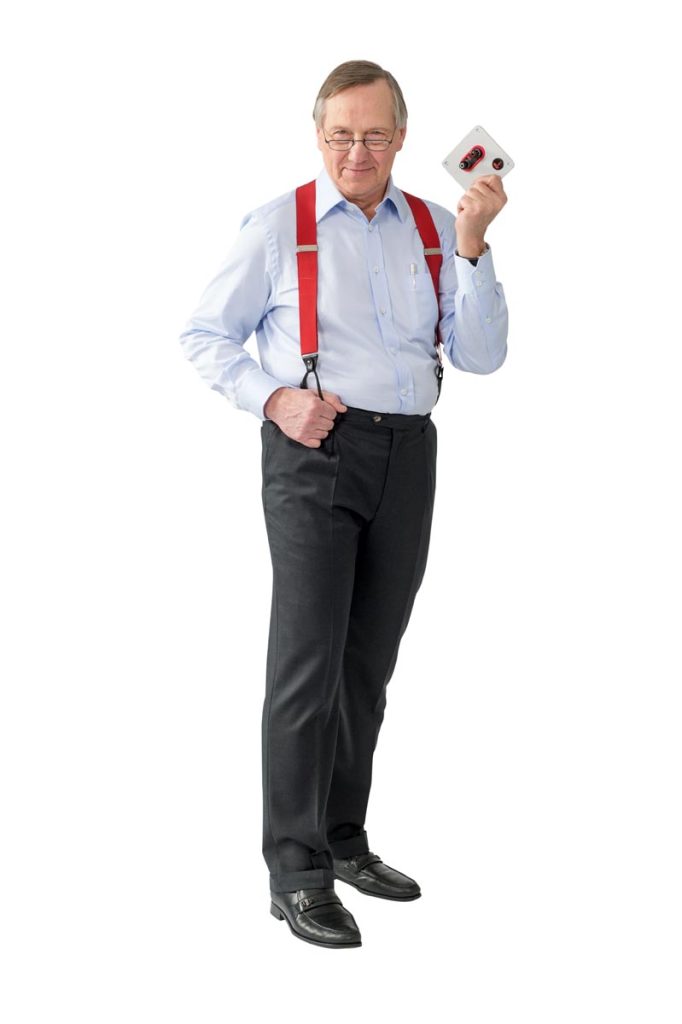 Shortcomings that could easily be eliminated are frequently accepted without complaint or pushed to the back of people’s minds, because they seem irremediable. An ingeniously simple idea is sometimes all it takes to overcome the problem. When technology and music fan, Wolfgang B. Thörner, was no longer prepared to have his enjoyment of his hifi system ruined by non-standard RCA plugs, he soon realized that the solution to the problem didn’t require rocket science but rather simple precision mechanics. 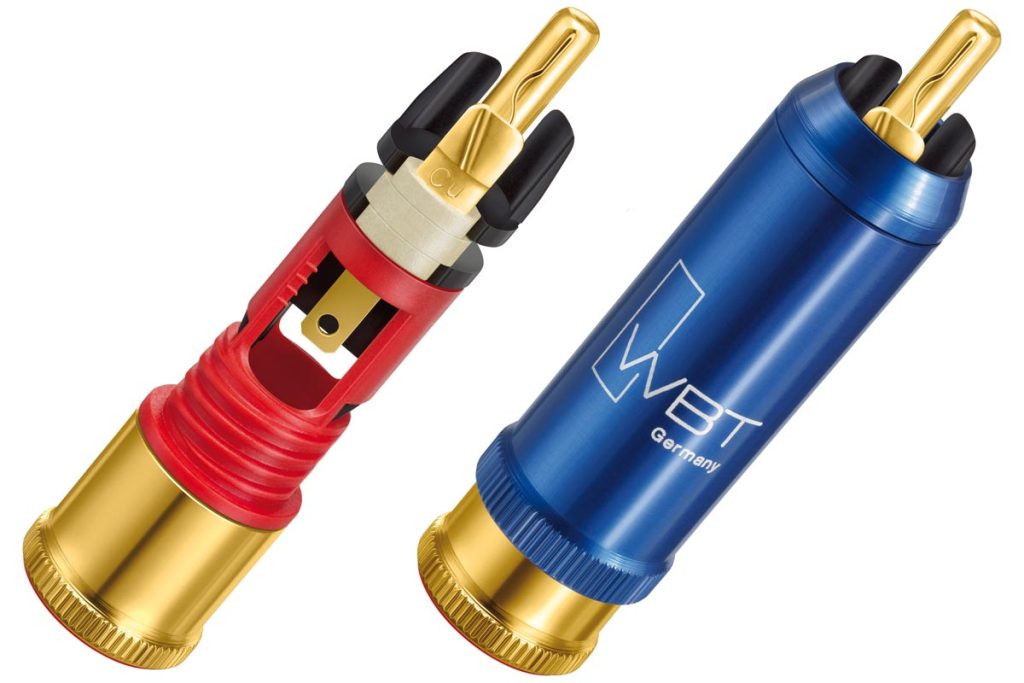 Ultimately it was his father’s fault that Wolfgang Bernhard Thörner launched his company, WBT, in 1985. Had the passionate do-it-yourselfer not bequeathed his penchant for technical details to his son, the latter would possibly never have hit on the idea of occupying his time with hifi component plug connections, despite his love of music. While the father lived out his passion on his model railroad, the son was really into electronic devices from an early age and as a schoolboy spent his leisure time constructing loudspeakers and amplifiers. After finishing junior high school at a boarding school in Lippstadt, he then however opted for a career in a quite different profession. In his home town of Osnabrück he did a wholesale and export management traineeship at the vehicle component and fastening technology manufacturer, Gebr. Titgemeyer, and in 1965 he joined the vehicle and bodywork business, Karmann, which back then manufactured VW’s Karmann Ghia model as well as Beetle convertibles. There he rose through the ranks from MRP controller and technical salesman to Assistant to the Purchasing Director. After gaining five years of career experience, he obtained an industrial management qualification from the CIC, without having to complete another three-year apprenticeship. Despite this additional qualification, he then realized however that his future career prospects were very limited if he didn’t obtain a university entrance qualification. Thörner therefore decided in his mid-twenties to go back to school after more than ten years on the career ladder, and belatedly gained his high school qualification at an adult education center. In parallel, he attended follow-up seminars at BBS Pottgraben (vocational college) in Osnabrück and then completed a college degree in business administration. After graduating in 1975, he initially returned to Karmann, before going on in 1983 to study psychology at Ruhr-Universität Bochum. Wolfgang Thörner associated that course of action with the vague idea of developing strategies to help improve the sometimes burdensome interpersonal relationships in industrial working environments. Even though this idea ultimately turned out to be an illusion and he prematurely terminated his degree course after just three semesters in favor of setting up his own business, some of the insights he gained would nevertheless later turn out to be useful as he searched for ways to market his products.

All those years Thörner had mainly devoted his leisure time to his music collection, and whenever possible and necessary, he added new components to his hifi system. As early as his mid-twenties, he was the proud owner of a high-end system, consisting of a Michell Transrotor record player, a Tandberg receiver, a Braun tube amplifier and a pair of Acoustic Research AR-3a loudspeakers. While his electronic components got better and better in subsequent years, there was however no change as far as the lack of plug connection quality was concerned. The inconsistent workmanship in particular of the RCA plugs and jacks, which back then were almost without exception cheap makes from Asia, irrespective of brand, kept on resulting in signal transmission disruptions through complete loss of sound. While to start with this was still an annoying but acceptable inconvenience, he grew more and more aware with every technical enhancement of his stereo system of what a key impact plug connections as the weakest links in the chain have on music reproduction. After his degree of acoustic suffering reached a critical point around 1980, Wolfgang Thörner decided to attend to the matter himself. He called former colleagues at Karmann and inquired about the address of a turning shop that might be able to manufacture premium plugs. However when he was asked about the exact diameters of the positive and negative poles, he was left with no alternative, in the absence of any official norms, to traipse round different hifi stores armed with a sliding caliper and measure the plug connections of as many devices on display as possible. This exercise revealed that the outer diameters of the center pins (incorporating the positive pole) on RCA plugs varied between 3.05 and 3.45 millimeters, while the diameters of the external contacts on the jacks (incorporating the negative pole) measured between 7.95 and 8.55 millimeters. The logical consequence of these findings should in actual fact have been to replace the RCA connection with a new, precision-standardized plug format. In view of the fact that more than 98 percent of all audio devices feature RCA connectors, enforcement of a new standard had to remain an intellectual pastime. Instead of devising an alternative solution, it was therefore important to find a way of neutralizing the Cinch connection’s weaknesses. Finally Wolfgang Thörner came up with the idea, modeled on the chuck of a drill, of adding a collet chuck mechanism to the outer contact of the plug, by means of which the plug could be adjusted to match the various outer diameters of the jacks. The prototype of his WBT-0100 plug was completed in less than three months. After registering the patent, he first of all asked himself whether he should sell his idea or market it himself. The enthusiastic reactions of various hifi dealers to whom he presented his invention quickly persuaded him to venture setting up his own business. Given that he had spent all his savings on developing the prototype, he first of all had to find a provider of a loan. As coincidence would have it, Sparkasse Essen was on the lookout for investment opportunities for its newly established investment company at this exact moment and provided Wolfgang Thörner with start-up capital of 500,000 DM, which enabled him to launch his company, WBT, and start production of his plugs in Essen. 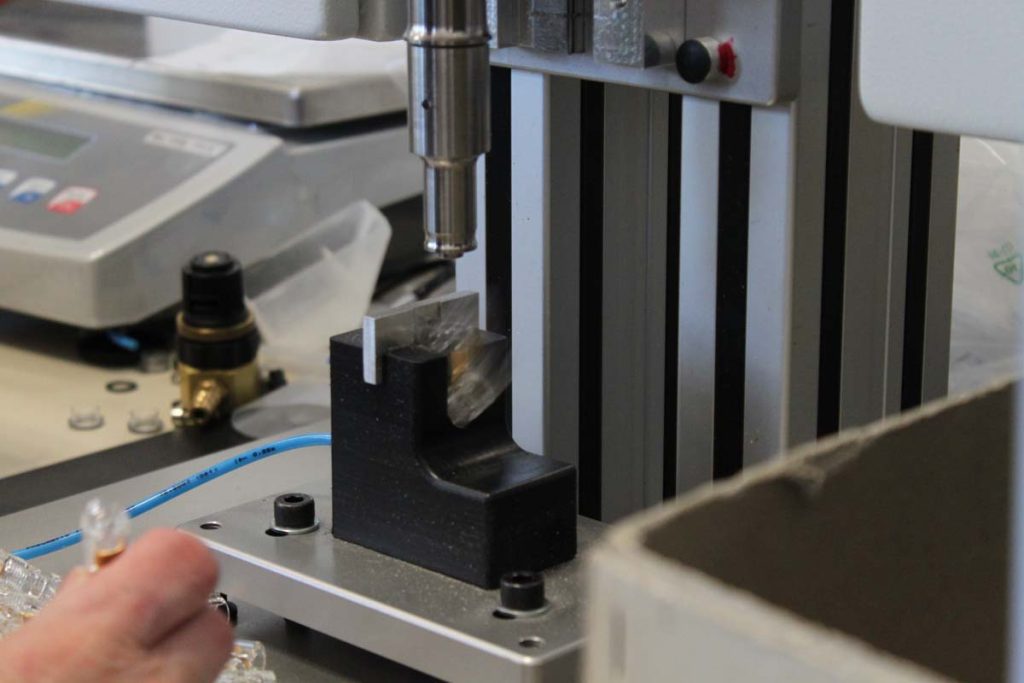 Subsequently Thörner’s plug connections quickly gained a foothold in the market and attracted international attention, meaning the start-up was soon receiving orders from all over the world. More than 80 percent of the company’s output is now exported to 42 countries particularly in Europe, North America, Asia and Oceania. In addition to selling through specialist retailers, OEM business, which now accounts for 60 percent of sales, rapidly gained importance. WBT’s major success however soon attracted the attention of hardball-playing competitors, who were distributing significantly cheaper rip-off copies produced mainly in China, Taiwan and Singapore, and making WBT’s life difficult. Given that there is still no Bilateral Legal Assistance Agreement between Germany and China, Wolfgang Thörner believes the enforcement of patent rights in such cases continues to be extremely difficult, especially since all kinds of products can now be easily ordered on the Internet. “Although the well-known eCommerce platforms react quickly to notifications from rights owners and block the providers concerned,” Thörner explains, “they quickly resume their illegal sales practices under new names.” The only possibility of competing in the market place despite these dishonest methods is to keep on enhancing one’s products, the company’s founder believes.

As part of their research for the purposes of continuously improving Cinch and loudspeaker connections, Thörner and his employees discovered that the solid metal connection elements in the Classic range that WBT initially sold also had disadvantages, despite their solidity. As in capacitors, the metal bodies act like temporary electric storage and therefore have a negative impact on signal dynamics. In addition to these “mass storage effects”, eddy currents also have a more substantial influence on signals than previously assumed, according to WBT findings. The magnetic field induced by these eddy currents that counteracts the surrounding magnetic field produces the so-called skin effect at higher signal frequencies — an increase in resistance inside the conductor causing the current flow to shift to the conductor’s outer areas. According to Thörner, the consequences of this are non-linear signal distortions, which cannot be corrected. In order to minimize such effects, WBT invested a great deal of money in developing the nextgen range at the start of the new millennium. Instead of using turned connectors made of solid brass, this system uses signal conductors made of pure copper or fine silver, which are stabilized by special plastic sheathing. This method not only significantly increases conductivity but also reduces metal mass by around 90 percent, which according to the manufacturer noticeably increases both the substance and the three-dimensionality of acoustic patterns as a result of this lessened mass storage effect. Furthermore extensive elimination of eddy currents delivers a clearer signal. According to Thörner, although metrological verification of these electromagnetic phenomena is still proving difficult, sound tests conducted with blindfolds however left no doubt as to the acoustic improvements achieved. Besides RCA plugs and jacks, the WBT range also includes jack plugs, cable lugs and pole terminals. Thanks to a wave impedance of 75 ohms, the plug connections and jacks are able to transmit broadband analog and digital signals of up to 1 gigahertz. Apart from the quality benefits, production of the nextgen range is even more resource-efficient and generates lower emissions by economizing on valuable copper and zinc — two points that are of major importance to WBT in addition to digitalization with the objective of setting up a smart factory featuring self-managing production facilities and logistics systems. 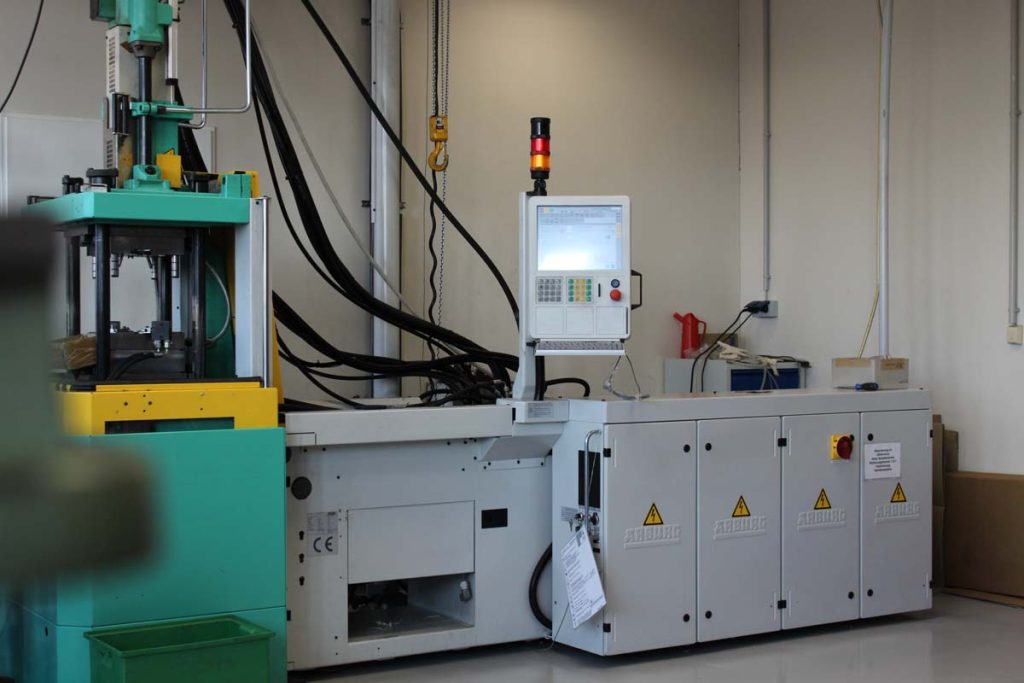 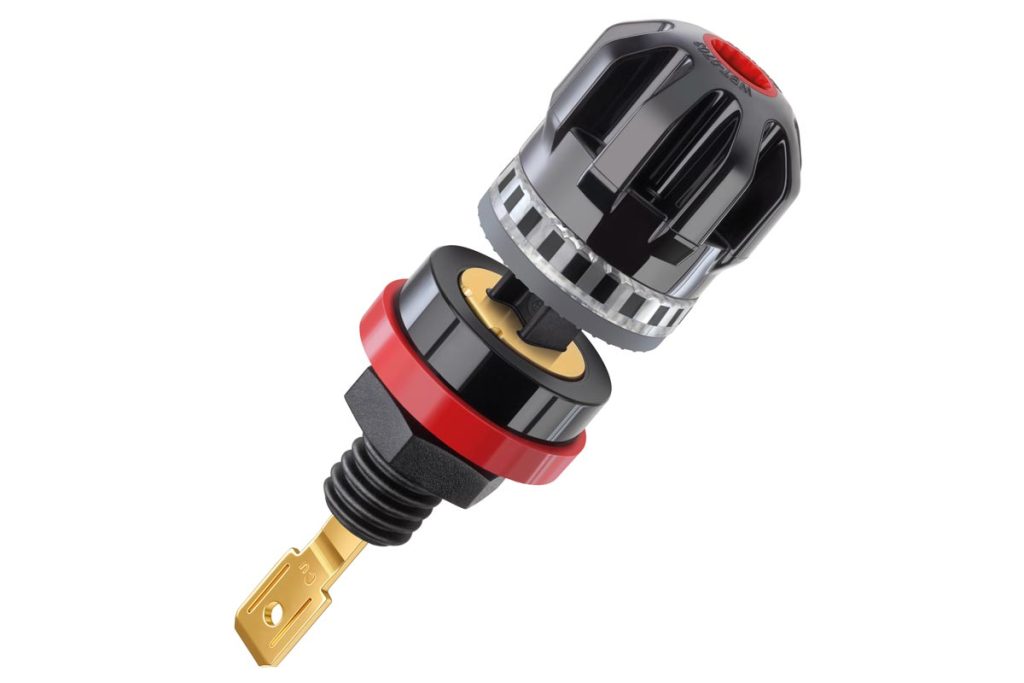 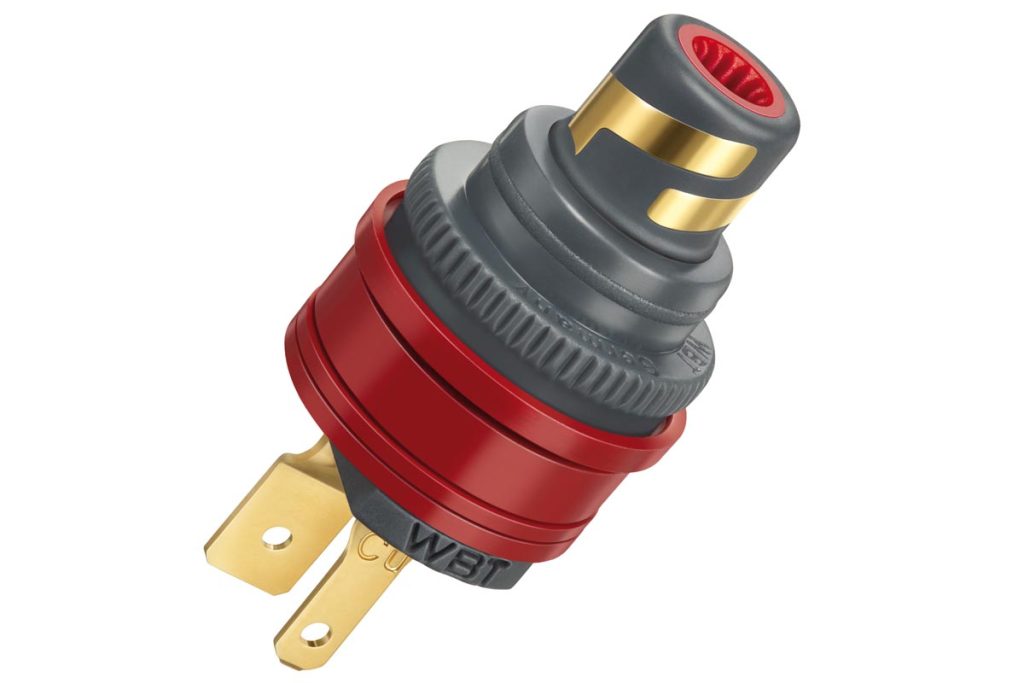 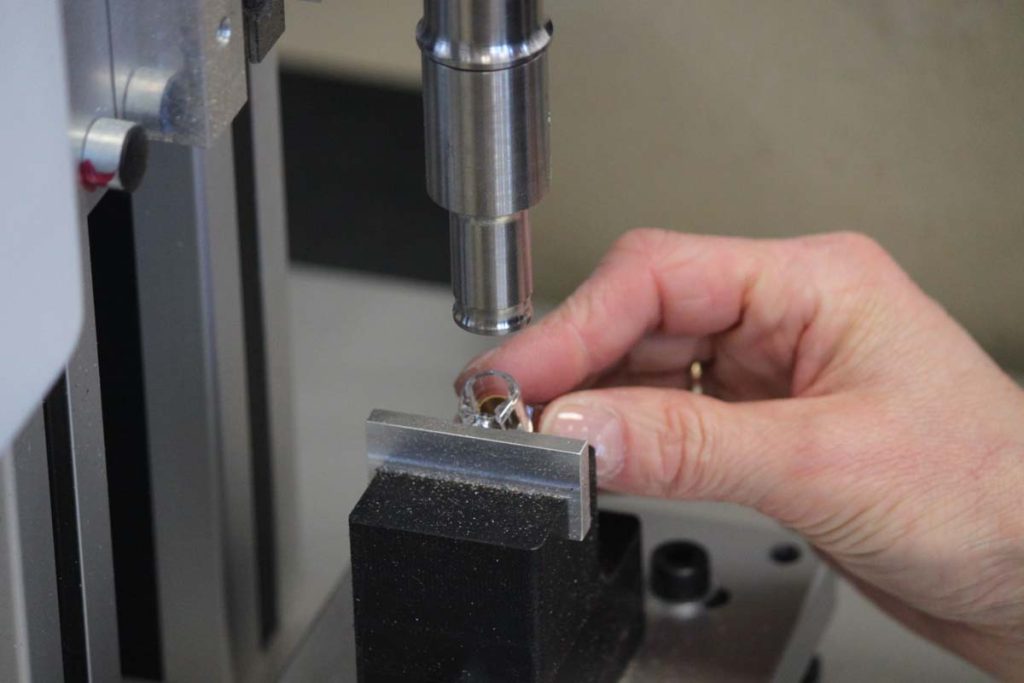 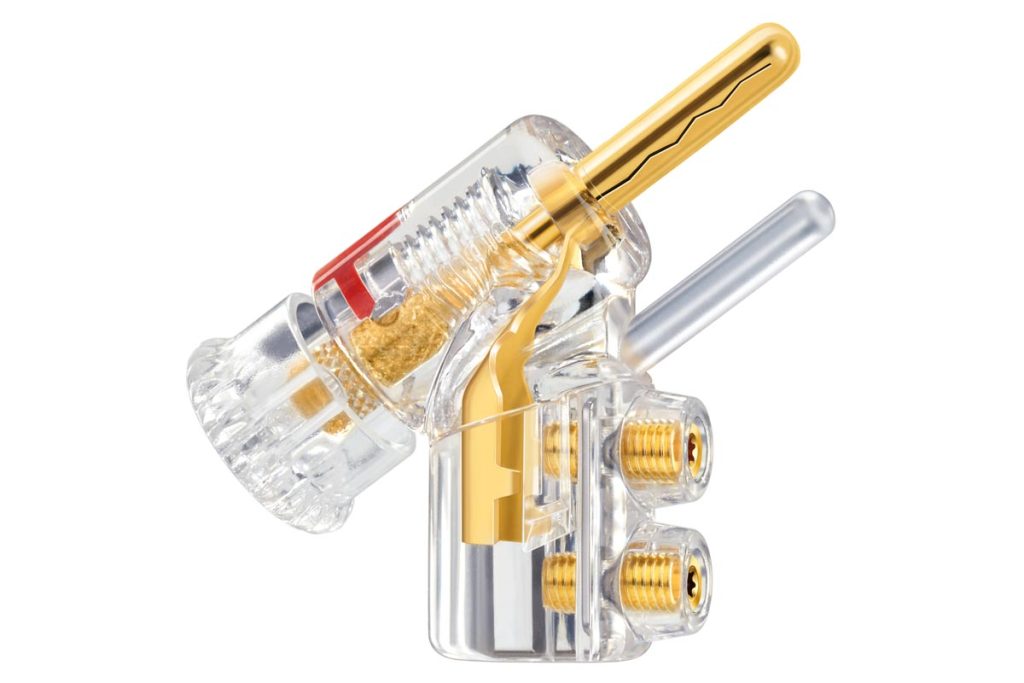 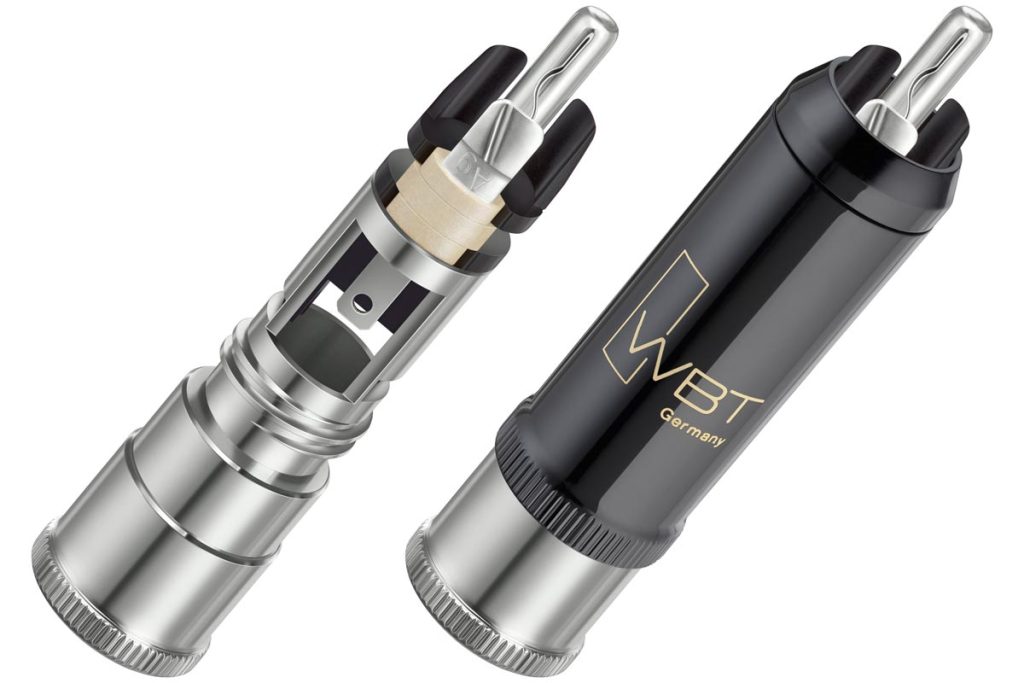 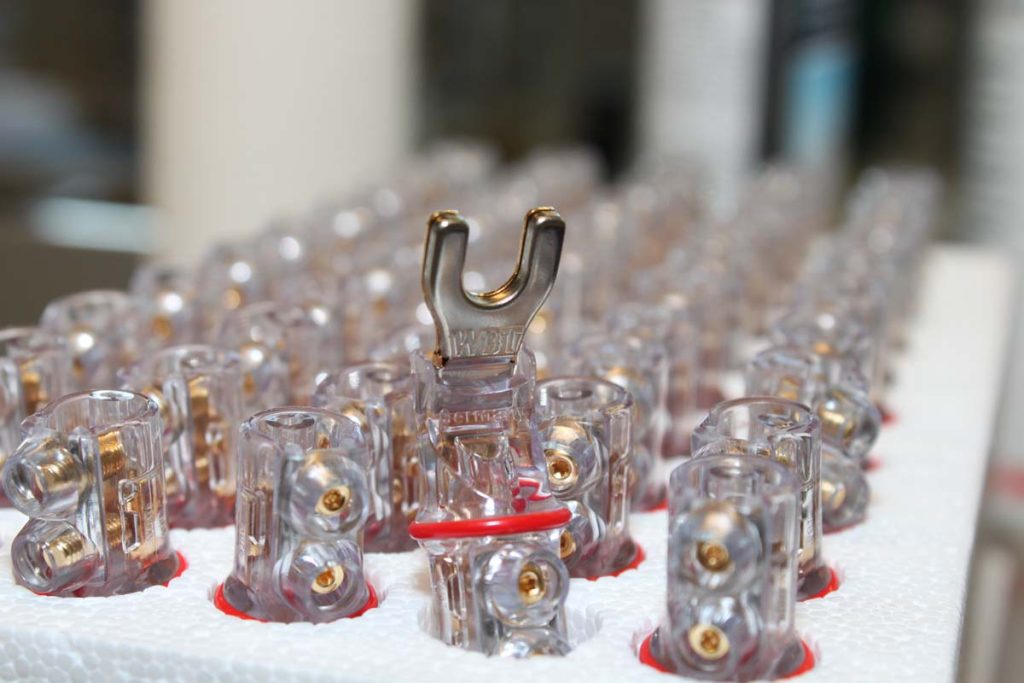 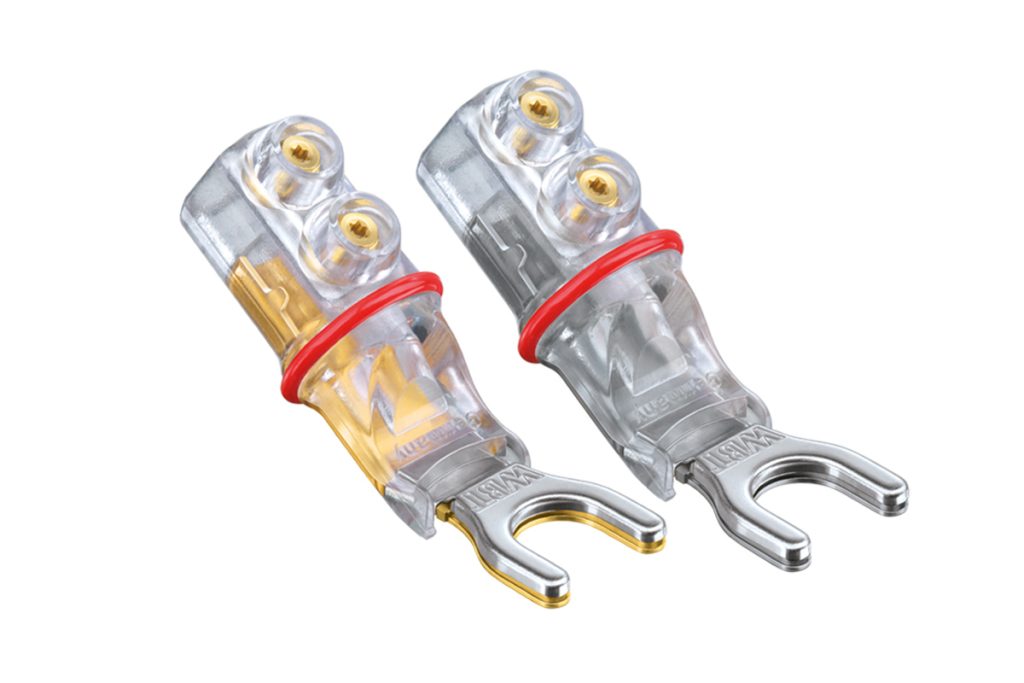 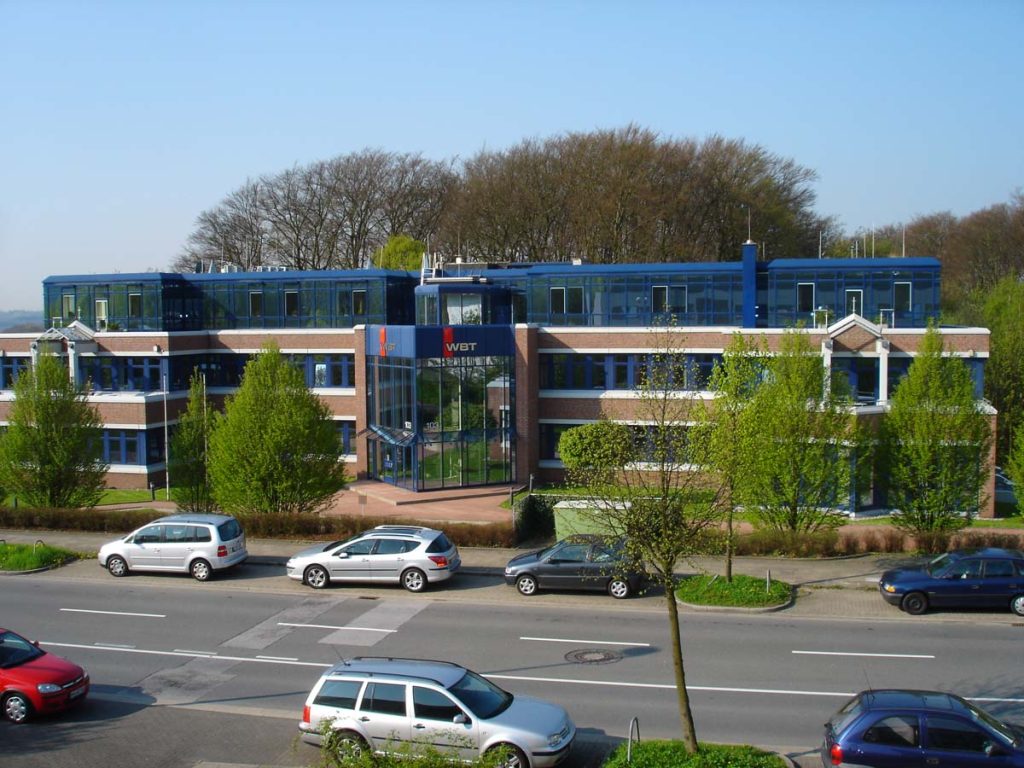 50 percent of WBT product manufacturing is currently performed at the company’s Essen plant. The company, which currently has a headcount of 17, has an assembly facility as well as its own plastics molding shop. Turned components are sourced from the Black Forest region, where this particular form of craftsmanship has a long-established tradition. A subcontractor from Germany also handles production of punched-bent components. In the next few years WBT is planning further enhancements of its nextgen range, which Wolfgang Thörner regards as having plenty of development potential. On that basis, the company wants to develop a surface conductor to minimize micro-vibrations that can have a negative impact on sound quality. The design engineer does not yet want to reveal more details at the present time — but once again the signs are that “less can sometimes be more”.

In his private life Wolfgang B. Thörner is a big fan of Italian opera, but he also appreciates rock and pop music and recently added Adele to his list of favorite singers, alongside Anna Netrebko and Luciano Pavarotti. When this particular product developer decided 32 years ago that he was no longer prepared to have his music enjoyment ruined by the shortcomings of plug connections, he could not have imagined that he would trigger a revolution. While many high-end manufacturers now deliver their equipment fitted with WBT-made jacks and plugs, competing products also feature noticeably higher quality overall than previously. Wolfgang B. Thörner, WBT for short, rightly gets the credit for taking any notice at all of the dark side of stereo systems.

Volume up or down? A very quick interview with Wolfgang B. Thörner, CEO of WBT, where we wanted him to respond as fast as possible.

Volume up or down? – Up.
Analog or digital? – Analog.
Tube or transistor? – Tube (but good transistor amplifiers also work for me).
Vinyl or download? – Vinyl (or a good CD). Prefer a well-made analog medium to a mediocre digital one.
Cross-country run or gym? – Walking.
Trends or tradition? – Tradition.
Tea or coffee? – Usually coffee.
Salad or steak? – Steak.
Wine or beer? – Beer.
Mountains or the sea? – Mountains.
Book or screen? – Book.
Jazz club or opera house? – Opera house.
Bach or Beatles? – Beatles.
Wagner or Wacken? – Wagner.
Stand-by or plug out? – Stand-by.