The Quest preamplifier and Rei monoblocks from WestminsterLab completely reinterpret the class-A concept, generating extraordinary results that dispel any old prejudices listeners might have. 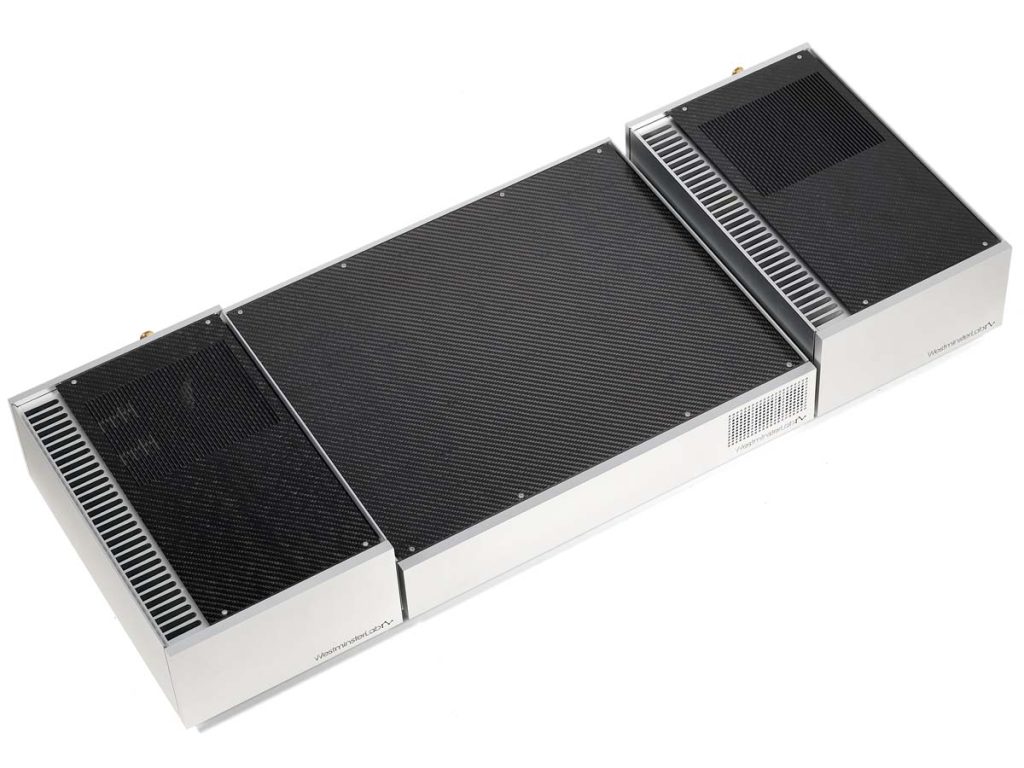 Westminster? For an old vinyl fan like me, this name conjures memories of the legendary American label of the 50s and 60s, r esponsible for numerous outstanding recordings. But there’s no connection at all! WestminsterLab is an innovative, high-end company set up fairly recently. Starting as a cable manufacturer, they partnered with the Chinese digital specialist Lumin to develop the impressive Unum power amp, which was showcased at the Munich HIGH END trade fair in 2016. Playing the central integrative role between WestminsterLab and Lumin is Hong Kong-born Angus Leung, who founded WestminsterLab together with two friends while studying in London. After developing the Unum, and designing the Lumin Amp, Leung embarked on his most challenging project yet – creating a superb pre/power amp combination that would completely reinterpret the class-A concept. This lofty of a goal again harkens back to the legendary Westminster Records label: After all, is there any fan of the stereophonic 60s sound who doesn’t affectionately recall those traditional amplification principles?

Thankfully, Krey Baumgartl of IAD Vertrieb also sent us a set of WestminsterLab cables. Therefore, we could relax about the qualities of the power, speaker and XLR cables we would use. Anyone purchasing this amplifier combo should opt for these cables as well. Ensuring a consistent overall approach is well worth the extra investment. Admittedly, I was a little concerned about how these compact class-A monoblocks, with an output of 100 W at 8 ohms, could drive my Gamut phi7s without contributing to global warming. Fortunately, I’d already been warned that there could be some differences to what might usually be expected. Nevertheless, I was speechless upon hearing the precision, effortlessness and fidelity with which the beats from Yello’s “The Expert” swirled between the speakers and Dieter Meier’s sonorous vocals filled the room. It was just like hearing that old-school class-A sound for the first time – but also somewhat different. So, it’s finally time to look at Angus Leung’s theoretical approach in detail. 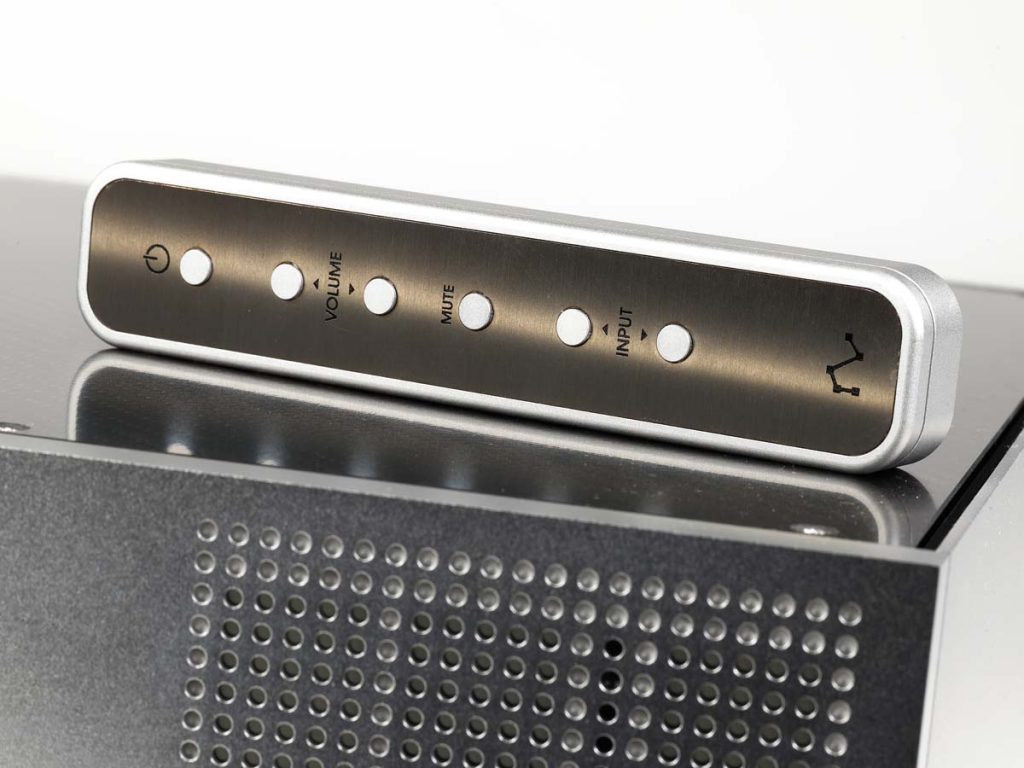 A cool head at all times

When designing a class-A amplifier, the thermal behavior of the heat sink is an essential factor. Traditionally-designed class-A appliances often require only 30 minutes of use to fry an egg on the device’s exterior. However, in the case of the monoblocks, 24 hours of use will only make them warm to the touch. The amp’s idle power consumption is between 60 and 80 watts. WestminsterLab has put a lot of time and effort into developing an effective thermal strategy, thereby obtaining excellent thermal efficiency via a passive cooling design. Finite simulations and flow dynamics were utilized to construct an extremely efficient heat sink resulting in the lowest possible mechanical resonance. Unlike conventional heat sinks, the Rei cooling modules are all manufactured using CNC milling technology, thus ensuring high thermal conductivity through an asymmetrical fin arrangement. Equally astounding is how quickly the amp reaches an optimum performance level after switch-on – a goal actively pursued by its designers. But bias adjustment is the most critical factor in regulating the performance and, above all, the character of a power amp. This also makes it a key factor in the design process. It is widely understood that transistors behave differently at diverse temperatures.

If a transistor with a constant bias is used in an amplifier, there are two possible outcomes: it either takes quite a while to reach its optimum working temperature, or it warms up quickly but soon exceeds its optimum working temperature. To determine the best possible solution, the engineers at WestminsterLab have developed the iBIAS technology. This permits real-time bias adjustment and optimization depending on the amplifier’s load and input signal level. Although the dynamism and reproduction still improve somewhat after 20 minutes of use, it is certainly unnecessary to power up the monoblocks long before you plan to listen to music. Big orchestral music may be an exception to this rule – as exemplified by the beginning of Mahler’s 5th Symphony, played by the Gürzenich Orchestra and conducted by Franoçis-Xavier Roth. After 20 minutes, the brass section and double basses shifted slightly into the foreground, and the tutti chords after the opening fanfare were a heavier blow to the stomach. This greater transparency and nuance in the boisterous passages of the second movement are clearly due to the preamp, boasting a design that is just as innovative as that of the monoblocks. 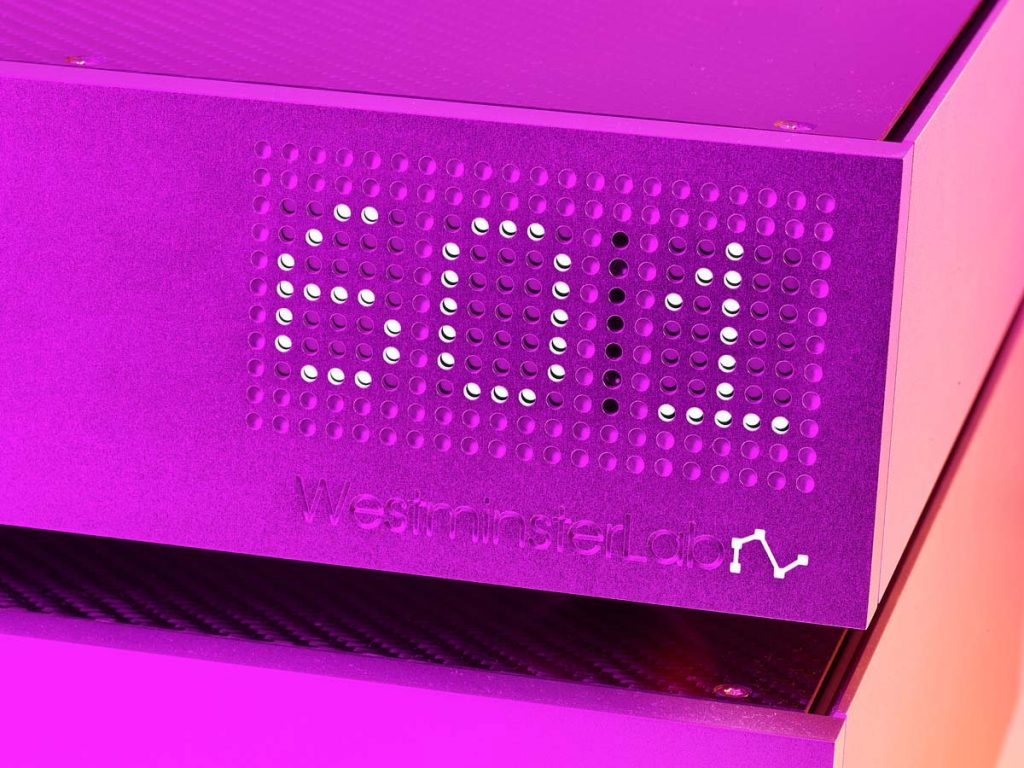 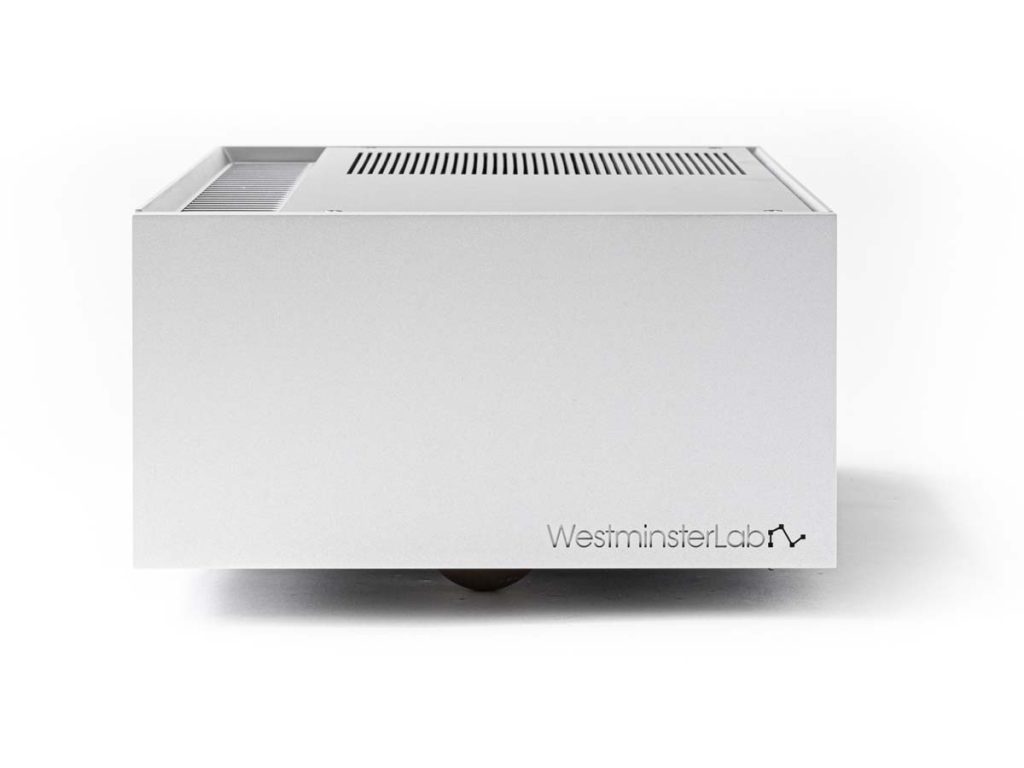 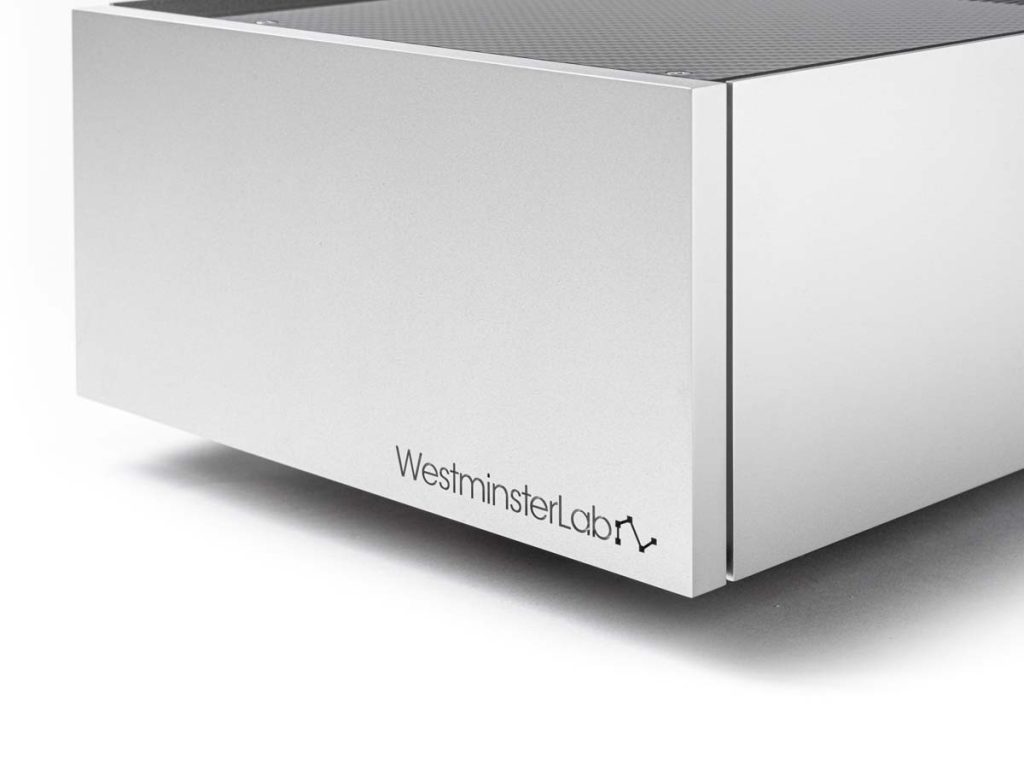 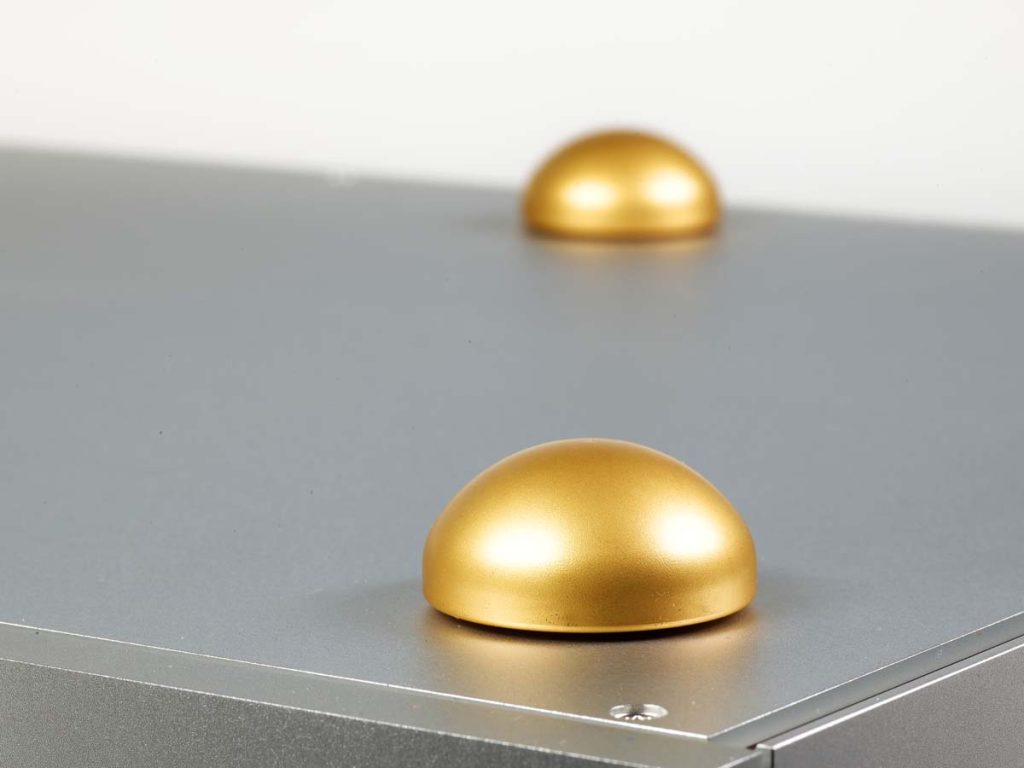 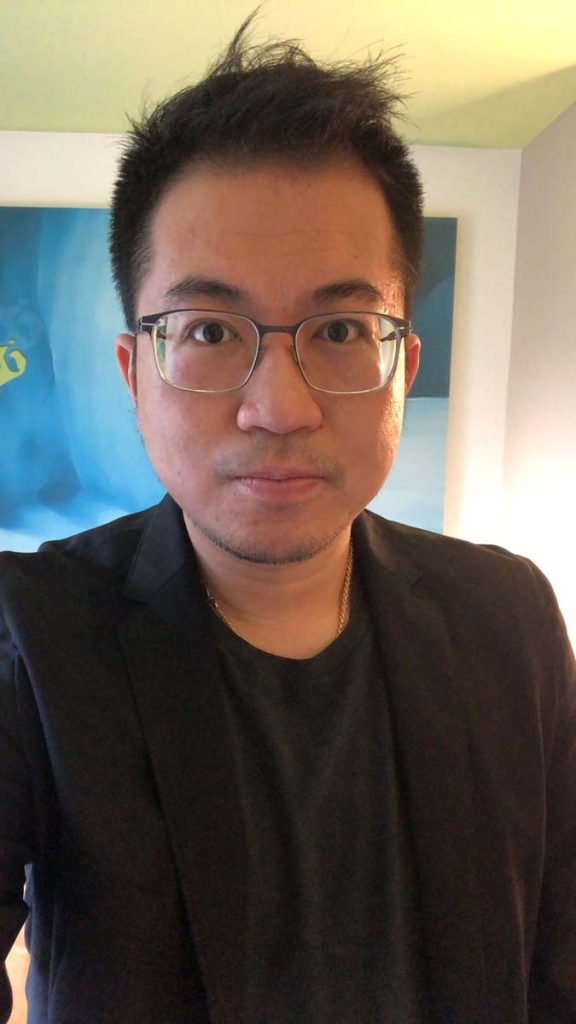 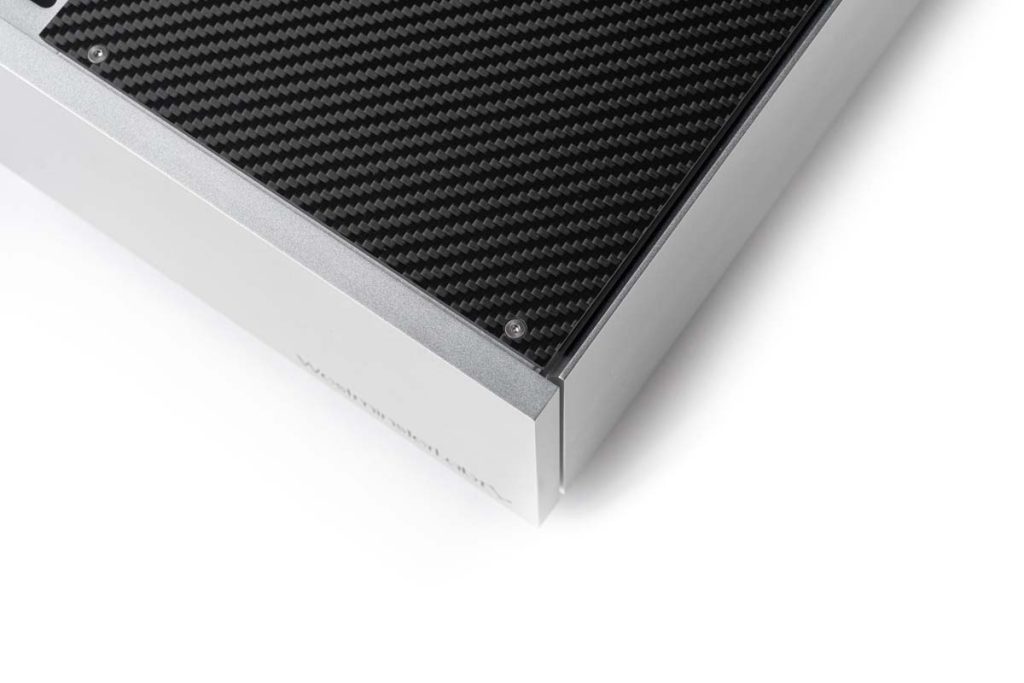 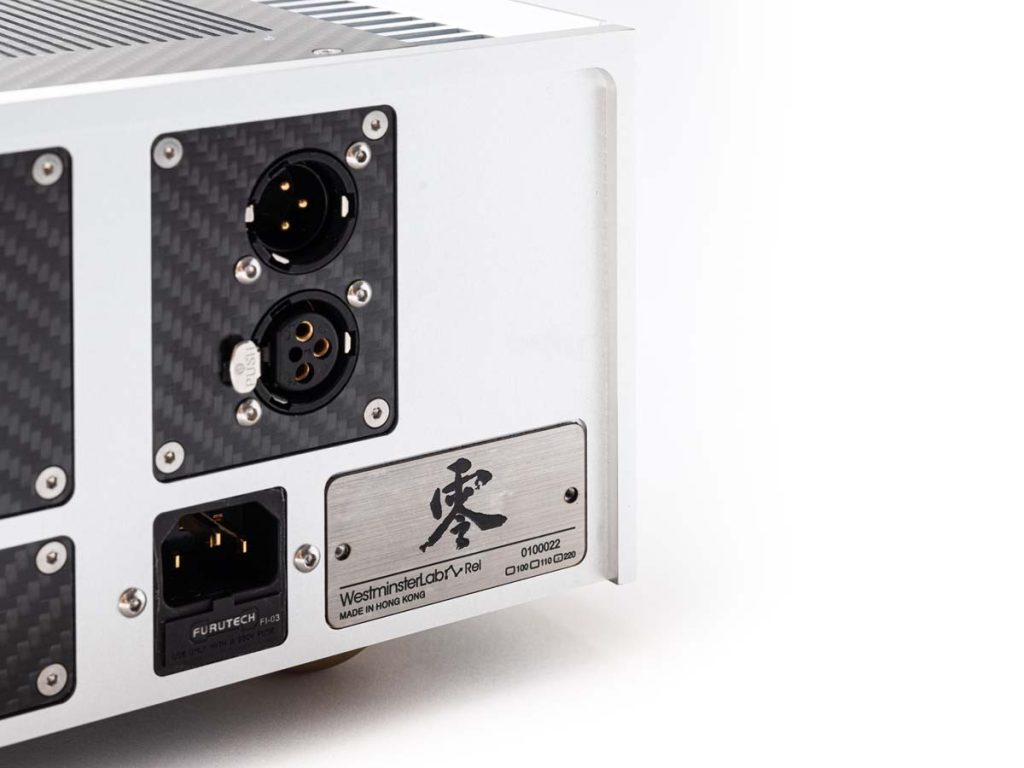 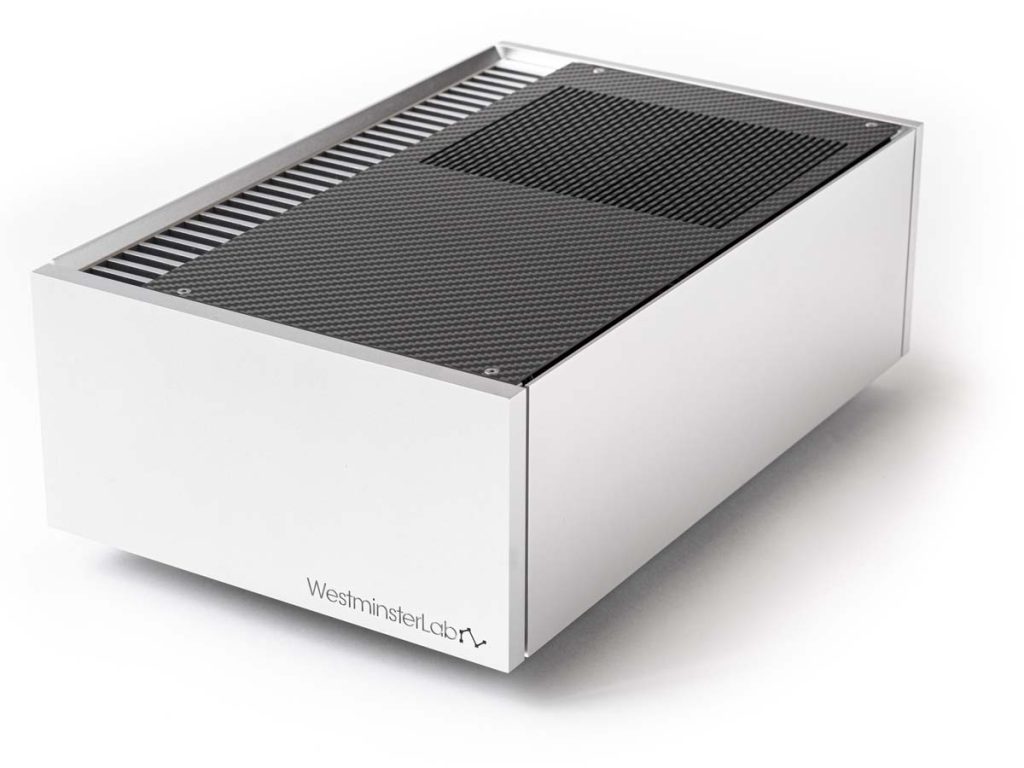 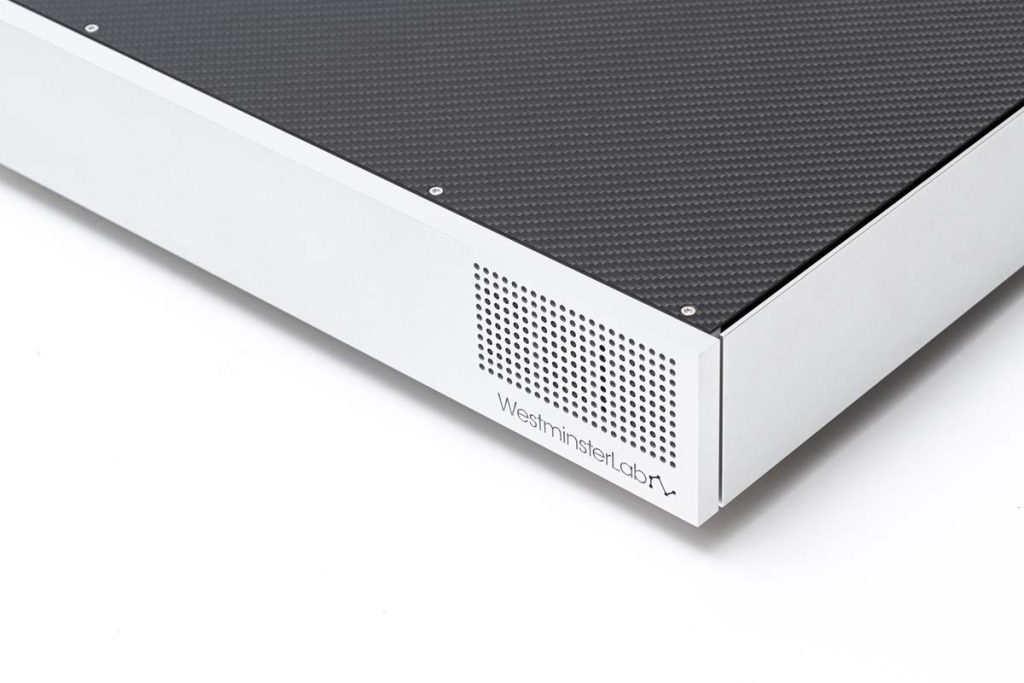 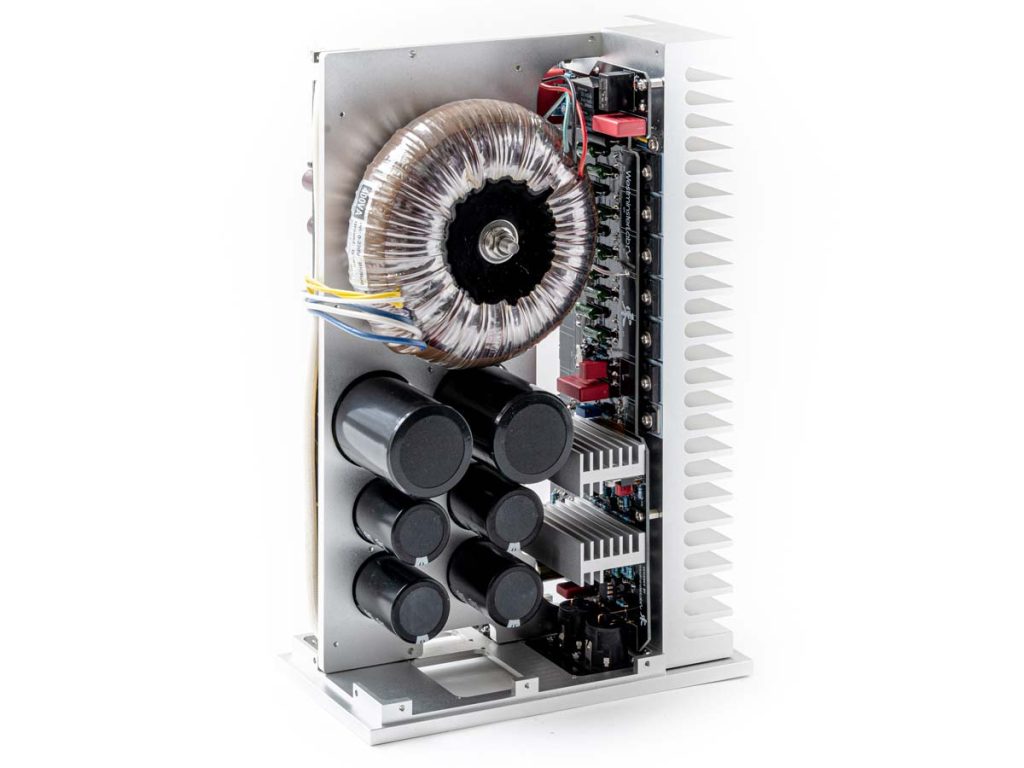 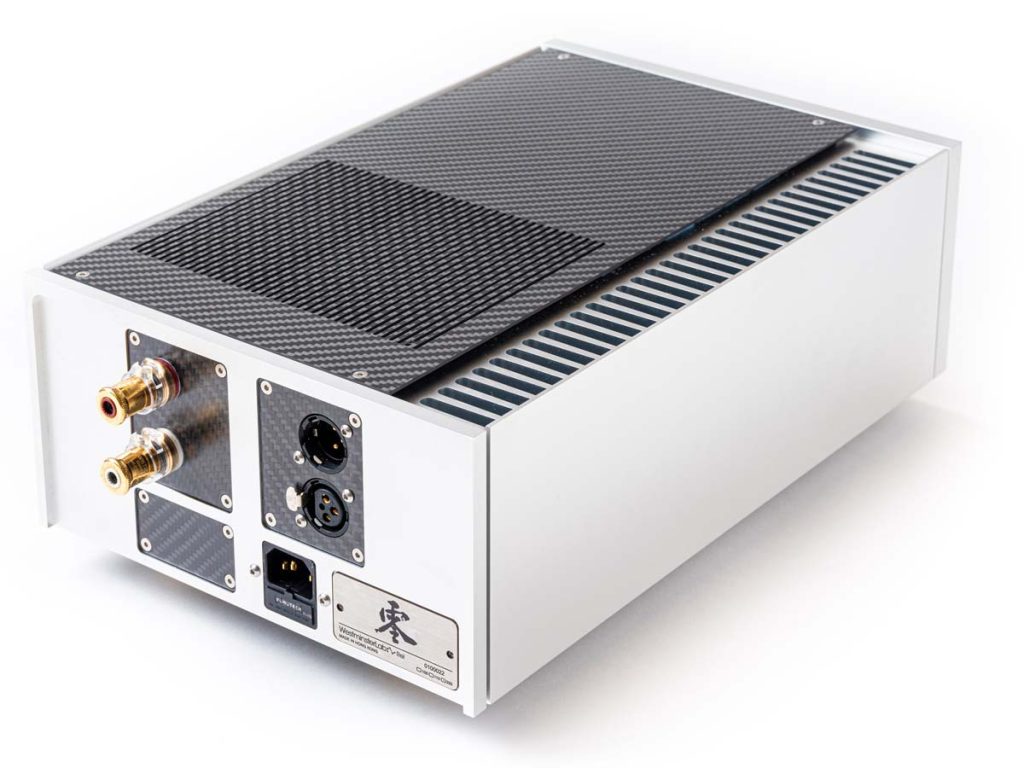 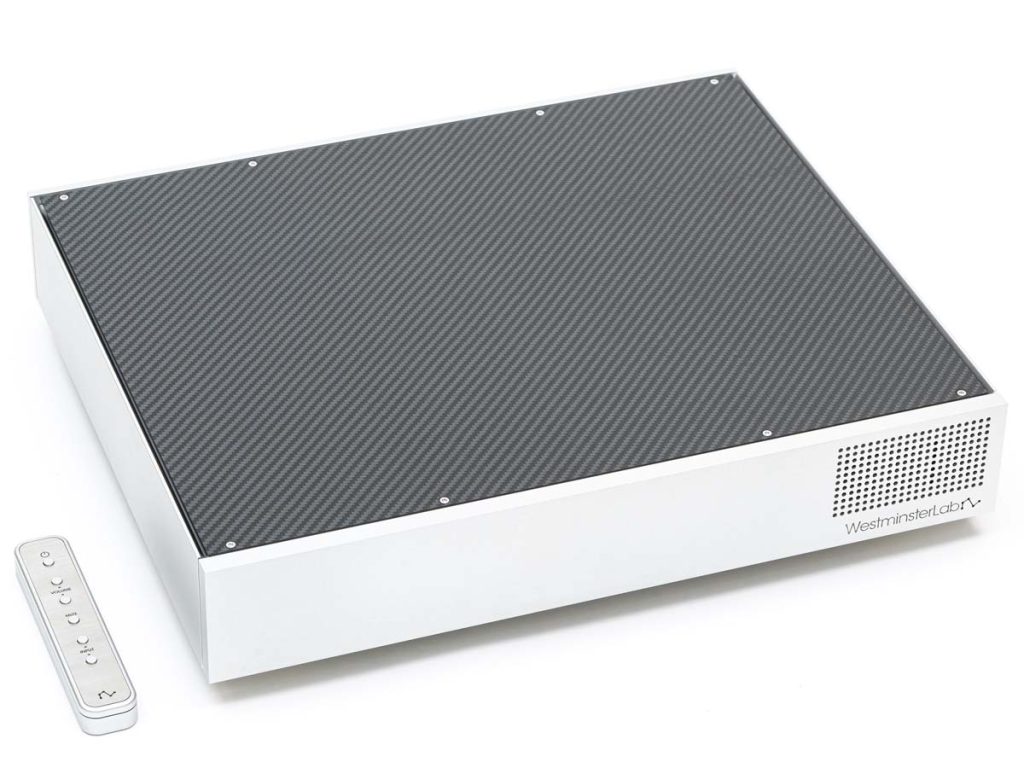 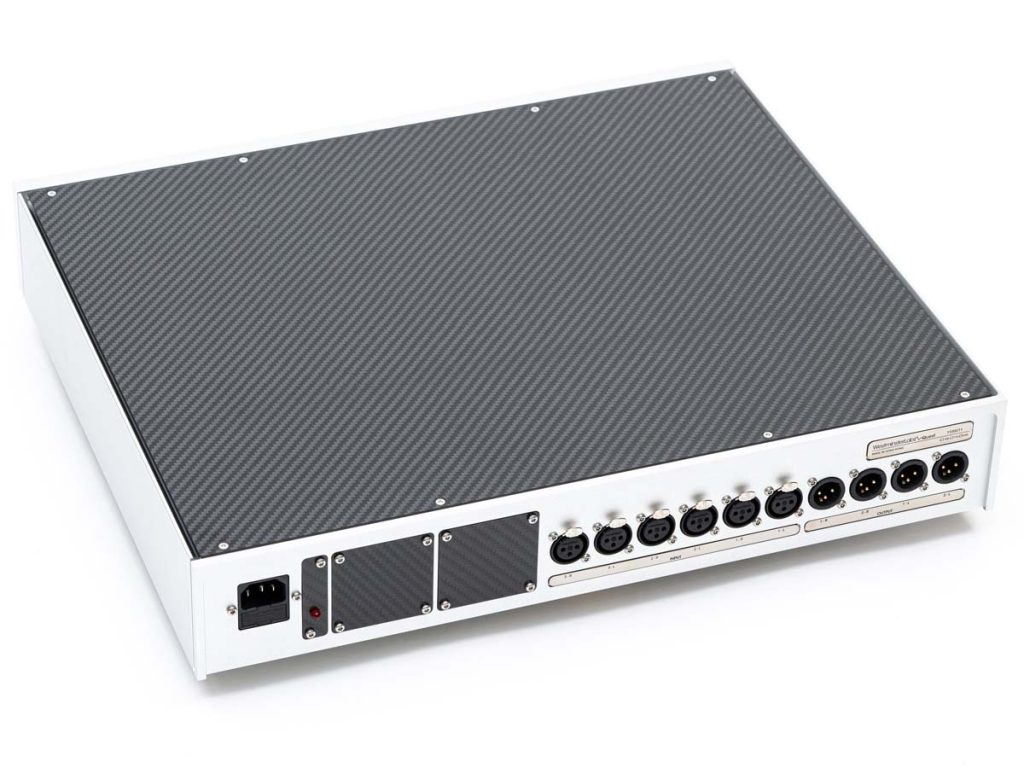 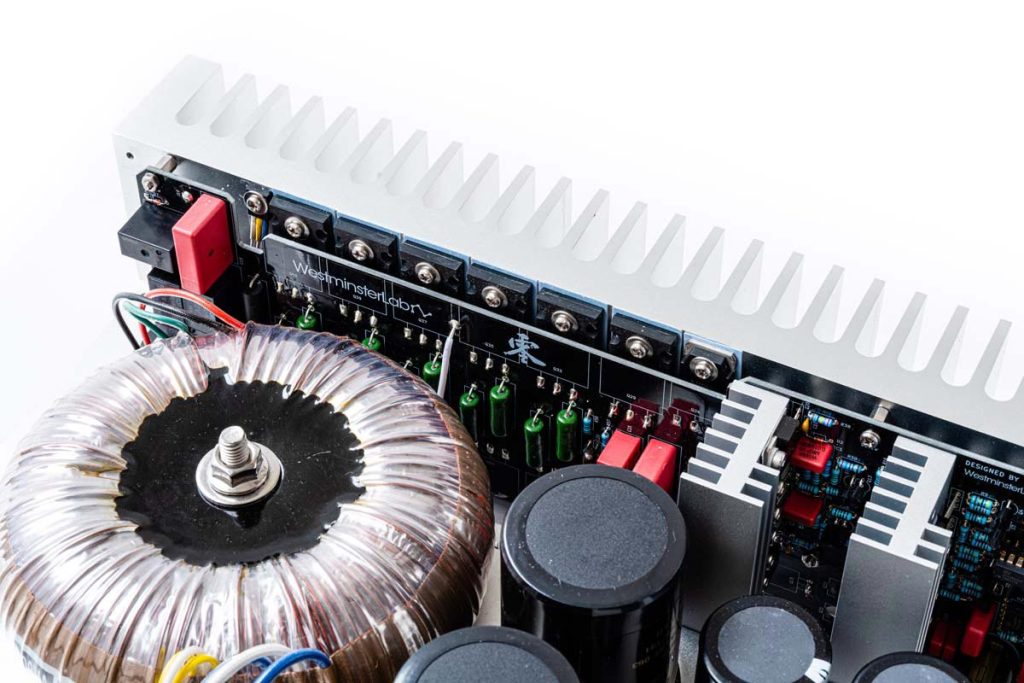 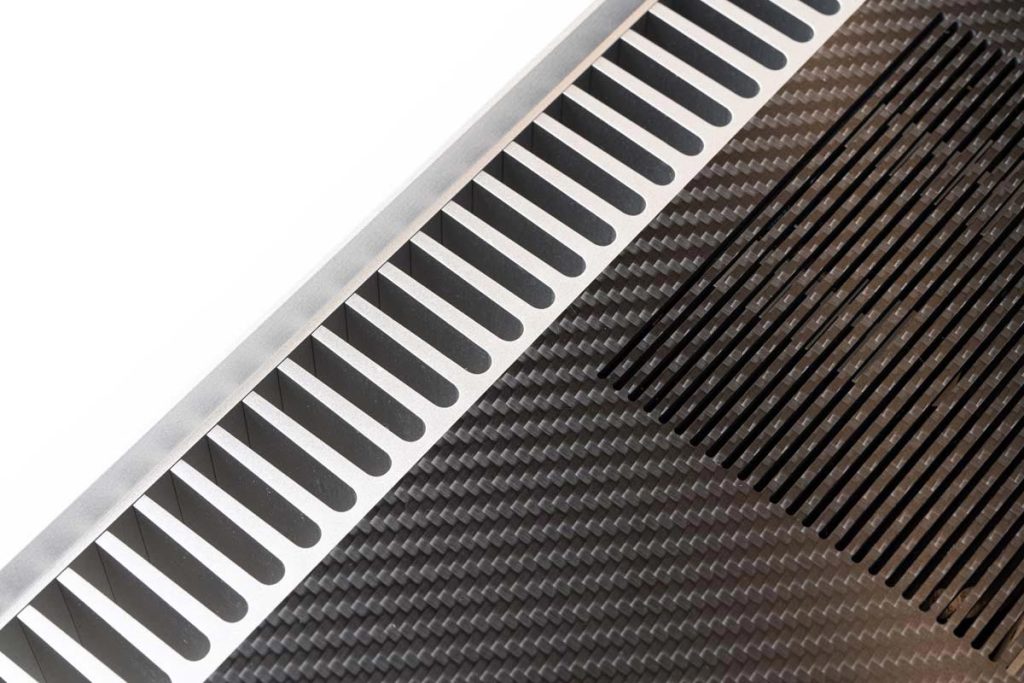 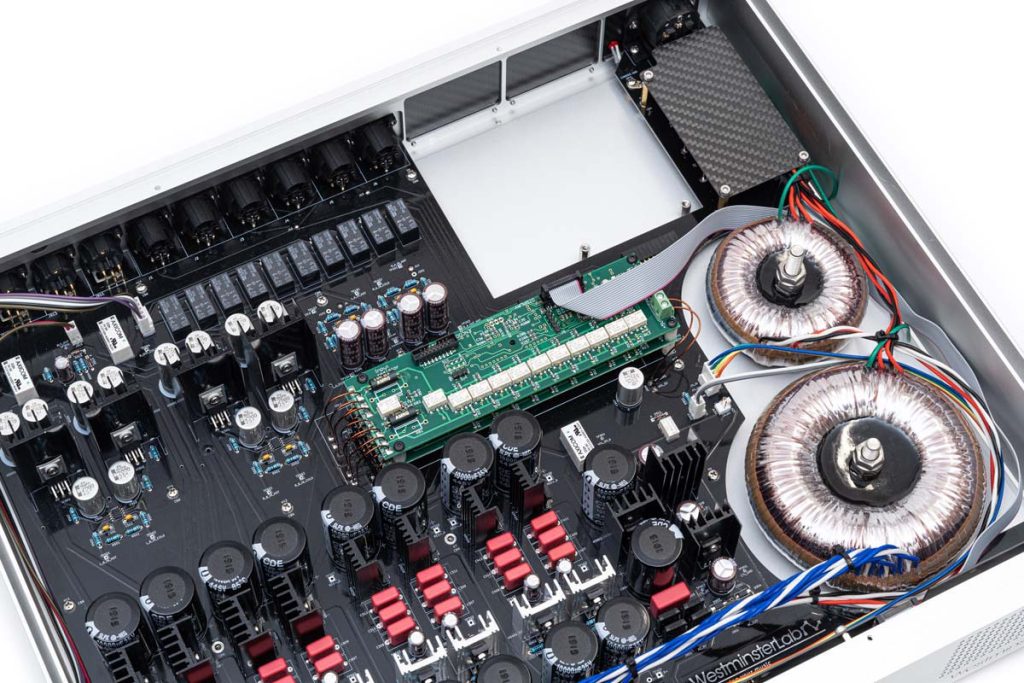 Best of both worlds

Power supply is usually regarded as the most critical element in an outstanding preamplifier. And the Quest power supply is decidedly generous. Ten separate power rails provide the highest possible separation between different channels, and for various components and modules within the unit. The different rails are designed specifically to address the varying needs and conditions in each section of the particular element, as well as ensuring ultra-low noise. In addition to the power supply, the signal paths also have a significant impact on sound characteristics. The engineers have gained crucial flexibility in designing the PCB layout by removing unnecessary components and simplifying the schematic. If possible, the signals run perpendicularly to each other. If this is not feasible, then they run as far away from each other as possible to reduce interference. This extra design effort reaps clearly discernible rewards for the listener. But let’s return to Mahler’s 5th Symphony. The woodwinds reveal just how far the preamp errs incorruptibly on the “clean” side. Oboes and clarinets sounded just as they should, with no trace of euphony. Moreover, the impression of a light and audible warmth setting in stems from how the Quest/Rei combination focuses on the “big picture”, yet it does so without ignoring the details and can excel with an inimitable and nearly swinging flow.

This system let me rediscover a whole range of Jazz recordings from the 1960s, all produced in unpleasant ping-pong stereo. We’re all familiar with this annoying effect, sounding as though the musicians all retreated to the furthest corner of the stereo triangle and were jamming in a seemingly uncoordinated fashion. Listening again, the instruments seem to have significantly greater physicality, and the musicians appear to be standing slightly further from one another. The ping-pong stereo effect has gone, and been replaced by a clearly identifiable semicircle of performers. Delighted by this revelation, I spent an entire evening listing to Jazz recordings that had long been banished to the “forbidden section” of my collection. I would like to make special mention of the duets between bass clarinet and double bass on Eric Dolphy’s Musical Prophet. Normally, both instruments seem to have been strangely transported to the left-hand side of the stereo stage. Furthermore, when the amplifier can’t create three-dimensionality and, above all, physicality, we feel that the clarinet and bass are intertwined with each other. This is definitively not the case with the Quest/Rei combo. Even though the sound emerges exclusively from left of center, the musicians are clearly separate from one another, both horizontally and vertically. Only a few bars in and I had completely forgotten the inadequacies of the 1963 recording. The physicality of the instrumental reproduction is absolutely compelling.

Before returning these superb amplifiers to their rightful owners, I composed an internal summary of my findings. This was clearly the most expensive amplifier combo I had ever welcomed into my listening room. Yet the ambitious price tag was, without a doubt, reflected in the exceptional sound quality — but without exhibiting any showy or spectacular effects. The musicians weren’t being turned into circus acrobats. Rather, the musical coherence is precisely what made it so fascinating. With every beat, no matter what musical genre, I got the urge to say: that’s exactly how it should be! Class-A is undoubtedly alive and kicking!

FIDELITY: Mr. Leung, why have you built another class-A amplifier at this point in time? What do you believe are its sound benefits as compared to class AB or today’s class D?

Angus Leung: Technically speaking, class A has fewer distortions when compared to class AB and, as far as class D, a far more linear performance at varying loads (the low-pass filter is class D’s Achilles heel). From a subjective viewpoint, we believe that class A enriches the music with greater granular detail and animation. Above all, it better transports the atmosphere of a piece of music. It’s hard to explain, but it actually feels as though the music is in the room with you.

FIDELITY: But isn’t it also true that class A is more difficult to work with?

Angus Leung: That’s completely correct. A is better than AB theoretically speaking, but for a long time many practical obstacles prevented optimum implementation of the class-A concept, at least to the high standard that we have set ourselves. It took us many years of intensive R&D to finally generate our own bias design. We have constructed a pure class-A amplifier that doesn’t sound like a typical example of its type.

FIDELITY: The amplifiers are initially designed for purely balanced operation. Can you explain the advantages of this? Although unbalanced connections can be added as upgrades, will that give me the desired sound quality?

Angus Leung: We have always believed that balanced technology brings a better CMMR. This obviously equates to a lot more work and adjustment to ensure that both phases are doing their job, but it’s the transmission type that we have faith in – and our listening tests seem to confirm our view. The input sections of both the Rei and Quest have been specifically designed for balanced inputs. You could retrofit unbalanced inputs, but with a seriously detrimental effect on performance. We advise owners to purchase the optional RCA input card for the Quest to convert the signal, and to use balanced connections from the Quest onward.

FIDELITY: Your devices have a refreshingly minimalistic look. No bling-bling or unfortunate design experiments.

Angus Leung: Our philosophy has always been “less is more”, and we apply this to every aspect of our work: circuit design, industrial design, product design and even packaging. We scrutinize every detail from numerous perspectives, deliberating on which approach to use and considering which unnecessary elements or distractions we can remove to enhance the experience. In industrial design, this has led to the removal of disruptive and unjustifiable design features. In product design, this has caused the elimination of all manual controls on the front panel of the amplifier. And that may be an unconventional decision, but would any user manually adjust a dial when a remote control is provided? As far as the packaging is concerned, we’ve reduced the quantity of materials used, leading to a smaller overall CO2 footprint for the product itself as well as the materials required for the recycling process. You could say we take a “Zen” approach from top to bottom, putting a lot of thought into how a product looks, feels and sounds.

Fidelity: Regarding your “reduce to the max” philosophy, you also included the circuit design. Can you give us a little more detail about this?

Angus Leung: Of course. For the development of electronic circuits, it means that “unessential” components and features are removed to avoid needless distortions and noise. To improve stability, many companies employ numerous filters to develop circuits with an enormous bandwidth – 3 MHz, for example. Taking a different approach, we have developed a circuit that remains stable at a bandwidth we regard as adequate for music reproduction. This has let us reduce the number of filters, and consequently the total number of components. Fewer components means fewer distortions! We aim to ensure that the WestminsterLab experience is as pure and refined as possible.

FIDELITY: Mr. Leung, thank you for speaking to us.