Professional musician Stefan Gawlick travels the world and knows almost every major concert hall around the globe. In this series, he reports on the acoustics and other characteristics of famous venues — both in the auditorium and on stage. Up now: The Cologne Philharmonic Great Concerto Hall. 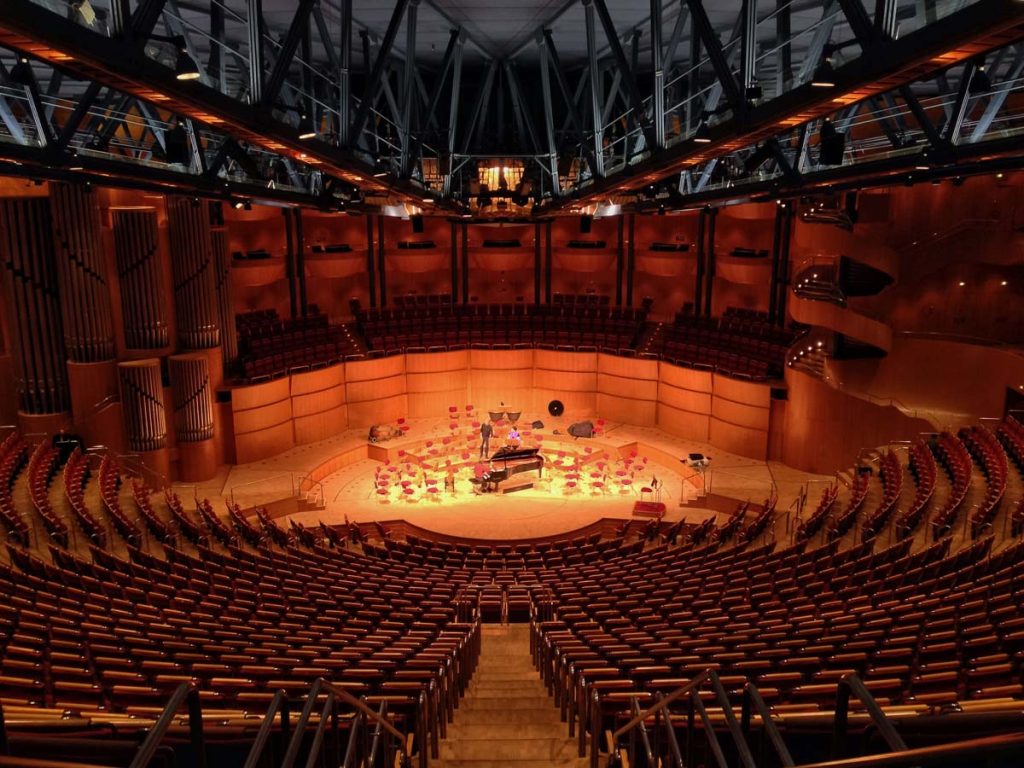 The Cologne Philharmonic is 31 years old and still appears young and fresh. Not all concert halls can do that, and it certainly has something to do with the exciting concert calendar that program head Annette Wolde has managed for many years. This is precisely what makes the Cologne Philharmonic a favorite hall among artists who travel internationally. But one thing at a time.

For musicians, the quality of a hall comprises the sum of many components, just one of which is acoustics. It starts with the journey to the concert hall, which is often long and tedious. In Cologne, you just have to walk a short distance from the train station across the cathedral plaza and you’re there already. Access to the airport is also easy. The issue of the hotel often turns out to be dicey, but in Cologne it’s solved all quite pleasantly: Just across from the artist entrance is a very good hotel, and it also offers a top-rate breakfast at any time of the day (important on an early travel day).

Once at the Philharmonic, performers can enjoy a spacious dressing room, plenty of lockers, and a very agreeable backstage area. With the impressive number of restaurants around the Philharmonic, it’s easy to overlook the facility’s cafeteria and its microwave meals.

Now we come to the hall itself, the heart of the matter. The stage feels magnificent: bright, free of shadows, and bathed in cool light. With abundant space, a uniquely configured podium, wide doors, and, not least, one of the nicest and most helpful stage teams of any hall in the world: Musicians will feel well accommodated here.

One has to be familiar with the acoustics to work with them, since they aren’t too generous. Small ensembles seated behind a certain point on the stage (now marked) produce an anorexic sound, and, past the 10th row, come across as will-o’-the-wisps. In the last row before the back wall, which absorbs a great deal of the bass energy, you have to put quite a bit of muscle into playing your instrument to keep it from sounding too flat out among the audience. By listening to the sound coming back to the stage from the hall, you get nice feedback from the hall that helps musicians modify their playing. Taking all this into consideration, you can, in fact, play anything well in the hall. And you need to, because Cologne still doesn’t have a chamber music hall.

After leaving the stage following the concert, performers experience a distinctive Cologne perk that has made this hall famous among musicians from all over the world: Right on the other side of the stage door, backstage personnel await performers with trays holding glasses of Kölsch beer. Other halls (like in Dortmund) have started to copy the practice, but the special charm of this gesture is only found here.

The exciting program planning mentioned above ensures that artists from around the world stream in and out, which, in turn, is a great plus for musicians. At any time, it’s possible to meet a former fellow student or an old music friend you’ve lost touch with because your work takes you to different cities in the world. Where else can you find orchestras from London, Munich, Chicago, and Vienna converging in one place on just one weekend?

The hall hosts a 400 concerts a year nonstop, meaning there is hardly time for “proper” productions. But WDR radio does record quite a bit here with its Symphony Orchestra Cologne (previously Cologne Radio Symphony Orchestra, KRSO), so a glimpse into its online archive is worthwhile: