The new Dan D’Agostino Relentless Preamplifier has been designed to represent the ultimate in preamplifier design. 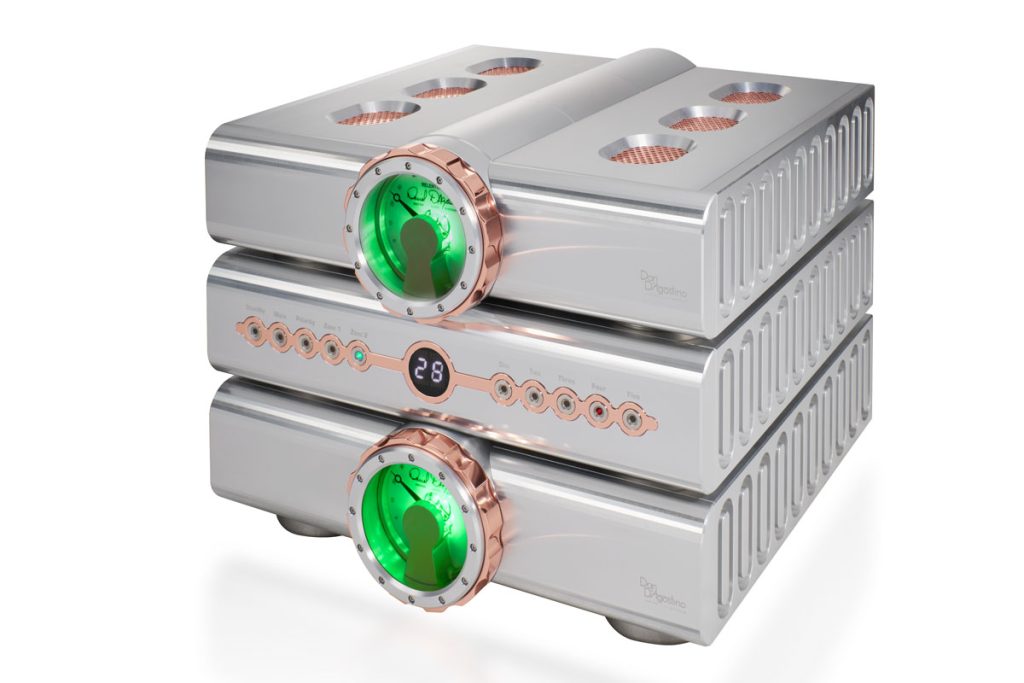 The preamplifier plays a critical role in musical playback; the point in the reproduction stage when the music signal is particularly susceptible to compromise through noise and distortion. The use of three separate chassis in the design of the Relentless Preamplifier—a dedicated audio chassis for each channel separated by a power supply/control section—addresses these challenges and brings other benefits as well.

Positioned between the two audio channels, the power supply makes use of extensive electrical and magnetic shielding. Thus, it keeps radiated interference effectively out of critical preamplifier circuits. Internal line conditioning circuitry filters RF noise on the AC power. In addition, it compensates for asymmetric power waveforms and DC on the mains. Power for the preamplifier stages comes from two 150 VA toroidal transformers – one dedicated to the analog circuitry and one for the digital and control circuitry. These transformers drive an 8-amp bridge rectifier and 26,400 microfarads of filter capacitance. The two regulators for the analog stages are scaled-down versions of those used in the Relentless Mono amplifier. The separate digital regulator is a monolithic platform with thermal and current limiting protection in the unlikely event of a fault. The Relentless Preamplifier has nearly as much power supply capability as many power amplifiers. 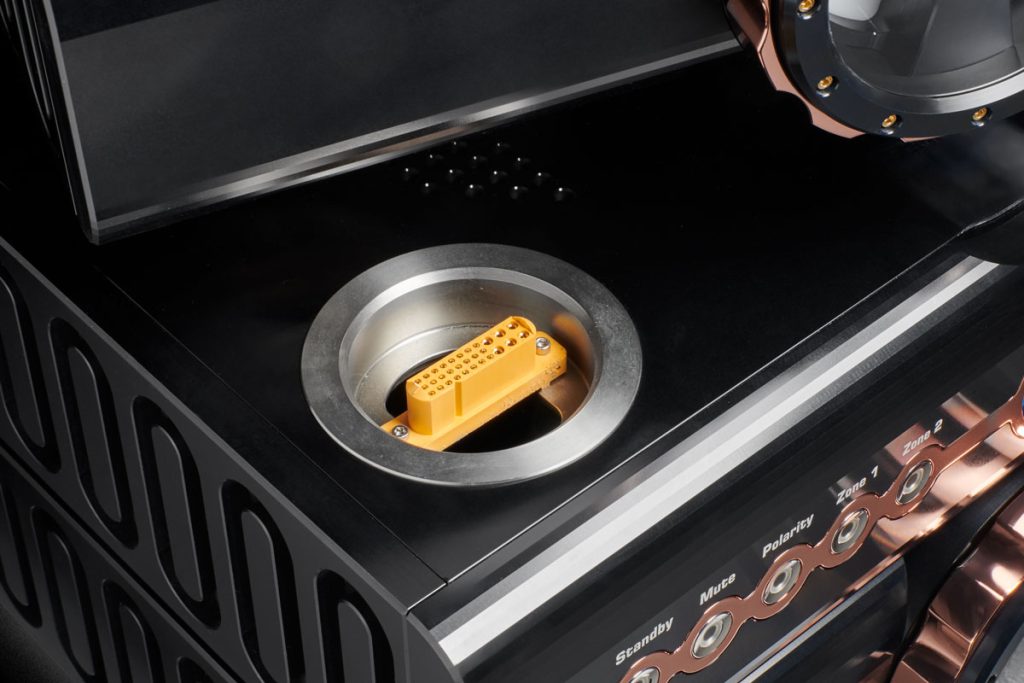 The input stage in each mono preamplifier is the result of a design experiment for a circuit that hadn’t seen use in any previous D’Agostino preamplifier. As part of development, the engineers at Dan D’Agostino tested a version in the existing Momentum Preamplifier. The launch of the Momentum HD Preamplifier was a direct consequence of the overwhelmingly positive results. From there, the team set out to develop the fullest expression of this idea, and the Relentless Preamplifier was underway. 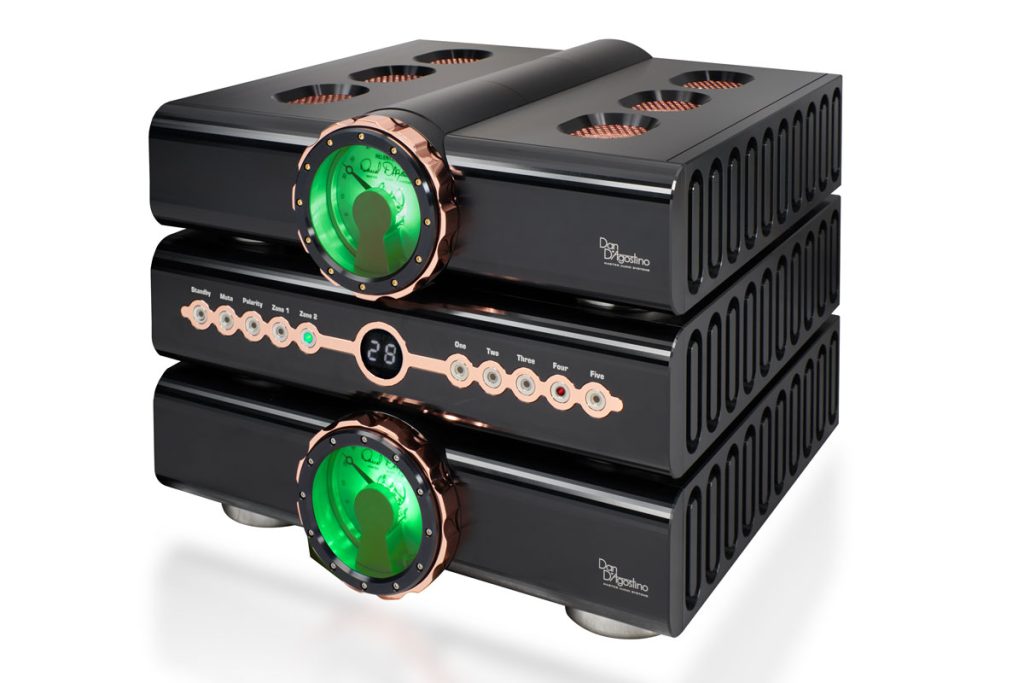 Featuring only balanced XLR inputs the Relentless Preamplifier topology rejects common-mode input noise over an unusually wide bandwidth. All signal gain is realized in the current domain using proprietary multiple-output current mirrors with nearly 30 times the linearity of other designs. Executed with four-layer circuit boards for superior signal quality. The use of four-layer boards dramatically reduces distortion and propagation levels as compared to the more commonplace, two layer boards.

The analog and digital circuit elements are isolated, including ground planes, from each other. Where necessary, digital control signals are optically coupled to analog circuits. The signal switching relays are hermetically sealed and use gold-plated contacts for maximum signal integrity. 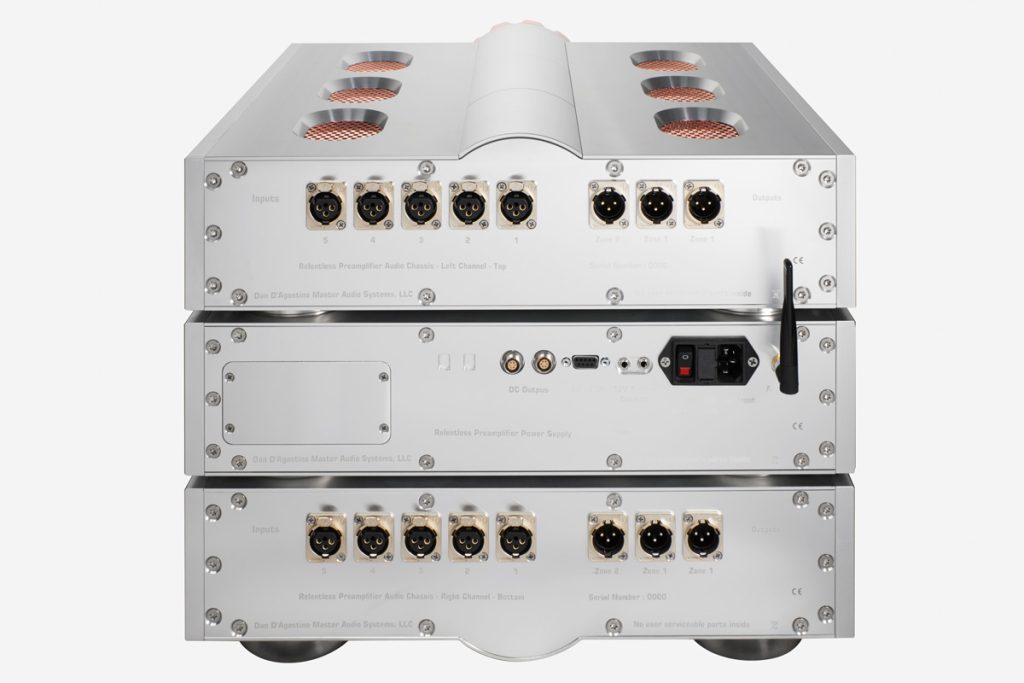 Utilizing no negative feedback anywhere, core D’Agostino circuit concepts include a signal path that is fully complementary and balanced from input to output achieving a frequency response flat to 120 kHz.. The overall result is a musically dense and dynamically rich signal presented to the balanced outputs.

Arguably, the most striking element of the Dan D’Agostino Relentless Preamplifier is the pair of volume controls fronting the two audio chassis. Volume control circuits are often overlooked, if not actively minimized, in preamplifier designs. This is not the case in the Relentless Preamplifier. Each volume control is constructed using 14 separate metal components ensuring the smoothest response and control of the military-grade, high-linearity solid-state switches and discrete precision resistors employed in the volume circuit. The bandwidth and transient response of the Relentless Preamplifier is completely unaffected by the volume setting. As a result, high frequencies sound especially smooth and extended, and music emerges from “jet black” silence. 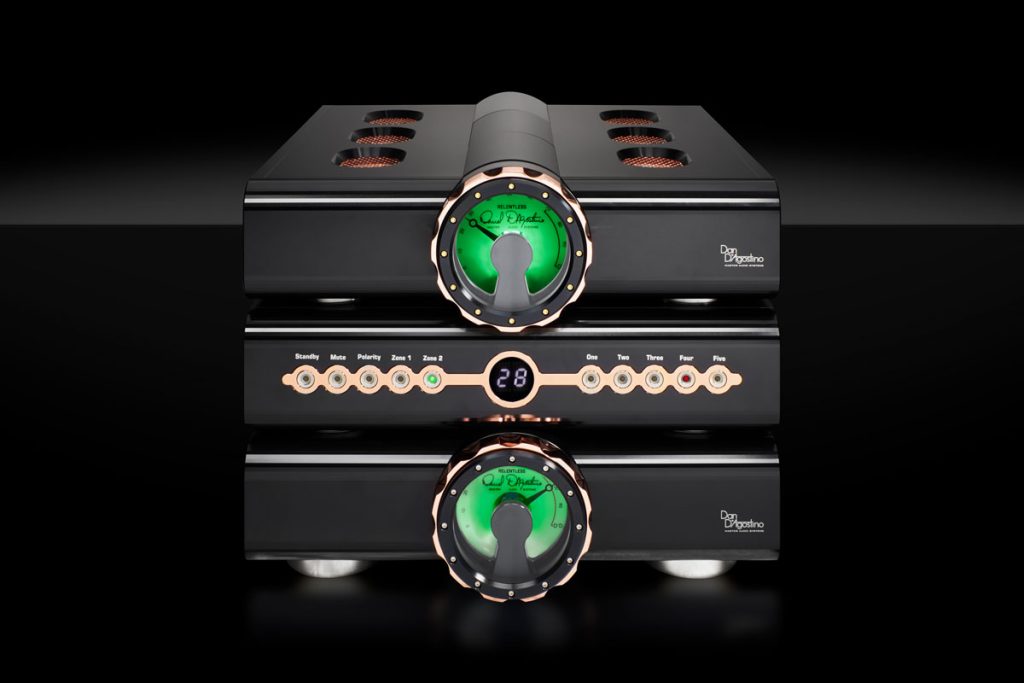 The volume settings are displayed via the elegant swiss watch inspired volume wands or can be displayed numerically, from 0 to 99.

Two Preamplifiers in One

The Relentless Preamplifier is a two source/two zone preamplifier. This means that the Relentless Preamplifier can simultaneously control the switching and volume of two sources in two separate rooms or zones. Listening sources may be two analog sources or when equipped with the optional digital streaming module, one digital source and one analog source. In a one zone system, either volume control will adjust volume in the main room or Zone 1. If two zone operation is desired, the upper volume control manages the Zone 1 volume and the lower volume control adjusts the Zone 2 volume.

Preamplifier status in your hand 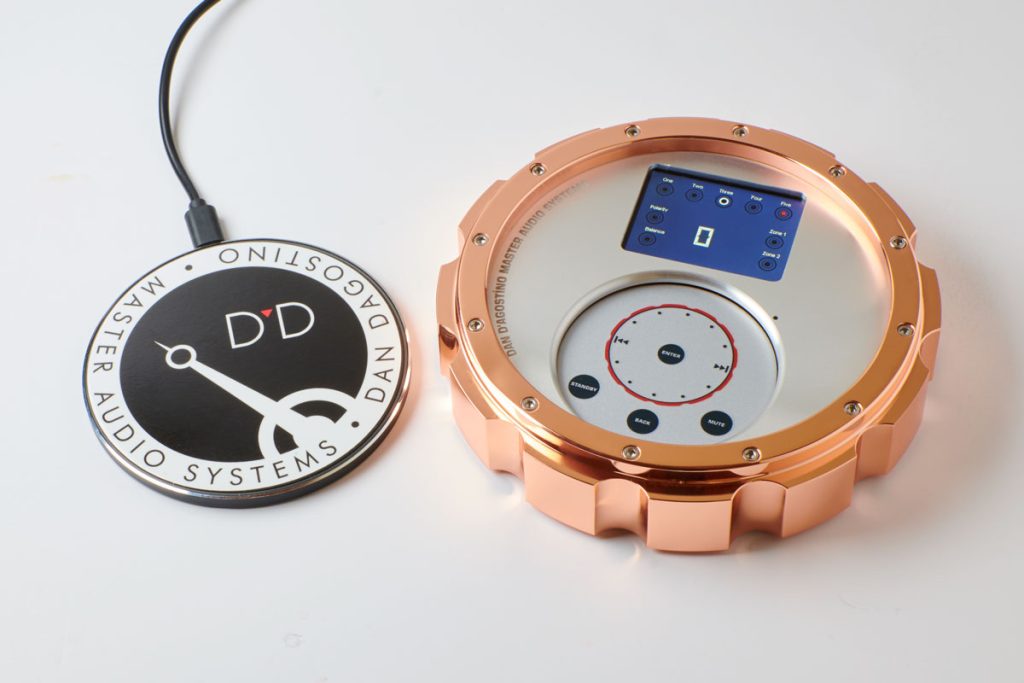 The Relentless Preamplifier’s primary focus is centered around ultimate stereo playback but it fits nicely in a home theater system. Input Three can be configured for Theater Bypass. In this mode, the Relentless Preamplifier’s volume control is bypassed and volume control for the main loudspeakers is now controlled by the connected surround-sound processor. RS-232 and 12 Volt triggers facilitate integration into advanced home control systems. Additional DC power outputs for future products as well as two programming ports offers easy growth and performance options in the future. 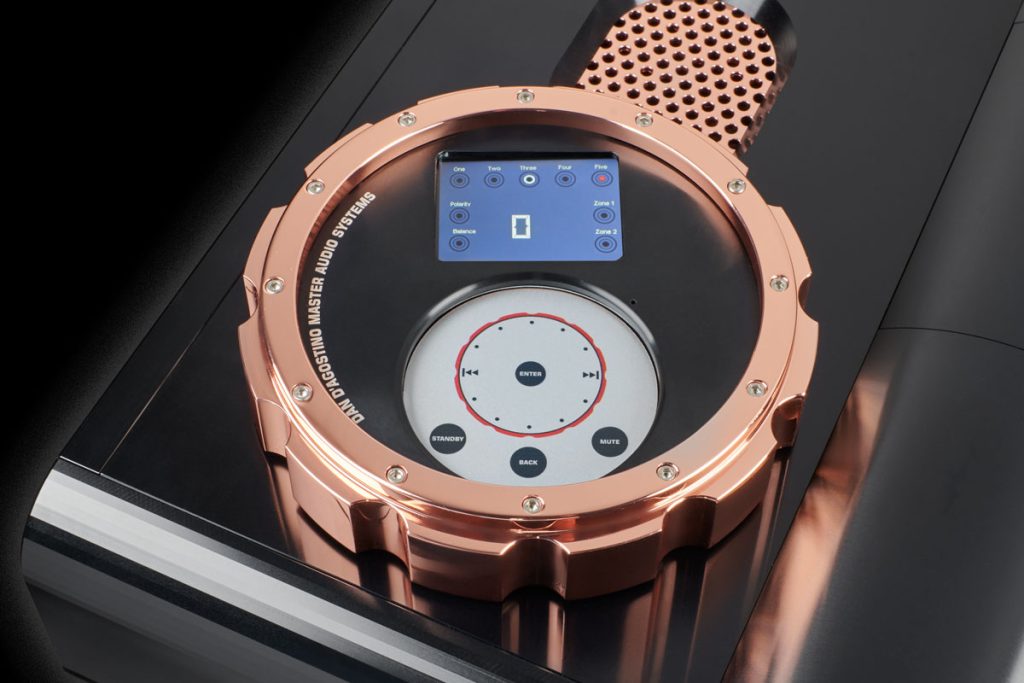 Completely isolated from the analog circuitry, the DSM is housed in the power supply/control chassis. Requiring three separate circuit boards the core element is a pair of DACs configured in differential mode with each one configured to handle the positive and negative signals for each channel. Capable of handling today’s highest resolution sources, PCM signals up to 32 bit/384 KHz and DSD signals up to DSD256 (11.2MHz) are decoded natively. Often overlooked or downplayed, the analog section of a DAC significantly impacts the final sonic performance of digital music. Internal balanced connections carry the final analog signal to the connecting feet and onward to each audio chassis. From here, the analog music signal takes advantage of the entire power and analog circuitry within the three chassis of the Relentless Preamplifier.

Coupling innovative circuitry, distinctive materials, and artisan manufacturing excellence in a sophisticated architecture, the Relentless Preamplifier is the perfect centerpiece for the ultimate music system.