A Boa Constrictor That Can Really Fly

This is a loudspeaker cable with a license to thrill: the in-akustik Referenz LS-4004 Air Pure Silver is as thick as your forearm and a real statement piece that’s very hard to beat in terms of appearance, workmanship, and, of course, sound quality. The serpent destined to entice high-end users who enjoy lingering in the garden of good listening. 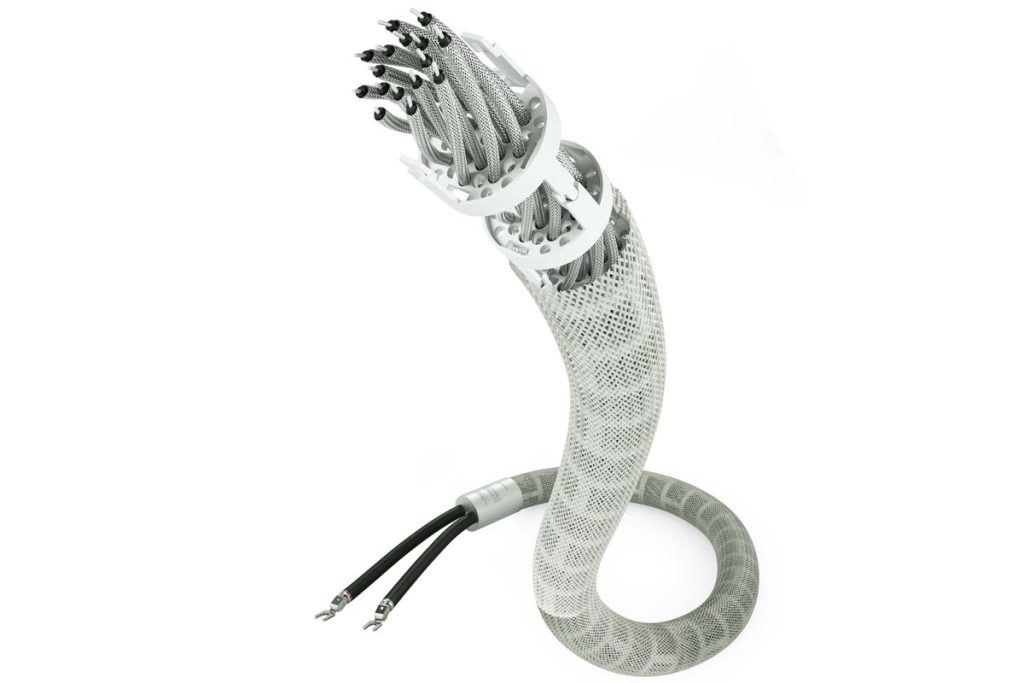 “Wait a second. Someone’s made a mistake. I didn’t order anything from the pet store. And definitely not a boa constrictor. And since when have these creatures ever been white?” I asked myself.

The box was huge but surprisingly light. Actually, there’s no way the insured express-delivery package I’d received could’ve contained one of those constrictor-type snakes, even if the contents curled up in the huge cardboard box looked just like a serpent at first glance. I wasn’t hearing any hissing and the rustling was almost null. More on that later though. Lying there in my listening room was no exotic zoo animal requiring a special license to keep, but rather one of the best loudspeaker cables money can buy. An exceedingly clever accessory designed to eliminate all types of distortion and interference that could impair top-notch sound quality.

Its model name actually reveals its greatest asset: “Air” refers to in-akustik’s Air Helix technology, which has been appearing in the company’s top line of loudspeaker cables for some time now. The in-akustik Referenz LS-4004 Air Pure Silver is the latest model to push to the top in every sense. Put simply, this design uses air to act as an insulator, but because construction is so complex, expensive manual processes are used to make the cable, which is produced in correspondingly small numbers. According to in-akustik, each side of the Referenz LS-4004 Air Pure Silver features 24 high-purity silver wires that all receive a razor-thin lacquer coating to ensure the wires are insulated from one another before then being braided around a PE core. The developers at in-akustik (see also accompanying interview) claim this effectively prevents the formation of stray eddy currents, resulting in a greater sense of “composure” in the conductor. A clip developed specifically for the new cable keeps the conductors helically free in the air and guides them through the cable at a defined distance. The process also includes the conductors being threaded by hand into the Cross Link Super Speed waveguide to ensure the quality levels achieved by the meticulously assembled cable can be sustained. The design does not, by the way, respond the least bit well to pressure exerted by a human foot stepping on it. LS-4004 owners should therefore be sure to exercise great care with the white cable housing, even if it doesn’t look all that fragile. They’re ultimately only made from silver and PE.

There is some flexibility when it comes to the connectors though. You can choose from spade lugs or banana adapters, both rhodium-coated to minimize resistance, especially at amplifier and loudspeaker terminals. The FIDELITY test unit had both versions plus an Allen wrench so I could create a setup that was right for me in a matter of minutes. Once I got all that done, I had to be a little patient: You see, although the in-akustik Referenz LS-4004 Air Pure Silver did sound promising straight out of the box, it didn’t reach its full high-end potential until it had been broken in and warmed up for two or three days. Admittedly, one significant feature was distinguishable right away, even without the warm-up period: Because it was developed with minimum inductance in mind, the LS-4004 immediately achieved impressive three-dimensionality. Due to the two-layer arrangement of the double-layer multicore, the magnetic fields around the individual conductors overlap and neutralize each other, thus considerably reducing the inductance of the cable. The “aha moment” reminded me of my own cable experiments back in the old hi-fi days when I used to construct computer-ribbon cables following painstaking processes on the basis of a rather obscure tip I got from a DIY forum. Conductors 1 + 3 + 5 + 7 + 9 and so on for plus and 2 + 4 + 6 + 8 and so on for minus. This meant for every flow of electrons in one direction there would be an equivalent that would move within close proximity but electrically separately in the opposite direction. The reward for the orgy of soldering was, at the time, a loudspeaker cable that easily outperformed the majority of significantly more expensive cables. The total cross-section was anything but huge, yet my “PC cable” had considerably more pressure in the bass and more resplendence in the treble than almost everything available to buy in the stores back then. 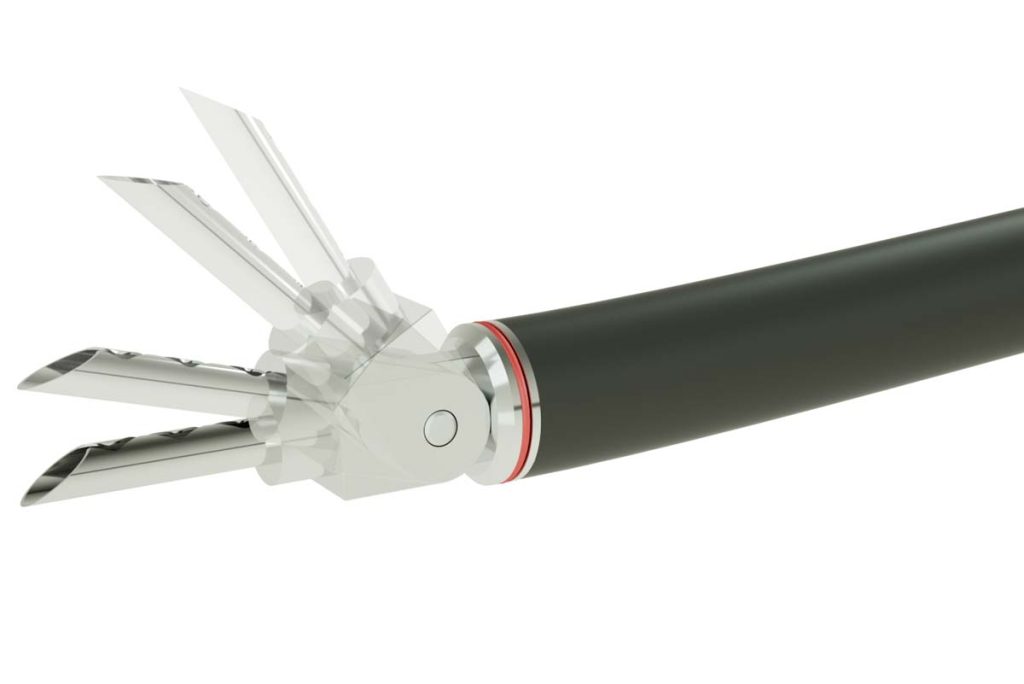 That feeling I had almost thirty years ago that I was listening to a truly special component was back again. The in-akustik Referenz LS-4004 Air Pure Silver loudspeaker cable certainly doesn’t radically alter a system’s sound (that would actually be rather counterproductive), but it does makes things a little more accurate and demonstrates more consistency at crucial points than your average cable does.

I can’t remember how many CDs, SACDs, and LPs I fed into my Mark Levinson 390s, my Audio Note Zero, my Marantz S14 V1, and my Clearaudio Innovation in the tight testing time frame I had. It must have been a few hundred. I kept noticing details I’d never picked up on before. The Referenz LS-4004 Air Pure Silver also had a very positive effect on the tonal balance, on the scope and contour of the bass range, and on the detailing of the treble. 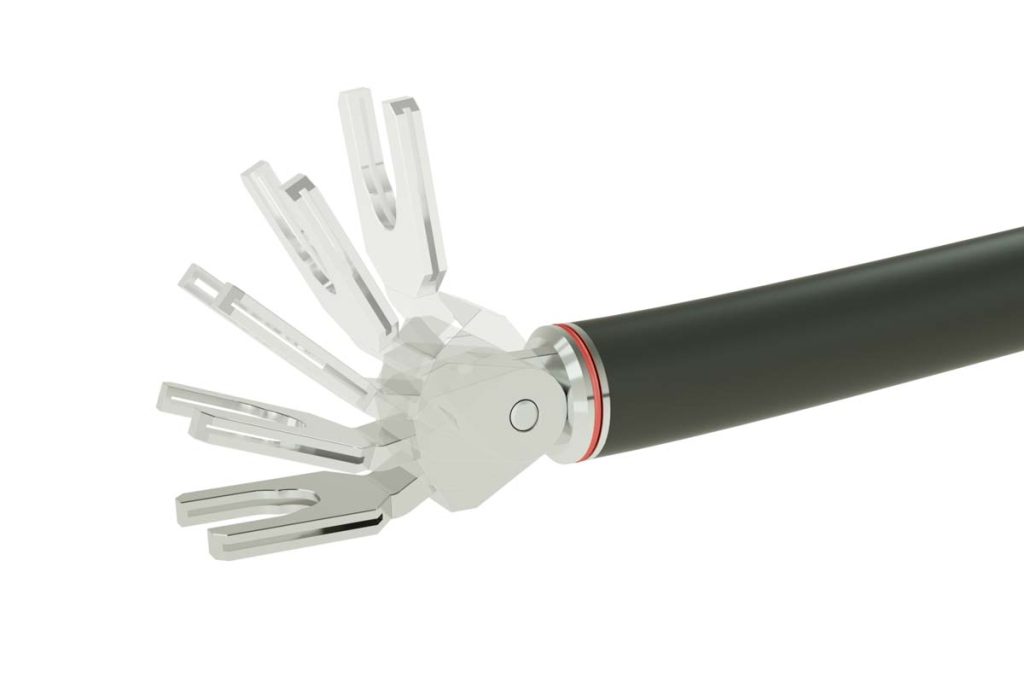 When you listen to music at home for a long time on exactly the same system, you learn to live with its weaknesses and to tolerate the fact that it can’t do everything the (often infinitely more expensive) heavy­weights in the FIDELITY listening room can master. I’ve always felt like my Infinity Kappa 7.2 Series II loudspeakers could handle anything I threw at them but that they didn’t operate on a particularly spatial level. The Referenz LS-4004 Air Pure Silver showed me that even Arnie Nudell’s old speaker design can create virtual concert venues with both breadth and depth. Teodor Currentzis and his exemplary recording of Gustav Mahler’s Symphony No. 6 (see also “Classidelity” in issue 43 of the FIDELITY print magazine) not only flooded the room with that truly great euphonic sound only a top orchestra could understand how to create, but I also got an exceptionally vivid, three-dimensional impression of how the spacious studio must have been set up in Moscow’s Dom Zvukozapisi (House of Audio Recording) where Currentzis mobilized the Russian MusicAeterna orchestra to deliver incredible performances. The fact I could pick out every single instrument in the immensely dense turmoil and didn’t have to strain my ears was definitely down to in-akustik’s Referenz cable to an extent. 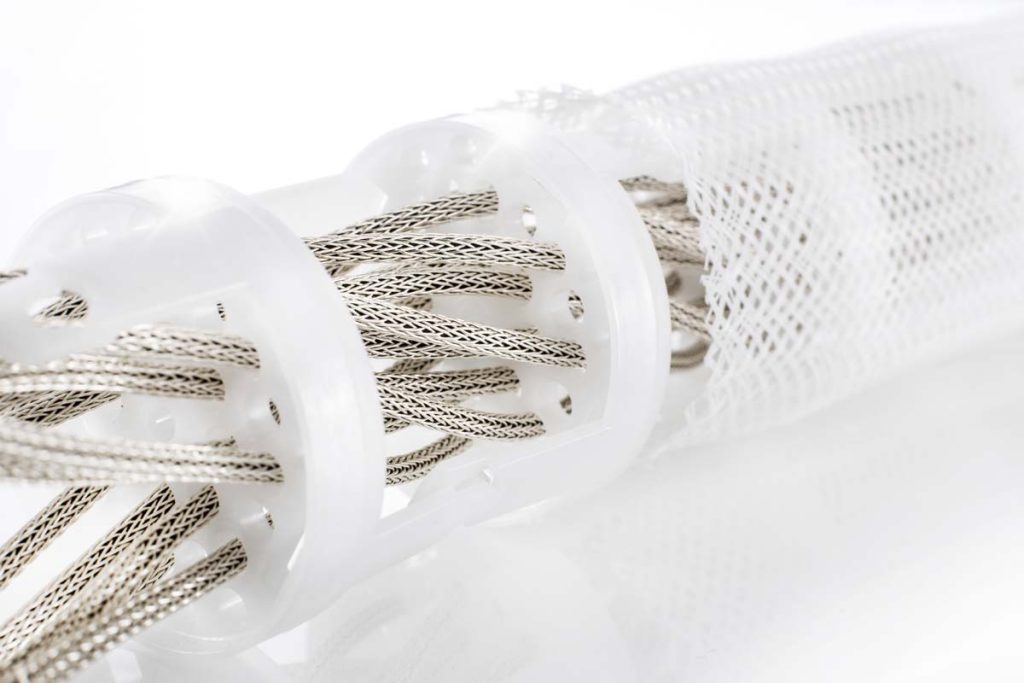 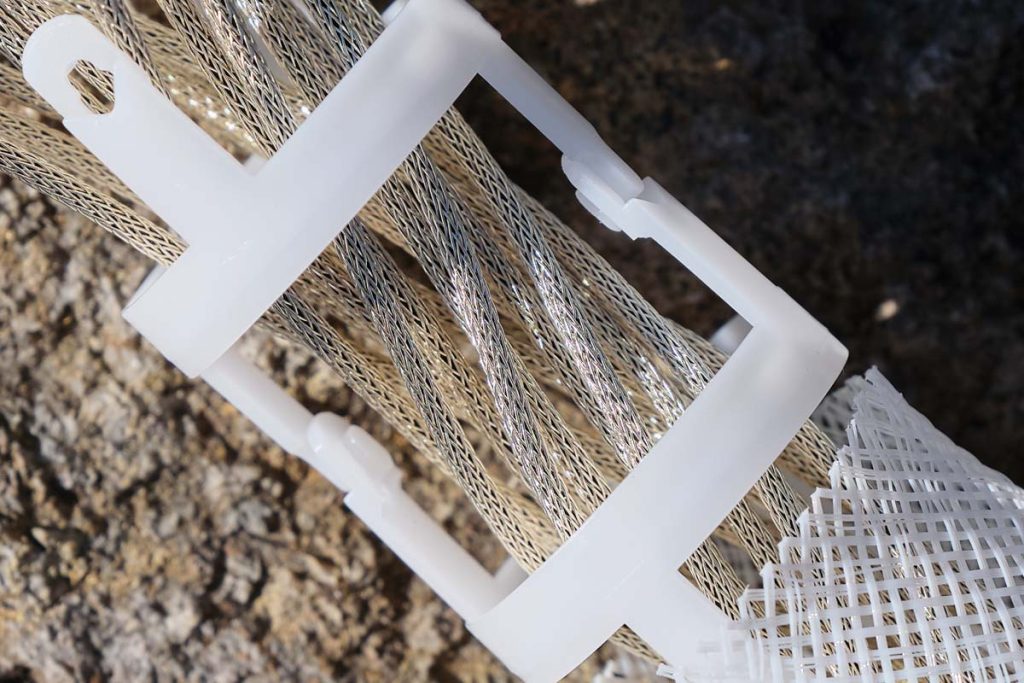 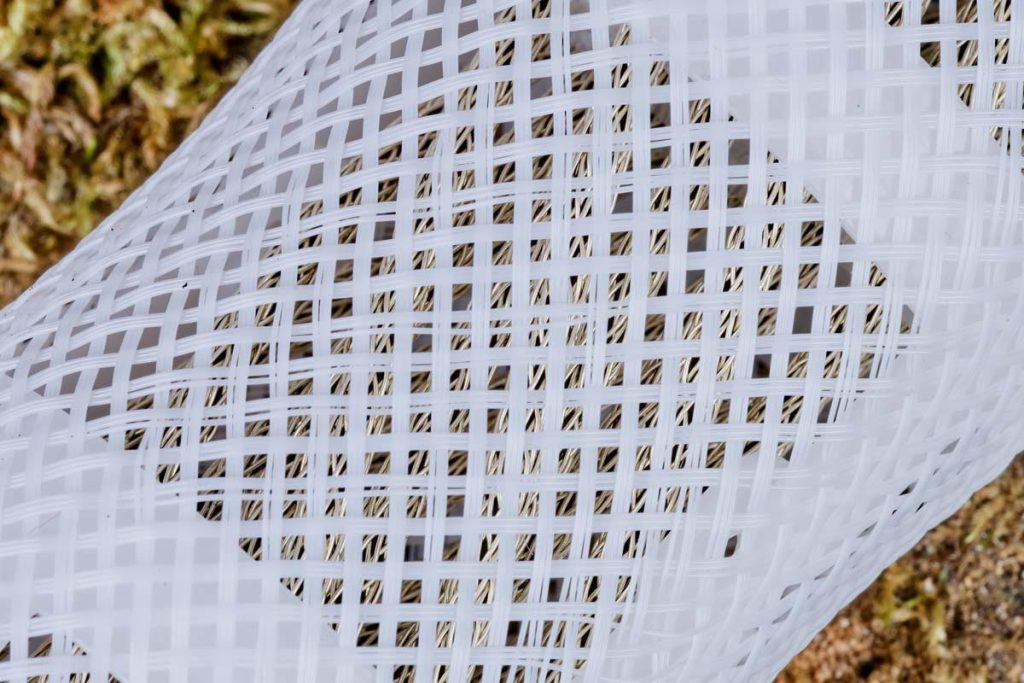 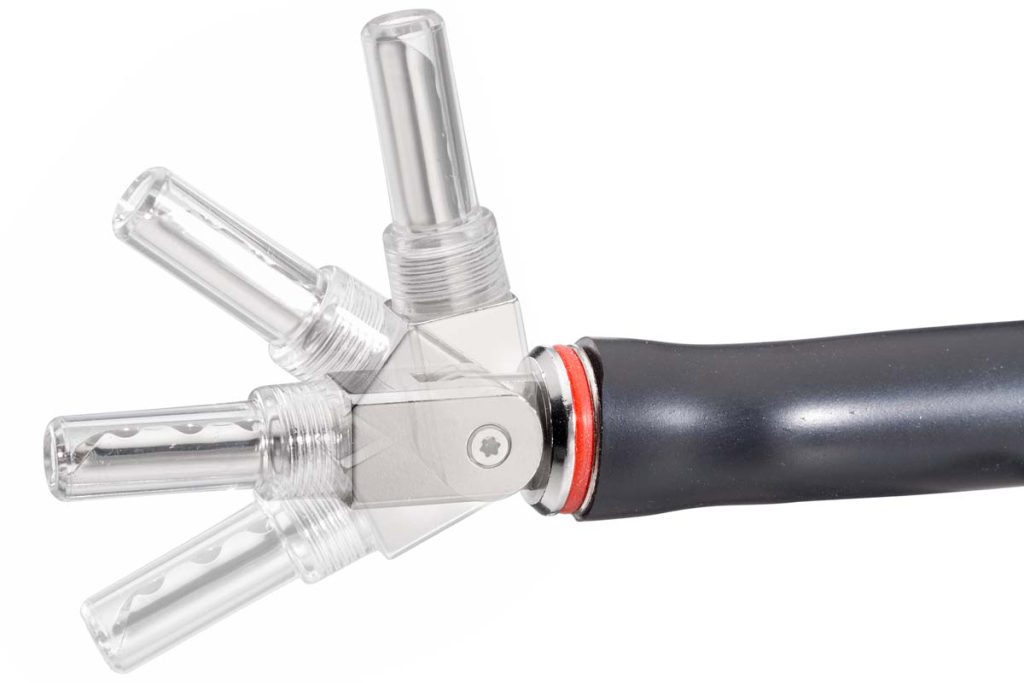 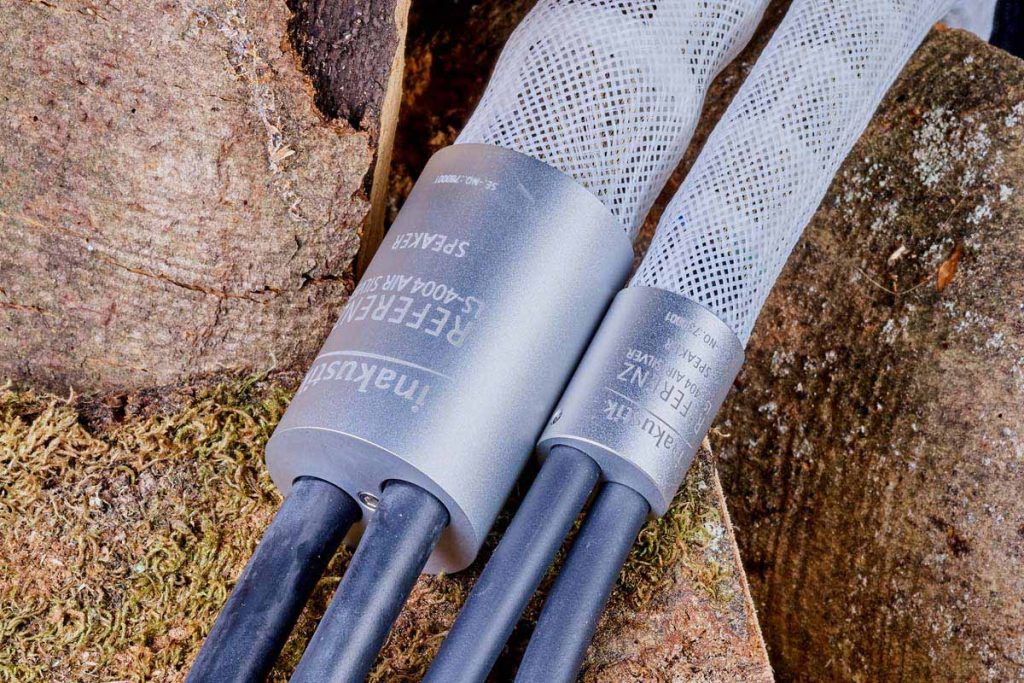 Fiercely beaten kettledrums might be one thing, rock-hard groovy computer bass is something else altogether. The 25-year-old German-Canadian pop singer Alice Merton, a small woman with a big voice and impressive songwriting skills, released the EP titled “No Roots” last year and dominated the German charts for months on end with the catchy title track before also releasing the long-awaited LP “Mint” (on Paper Plane Records Int.) a few weeks ago. This is a memorable pop album: Merton understands how to write tenacious earworms that get you singing along by at least the second time you hear the song. The prereleased maxi single had the problem that it was rather casually mixed at a level suitable for ghetto blasters to be sure to impress its specific target audience — which, incidentally, it did. At just over 39 minutes, the album sadly turned out to be a little short, but it did benefit from the sound engineers having carried out some fine-tuning, for example by pulling back the companders a little to give the album some of the dynamics it had previously been missing. Even the hit “No Roots” came across as slightly more transparent and more focused on the voice: The Referenz LS-4004 transported those very subtle differences and made them very clearly discernible to my ears. The in-akustik developers were also determined to prevent time delays and frequency shifts in the cable, so I found that virtual sound sources pretty much didn’t “drift” at all. The vocals sounded so clean and unencumbered by hissing like never before. And the bass kicked in so vehemently my feet began to tap all by themselves.

The silver cable really came into its own, however, with voices and instruments that had been recorded for all eternity without using any studio trickery. The four seasons being evoked by the Anne Bisson Trio on the direct-to-disc LP recording of the Four Seasons in Jazz — Live at Bernie’s developed into a hot-cold trip complete with goosebumps because this already fantastic recording received a simply staggering sense of presence and immediacy from the in-akustik Referenz LS-4004 Air Pure Silver. These white snakes can really fly if you feed them the right kind of music. They’re unbelievably good. The in-akustik LS-4004 is without question one of the most elaborately designed cables on the global market. The cable is so complex, machine-based production pretty much automatically rules itself out. In an interview with the FIDELITY editorial team, the cable developer Holger Wachsmann reveals why air is the most important component in this top-of-the-range loudspeaker cable.

FIDELITY: Air as a dielectric, a cable with a helix structure: What is the main idea behind the intricate design of a loudspeaker cable such as the Referenz LS-4004 Air Pure Silver?

Holger Wachsmann: Let’s look at it in detail: We all know what it’s like when we take off a sweater with a high synthetic content — it crackles and pops. This is because the synthetic fibers become electrically charged and then discharge again in a flash, in the truest sense of the word. The same effect takes place with insulating materials such as PVC, polyethylene, and Teflon. These materials store electrical energy and then release it with a time delay, which has a negative effect on sound quality when audio signals are transmitted along a cable. The measurement of this is cable capacitance, which depends heavily on the insulating materials used. PVC, for example, increases the capacitance value by around 4.5! On top of that, there are dielectric losses. Air, however, behaves neutrally in this regard. That’s why for a long time, we’ve been focusing on insulation — that is, the dielectric — and have been increasing the air content by using foamed polyethylene or even polyethylene capillaries. But we’ve always been inspired by the thought of making a purely air-insulated cable, which ultimately resulted in this Air Helix.

FIDELITY: To what extent do in-akustik’s less expensive cable lines also benefit from all the development work that goes into the top models?

Wachsmann: The top-of-the-range cables from our Referenz series have evolved gradually over the years and remain part of a continuous development process. “Smaller” models actually also benefit from the Air Helix technology
these days, for example the Referenz LS-1204 and the Referenz NF-1204. Others will be added in the future.

FIDELITY: What direction is cable development taking? What should we expect to see this year?

Wachsmann: I can’t really reveal too much at this stage, but we’ll be showcasing various products at HIGH END in Munich, including power cables featuring Air Helix technology.

FIDELITY: What can you tell us about tuning measures for cables?

Wachsmann: It depends on what you mean really. I have to say that I’m not convinced about the effect of “yellow stones” and the like that you place next to cables to supposedly improve the sound quality. Cable bases, for example, which are designed to keep loudspeaker cables off the floor, are a different matter, though. They work on a similar basis as air insulation and reduce the influence of the floor covering on cable capacitance. This
is particularly advisable if you have carpet or floor coverings with a high plastic content such as vinyl or laminate.