John Coltrane: Both Directions At Once

John Coltrane: Both Directions At Once is the Jazz World Equivalent To A Blue Mauritius 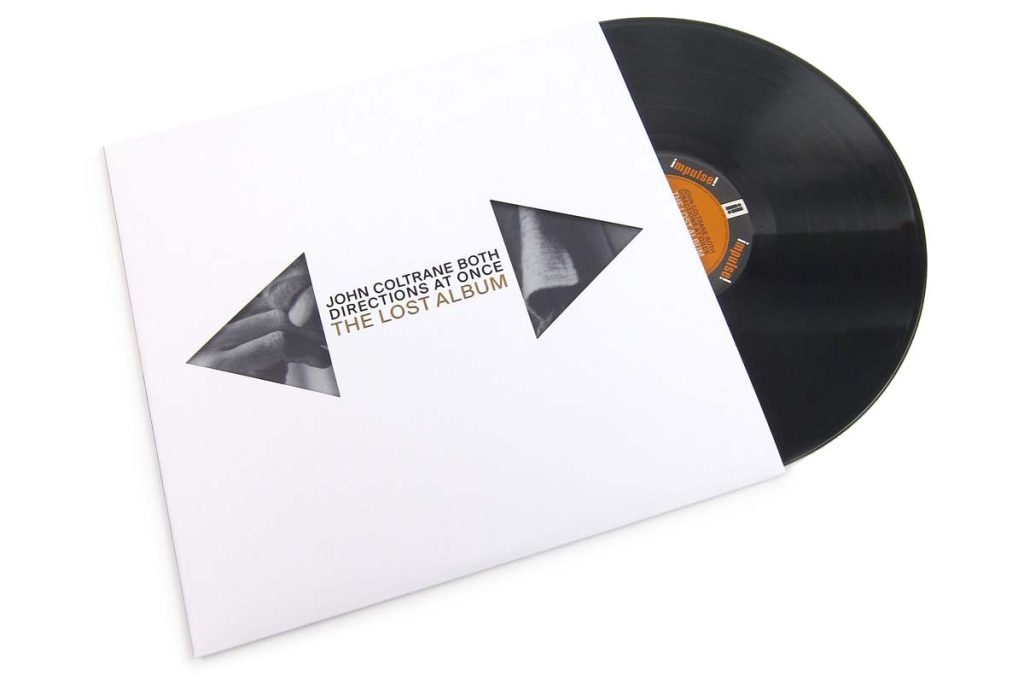 OMG!! A new album from John Coltrane!! It’s almost like finding a long-lost Vincent van Gogh covered in dust in a dark attic somewhere. Or discovering a Blue Mauritius someone once inadvertently stuck to a letter that never reached its intended recipient. The story behind how Both Directions At Once got lost went something like this: On March 6, 1963, the tenor and soprano saxophonist John Coltrane (1926–1967) — who, back then, was as famous as today’s superstars — and his Classic Quartet headed to Englewood Cliffs, New Jersey, or, more specifically, to the studio of legendary sound engineer Rudy van Gelder. Gelder had made a multitude of recordings for Blue Note and also regularly worked for other major jazz production companies such as Impulse!, the label that Coltrane was signed to at the time. The fact that Gelder himself sat at the controls that day in March as “Trane” recorded both old and new material alongside McCoy Tyner on piano, Jimmy Garrison on bass, and Elvin Jones on drums is evidenced by a bit of dialog from Gelder where he can be heard counting in the musicians and giving them instructions.

Not that Coltrane would have needed much direction though. The charismatic jazz musician was a manically, super-driven individual, at times a heavily drug-addicted workaholic, a genius practically bursting with creativity, who mind-bogglingly often flitted between recording sessions and live concerts yet still found the time to explore the boundaries of jazz, push them, and, in the process, always break with convention. One year after the “long-lost album,” i.e., 1964, A Love Supreme was released, a hefty, complex masterpiece that for jazz was at least as defining as it was perplexing as Miles Davis’s Kind of Blue had been in its time. Incidentally, that was an album that heavily featured Coltrane’s saxophone playing. Coltrane’s producer Bob Thiele knew exactly how to put Trane’s gargantuan output to good use and got additional studio time for him, thus making so many recordings possible that would have otherwise never made it. On the downside, Coltrane’s high productivity meant that at some point the musician himself had probably lost track of what he had fed into the tape recorders all that time. The original master tape of Both Directions At Once (incidentally, it was Coltrane’s son Ravi who came up with the name for it after it had resurfaced; it’s intended to symbolize Coltrane’s crossroads between styles at the time) was initially left in the Impulse! archives. This was probably because the label had productions by their jazz top seller, Coltrane, that were capable of selling more copies. At the start of the 1970s, ABC, Impulse!’s parent label, pushed to have many unpublished jazz productions simply disposed of in order to cut down on storage costs. Presumably, the master copy of Both Directions At Once also landed on the trash heap.

But Trane had taken a mono copy home with him, as he quite often did. The tape “survived” for decades after Coltrane’s death, in the possession of his first wife, Juanita Naima Coltrane, but wasn’t rediscovered until 2017 — to the joy of countless jazz fans all over the world. It’s worth buying the deluxe version of the album with two CDs or two LPs: You see, John Coltrane was a meticulous perfectionist who was hardly ever happy with the first take of a recording session. The deluxe version lets you enjoy lots of alternate takes that have their own unique character.

What can you look forward to on this rediscovered album? For starters, a wonderfully laid-back jazz interpretation of Franz Lehár’s “Vilja-Lied” from the operetta Die Lustige Witwe (The Merry Widow). Then there’s the only known studio recording of “Impressions,” a piece that when Coltrane and his combo would play it live would never fail to transport the audience to another world. Two previously unknown tracks were simply given the numbers of the master tapes by the team responsible for creating a publishable hard-copy version of the album. Even Ravi Coltrane didn’t want to come up with names to replace the concise numbers. After all, they would have just been plucked out of thin air anyway, especially since Both Directions At Once is a transitional document: Melodic bliss meets edgy, unpredictable, sometimes disturbing solos that allow you to gain a front-row seat to experience Coltrane’s venture into new realms. How does it sound? Thanks to pristine remasters, it sounds magnificent: always with a sense of presence, precise tonal balance, and a wealth of detail that’s actually crying out for an SACD or hi-res release. Since neither was available at the time this article was written, I “made do” with the Japan Import UHQCD double CD, which gets 99 out of a possible 100 points for sound quality. When I listen to the densely packed track “One Up, One Down,” which people previously only knew of thanks to a wretchedly noisy and muffled-sounding bootleg from the club Birdland, I get goosebumps. First, because the sound time machine works so shockingly well. And second, because there’s no longer a veil between the past and the present.