The Book of Books

Lindemann’s acclaimed Musicbook Series has just released its next generation. The Musicbook Source aims to swiftly top the bestseller lists and become the “book of books” for discerning hi-fi fans. 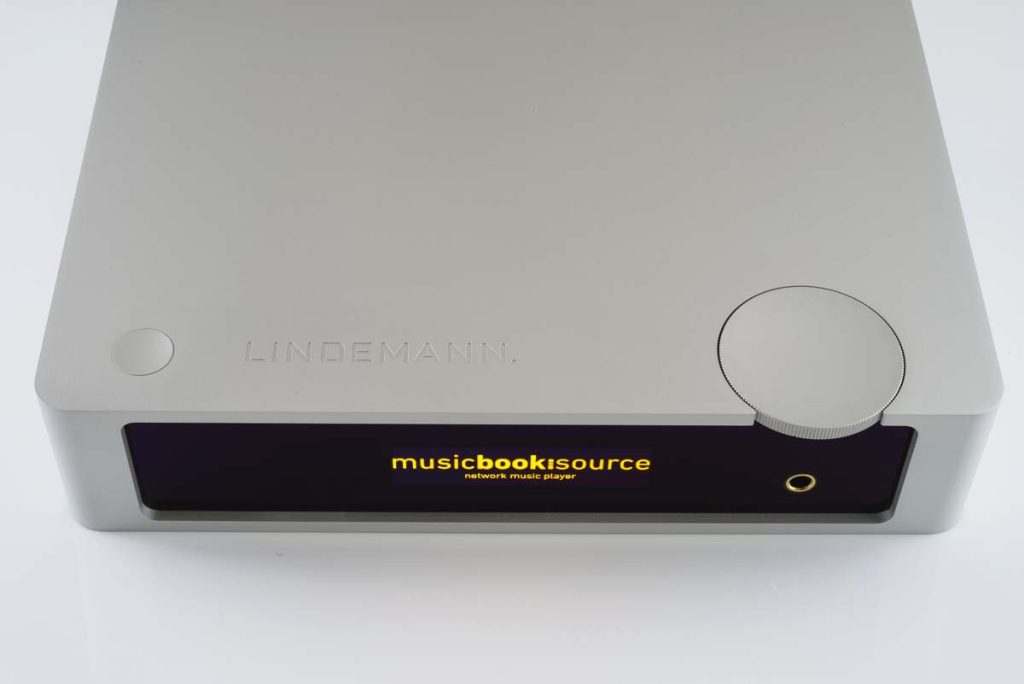 “The times change and we change with them” is a proverb that traces all the way back to Ovid. Yet it is also clearly the driver for development at the high-end manufacturer Linde­mann Audio. Our test object, the new Lindemann Musicbook Source, is the company’s answer to the current hi-res streaming megatrend. This elegant product also displays passionate connectivity, with three analog inputs — including phono MM — and two digital inputs. Available for around €3,300, the Musicbook strives to be the kingpin of any hi-fi sys­tem to which it is added. And it more than measures up to the task.

The Source has ushered in a significant­ly leaner form to the Musicbook series overall. This handy, reference book­sized device can easily replace all other previously released Musicbooks thanks to its all-around capabilities. It not only partners with the Power 500 and Power 1000 Class D power amplifiers, but also previous models in the series can be transformed into streaming 4.0 platforms via hardware upgrade (such as the Musicbook 25 DSD streamer) or the addition of the Limetree Bridge adapter. 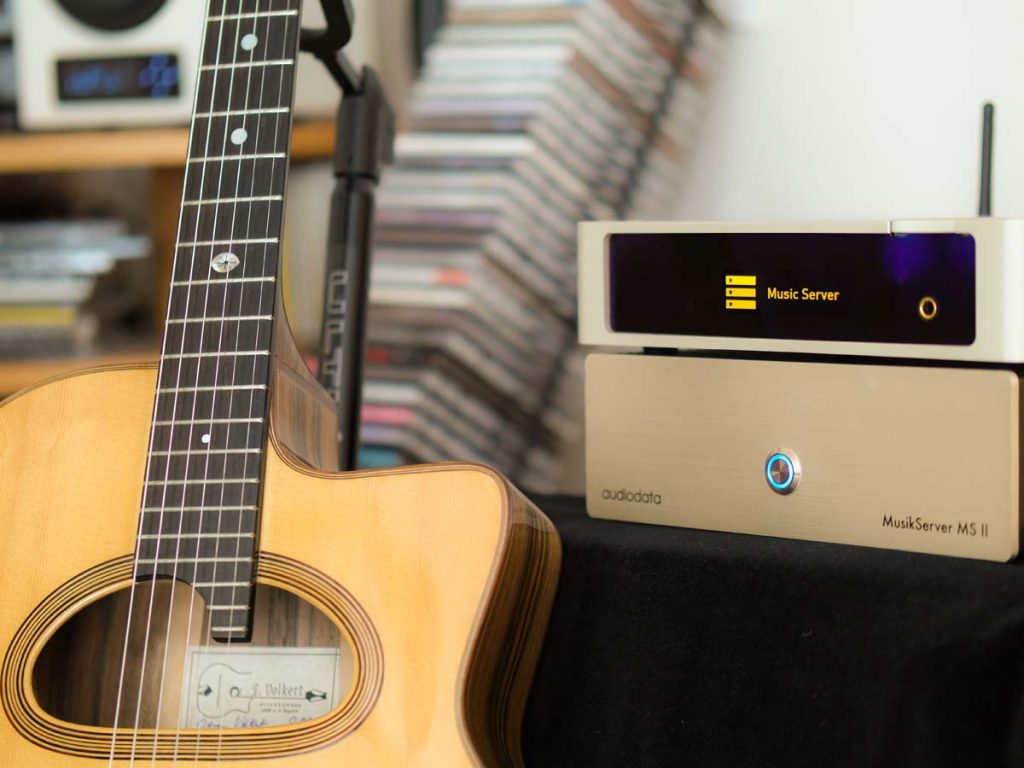 Company mastermind Norbert Linde­mann emphasizes streaming technol­ogy’s important role at the company: “Those acquainted with me know how open I am to new ideas. Before too long, we will only be listening to music from the internet — of this I am certain. For the younger generation, physical media such as LPs and CDs are simply a retro fad. Most of the time, music is being streamed. Even though I’m a real vinyl fan myself — and the new Musicbook Source reflects this — I am aware how excellent hi-res streaming has now become. Our devices take this realization to its logical conclusion.” This statement leaves us unsurprised to discover that our test device has a net­work player with pre-installed TIDAL, Qobuz, Deezer, HighResAudio and Spotify Connect streaming services, and can also play music from NAS mu­sic servers and other storage media in studio master quality. Of course, Music­book is also “Roon ready” , and a “Con­nect“ button on the reverse side links to the user’s WiFi router within seconds. Those preferring wired connections can establish instant connectivity with the supplied LAN cable. But what about those die-hards who still want to play their beloved CDs? Norbert Linde­mann hasn’t left them out to bemoan technology’s relentless advance: they can play their precious discs using an external CD-ROM drive (connected via USB). And, thanks to DSD re-sam­pling (more about this later), the sound quality is also enhanced.

Which brings us swiftly to our next observations. Norbert Lindemann prizes the newly developed DAC as the “central component” of this device. The converter chip used is the much-praised AK4493 from Asahi Kasai Microde­vices (AKM): a 32-bit 2-channel DAC with “Velvet Sound” technology allowing for low-level distortion char­acteristics and a wide dynamic range. The DAC integrates an OSR Doubler switched capacitor filter, enabling it to support wide signal range and achieve low out-of-band noise, all while using low power. The digital input supports up to 768 kHz PCM data and 22.4 MHz direct stream digital (DSD) data (also known as DSD 512). Accord­ing to AKM, this makes it ideal for high-resolution audio source playback. Norbert Lindemann says: “These spec­ifications are actually not so important for the sound — they’re more useful for advertising purposes. However, I was totally won over by the chip’s sound and lack of distortion at low volumes. In optimizing the production process to enhance the sound, the Japanese manufacturers have completely rewired the AK4493. Comparing it to my reference media — vinyl — the AK4493 comes extremely close to the original analog source. Up to now, this is the most impressive sound result I’ve heard in my over 25 years as a de­velopment engineer.” Yet another inno­vation in this device is that all relevant components are controlled “locally” via “outstanding voltage regulators.” According to the manufacturer, the converter’s reference voltage has less than 0.1 .V noise. High resolutions depend on this because the converter generates the output signal from this voltage. The Musicbook has two AK4493s, both operating in mono mode. These combine to create the stereo signal — an extra step that enhances the sound quality. But in order to achieve the absolute pinnacle of sound, the Musicbook utilizes Lindemann’s distinctive “DSD re-sampling” feature, first used in the CD 1 player in 1999.

This special technology was born from the fact that some CD drives, digital sources and codecs have serious systemic jitter problems. And, in DACs without re-sampling, this can seriously impact the sound quality in a nega­tive way. The Lindemann solution is simultaneously brilliant and idiosyncratic: the digital data is read into a first-in, first-out buffer then output with a new clock rate. An ultra-precise MEMS Femto Clock is used as clock reference. In contrast to the familiar upsampling process, the Lindemann system operates synchronously, ensuring the input and output signals have the same sampling rate without any jitter. This means that all digital sources should sound equally pristine with the Musicbook.

DSD re-sampling enables the convert­er chip to act as a pure filter circuit — the internal DSD or Delta Sigma converter is not used. Conversion to the 1-bit DSD signal already takes place in the sample rate converter. We are told that from then on there is an “analog” digital signal that simply needs to be filtered. Because DSP filtering doesn’t occur during playback, impulse and high-frequency repro­duction are said to be far superior. Moreover, because analog filtering only becomes active at 100 kHz, no frequency and phase errors exist in the high-frequency range during reproduction. Lastly, because the DSD signal speed is 12 Mbit/s, impulse response is significantly better than PCM. Exclusive, practical and exceptional While waiting feverishly for the serene sound of the Musicbook, we distracted ourselves with the sleek looks of the housing. Milled from a solid block of aluminum, the manufacturers have somehow made the newest family member even more elegant. But let’s focus on the sound and examine the unit’s connectivity options. As mentioned above, it has three pairs of analog line inputs, one of which is even implemented as phono MM. The manufacturers refer to it as an especial­ly high-quality, audiophile analog sec­tion, and for premium streaming the Musicbook Source also boasts an im­peccable preamp and headphone amp. Norbert Lindemann calls the phono input for MM systems or high-output MCs “truly excellent.” The lack of an MM system lead us to decide against verifying this, or indeed undertaking any unfair comparison with the high­end Violectric PPA V600. Aligning ourselves to the zeitgeist, we focused on the Musicbook’s digital aspects. First we looked at the Lindemann app, available for both iOS and Android, that transforms any smartphone or tablet into a fully-functional remote control unit. We were already familiar with this app, developed with major contributions from Lindemann Audio, from our Limetree Network testing, and found ourselves very impressed.

We were excited to use it again, and we were not disappointed: everything has been implemented in a completely intuitive and self-explanatory way. So much so that we had to ask ourselves why all other manufactures are inca­pable of supplying apps of a similar standard. For example, at the touch of a button the app finds all high-resolu­tion internet radio station streams. We dive right in with the Linn Jazz radio station, enjoying an exquisite LP from the Linn artist and superb jazz guitarist Martin Taylor. This is balsam for ears like mine that still haven’t fully recov­ered from their recent overexposure to “Last Christmas” et al. Although the app is superb, I am pleased that the Musicbook can also be operated con­ventionally by pressing/turning the large jog wheel (on the right) — at least for converting incoming digital signals, playing CDs on the connected Teac drive or listening to the stereo signal from the aging Technics RS B70S on the Geithain active loudspeakers. Perfect for audiophile “book worms” It’s a little premature of us to intensive­ly scrutinize the Musicbook’s sound, so let’s bring it back to the beginning. Connecting the Lindemann “book” to the network router via a LAN cable, I access the Audiodata MS II music server through the app. My listening session begins with the great Paco de Lucía’s Canción Andaluza album using the Source’s headphone output. Working in DSD conversion mode — naturally — the test device expresses the absolute warmth of this delicate and reserved album, recorded by the flamenco genius in his own studio shortly before he passed away. In order to enhance the sound, his Pro Tools system’s DACs had been replaced with softer, more “analog” modules. Paco’s soft guitar sound melds with intimate vocals, while oud, mandola, mandolins and a Pepe Romero guitar with cedar soundboard generate a sublime tonal palette. The Musicbook reproduces every tonal subtlety, with extremely precise transients and a truly remarkable three-di­mensionality.

Listening to music from the Lindemann “book” is a delightful wash of sensory experience, much like settling into a comfy chair to become totally engrossed in a more conven­tional paper volume. The headphone amplifier is certainly comparable to the HPA Violectric V200 — the reference in this area — without quite reaching the same superb level. And the bliss continues when I switch to the active loudspeakers. After selecting Standards Vol. 1 by the Keith Jarrett Trio in 24 bit/192 kHz, the first gentle Steinway tones reveal the Musicbook Source to be a devoted supplicant of the music goddess, able to reproduce the recording in all of its glory. But does the original LP sound better? Hard to say. My solemn judgment is that both deliver true gold to the lis­tener’s ears. However, the Musicbook Source in conjunction with a server is certainly more convenient. That’s why this device is truly a must-have for discerning “book worms” with a digital bent.