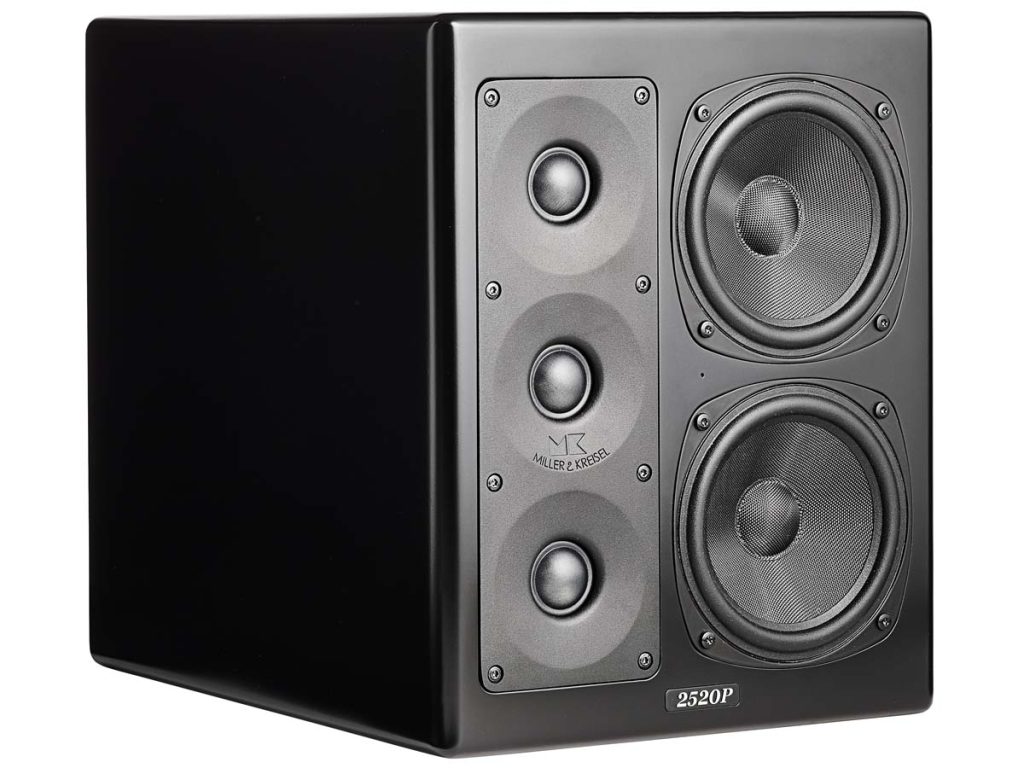 It all began with a pretty innocent request. A musician, sound wizard, and all-around perfectionist needed a better subwoofer to be able to mix what was already an exceptionally well-recorded album and make it even better. So he asked a small and still relatively unknown company that had, however, already gained some experience in the construction of loudspeakers. They put their heads together and ended up creating something that, for its time (1973), was a fantastic subwoofer. Referred to as “balanced dual drive,” the principle behind it is similar to the isobaric principle and, in a further refined form, continues to this day to ensure M&K’s current subwoofers achieve THX-certified bass. This is a good reminder just how easy it is to forget how many great developments over the last few years and decades have never been publicized for one reason or another. The album needing mixing that featured in our story was Countdown to Ecstasy from Steely Dan, and the musician in question was Walter Becker. The rest, as they say, is history. This benchmark-setting model catapulted Miller & Kreisel to fame, making them one of the biggest names on the studio scene. This makes it all the more surprising that here in Germany their name still doesn’t ring too many bells – although when looking at something like the M&K MPS 2520P, it certainly should. 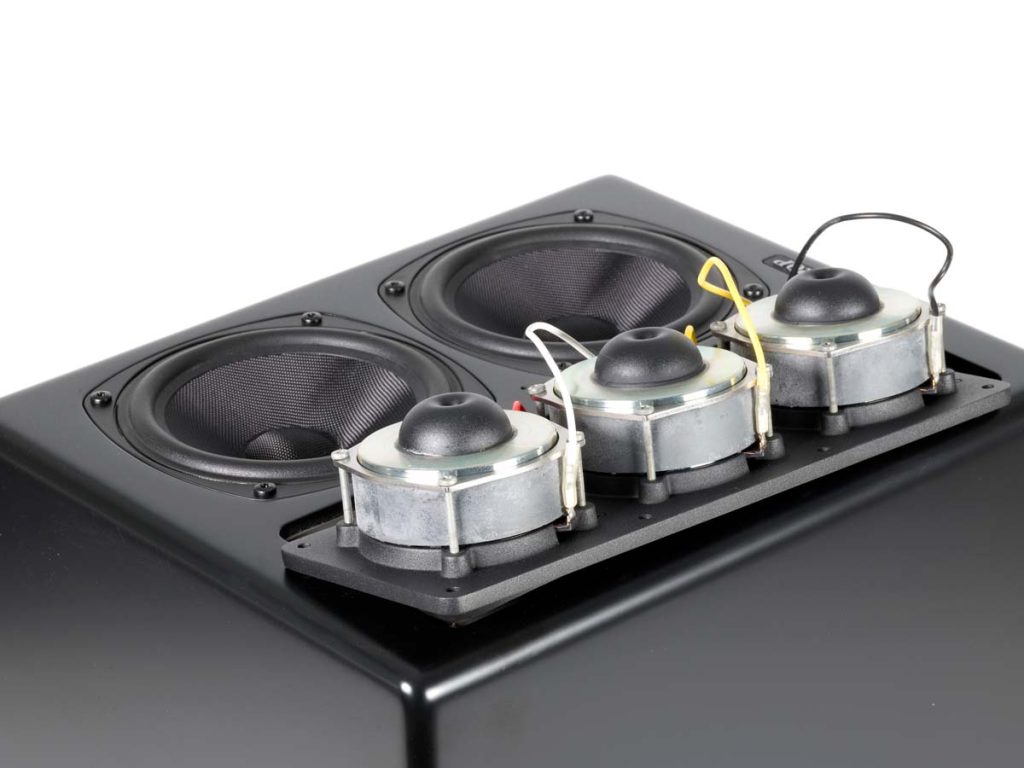 Outside of the German market, Miller & Kreisel has grown into a real giant, in particular in the American studio market, so you’ve probably all come across something produced using these loudspeakers: The full post-production for The Lord of the Rings, the first three Star Wars episodes, Pearl Harbor and other award-winning films for sound quality was carried out using these speakers.

What is it about these surprisingly tiny, unassuming-looking boxes housed in modest, unpretentious matte lacquered cabinets? They don’t seem to even try to fit in with the glitzy, glamorous US production world? These aren’t giant boxes designed to create the Wall of Sound, but rather precise, sophisticated tools evidently made to support suc­cessful projects. 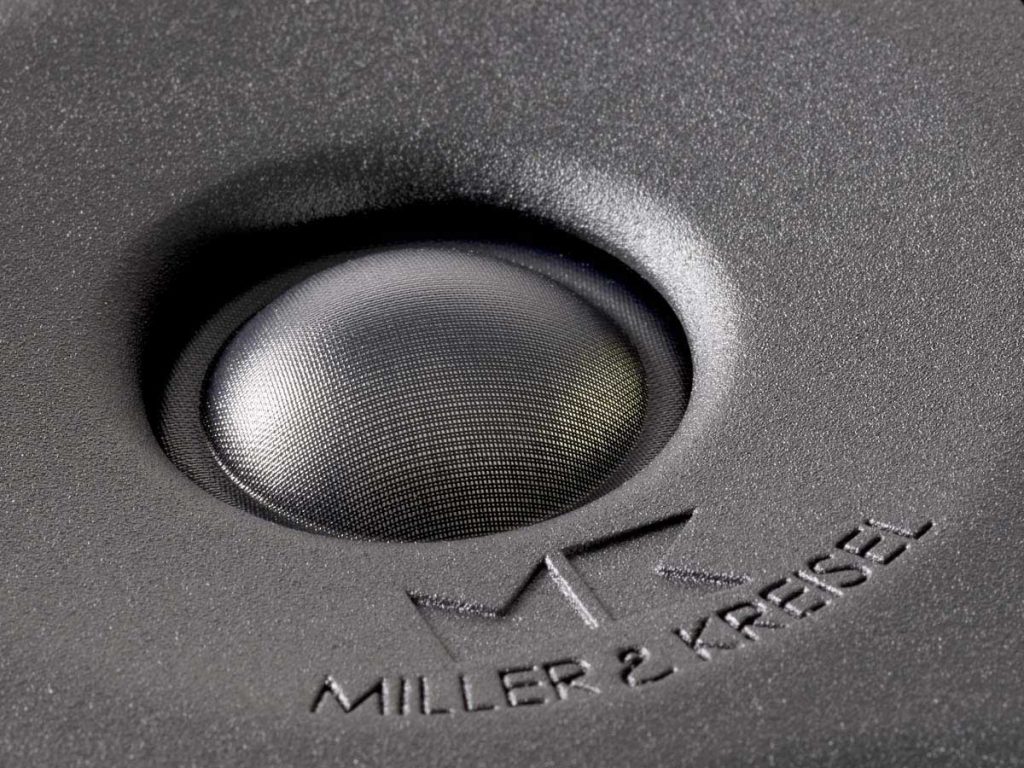 The front of the almost cube-shaped, sturdy housing is adorned with three silk dome tweeters as well as two bass-midrange drivers measuring 15 centimeters in diameter and made from glass fiber mesh. Multiply­ing the number of drivers is seen by many purists as a betrayal of classic teachings, but this clever setup means you can expect to benefit from several advantages: For one thing, the diaphragm stroke is significantly reduced while retaining the same level of sound pressure. This simply translates into less distortion: With accurate synchronization, Impulses can be expressed even more crisply because the chassis in turn only have to hop a bit and don’t have to jump far. What’s more, proper wiring in the crossover enables the sound dispersion characteristics of the speakers to be adjusted with meticulous precision. In our case, this meant the MPS 2520Ps focused the sound more vertically. Reflections from the floor, the ceiling, or a studio desk are, as a result, of less consequence. A room’s interior design can be appropriately less technical if, for example, it’s meant to be a beautiful living room. The vertical directivity of the tre­ble can still be adjusted using a toggle switch on the rear amplifier. While in the living room I preferred the wider version, in the studio I was able to fade out the desk with a single click. 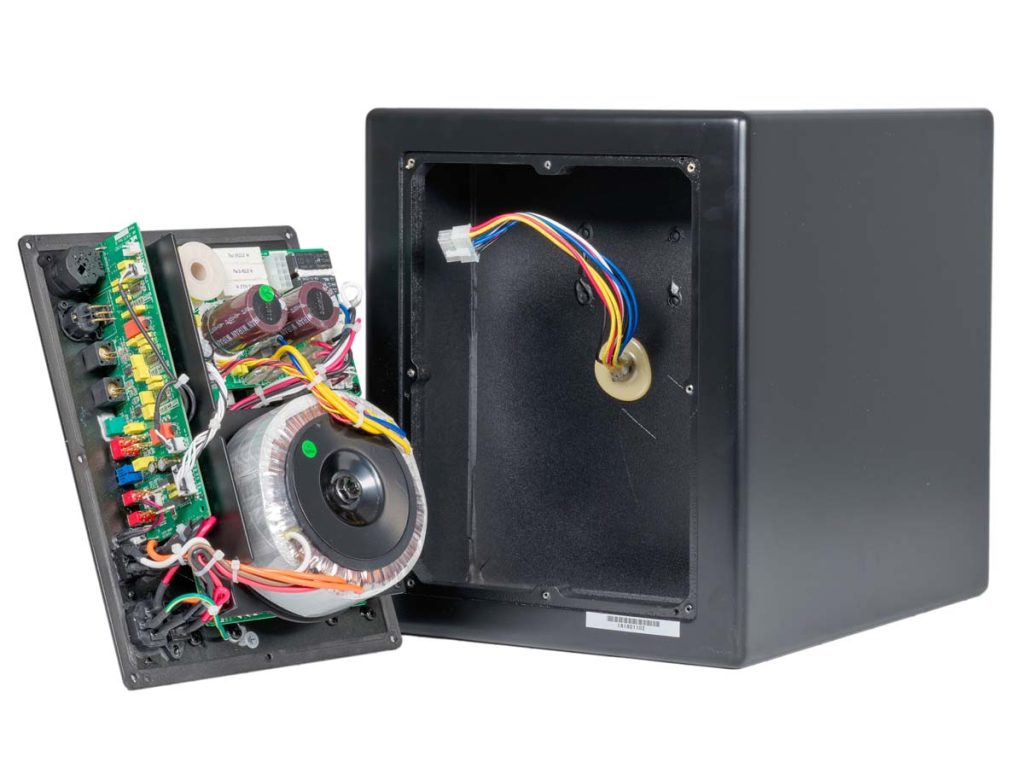 I found the rear of the speakers to be otherwise unremarkable as the usu­al connections and setting options were all present and correct. However, what I did find unusual were the output jacks through which the signal passes and to be then fed into another pair of MPS 2520Ps.

The use of similar or the same drivers across all models as well as of conceptually identical crossovers demonstrates this is a professional setup that takes a “customer-friendly” approach in the truest sense of the phrase. This ensures consistent sound quality across the entire portfolio, which makes your life a hell of a lot easier when setting up multichannel systems. M&K call this “timbre matching.”

I feel absolutely compelled to highlight a simply marvelous feature of M&K’s MPS 2520P while also conveying a little message to the manufac­turer: I’m sure you all know what a headache setting up and positioning new loudspeakers can be — getting all the distances spot on and all the angles just right before you can declare the speakers are finally exact­ly where they need to be. Well, I’ve now managed to make the whole process of getting the right distances much easier by treating myself to a laser distance sensor. When the distance from a specific point in the listening position to both tweeters is the same, it’s nearly on impossible for anything to go wrong. 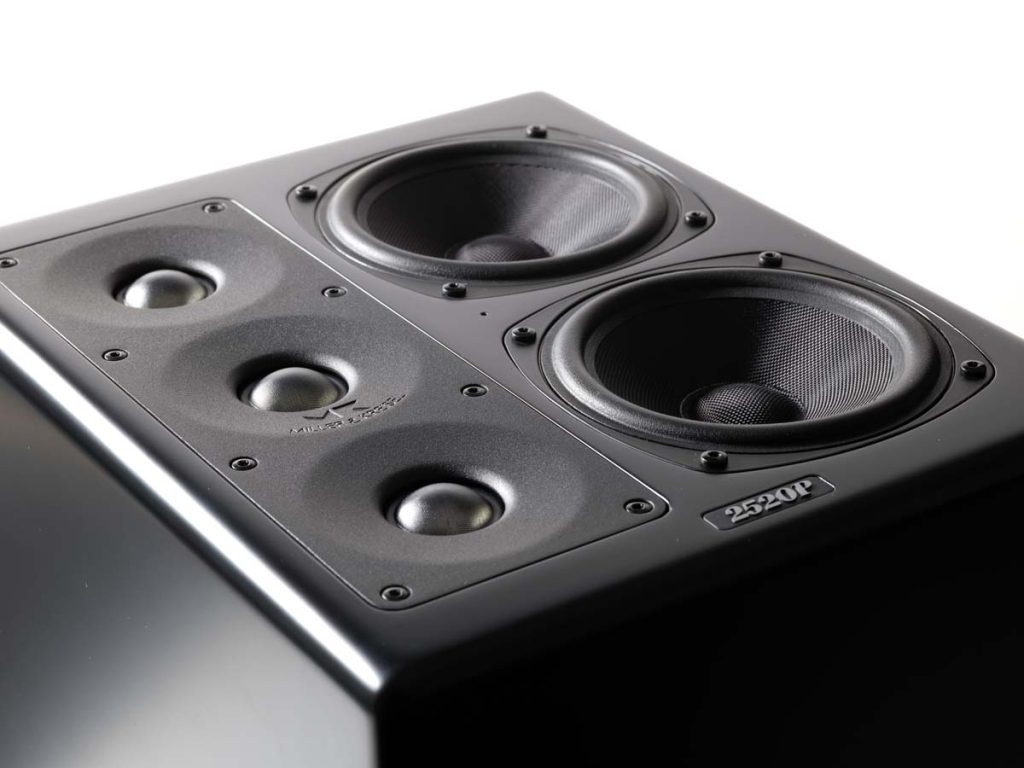 My usual process for perfectly angling loud­speakers is this: I place the distance sensor exactly in the center on top of the first loudspeaker. Next, I place a microphone stand in, in front of, or behind the listening position depending on where the intended axes of the speakers should cross. I turn the loudspeaker until the laser beam hits the microphone stand and then mark the point with a sticker or rubber band. Then I place the laser on the other speaker and turn it until the point lands on the microphone stand and I then align it vertically so the beam hits the marked spot. It’s incredible how well a sound profile clicks right into place if you put in the extra effort from the start. But then life has its own cruel way of throwing curve balls … You might continually find that one of your children, pets, or friends, for example, will gently knock a loudspeaker, nudging it ever so slightly that you wouldn’t even be able to spot it with your eye but you might with your ear as the sound quality will be ever so slightly affected. In some cases, though, it might be so slight that you won’t actually notice it straightaway, and so it’s worth regularly checking the exact alignment. That said – I have to admit even I don’t do that. But get this!: The little LED in the M&K loudspeakers that lets you know the internal electronics are working properly by shining a blue light is set so deep inside a narrow hole that you can only see it fully if the speaker is aligned perfectly with the listening position. I can’t think of a single way to make this helpful tool any simpler or more effective. Kudos and thanks to the manufacturer!

Once both loudspeakers are positioned (ideally with the tweeters point­ing outwards), connected to the preamplifier in a balanced setup and neatly aligned, the fun can really start. As true professional tools I found they take a little time to warm up (around 10 to 20 minutes); but from the very second you switch them on, you know straightaway they are the real deal. In my setup, they function as satellites (which is what they were made to do given they have a built-in fixed 80-hertz, 24-decibel high-pass filter) in conjunction with my Sky Audio subwoofers. 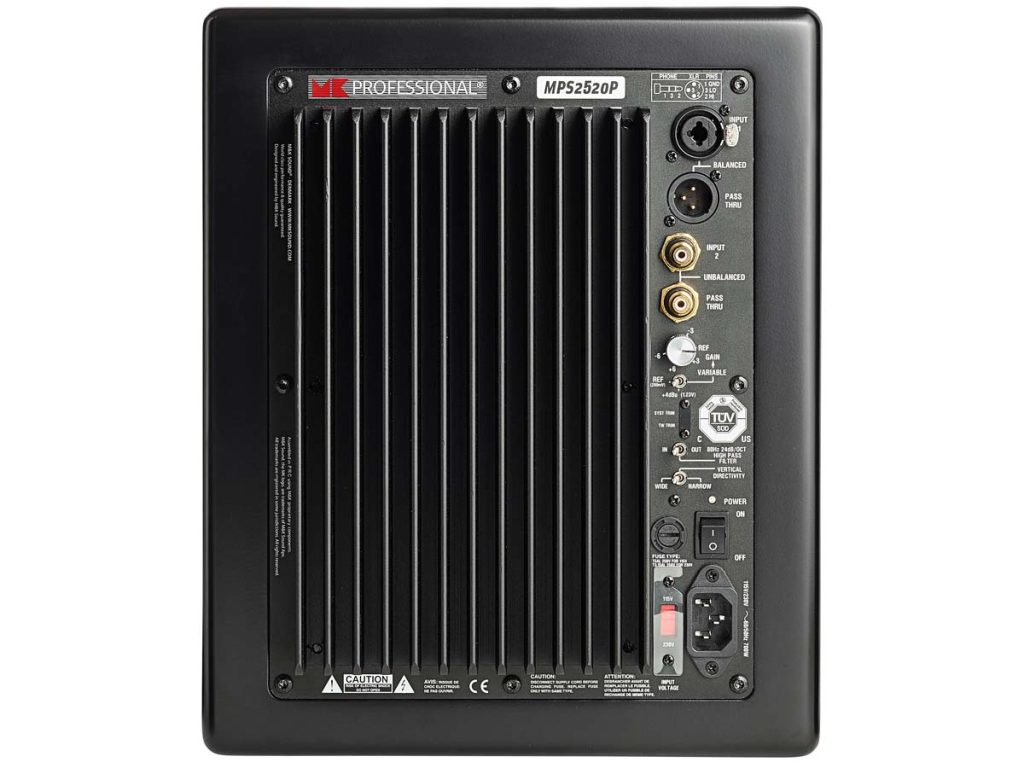 Massive Attack’s Mezzanine was on the turntable and when transmitted through the Miller & Kreisel speakers, the album gave my room and me a proper grilling. Very quickly a first impression formed that would ac­tually grow into a lasting impression as the listening session continued. The MPS 2520P speakers demonstrated an absolutely mind-blowing dynamic spectrum. It’s truly a rare moment to come across speakers that can perform “very quiet” and “very loud” so close together. And they do it with such apparent ease — which is the next standout feature. These handy little loudspeakers knocked out every single fortissimo with such ease that I couldn’t help but think there must be no limits to what they could do. The individual layers of this already special production were peeled back and revealed with meticulous archaeological precision yet without ever destroying the overall sense of continuity tying the whole thing together. These little Miller & Kreisel beauties managed to pull off the feat of highlighting every single detail in all its glory while simultaneously maintaining the overall bigger picture. This was stunning with the laid-back jazz I moved onto next as it increased the credibility of the reproduction. Such a pronounced level of sensitivity with dynamic nuances can only be achieved if the loudspeaker itself op­erates in a very low-resonance, “dry” manner.

Any overshooting of the chassis blurs a small contrast level again. The Miller & Kreisel speakers were also in their element when I listened to a few Strauss operas. In particular Elektra, an unfathomably complex work in so many passages, can sometimes be quite strenuous to experience because overwhelmed loudspeakers that are out of their depths cease having the ability to provide any perspective. You find your brain has to try to fill in the missing or masked bits of information, which, after a while, gets rather stressful. This was never the case with the MPS 2520Ps. They explored and shed light every little nook and cranny of this magnificent recording with Christian Thielemann and “his” Staatskapelle Dresden orchestra. Small secondary voices remained audible even when the brass section was blaring, and I was still able to distinguish a violin part even when a soprano commanded most of the attention at very similar frequencies. In direct comparison, it was clear that elaborate tweeters like the rib­bons of my loudspeakers are able to achieve slightly more detailed, finer differentiation in the highest of realms, but they lacked the American speakers’ firepower. 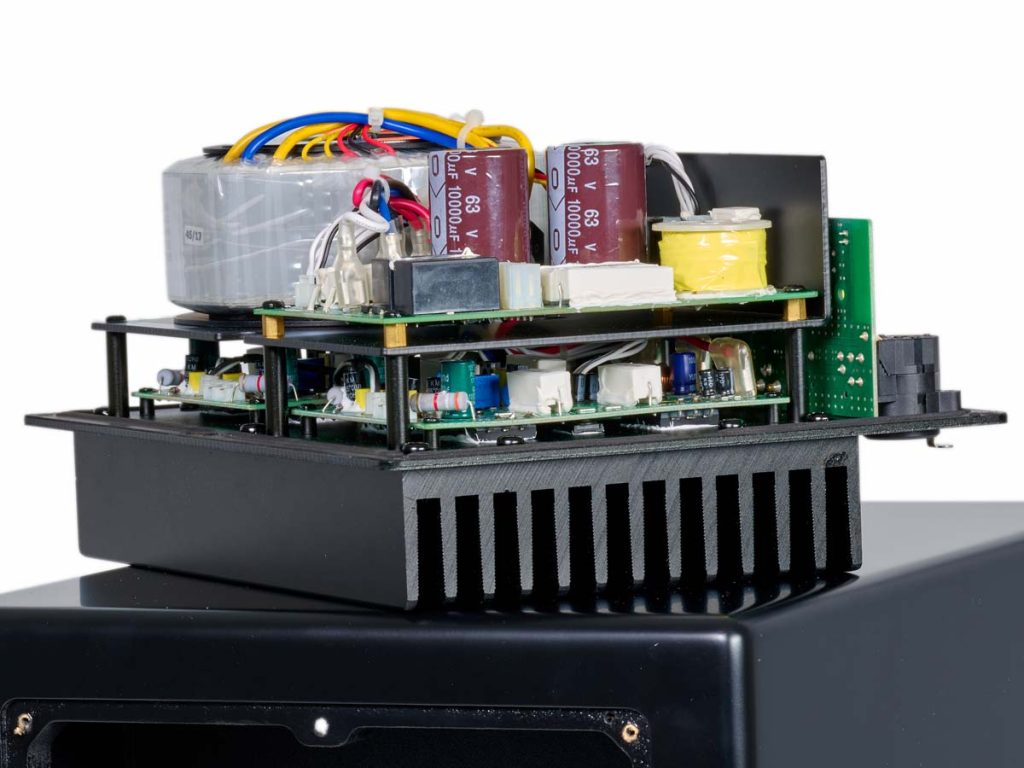 When I used the two M&K monitors as part of my home cinema setup, it suddenly became clear why Lucasfilm uses these loudspeakers for its mixing work. No extreme jumps in dynamics, no explosions, and no sopranos could ever push these loudspeakers into a cold sweat. Given their size, this is nothing short of amazing.

But they’re not just great for reproducing sounds from stomping dino­saurs and roaring Godzillas. Even quieter films — or perhaps I should say, in particular quieter films — such as the magnificent Melancholia written and directed by Lars von Trier, have another layer of distance between the medium and the recipient stripped away thanks to the directness and immediacy of the sound, which I experienced as more credible, believable and “real.” Although you can listen to these loudspeakers at an incredibly high volume, I found myself enjoying movies at a much lower volume — simply because the speech intelligibility was so brilliant even at a lower level. 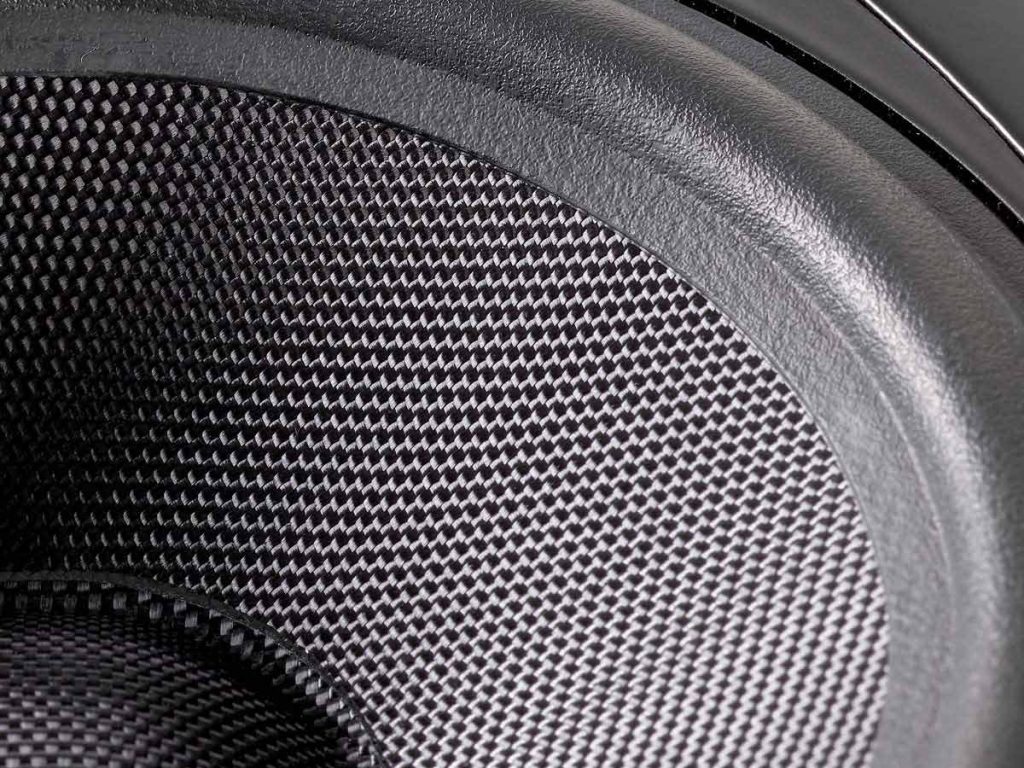 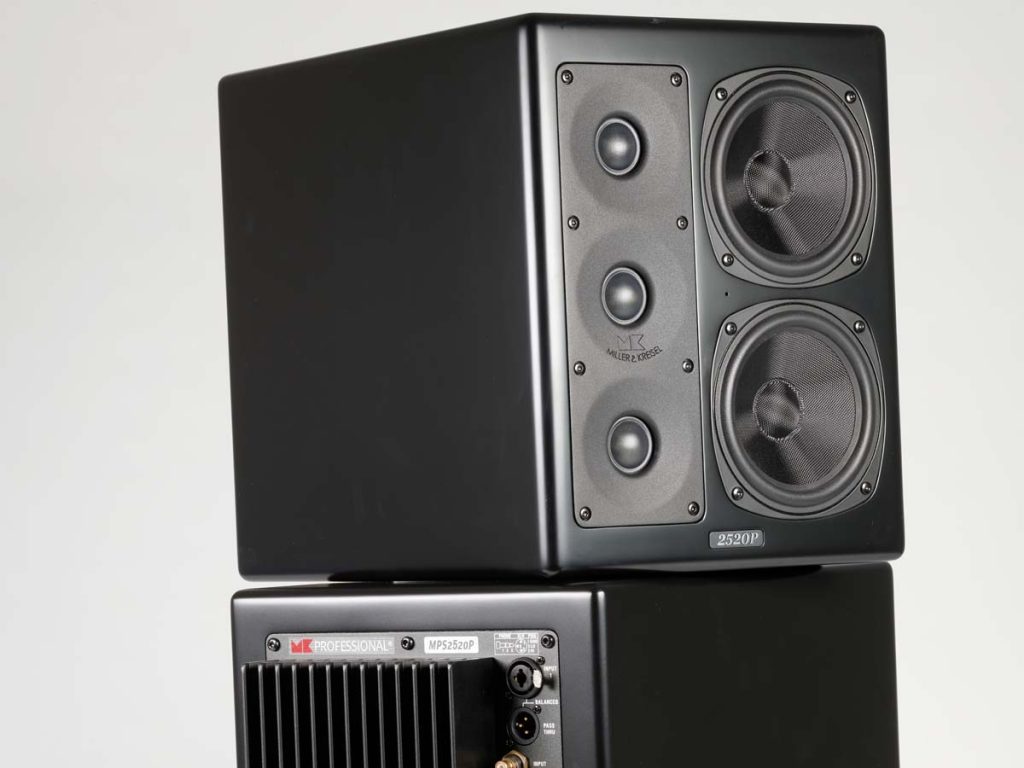