Playback Designs has refined the parameters of digital music playback with the MPS-8 Dream Player. 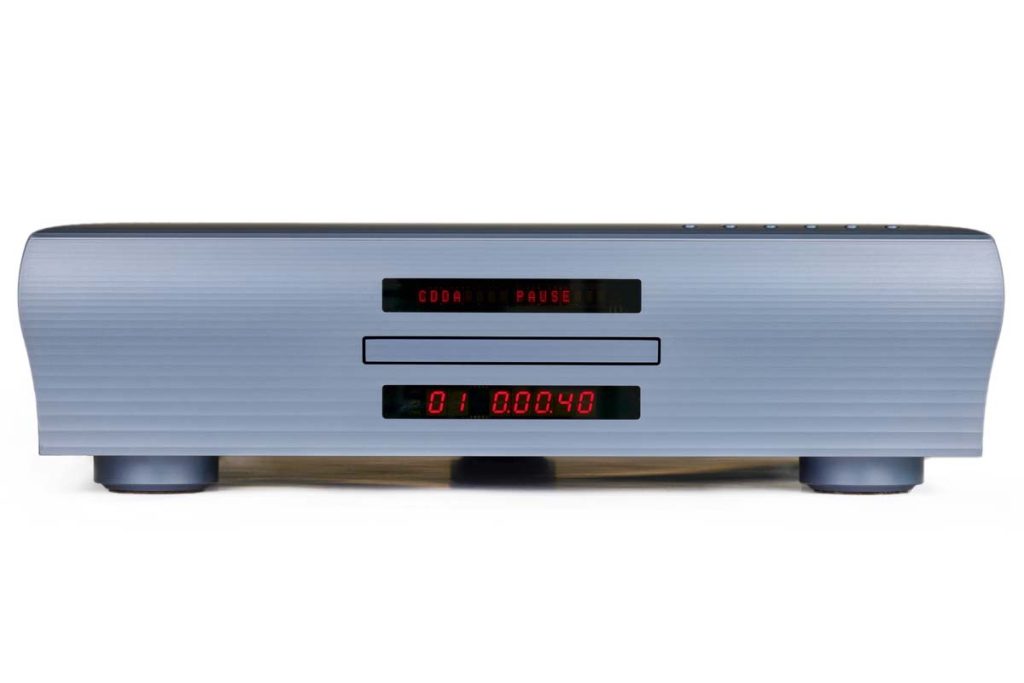 Wow! What an unorthodox, but elegant color and what a dynamic, but singular shape! As soon as I had placed all 18 kilos of Playback Designs’ current top-class (SA)CD player and DAC combo in position, it captured my undivided attention. And when you learn as well that the people behind Playback Designs are none other than the digital mastermind Andreas Koch, who was significantly involved in the development of SACD and DSD, and Bert Gerlach, a qualified doctor and engineer who was responsible for all the post-conversion processes in the MPS-8, you can’t help but stand there feeling awestruck. You might also find yourself standing there rather dazed when you learn the MPS-8’s hefty price tag weighs in just shy of €28,000. But I’d hardly gotten finished with integrating the device into my home system when the tough critic in me took over and quickly brushed aside all that previous information. My plan was to see if the Dream Player really lived up to its name.

You may think my approach to top-of-the-range and luxury audiophile products is a little punctilious or just typically German; but when it comes to devices in lofty price categories, I like to start with properly inspecting secondary qualities such as look and feel and, above all, workmanship. You see, I’ve had to endure more than one unwelcome surprise in my life as an audiophile. For me, the litmus test for assessing a CD player’s production quality will always be the amount of noise generated by the drive, especially since this supposedly secondary quality has a direct effect on the primary quality of the sound being produced. Regardless of whether it’s a front or top loader, I see the critical emission distance starting at 50 centimeters. Even with John Cage’s piece 4’33”, where the musicians have to abide by the musical direction “tacet” for the entire duration of the performance (see title of the piece), I don’t want to hear a peep out of the device, even when I sit right next to it. 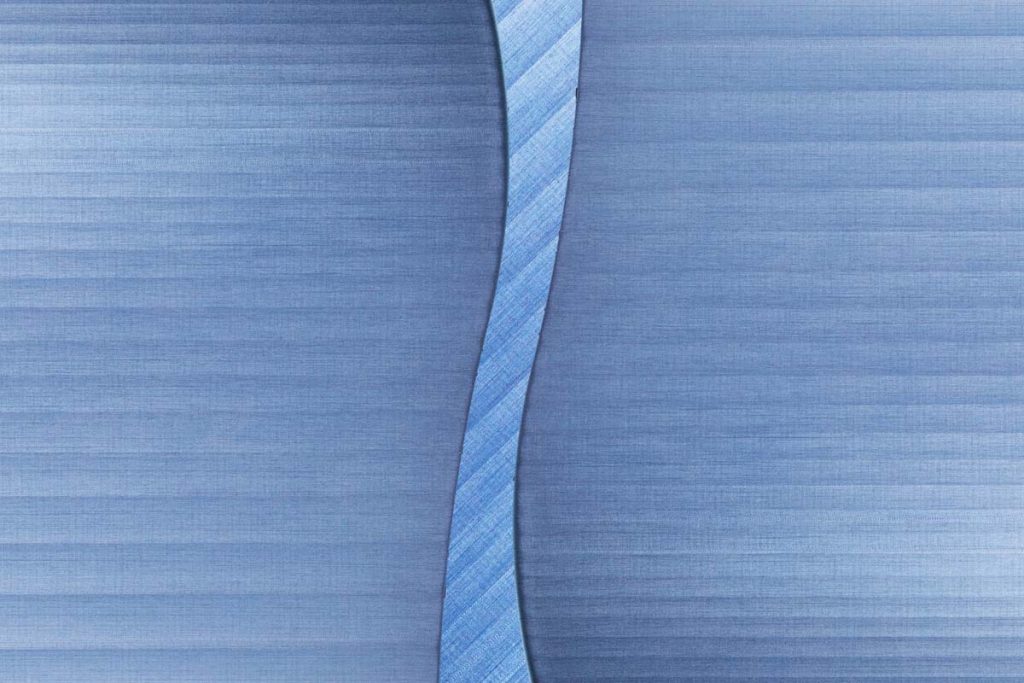 And this brings us to the aspect of the Playback Designs MPS-8 that impressed me more than that of any product for quite some time: From my listening position, I couldn’t hear a single noise, even when I held my ear directly over the player. A deathly silence had descended. This was technology at its best, real state-of-the-art stuff. On that note, I do have to add that the drive is not actually an in­house development but a studio-line creation from Marantz-Denon. That said, it’s the seamless integration and precisely tailored shielding that really make all the difference. And it goes without saying that the player’s external bodywork makes it a phenomenal head-turner. Frank Pietersen from the company’s German sales team also told me that the housings for Playback Designs’ products are developed and produced by a shipbuilder that boasts a portfolio brimming with luxury yachts, which explains quite a few things.

It’s not often you see a commitment to quality kept to such an impressive degree as this. And what about the sound quality? In the end, what use are superior mechanics if the data read emerges unsatisfactorily from the converter? After just the first few bars of Eiji Oue’s benchmark-setting recording of Leonard Bernstein’s Divertimento for Orchestra, I stopped mulling this question altogether and just let my ears take command of the moment. If I were to now simply say that everything sounded correct — that everything sounded just as it was supposed to — you might retort by saying that this device was perhaps a pedantic number cruncher, a buzzkill from the mid-studio category. But if you did assert that, you’d be way off the mark. You see, the resulting sound is first considered correct when the ideal instrument gradation, perfectly balanced spatial volume, complete absence of tonal discoloration, and natural ease go hand in hand with a deeply relaxed flow — only then can rumination about the degree of perfection be squelched. And that was precisely the case here. Okay, okay. The Reference Recordings CD was also pretty perfectly produced, which means a lot of things need to go terribly wrong to make it sound like a mediocre recording. So I shot straight over to the poison cabinet and popped in some rock CDs from the mid 1990s, blessed with the era’s typical digital-dentistry sound. I wondered what the MPS-8 would do with them. No, it didn’t polish or warm them up. If that’s what you’re after, you’ll have to opt for a device with intentional phase manipulation or tube output. With the MPS-8, the authentic early digital sound remained intact. But because the music sounded like it had this laid-back ease to it, my ears were directed straight to the musical flow, which meant that any tonal shortcomings in the recordings were not obtrusively noticeable. I have to admit I’d never experienced this in such a way before, not even with analog playback. As Hanns Eisler and Bertolt Brecht both said, it’s the simple things that are hard to do. It follows then that the effortlessness of the MPS-8’s music reproduction is fueled by a technical masterpiece and all manner of innovative digital inventions. Contrary to the mainstream doctrine, it isn’t discrete components that carry out the conversion work but special ICs. Andreas Koch has programmed the algorithms of these FPGAs so they increase the sampling rate to many times the standard DSD rate. This is the only way to implement sophisticated digital filters, known as “adaptive apodizing filters,” that are responsible for the naturalness of the sound. The nice thing about this is the absence of trying to achieve any supposed “higher, faster, farther” ideals in terms of resolution, and the technical know-how serves the listener’s ability to enjoy the reproduction and that alone. 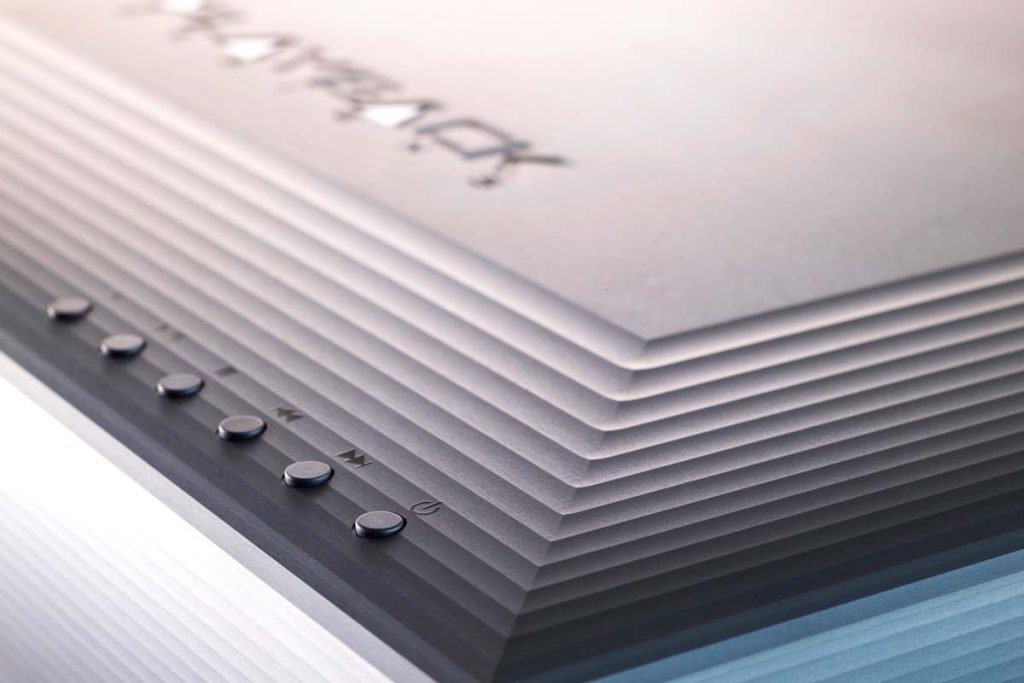 I also wondered how the MPS-8 would behave when faced with files fed by USB. I primarily stuck to FLAC files with different bit rates as the availability of DSD files in the relevant download stores is still pretty limited. Unlike with the upsampling of an (SA)CD, the files being played here would essentially get upsampled to 352 kilohertz. In theory, the USB input should be superior in terms of sound quality. Bert Gerlach is confident about the results produced by the in-house-developed PDFAS (Playback Designs Frequency Arrival System), which is designed to reliably eliminate jitter. I wasn’t, however, able to make out any real difference compared with CD playback using the internal drive. I could hear the already familiar effortlessness and perfect transparency when I played Rolf Kühn’s new album Yellow + Blue. Mean-spirited high-end fans sometimes like to focus on trivial matters relating to the music in order to draw conclusions about the quality of their system’s playback. Some developers capitalize on that by deliberately placing a strong focus on chiff or the movement of an instrument’s keys; this ultimately results in audiophile razzle-dazzle taking over. Of course, I could also make out Kühn’s chiff and heard the clearly recorded sounds made by his clarinet’s keys, but that never sounded excessively prominent and was embedded in the general flow of the music. I also got the impression the upsampling resulted not in a higher resolution but in more natural playback. 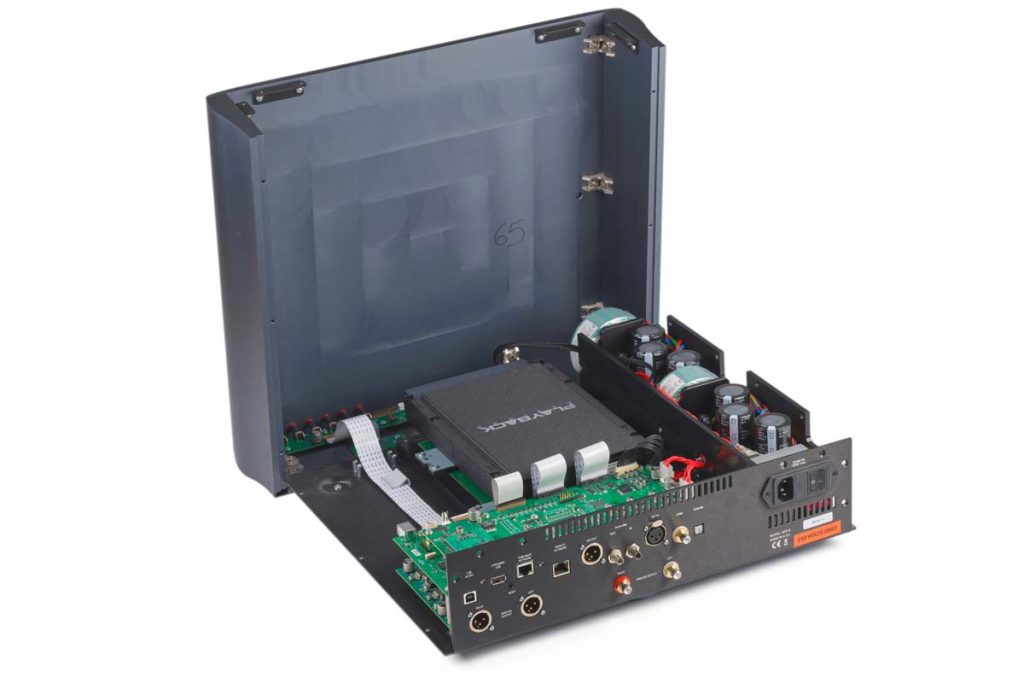 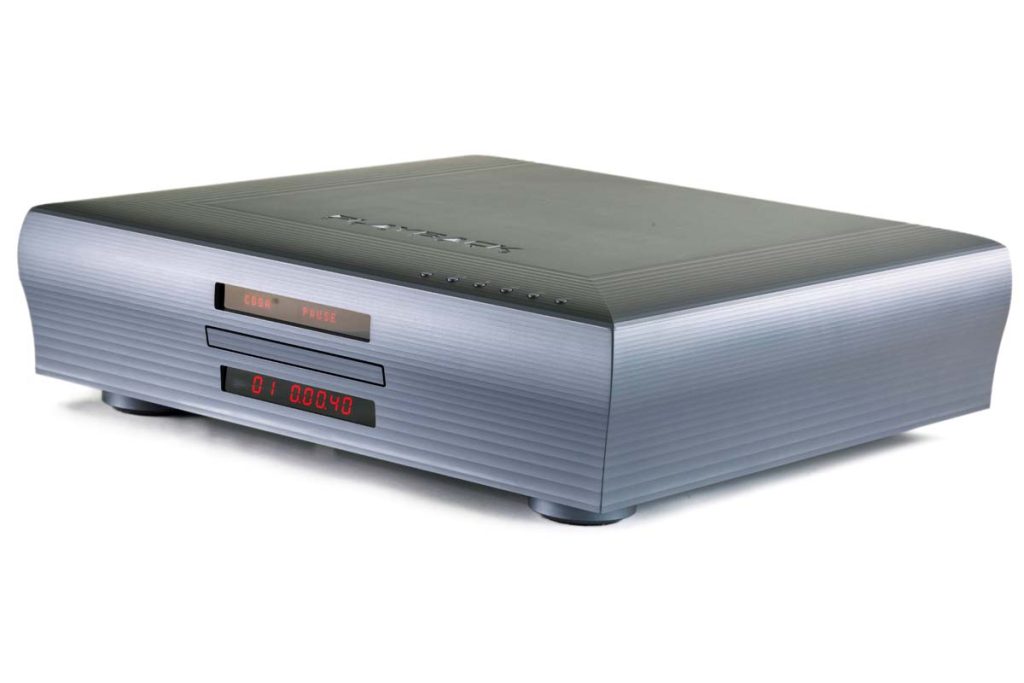 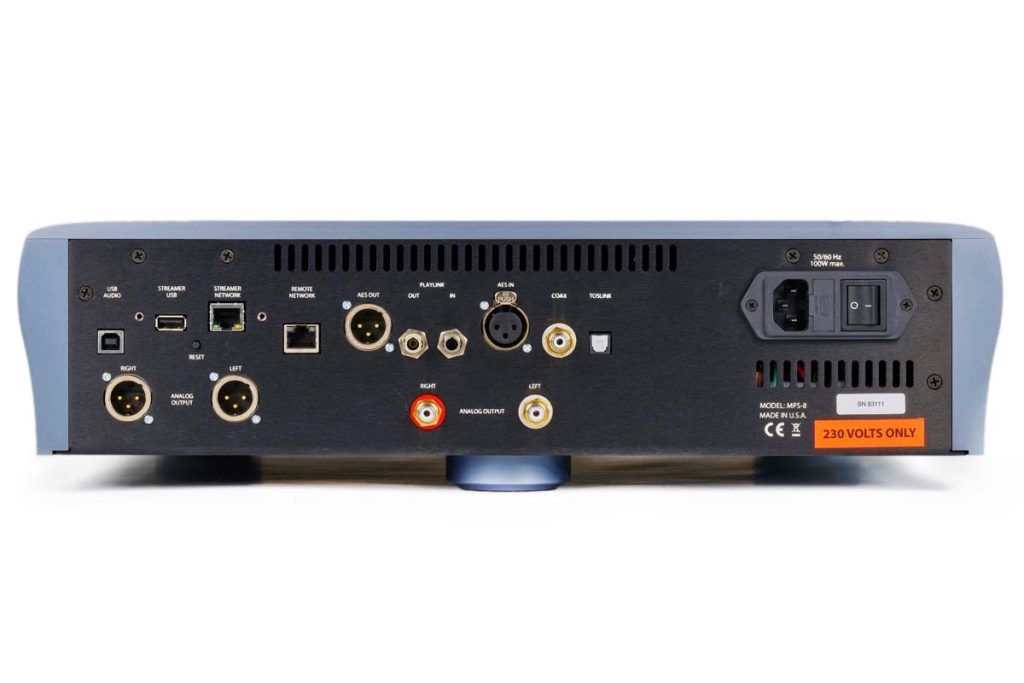 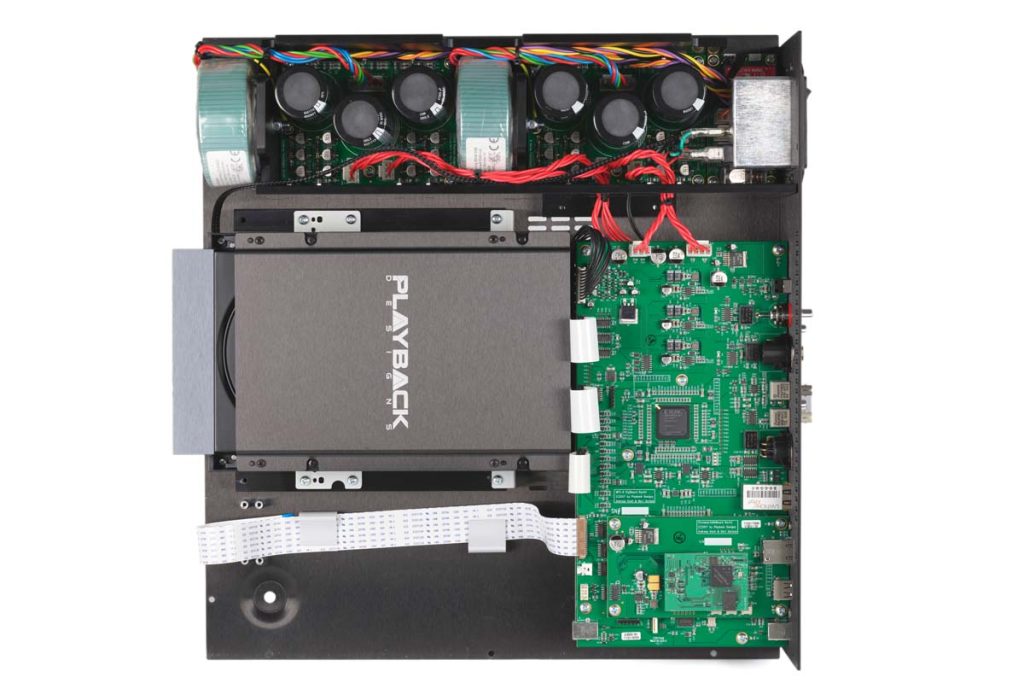 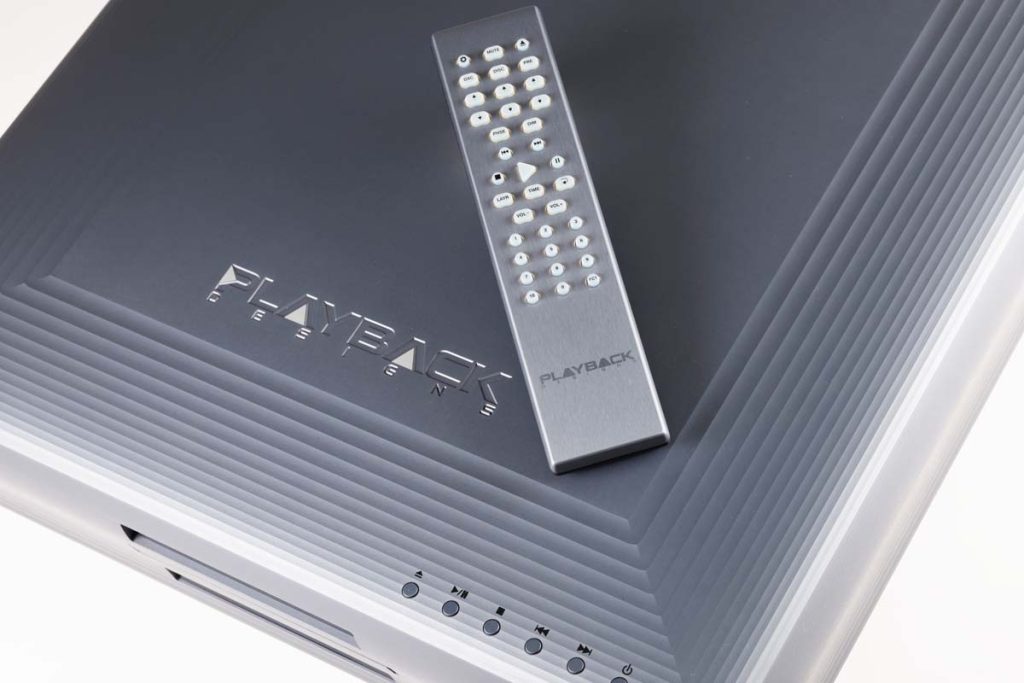 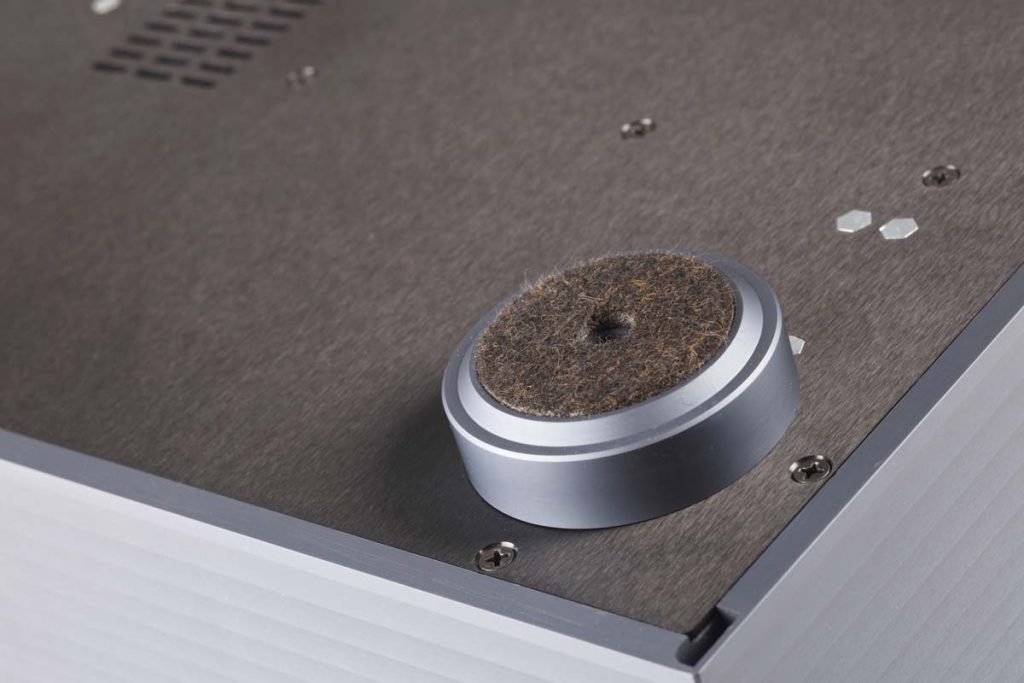 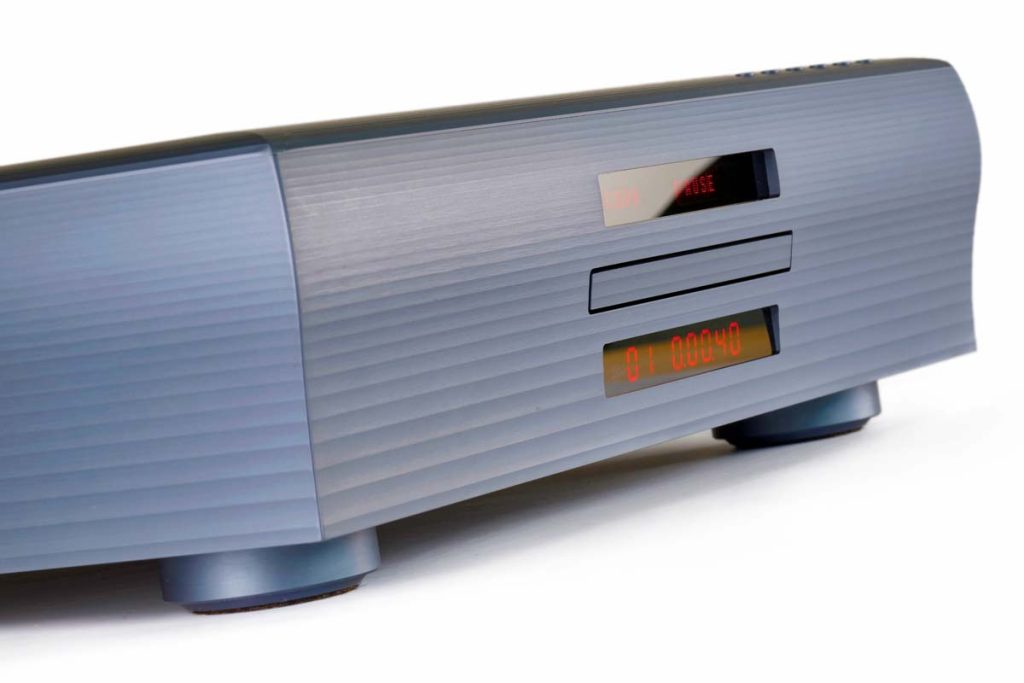 On the advice of the sales team, I also used the MPS-8’s preamplifier section. Alternating between connecting the device to my power amplifier and my active studio monitors, I was amazed at the immediacy that could be achieved like this. I quickly realized there was absolutely no need for an additional preamplifier unless you wanted to achieve a specific sound or connect additional devices, that is. Slightly more direct and a tad more dynamic: The music seemed a bit different to me, which I personally liked even more than before with my own preamplifier. Using the remote control, the volume was easy to adjust at the tiniest of increments. As a result, anyone who prefers a purely digital setup should definitely consider the minimal configuration of MPS-8 plus active loudspeakers; in view of the player’s attractive design, this is a tantalizingly minimalist option in terms of style, too. Before I wrap things up here, I should mention the additional streaming module available for €3,000, which I didn’t have for this report. With it, you can also directly integrate the usual services and portals. Since I’m a fan of direct computer connection, I wasn’t all that bothered about not having it. But regardless of how you operate the Playback Designs MPS-8, you’ll definitely find this really is as good as digital gets. The name “Dream Player,” is no exaggeration. It’s a validation.