Around here, we tend to either not recognize the musical world of the Middle Kingdom at all or, at best, look at it with a certain condescension. As is so often the case, this attitude is a mistake, as by now, China boasts a whole host of top-tier-orchestras and magnificent halls are popping up like the proverbial mushrooms these days. As we’ve already reported on the Chinese capital’s concert hall, it’s now the hot south’s turn. And for good reason, too, as the Shanghai Symphony Orchestra is the oldest and pretty much the highest regarded among the country’s western-oriented orchestras. 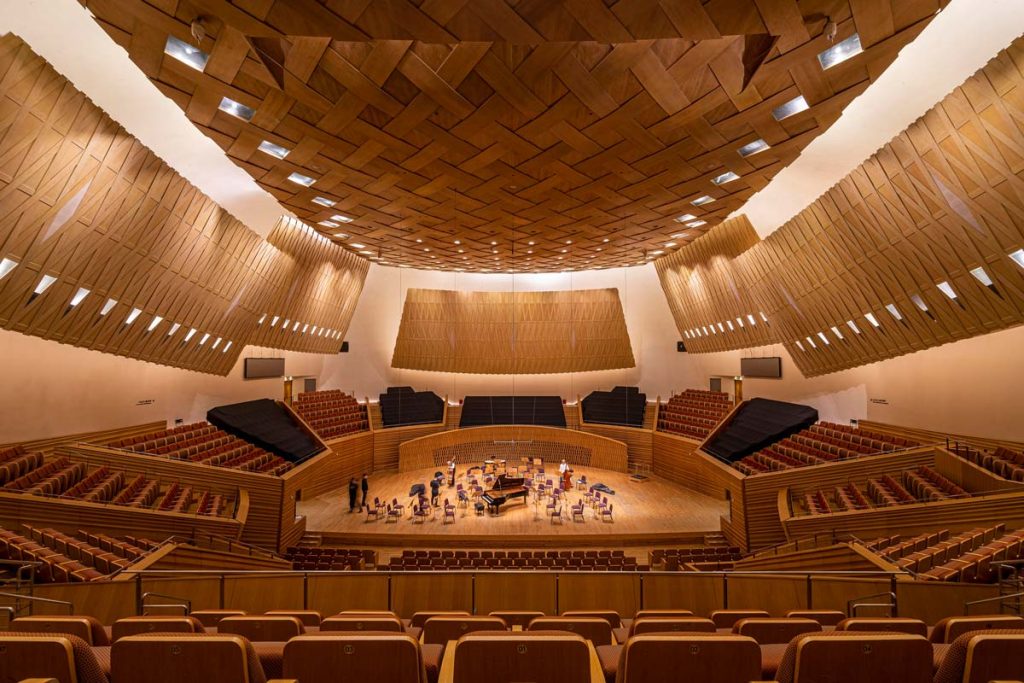 Since in China, big decisions are often swiftly made and readliy financed, the appointment of a new chief music director put the topic “new hall” on the agenda as well. The realization of the plan followed with no delay, and with no false modesty either: With Arata Isozaki and Yasuhisa Toyota, the team of architects hired was pretty much the worlds most desirable as well as the most costly one, and the hall opened its doors to the public after an astonishingly short construction period of only two years.

As a musician, several narrow flights of stairs drop you in a subterranian maze of hallways connecting the grand and the small hall, a studio, a rehearsal stage as well as a plethora of tuning rooms and wardrobes. The place corroborates an observation I could already make more than once in new chinese concert halls: For the people working here, these halls, with their wide halls, huge wardrobes, short paths and plenty of storage space everywhere are a dream manifested in stone which european halls would do well to learn a lesson from. Or two, in fact.

When viewed from the stage, the Shanghai Symphony Hall looks a lot bigger than it actually is. Even though only a comparatively modest 1200 audience members can be seated here, it still very much feels like a great hall. And it sounds the part as well, as you can notice after a mere handful of notes. This hall copes effortlessly with even great volumes, always remaining transparent, but without ever displaying that unpleasantly clinical quality found in Toyota’s later work in Hamburg. Unlike most modern halls, it also sound very similar on most of the seats. Of course, the different perspective towards the orchestra becomes apparent, though this remains pure information, never turning to judgment. Toyota has really nailed the fine balance between transparency and warmth here – magnificent! And at the same time a shame that recording are only ever made here for the orchestra’s archive use.

If other recordings were made here, the quality would surely be excellent, as you can hear and judge yourself and your colleagues on the stage fantastically well here. Also, as if by chance, the light wood tones and mild colors make for very pleasant lighting that even after long sessions never becomes fatiguing.

It’s a pleasure to be here on other accounts as well, as even though the immediate neighborhood is rather bland being taken up solely by residential buildings, a taxi ride to the wilder quarters around The Bund (that’s the wide riverside promenade along the Huangpo) takes a mere 15 minutes and also typically turns out quite adventurous!

Official recording on physical media are sadly barely available at all. However, you can get a good impression of the Shanghai Symphony Orchestra in its hall on the SSO’s YouTube channel.