The Golden Hall at the Musikverein in Vienna

Professional musician Stefan Gawlick travels the world and knows almost every major concert hall around the globe. In this series, he reports on the acoustics and other characteristics of famous venues both in the auditorium and on stage. Up now: The Golden Hall in Vienna.

You probably already know the facts: Housed in the building belonging to the Gesellschaft der Musikfreunde in Wien, the Great Hall — better known as the Goldener Saal (Golden Hall) im Musikverein — was inaugurated in January 1870 in Vienna. It was designed and built in a style honoring paragons from antiquity and in a classic shoe box form as a rectangular, 50-meter long hall with seats facing head-on toward the stage.

Due to the numerous balconies, ledges, statues, friezes and stucco work, this hall is comprised almost purely of acoustic diffusion elements. The only absorbers in the light-flooded space are the maximum of 2,044 concert goers who, due to the room height of almost 18 meters, don’t really have much impact in the end: Whether full or empty, the hall reverberates for a good two seconds. Only the transients are a bit clearer when the hall is full; the distinct resonance the room also obtains through the hollow cavities under the stage and the thin ceiling panels only loosely laid on a beam construction is maintained. These simple facts do not, however, reveal much about the hall’s magic: This is something you can only understand once you’ve experienced it in person.

As I’m sure many of you are well acquainted with the Golden Hall from having sat in the audience at a performance, I’ll try to describe it from the other side: What’s it like to play on stage?

Concerts at the Musikverein usually get off to a somewhat tedious start: Entrances are not located at Karlsplatz, but rather in the tiny alleyways opposite. This is a real nightmare for delivery drivers and motorists as there are hardly any loading bays and practically no parking spaces. Inside the building, things don’t get any better: The elevators are cramped, the corridors winding, and the doors narrow. The stage side doors are actually so narrow that grand concert pianos have to be relieved of their legs and placed on their side just to be able to reach the stage at all. “Is there a stage elevator?” I hear you ask. Oh, please! To get to the stage from their dressing rooms below, musicians have to tackle long, steep staircases. And, as you might imagine, over the decades many a violin has not survived this arduous journey.

On the stage itself, you’ll find the seats are packed closely together even when the orchestra is quite small; and, if you are seated at the back, you can quite easily come into physical contact with the first row of the audience. It’s quite a strange feeling …

But, when you play the first note, you immediately forget about all that. The marvel that is the Musikverein is hard to explain, but I’ll try my best. When you use an instrument to produce sound, it’s part technique, part power. And the bigger the concert hall, the more you usually have to put into the instrument to fill the room. That’s not the case at the Musikverein, however. Things work very differently here: You get the feeling you only have to slightly initiate a sound with the instrument and the hall will “actively” draw it out further and carry it over long distances for a long time. When you play in this concert hall, you experience a lightness that lets you can create beautiful sounds without the need to exert yourself to any great extent. And that’s because everything here oscillates, resonates, and carries. Or, to put it another way, if you don’t mind me making an automotive comparison: If you were to compare the exertion of power and effort in other good concert halls, for example the KKL (Culture and Convention Centre) in Lucerne or the Berliner Philharmonie, with a “healthy” speed range and active driving style, you would, so to speak, be letting the engine idle in the Golden Hall. And you have to get used to that at first. 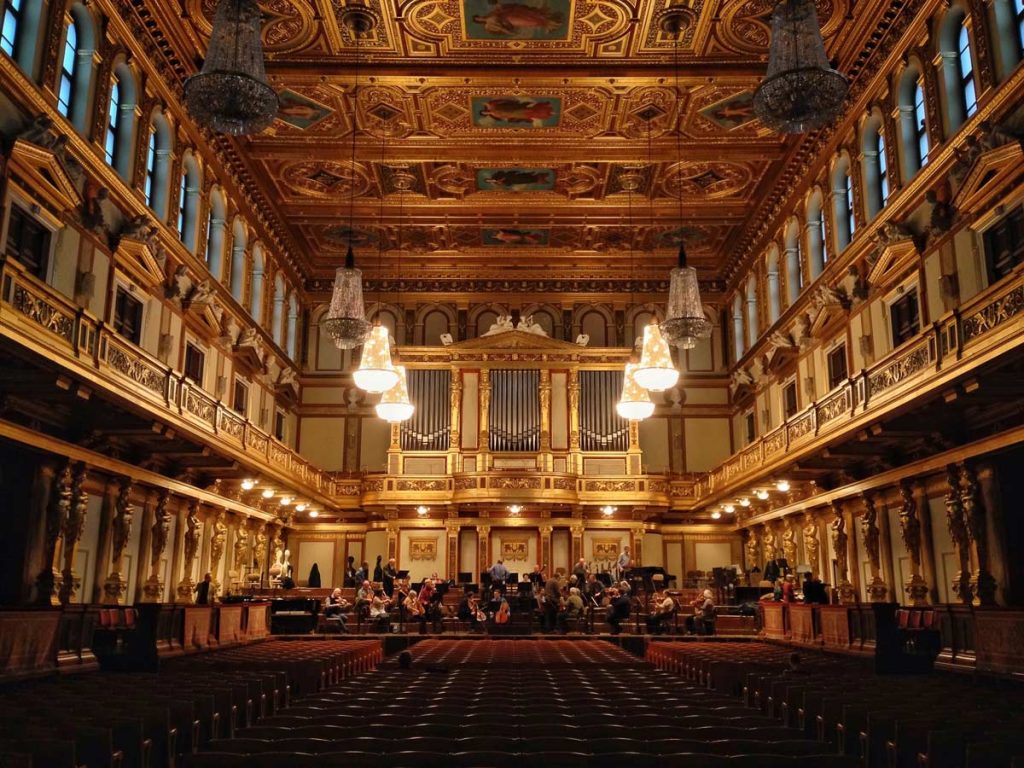 That’s why many guest orchestras sound strangely rough and angular here. Even the coordination is hard at first: On stage you can hear yourself extremely well, your immediate neighbor reasonably well, but other members of the orchestra farther away only very vaguely. You therefore have to quickly readjust your “antennae” to be able to properly work as one again.

As I round this out, here’s a little nugget of audiophile info for you: The golden female figures supporting the first balcony in the auditorium are all made from plaster, however the ones on the stage are made from thin metal that oscillates at a considerably high frequency when you tap it.