Professional musician Stefan Gawlick travels the world and knows almost every major concert hall around the globe. In this series, he reports on the acoustics and other characteristics of famous venues both in the auditorium and on stage. Up now: The Royal Albert Hall, London.

After many great and beautiful concert halls, we now move on to one beyond compare. The Royal Albert Hall has the size, sound, atmosphere, and tradition to make it a truly remarkable experience for any touring musician still to this day. Built in the late 1860s and ultimately opened in 1871, the Royal Albert Hall is part of a memorial Queen Victoria had built in dedication to her beloved husband Prince Albert of Saxe-Coburg and Gotha who died at a relatively young age. It has achieved international renown for the BBC Proms, a series of summer concerts held every year since 1941 and surely the most famous concert series anywhere in the world. 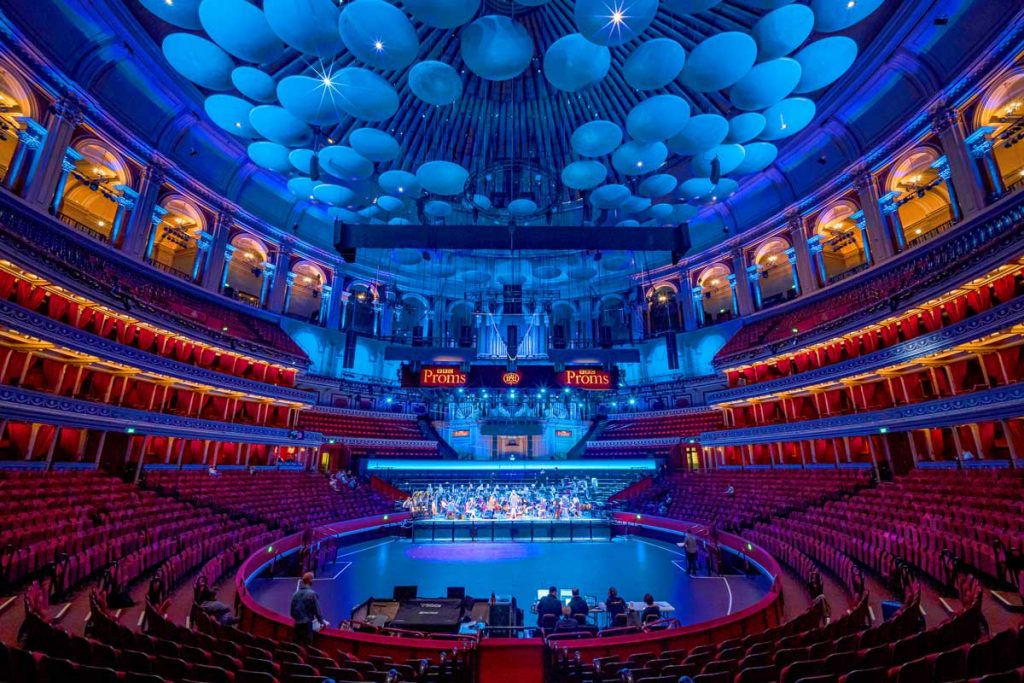 Located right in the heart of the city, the Royal Albert Hall is just a stone’s throw away from the two London Underground stations South Kensington and Knights­bridge. Anyone planning to visit London absolutely must take one of the various guided tours of the venue. The many cafés and boutiques dotting the area around South Kensington are also fun, though not for your wallet.

This concert hall holds a special place in musicians’ hearts for various reasons. First, it’s famous. If the Royal Albert Hall features on your tour schedule, you get the same feeling as with Carnegie Hall, the Musikverein or the Berliner Philharmonie. But in contrast to these other wonderful concert halls, a somewhat less serious atmosphere permeates the Royal Albert Hall. After all, this is not an established temple dedicated to the worship of classical music but a place of entertainment — in the best sense of the expression. Quality is a must, but the genre is less important as long as everyone has a great evening.

As a musician, you notice that the audience is simply more relaxed than when they’re seated in one of the bastions of classical music. And that’s a good thing; as here, on the stage, musicians are confronted with a very large audience: 7,000 seats and standing room for 2,500 people make the Royal Albert Hall the world’s largest concert hall for classical music. But admittedly if you’ve had a rehearsal in the afternoon when the majority of the dimly lit concert hall wasn’t visible, you do get quite a shock when you later go on stage for the concert itself. I haven’t come across any other concert hall that provides such an intense “arena feeling,” especially once you’re seated on stage with one of the famous London orchestras and you feel the electricity coursing through the audience even before the first note has been played. And then when the concert turns out to be really great the unsuspecting musicians are engulfed in an inferno that’s probably unparalleled anywhere in the world.

The sound. After all, sound is one of the main focal points of this series of articles. The sound in the Royal Albert Hall is, however, of secondary importance at best. On the stage you feel quite abandoned as you get the impression that every note is immediately swallowed by the depths of the concert hall. This leads to many musicians appearing there for the very first time play everything slightly too loudly. But that’s not really necessary at all as the domed hall works incredibly well. What’s also fascinating about the venue is that the sound comes across quite differently in many parts of the auditorium. But ultimately that isn’t that important. Not here anyway. Just listen to a few BBC broadcasts of the Proms and you’ll start to understand why this concert hall is so unique. And no summer in London is complete without the Proms.