Professional musician Stefan Gawlick travels the world and knows almost every major concert hall around the globe. In this series, he reports on the acoustics and other characteristics of famous venues both in the auditorium and on stage. Up now: The Royal Festival Hall in London.

One of the first ever major projects undertaken in London after World War II, the Royal Festival Hall actually became the city’s first listed post-war building. The hall is detested by many visitors and artists, but it’s impossible to imagine the London skyline without it. The foundation stone was laid in 1949, and the building was refurbished and modernized in the 1960s and again in the 2000s. It enjoys a prominent setting on London’s south bank of the river Thames next to the UK’s busiest train station, Waterloo, and only a stone’s throw away from the Houses of Parliament. This exceptional location has made the 2,500-seat monster an integral part of London’s vibrant culture scene. In fact, it occupies an even more prominent position in that scene than the Barbican Centre, which actually features far better acoustics.

To reach the hall itself, visitors stroll across the promenade with views over the Thames and enter various glass foyers. This area fronting the Royal Festival Hall’s actual concert hall is open nearly all day and plays host to an incredibly rich program of talks, arts and crafts, children’s events, and the like. Countless restaurants in the area cater to everyone’s tastes. This concert hall really exists right in the heart of the city. 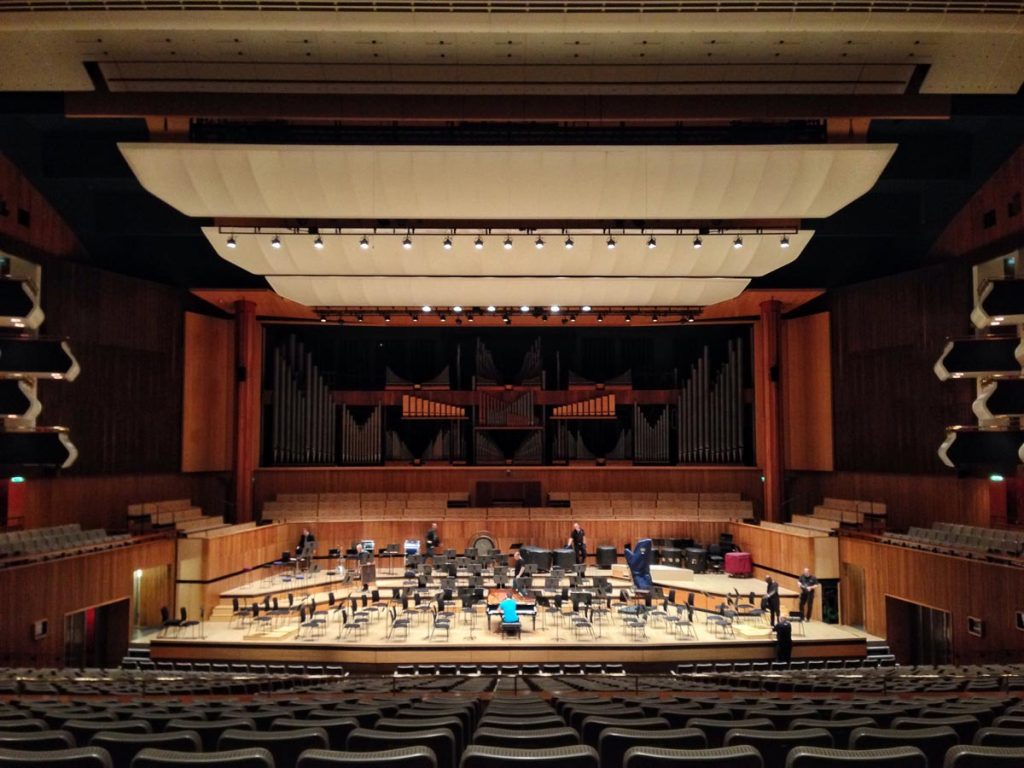 The musicians enter from the other side. When they exit Waterloo Station, performers reach the stage entrance on the side opposite the Thames and take particular pleasure in being there on a Friday or national holiday. After all, that’s when one of London’s best street-food markets opens up shop behind the hall, giving performers a chance to avoid the hall’s awful cafeteria.

The dressing rooms behind the stage are narrow, windowless, and full of nooks and crannies. The first few times you perform here you have to factor in a little extra time as you’re sure to get lost more than once.

After you’ve finally found the stage, you feel very small very quickly: It’s not often you tread the floor of such a vast performance platform. Any orchestra could fit on this stage, which measures more than 17 meters wide and 10 meters deep. Even our huge group of 10 (!) double basses and a corresponding number of higher-pitched string instruments had plenty of room.

The acoustics take some getting used to, however. Even with sound at the heart of the last round of reconstruction work, the acoustics couldn’t really be “rescued.” This hall conjoins different voices beautifully, yet at the same time it’s almost impossible to “fill” it. No matter how loud you play on the stage, listeners in the 14th row experience a neat poco forte at best. That, of course, impacts the choice of instruments and style of play — everything is given a little more oomph. Unfortunately, soft tones transmit incredibly well, which reduces the dynamics bandwidth a little and really demands everything of the musicians if they still want to achieve a broad spectrum. You can hear yourself and your colleagues extremely well on stage. This makes things a little easier and is also a reason why so many recordings are made here.

There’s also one more thing that makes the Royal Festival Hall truly special: Whenever you step on stage at the beginning of a concert, you can’t help but automatically glance up at the Royal Box at the back left (from the musicians’ view). It’s impossible to explain exactly why, but you play a little “differently”, if the light’s on up there.