Warwick Acoustics – formerly known as Sonoma Acoustics – has launched its very first product ever, the electrostatic M1. With it, the company aims to set a new benchmark in terms of signal fidelity. When put to the test, this high-quality headphone system will have to prove it’s a faithful servant for audiophiles in search of musical truth. 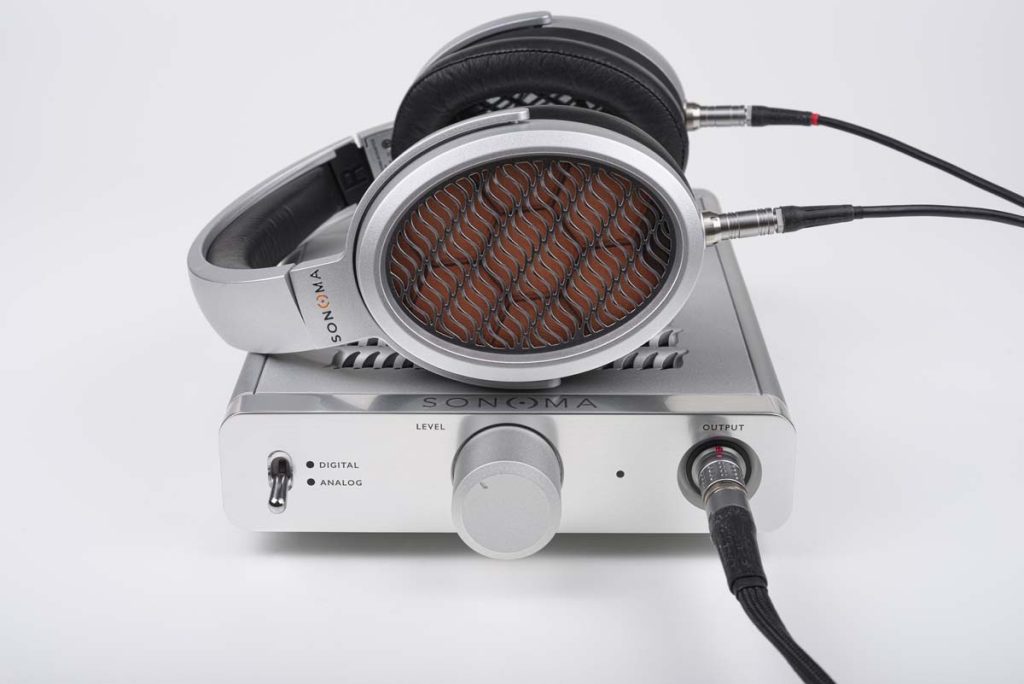 Headquartered in Warwickshire, in the UK, Warwick Acoustics is pursuing a very ambitious goal with its only product released to date, the Sonoma electrostatic headphone system: The company aims to thrill even extremely sensitive high-end fans who are addicted to all things hi-res, and it intends to do so by delivering sound quality so impressive it’ll make these folks’ bat ears prick up. The name “Sonoma Acoustics” was a shrewd choice. After all, the Sonoma Workstation, the only professional DSD recording and editing system for SACD production on the professional audio scene, caught everyone’s attention back in the day. The mastermind behind the Sonoma headphone system from Warwick Acoustics, Dan Anagnos, sought advice from the Sonoma workstation developers at the Super Audio Center in Colorado for designing and fine-tuning the Sonoma headphone system and got their blessing to use the name. Although this is not a product from SAC (Super Audio Center, which owns the Sonoma Workstation), the expertise of SAC’s skilled team certainly contributed to the development of Warwick Acoustics’ first-ever product to hit the market. The fine-sounding name is therefore anything but an audacious marketing gimmick. The Sonoma headphone system was developed by Warwick Acoustics Ltd. They came up with the concept behind the Sonoma system, which consists of the headphones (based on the electrostatic design principle) and the dedicated amplifier. Unlike, for example, the electrostatic forerunners from Stax, this headphone unit can only be powered by its own amplifier, and for a good reason as we will soon see. Just to briefly touch on this point, the Sonoma system can be yours for a cool €5,700. Whether or not the system can be deemed a “good value for the money” will soon become apparent. 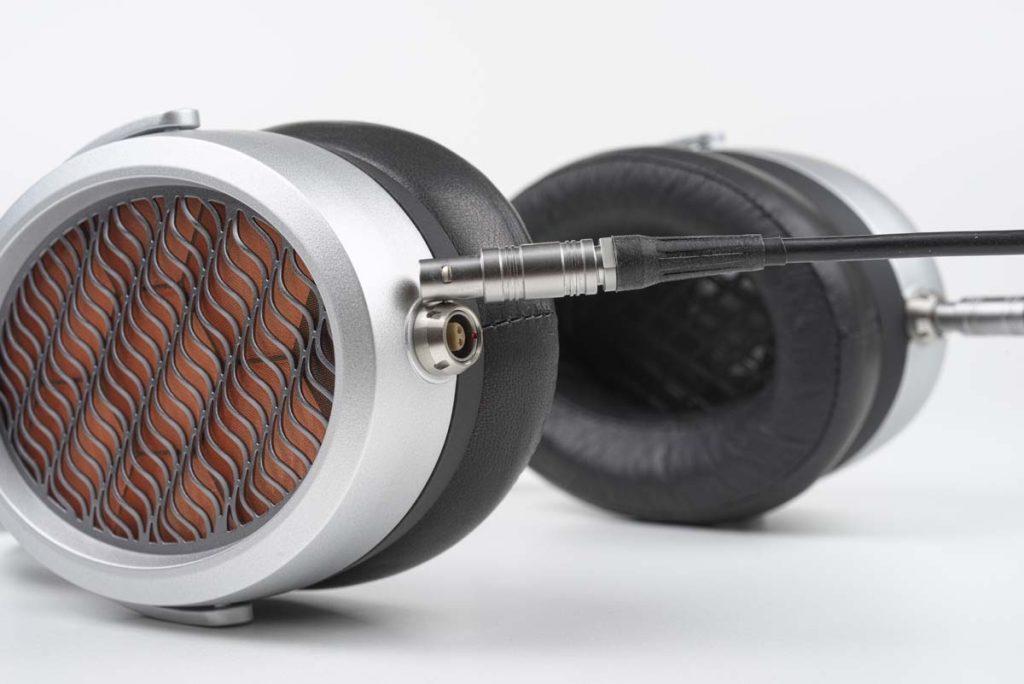 Let’s start with the headset: The HPEL (High-Precision Electrostatic Laminate) transducer is truly unique and revolutionizes the electrostatic design principle, which, for a long time, was thought to have reached its full potential. In addition to the diaphragm being made from a 15-micrometer ultrathin film that provides the perfect conditions for achieving exceptional impulse response, the HPEL transducer manages with just one stator grid. Unusual for electrostatic headphones, a single stainless-steel mesh grid forms the antipole to the diaphragm in the Sonoma system. This enables the sound to reach the listener’s ears directly and faithfully, the developers state. This would mean an initial step in the right direction has been taken in terms of signal fidelity.

This, however, constitutes merely a baby step as sacrificing a second stator and not using the symmetrical design approach, which has stood the test of time for good reason, can result in unwelcome distortion. For this reason, the music signal is preequalized in the system’s amplifier unit upfront. This action is handled purely digitally by means of a powerful DSP from XMOS that works with multicore computing power and is optimized for digital signal processing.

Of course, analog signals need to be digitalized beforehand. This job is carried out by high-quality AKM converters that work with a high resolution of 32 bit/384 kilohertz, high converter linearity, optimum dynamics and extremely low static. And while we’re at it, let’s mention the output side, too: the Sonoma headphone system uses two ESS Sabre Reference stereo DAC chips, each supplying one channel in mono mode in our Sonoma system.

Of course, an (analog) high-voltage amplifier is needed to drive the HPEL transducers. The manufacturer has gone all out here and has provided a discretely constructed FET amplifier that counterbalances the electrostatic converters’ inherently capacitive load: For this reason, the 1,350-volt bias and the music signal, which has an amplitude of 145 volts thanks to the high-performance Class A power amplifier, optimally match the HPEL diaphragms. An obligatory look at the inner workings of the amplifier unit reveals a sight for sore eyes: a very clean circuit board layout. This backs up the manufacturer’s claim that, during the design process, particular emphasis was placed on minimizing interfering signals. 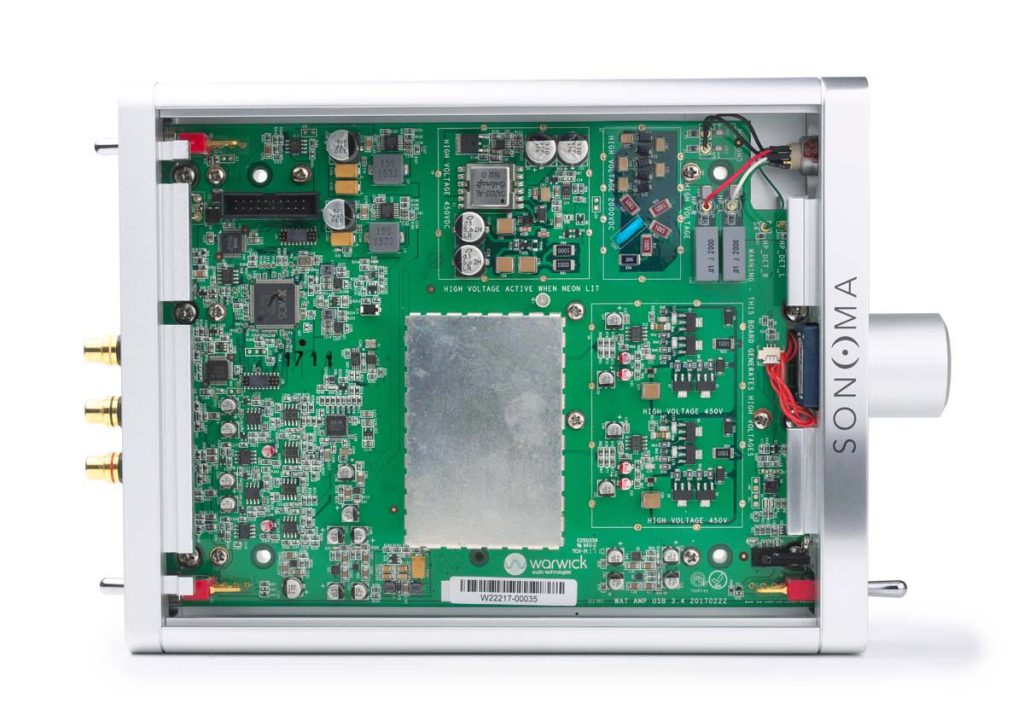 Warwick Acoustics wanted the Sonoma to be an exceptionally neutral-sounding head­set — that is, one with exceptional signal fidelity. Consequently, they tasked the DSP with linearizing the signals. The developers did not, however, lean toward a straight-line free-field frequency response, which, in their opinion, would have been unrealistic anyway. Instead, they opted for the definitive ideal setup in the form of an ultralinear loudspeaker playing in an acoustically optimized yet lively space. Achieving something like this using analog technology would have required a huge amount of effort. Digital technology makes this easier, more efficient, and, in the end, cheaper. Hardened analog enthusiasts will turn up their noses in indignation at such an idea, and I don’t mind admitting that though I’m also a digital fan, I also felt a little resentful myself. But I also reminded myself that digital photography, for example, uses software to correct the residual errors of modern high-performance lenses, and this results in incredible images — all without überexpensive components and time-consuming, high-cost detailed manufacturing. So, why not use the latest technology for the benefit of great sound quality? Exactly!

Despite digital equalization, the construction-related effort that went into the actual headset is significant: The diaphragm surfaces are, very noticeably, divided into eight honeycomb-shaped cells by the spacer made of Formex. The Sonoma developers did this to achieve a particularly beneficial resonance frequency. And the reason is clear: Instead of one single large resonance frequency, eight small resonance frequencies do the job. The overall average of these frequencies apparently only has a negligible effect on the frequency response. An extensive series of tests led to the different cell shapes and sizes and, according to the developers, the Sonoma’s film diaphragm can be optimally processed — that is, shaped.

The headset itself is equally impressive. The unpretentious spot color is a stylish silver-gray, and the material of choice for the driver housing and the striking protective grids over the diaphragms is lightweight yet resilient magnesium. The headband also shimmers in silver-gray, but it’s made from nylon; the internal steel band features a titanium coating. The headband pad and ear pads, made from top-grain sheepskin, definitely won’t please any vegans out there, but they do ensure a lovely snug fit on your head. Interestingly, the ear pads are hand-stitched in Germany, though, in contrast, the words “Assembled in China” are openly and honestly embossed on the amplifier. At this price, does it really need to be assembled in China? Presumably yes, as otherwise — taking a quick glance at rival products out there — Warwick Acoustics wouldn’t be able to sell the Sonoma system at this comparatively reasonable price.

While the headset does feel comfortable (I, that is, my head, could personally do with a little less contact pressure, however) because it weighs a mere 300 grams, the amplifier unit weighs in at a hefty 2.5+ kilos. The thick-walled housing made from solid, high-purity aluminum is sure to be partly to blame here. It consists of a U-shaped bottom section and a finger-thick aluminum cover panel with ventilation slots that match the protective mesh grids on the headphones. A stand-out on the mirror-finish, thick front panel is the centrally positioned fader that, pretty unsurprisingly, serves as a digital volume control. A cute toggle switch is available for selecting the input, and there’s a jack for the headset’s connector cable. Specialist Straight Wire provided the cable, which boasts low capacitance and features a self-latching connector and overall workmanship that inspires confidence. The USB cable, made by the same company and supplied as standard, boasts the same level of workmanship as well. The amplifier also works as a USB interface with a maximum resolution of 32 bit/384 kilohertz. This requires a special driver for Windows PCs (which can be downloaded here), however Mac users can simply plug and play. And that’s exactly what we did.

From strength to strength 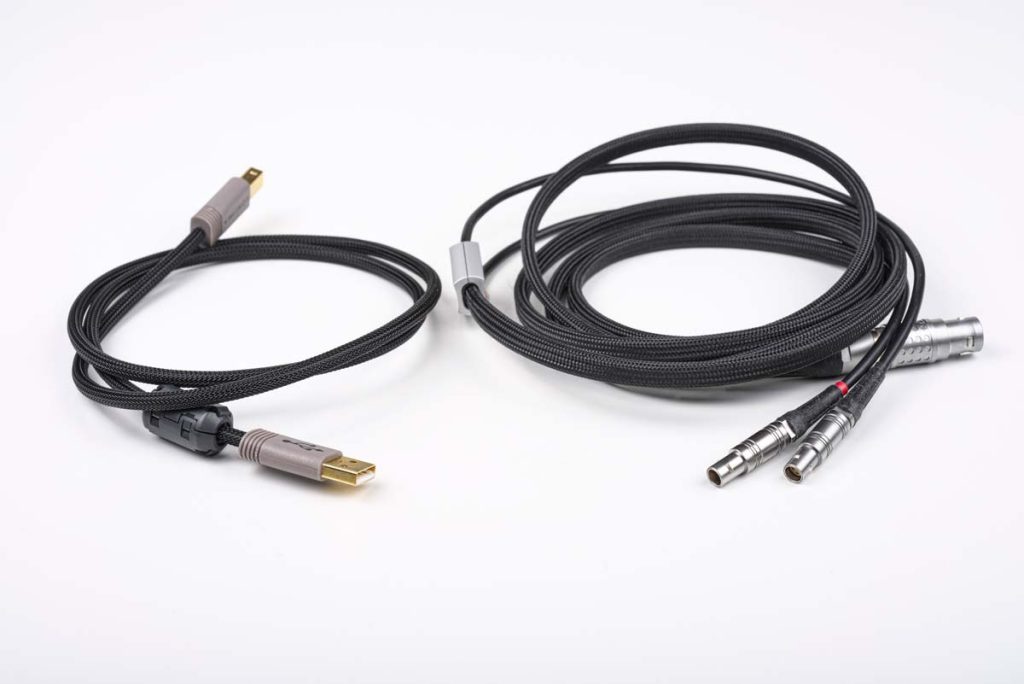 Admittedly, I had to accept one little fly in the ointment: The Sonoma interface doesn’t allow you to circumvent the internal jitter killer; it always generates its own clock by means of a clearly high-quality Crystek oscillator and TI/Burr-Brown chip. My benchmark interface, the Mutec MC-3+USB, initially supplied the Sonoma with digital signals, but it didn’t leave them untouched. Okay, yes — if everything with the sound is going swimmingly, then…

Armed with a standard HD edition (24 bit/192 kilohertz) of one of my favorite test pieces, “Yours Is No Disgrace” from the outstanding album Yes by the legendary British progressive rock band of the same name, the Sonoma system made it crystal clear that the sound quality was actually expansive. The opening lead-in chords, which always remind me a bit of the Bonanza theme song, sounded so precise and fully dynamic that I felt like my ears had broken out into a massive grin — and I really delighted in the ability to detect every little detail, and I mean, every little detail. Seldom has Steve Howe’s solo homage to Wes Montgomery sounded clearer, never has Chris Squire’s sublime Rickenbacker licks or Bill Bruford’s jazzy drumming had a richer tone, never have the vocal harmonies sounded more opulent, and never has Jon Anderson’s tenor voice reigned over the dense music with greater self-assurance. So I decided to say “Yes” to Yes and picked out the recently released 24-bit/192-kilohertz version of the classic Close To The Edge and fully immersed myself in the rich sound produced by the Sonoma system. 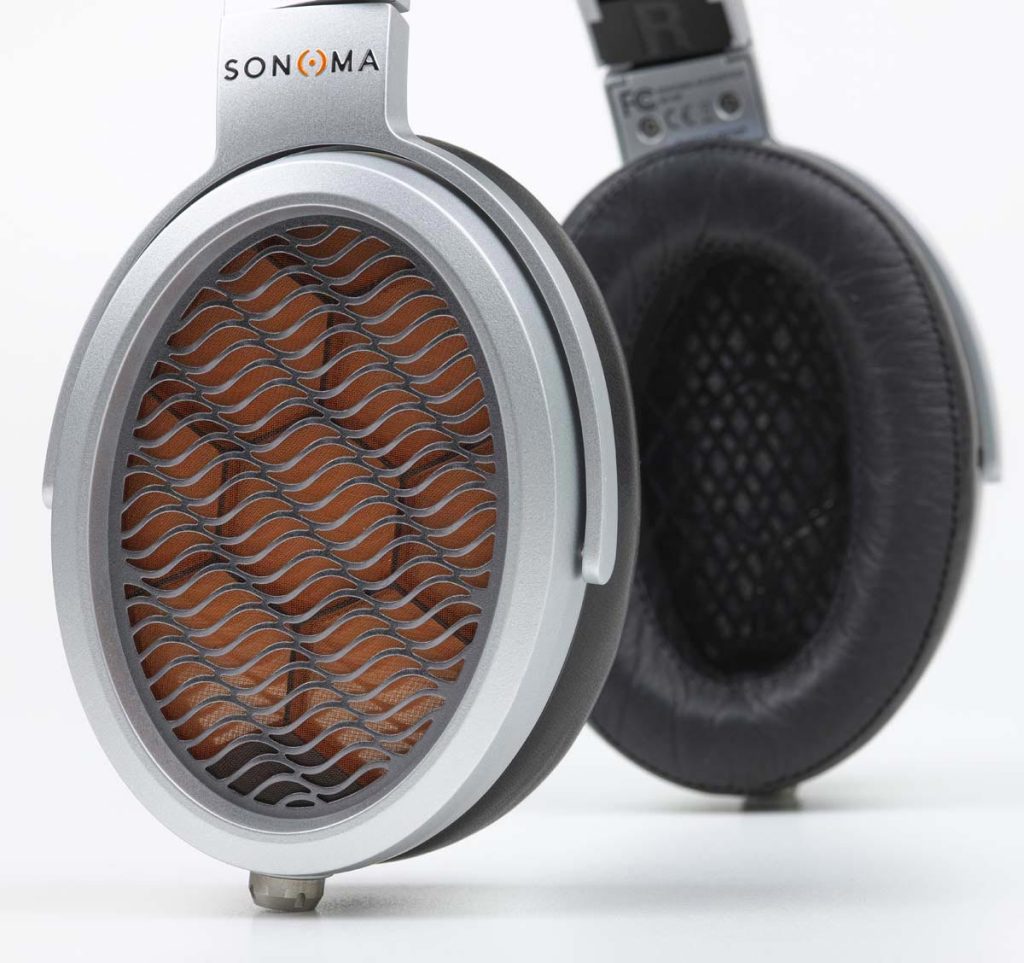 For the second time, the electrostatic system put its outstanding impulse response to good use, ensuring my ears picked out the transient attacks by the guitar and bass and the drummer’s characteristic rim shots. In addition, I noted extraordinary spatial representation — a phenomenon rarely achieved even by top-of-the-range headphones — and a bass remarkably deep for this type of headphones. The selectivity corresponds, in a figurative sense, to the modulation transfer of a Leica lens: All sound events are separated with exemplary precision; the Sonoma does not withhold anything and is, all in all, an outstanding servant for audiophiles in search of musical truth. This does, however, also mean that this system mercilessly lays bare any production weaknesses. The sound butler only gingerly picks up inherent audio-related youthful indiscretions and brings them to your ears’ attention with a contemptuously raised eyebrow. That’s the butler’s right though — fair enough. So it’s best to only listen to top productions and let the high-quality Sonoma bathe you in the sounds of Standards Vol. 1 by the Keith Jarrett Trio, Eric Johnson’s masterpiece Ah Via Musicom, and Frank Sinatra’s Come Dance With Me! (all in 24-bit/192-kilo­hertz resolution). Make no mistake: The Sonoma system is worth its price tag if you have a fetish for high musical fidelity delivered straight to your ears.

The Sonoma from Warwick Acoustics