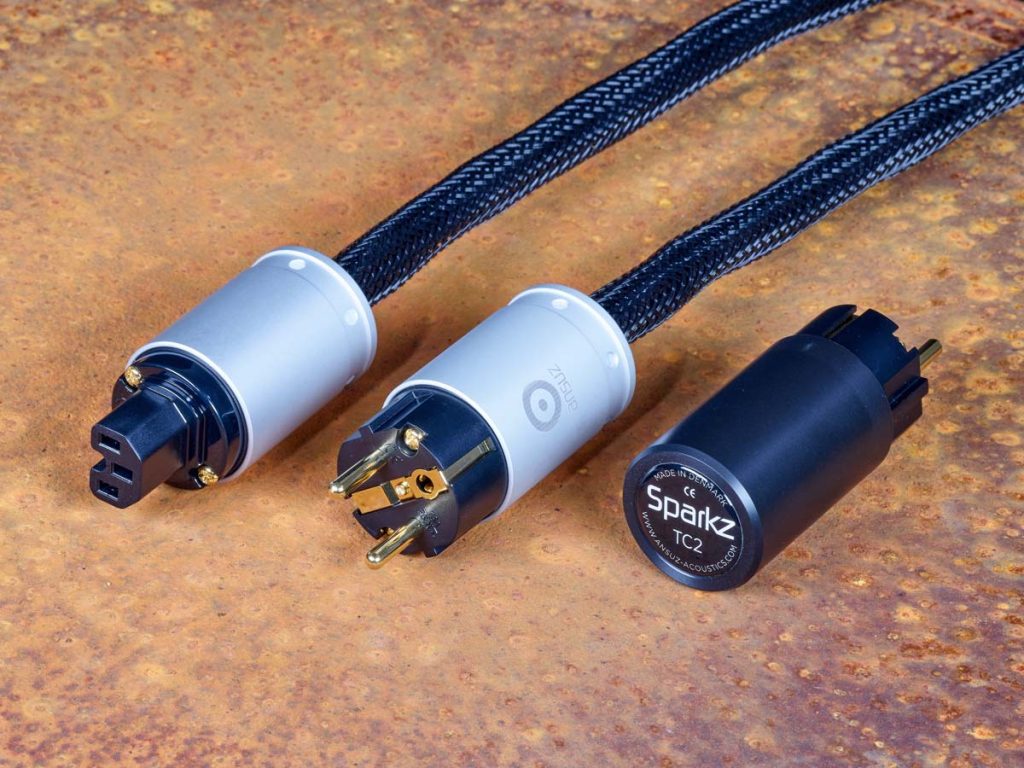 Accessories specialist Ansuz has an excellent reputation all around the world in the field of high-end power supply. In terms of the technology it deploys, the Danish manufac­turing company prefers not to follow the herd, instead forging its own path. Rather unusu­ally, the descriptions for its cables contain no information about the composition of the conductor material or any of the special met­allurgical processes involved. Nor are details regarding the mechanical construction any more forthcoming. However, the technology responsible for the great sound quality they achieve isn’t hidden from curious prying eyes by a hefty dose of casting compound, and for that the manufacturer gets a big thumbs-up. The sound-efficient plug-in modules called Ansuz Sparkz TC2, for example, let users have a good nose at what lies beneath their black plastic cover. There, curious audiophiles will find the beating heart of Ansuz technology: the “Tesla Coils.” These skillfully handcrafted wire wraps don’t fit the traditional description of a “Tesla Coil” you’d find in an online encyclopedia, namely that of a “resonant transformer for producing high-frequency alternating current voltage.” Rather, Ansuz masterminds Michael Børresen and Lars Kristensen have said they took inspiration from the great Nikola Tesla and came up with their own way of influencing mains power interference: the process they developed in-house generates vibrations and feeds them into the device powered with mains voltage. This is where Michael Børresen’s ex­pertise as an authority on all types of resonance and vibrations was really able to shine.

The plug-in Sparkz module and the A2 power cable are part of a whole range of Ansuz prod­ucts designed to optimize mains power supply. The Sparkz TC2 (“TC” stands for “Tesla Coil”) consists of a two-pin grounded “Schuko” plug, the contact pins of which are connected to a small circuit board which boasts a total of six Tesla Coils, as well as a small handful of other electronic components. When you insert it into an empty socket of your system power strip, or even directly into a wall socket, you shouldn’t expect any of the usual effects from the circuit­ry (whose operating principle can’t be identi­fied in any greater detail), such as suppression of direct current components or filtering of high-frequency interference. The manufacturer describes what happens instead as follows: “The suppression of interference in the Ansuz Sparkz is fundamentally different from the technology used in power conditioners in that it acts in parallel with the current flow and adds ‘counter-signals’ to any detected interference.” Why not use traditional filtering methods? “We are not prepared to accept the negative effects of elevated inductance (compression, reduced dynamics and reduced energy).” 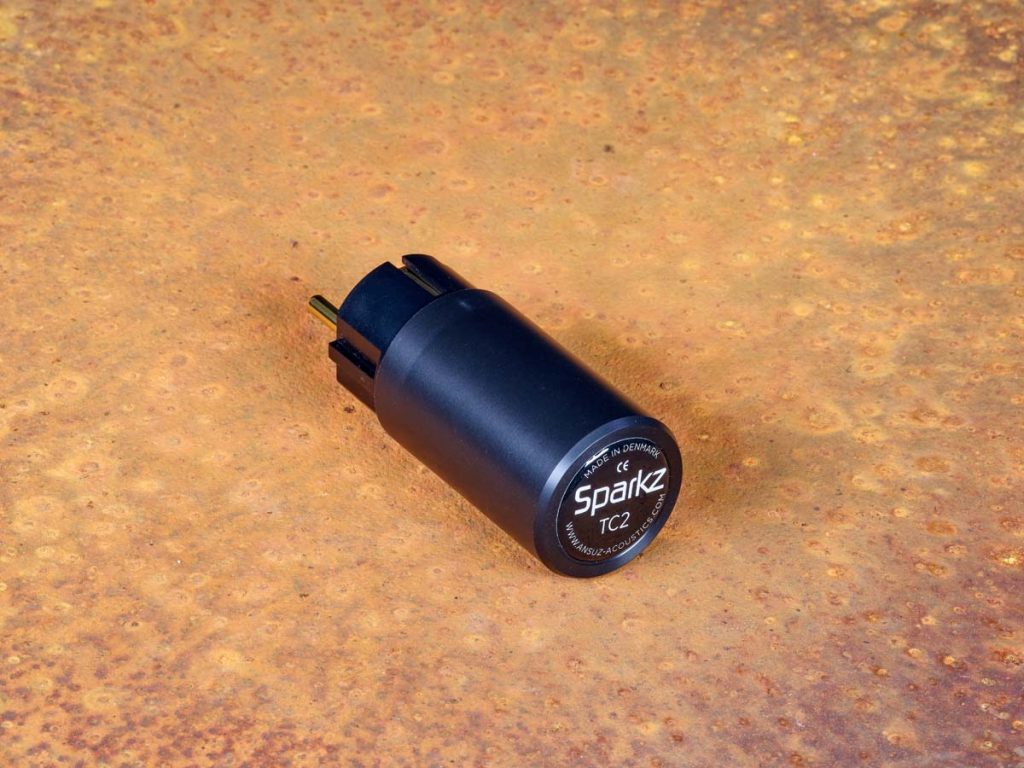 The entry-level power cable is part of the A2 cable series and features the kind of impressive physical properties and craftsmanship that you would expect from a cable manufacturer’s top-of-the-range products. There is no information available regarding conductor material, cross section or configuration. Instead, the focus is once again on proprietary technology, namely Direct Ground Connector (DGC) technology and Double Inverted Helix Coil (DIHC) technology. Ansuz cable specialist Lars Kristensen considers earthing/grounding to be hugely important. Here, the manufactur­er’s Mainz 8 power distributors (components featuring equally interesting technology which cannot be conclusively grouped either in the series of filtering power strips or in the category of power conditioners) also represent a logical progression of the company’s in-house techni­cal approaches.

So, did I see sparks fly with the Sparkz? I de­cided to listen to the Kind of Spain CD by the exceptional German drummer Wolfgang Haff­ner accompanied by a string of other talented jazz players. The track entitled “El Vito” starts with a trumpet intro by Sebastian Studnitzky via the right-hand channel, to which the guitar of Daniel Stelter responds via the left-hand channel. Only then does the band strike up with a funky, jazzy flamenco groove. When I inserted the Ansuz Sparkz TC2 into a free socket in my power strip (plastic housing, star cabling and no filters), I was initially confused because something was definitely happening but it wasn’t what I had expected at all – no larger space, no deeper bass, and no higher resolution. I plugged it in and pulled it out several times until it finally hit me: the three-dimensionality of the instruments was being traced as if with a precisely configured contour filter. With the Sparkz, the trumpet’s physical presence seemed less wide and more direct. The guitar sounded more concise and the musicians seemed more focused. I also noticed similar changes with piano recordings. Listening with the Tesla plug-in module, the pianist seemed to edge ever so slightly towards the front of his stool and in doing so played the keys more deliberately. The sound became a touch more precise. The Sparkz is an extremely interesting gadget which will no doubt be able to show off its qualities in terms of three-dimensionality and resolution to the fullest when used as part of an ambi­tiously configured system. The power cable, on the other hand, gives sound quality a serious, immediate boost. There’s no need to listen for a long time, reflect and make comparisons. The Ansuz A2 injects energy, a sense of presence and dynamics — even drama into the system. But I don’t want to give too much away. It’s a magnificent cable that makes a real statement. This may be a glowing recommendation but don’t just take my word for it — check it out for yourself! 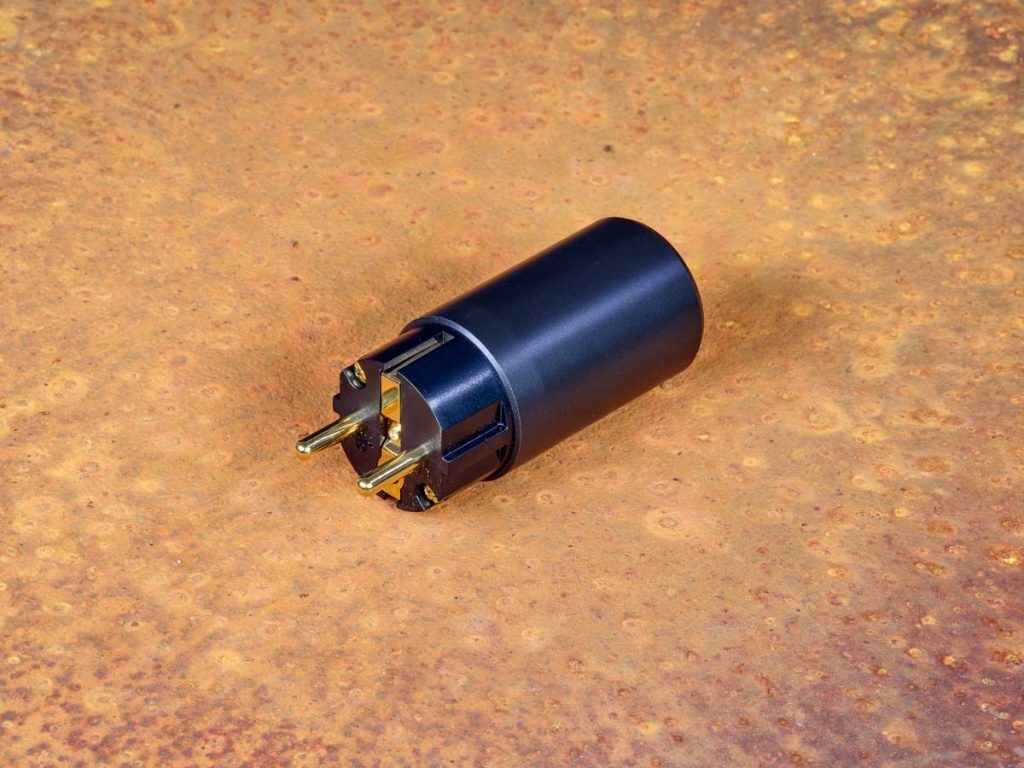