It's All About The Music!

The Audio Physic Cardeas captivates any listener with its unparalleled vigor and vibrancy. Built by Audio Physic — based in Brilon, Germany — this top-end model is one of those rare speakers that make the world around you disappear. But the Cardeas has many more tricks up its sleeves… Drifting away on a current of sound, without a worry in the world. This is when our instincts kick in, with no debates over whether it’s the right type of music. You’re a fan of classical music and jazz? Just pop it into the CD player. Or is Techno your genre for relaxation? Perfect! During your first session with a new speaker, let your feet guide you rather than your head. If you don’t have goosebumps or aren’t tapping along after the first few seconds, you need to start adjusting your set-up and checking your cables. But if you’re already resonating with the sound and giving yourself over to the groove, for hours on end, then you’re listening to a loudspeaker that’s akin to the Audio Physic Cardeas.

This new Audio Physic speaker system is one of those extraordinary yet straightforward products that immediately captivates its audience and completely dominates the senses. When the chest-high speaker was delivered to us on a sunny day in December, it felt like a block of ice. We quickly carried the Cardeas into the listening room and hooked it up to our Lyngdorf TDAI-3400 amplifier. Because we wanted to give the speaker time to acclimate, we didn’t fiddle too long with fine alignments. This clearly didn’t worry the Cardeas either — it sprang into action without a care in the world. The first piece of music, picked at random by the Roon server, was the “Fate” track from Boy Harsher’s Careful album. Grating bass and the laid-back charm of the 80s flooded the room. Vocal­ist Jae Matthews’ dark whisperings were tangible, and possessed a truly rare intensity. The clean and distinct timbre of the speakers also revealed numerous details of the mix. But what really knocked me out was the amazing reproduction depth, the profound gravity of the bass and the perfectly graduated, superbly detached stage projected by the speakers — that hadn’t even been properly positioned yet! 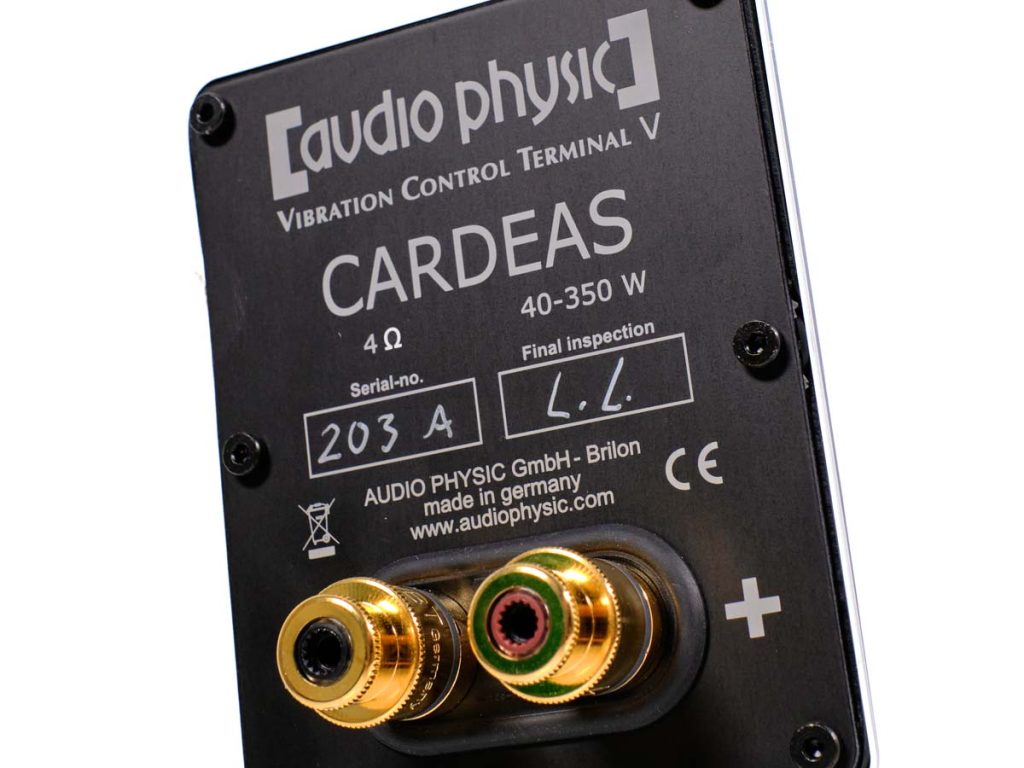 I can’t pretend that the incredible Cardeas took me completely by sur­prise. After all, I know what Audio Physic are capable of. Moreover, I had already briefly listened to the new Cardeas a couple of months before­hand. This was at the company’s headquarters in Brilon, in the very room where the new product was developed and finely tuned. The visit im­printed on me a lasting impression of the speaker’s incredible musicality and vividness. However, when compared with the sleek black and white structure present in FIDELITY’s listening room, the prototype I first saw was incomplete, lacking parts of its final housing. Nevertheless, it already projected that singular aura of a top-of-the line speaker.

If you’re familiar with products from Audio Physic, then you will know that this is the second one with the Cardeas name. And you’re probably won­dering why the new product wasn’t given a version number or “Mark II” designation. But I wouldn’t read too much into this name-sharing. Any similarities are confined to dimensions and status — the first Cardeas was also chest-high, and carried the same top-of-the range accolade. The new Cardeas has inherited everything else from the speaker that Audio Physic unveiled in 2016, called the “Structure”. Therefore, this new product redefines the “Cardeas class” rather than simply standing in as a “Cardeas II”. The Structure heralded a new era at Audio Physic that would cement Manfred Diestertich’s reputation as a materials researcher and uncompromising builder. But the redefined Cardeas hasn’t simply incorporated the Structure’s specifications, it has also refined them — and added deci­sive new elements in essential areas. The role model has had its day, and the Structure has since passed on the torch of innovation to the Cardeas. The designers have thrown many old conventions overboard with their new flagship. Instead of utilizing a single material, the enclosure is constructed with a multi-layer approach. Inside, this involves honeycomb lightweight polymer panels, coated on both sides with 3-mm multiplex sheets. On the outside, the cabinet is housed in large glass panels. These have been attached with special glue and lengths of climate-resilient adhesive tape, doubling as spacers. The housing maintains a single (bass reflex) opening between the front panel’s lower section and the body. The air-pocket between the housing and the glass reduces sound-travel through the housing, similar to double-glazing. Then, to hinder airflow, the housing openings have been sealed with ceramic foam. This amazing material is a silicon carbide. Nearly as hard as diamond, it is normally em­ployed by the metallurgical industry to separate molten steel from slag. In the Cardeas, it has a somewhat less demanding function. Not only does it control airflow at all housing openings, but also several panels have been installed as absorbers directly behind the drivers and elsewhere. Numer­ous internal struts stabilize the supporting frame and isolate volumes for the four drivers. These struts have been constructed using the honey­combs that contain multiplex plus additional ceramic foam features. The materials were chosen for the specific requirements at each location — and, in the end, for what sounded best.

The basic design clearly indicates that the box was built to provide the highest quality sound. With decades of experience behind them, Diester­tich and his team developed their solutions through an arduous trial and error process. The Audio Physic Cardeas was created in the listening room, not on the computer. During my visit to Brilon, I examined various artifacts that stand as testament to the many laborious years required. For example, Wolfgang Lücke, the company’s Managing Director, showed me a cup­board crammed full of various adhesives. These were all investigated in the team’s long search for the perfect sound, a drive that even included finding the best “sounding” adhesive for gluing together the individual components. All of these efforts coalesced to create a speaker housing that produces no characteristic sound of its own. Conversely, the damp­ing construction also ensures that the Cardeas withstands impact noise and other external influences. Other contributing factors on this front include the asymmetrically arranged drivers and the backward-sloping front panel, which help counteract runtime differences. The speakers stand on black aluminum outriggers terminated by screw-in VCF feet. Their powerful magnets, held by duct tape, enable the Cardeas to “float” above the floor. To further minimize vibrations, the outriggers are at­tached to the housing via neoprene dowels. Attention is paid to even the smallest detail! When I asked Manfred Diestertich (during a video conference) to choose the feature of the new flagship that he regards as the most remark­able, he immediately indicated the midrange driver. He worked many years to develop a chassis without a centering spider, and his efforts have finally paid off. The design centers on an anodized aluminum membrane held by an innovative surround. This membrane/surround unit stretches over an aluminum ring with a larger external diameter than the U-shape in the surround. The resulting pretension dampens membrane resonance and centers the entire driver unit of membrane, voice coil and surround, thereby eliminating any typical resonance, ringing and reverberations. In fact, this innovative driver was so impressive that it inspired the creation of a new top-of-the-range model. This is how the new Cardeas was born. The unique driver now lives in the best possible company. To transfer the outstanding midrange driver’s qualities to higher ranges, Audio Physic developed a novel aluminum tweeter also held in place by a surround. The Codex and Structure have more conventional 27-cm woofers. The dual 28-cm woofers in the base have never been utilized by Audio Physic before. These two ultra-flat drivers operate back-to-back based on the push-push principle: canceling each other out and delivering remarkably deep bass without unnecessarily vibrating the box. An additional mid-bass driver ensures clean transitions between the bass and mids. This means the Cardeas has two mid-woofers in its arsenal. Like the new woofers, they also operate without conventional spiders. A second rubber surround (called a “double surround”) prevents any potential wobbling.

In addition to the aforementioned ceramic foam, a further innovative material was developed: a copper foam that has been implemented as a signal conductor on the crossover. Carved into thicker layers, this material also features in the capacitors. It must be stated that Audio Physic is one of the few manufacturers that specifies and produces its own electronic components. The only components not originating in Brilon are Audio­Quest’s internal wiring and the excellent WBT single-wire terminals that utilize its new PlasmaProtect production technology. 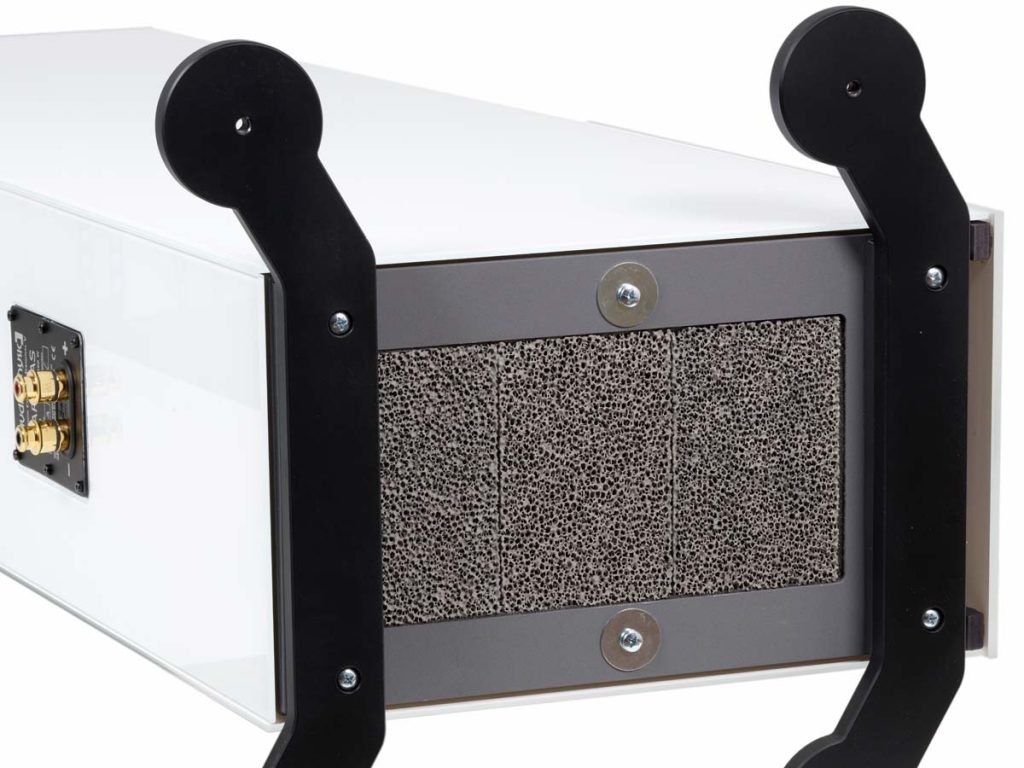 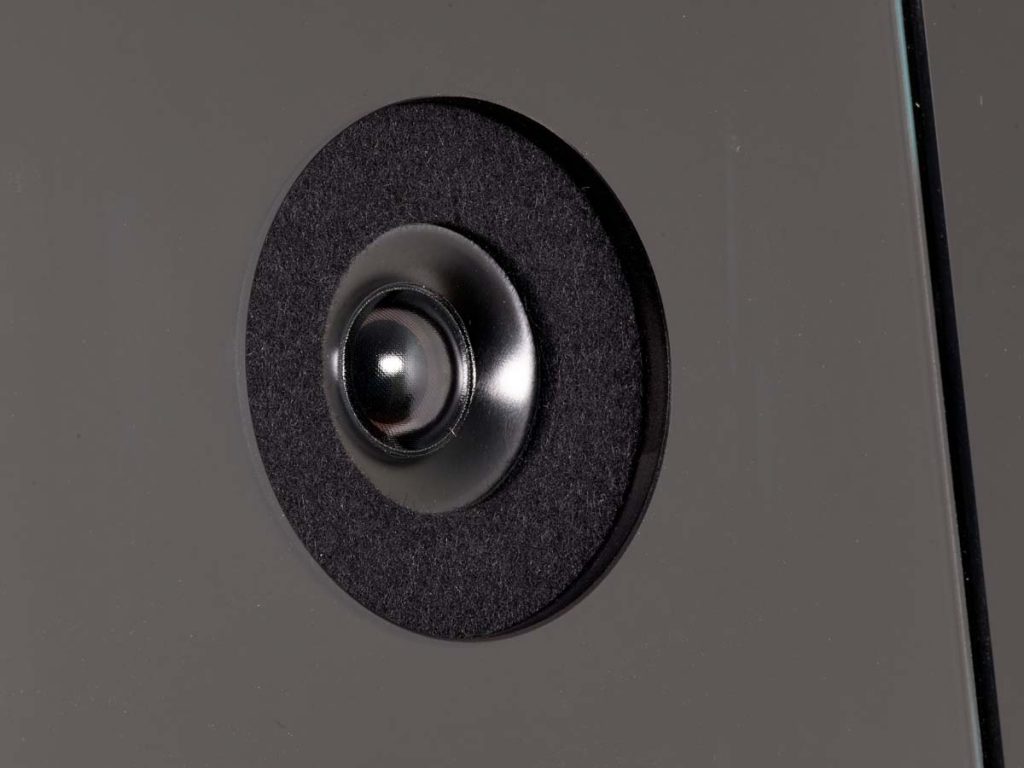 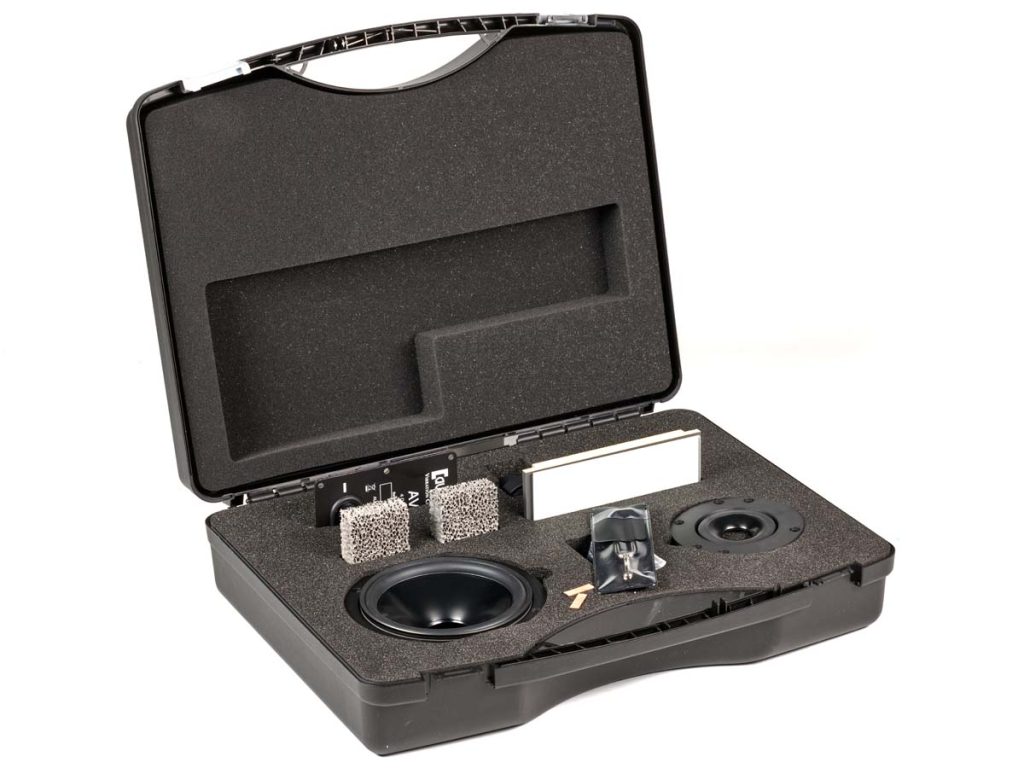 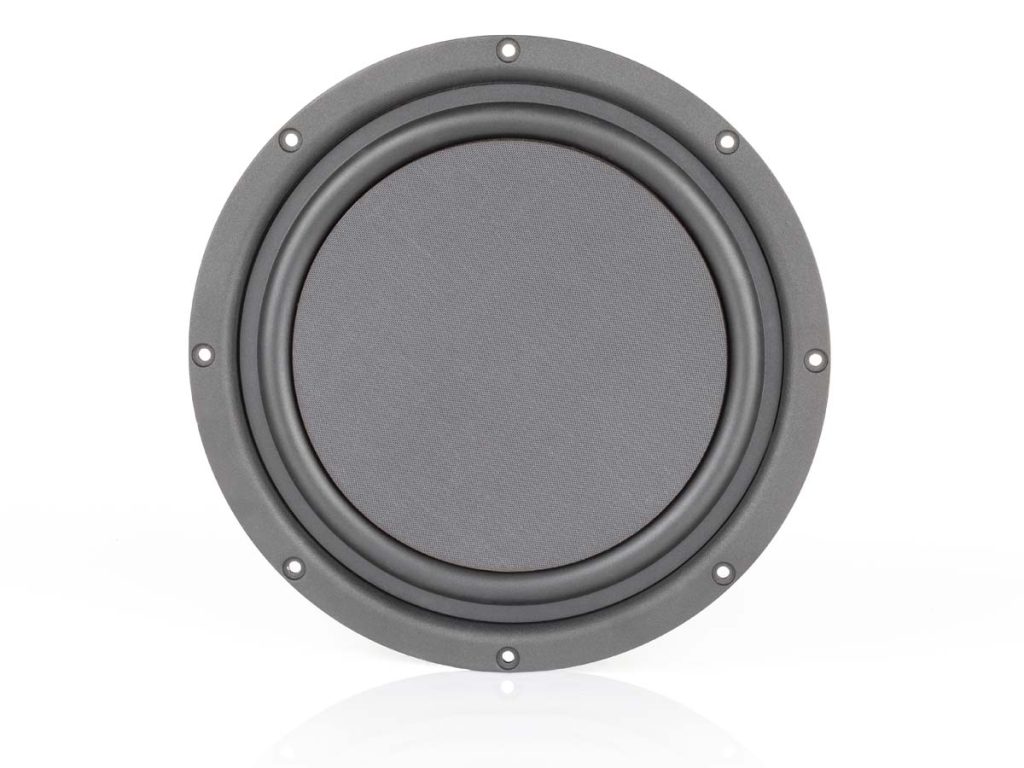 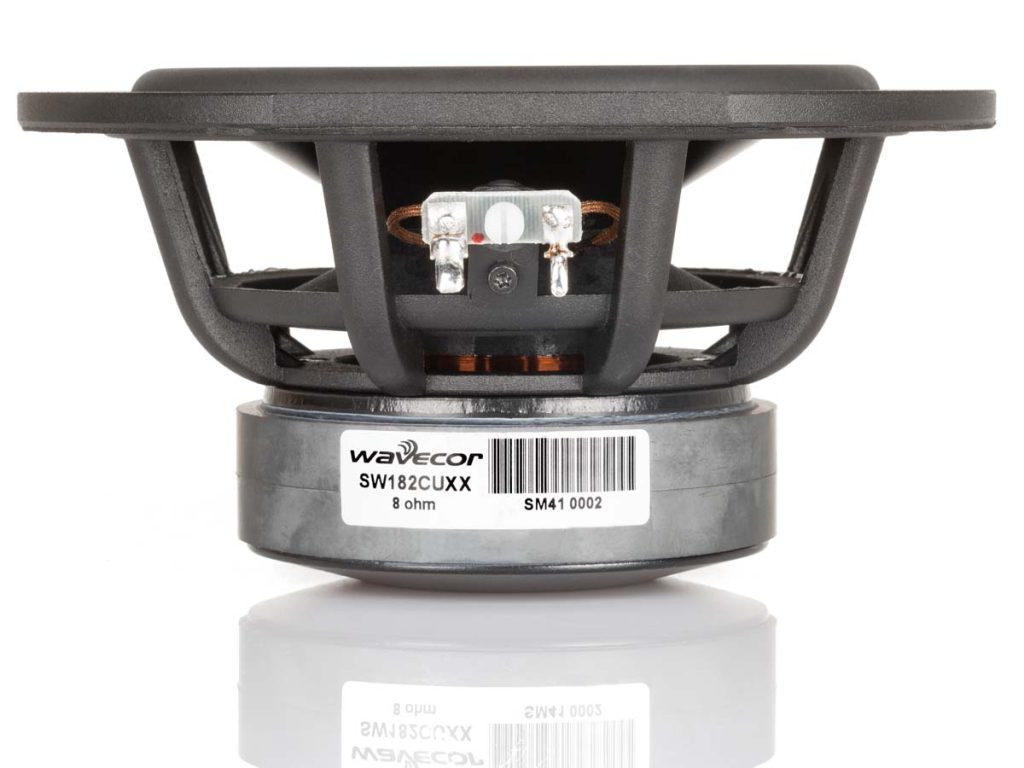 The Audio Physic Cardeas resides among those very few loudspeakers we have reviewed that have been so cleverly devised and lovingly implemented, or have made such a unique and palpable impression. What I find most astonishing is that a rigid “form follows function” approach brought forth an object of such timeless beauty: Cardeas also seems to have ideal proportions, due in part to an intelligent design that could be fitted into a relatively slim housing. The asymmetric driver arrangement is balanced by the front section’s delicate lines, and the white glass panels diminish the somewhat hefty silhouette. These exquisitely finished boxes will probably show their best face in rooms with a modern decor.

But all of this is supplemented by a sound that can scarcely be surpassed in terms of balance, breadth and clarity. Its spatial reproduction disperses even the largest orchestra magnificently across the stage, invites that in­timate “live club” atmosphere directly into the living room, and transports listeners to the floor of a dance hall filled with throbbing rhythms. The Cardeas produces bone-shaking bass effortlessly. And, with an efficiency approaching 90 decibels, it isn’t choosy of its amplifier partner. Further­more, the positioning need not be too finicky, as the excellent phase fidelity of its drivers ensures exceptional nuance and uncompromising musicality. The new Cardeas resounds as a wonderfully down-to-earth speaker, and it also stands to reason that competitors in this class will have a hard time generating rival products. This is the best box we’ve ever had from the folks in Brilon!