It's Solid Physics - Not a Fool's Paradise

You could take in-akustik for a mere illusion. Until you take a closer look. 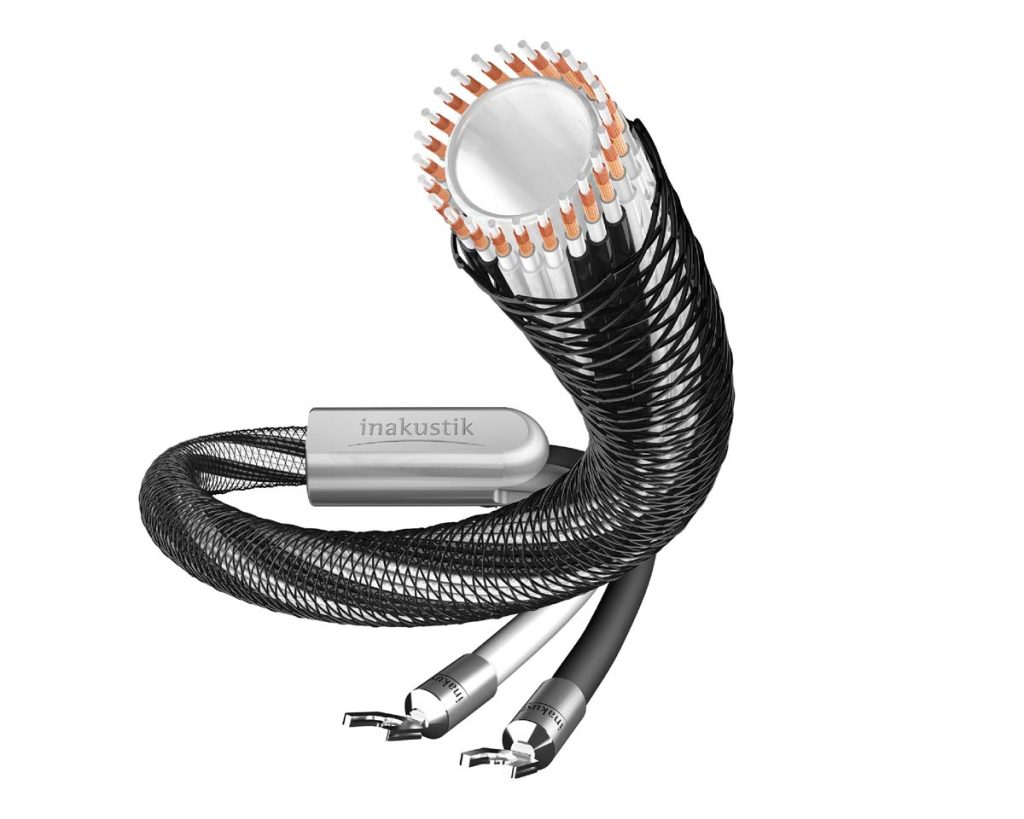 What do detailed model trains and elaborate high end equipment have in com­mon? At in-akustik, a great deal — because un­der the roof of the Württemberg-based Braun Group, a family company since 1948, they both exist — in absolutely captivating quality. The BRAWA brand has a legendary reputa­tion in model train circles: The company first began building model train accessories in the post-war years — everything from cable strands to lighting fixtures; they later entered into the model train car business with models from the absolute premium, large-series class; in doing so, they represented the pinnacle of what can be produced in a price range that can still be considered reasonable.

This is precisely what they have in common with the products from in-akustik, the compa­ny founded in 1977 by Ilse and Günther Sum­ser in Ballrechten-Dottingen near Freiburg — based on the realization by the two passionate music and hi-fi enthusiasts that the best quality music playback also requires superior device connections.

In-akustik has long been one of the top names in sound and image, for music and media. Particularly for NF, speaker and digital cable, in-akustik represents a globally positioned full-range supplier active in many business seg­ments, one which can provide useful solutions for every need and virtually every pocketbook. And in this connection, in-akustik points out that the “Made in Germany” label is not affixed to the reverse side for decorative reasons, but because it corresponds to the facts. 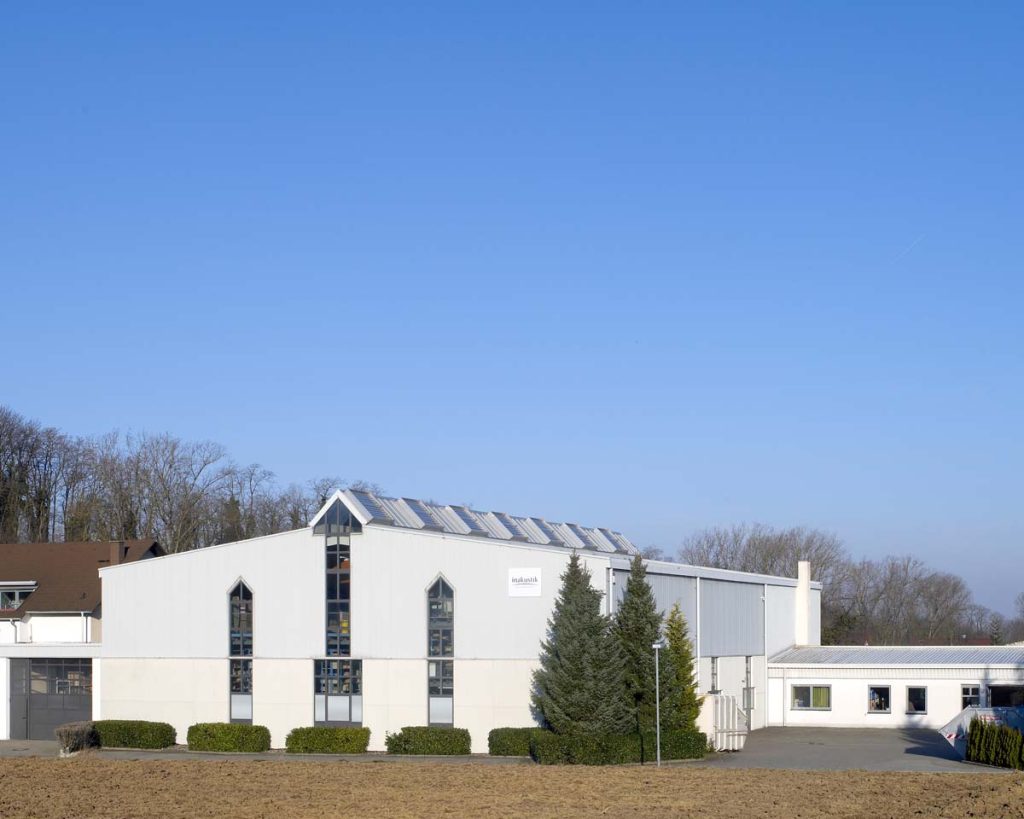 For their raw materials, in-akustik benefits from the expertise within the company group, the foundation having been laid by “Braunkabel”, the company that has produced cables for al­most every need since 1972. The company thus covers not only the recreational segment with products for play (model trains) and enter­tainment (device connections), it also supplies the sports segment, among others, with useful accessories. For instance, with special uniform cables for fencing that enable reliable electronic strike detection during matches.

Where audio and video applications are concerned, the cable experts at in-akustik see themselves as innovative problem solvers. The Breisgau firm’s portfolio also includes products that can’t be found for love or money anywhere else: For instance, one-of-a-kind audio cables with the name suffix “Air”, in which the ideal dielectric — air — is actually utilized. With in-akustik, it’s about the pure sound, razor-sharp video images and the feeling of doing everything the right way with the company’s cables — not least thanks to the carefully conceived technical solutions that are consistently based on solid physical know-how. One reason that users, including those and particularly those in the professional segment, rely on in-akustik products disproportionately often is that they are among the best in the market — not only for sound, but also in terms of mechanics. 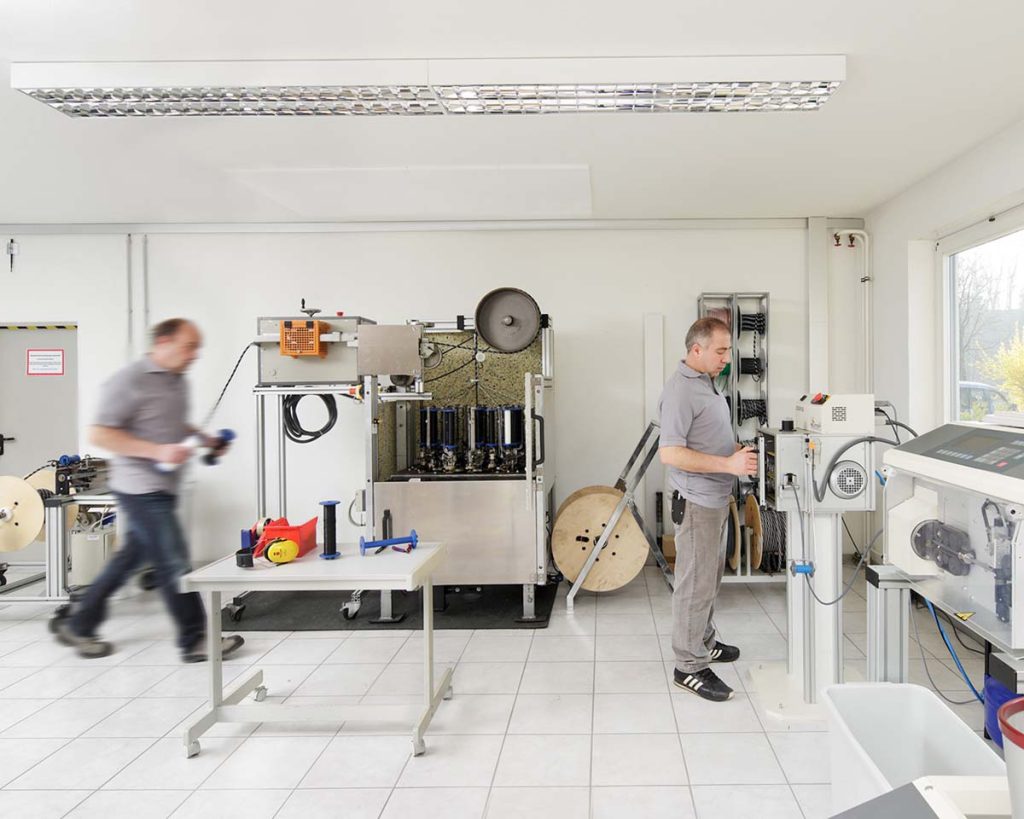 What head developer Holger Wachsmann (“hocus-pocus is not our thing”) dreams up is transformed into reality on machines, not few of which were designed and built in-house because the defined standards could not be executed on conventional industrial machines. Holger Wachsmann has occupied himself with hi-fi since he was twelve years old and had his personal “aha” moment in the late nineties, when a friend and colleague invited him to compare sounds with standard accessory kit cables versus higher-quality cables. Company co-founder Dieter Amann, who manages the business of in-akustik in close collaboration with Braunkabel head Günter Braun, empha­sizes the importance of consistent quality — ensured through meticulous final inspections — at the cable manufacturer, which has long-es­tablished worldwide networks. This seems all the more impressive given that the premium product lines at in-akustik involve countless hours of professional and technical craftsman­ship of maximum precision — as would be stereotypically expected from a company in the Black Forest, particularly a family business. Incidentally, the in-akustik family includes 35 employees with an average age of approx. 48 and who can count an average of 15 years of employment with the company.

A good example of the amount of work and development at play here are the cables with the company’s own “Referenz Air Technology”. These are all about low inductivity and high conductivity, the high art of (cable) braiding and the fact that air is still the best possible dielectric. But the way in which in-akustik approached the isolation problem and ulti­mately found an extremely satisfactory solution sounds like a technical mystery novel: In 1999, foamed PE in combination with PVC was used as an isolator for what was then sophis­ticated stranded cables. In 2004, Wachsmann and Co. left out the PVC; in 2011 the team devised the “PE tube” with a lot of air—and refined the concept further. The development of today’s top cables, such as the NF 4004 that was introduced in 2017, is yet more complex than earlier designs: Stranded cables made by a “Strickliesel” spool knitter (or rather, woven into a double helix much like our human DNA) are threaded by hand onto specially developed spacer clips and then again manually sized into various connection variants. Anyone observing this at times extremely intricate manufacturing process would also recognize that production capacity is limited — the premium cables from in-akustik could never become mass-produced products. 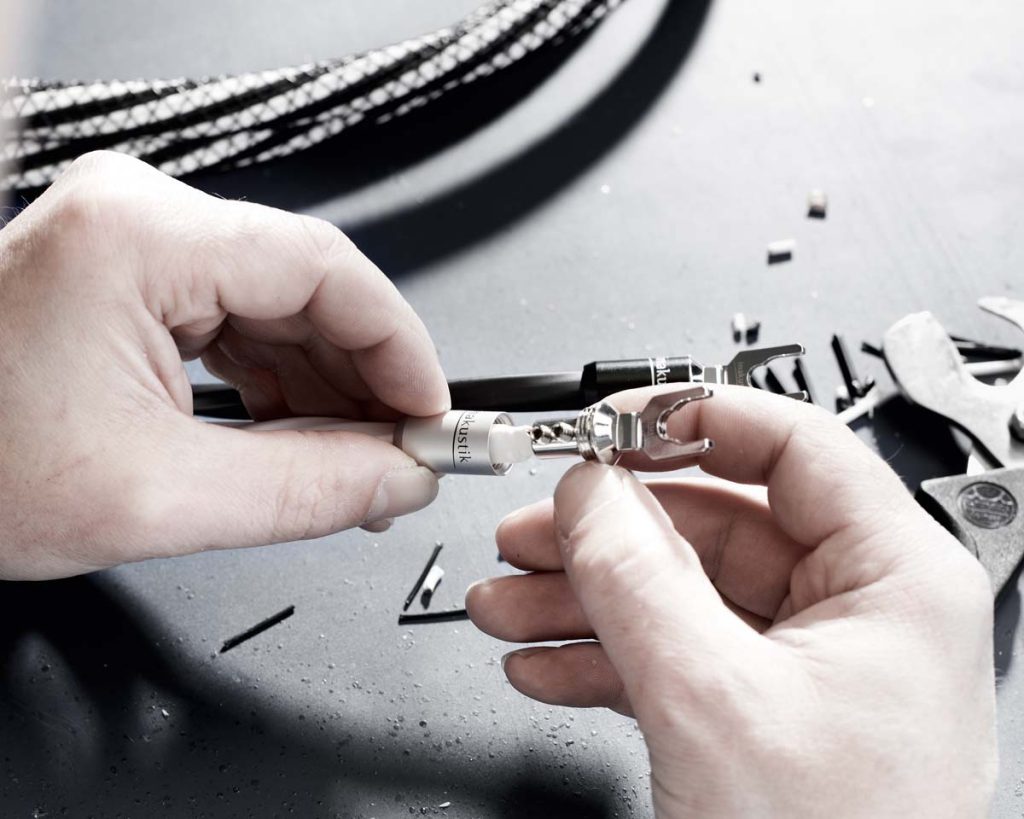 Incidentally, its suppliers also include the dis­abled workshop of Caritas in the neighboring town. Its social commitment to society’s most vulnerable is a perfect match for the company’s philosophy in which there is no place for loud cheering on one’s own account. Instead, atten­tion goes to the consistent development of new ideas that are intended to make life easier for both hi-fi enthusiasts and those who work with music professionally. For instance, in-akus­tik has banana plugs and cable lugs with an integrated joint, meaning that users will never have the problem of deciding between angled or straight connectors. Nor is the thorough Black Forest firm interested in participating in half-baked rush jobs: As was the case with the aforementioned 4004 Air, from the first ideas to the final products, a good one-and-a-half years can pass during which they are tinkered with, tested, thrown out, and then tinkered with and tested again, until the result is one-hundred percent. Test runs utilize the best hardware in the world, such as speakers from the premi­um Swiss maker Piega and electronics from Primare, whose creations are consequently sold by in-akustik in Germany as well. Reliable barometers for the quality of the cables being tested — if anything is lacking here, the sound converter used in the test is simply eliminated as a potential source of trouble.

Incidentally: Although the upper end of the cable series from in-akustik may at first glance resemble a boa constrictor the size of your fore­arm, these premium connectors are incredibly flexible and relatively lightweight. It is also grat­ifying that at in-akustik, the ratio between exceptional sound and reasonable pricing always stays in balance; even in the consumer segment, in-akustik offers a great deal of sound and tactile quality for the money — for instance, stable outer isolation with textile material that not only looks and feels good, but also makes the cable very resilient against outside influ­ences. The sensible Exzellenz series, which also includes outstanding digital cables, Made in Germany, and are still affordable, make for worry-free purchases. 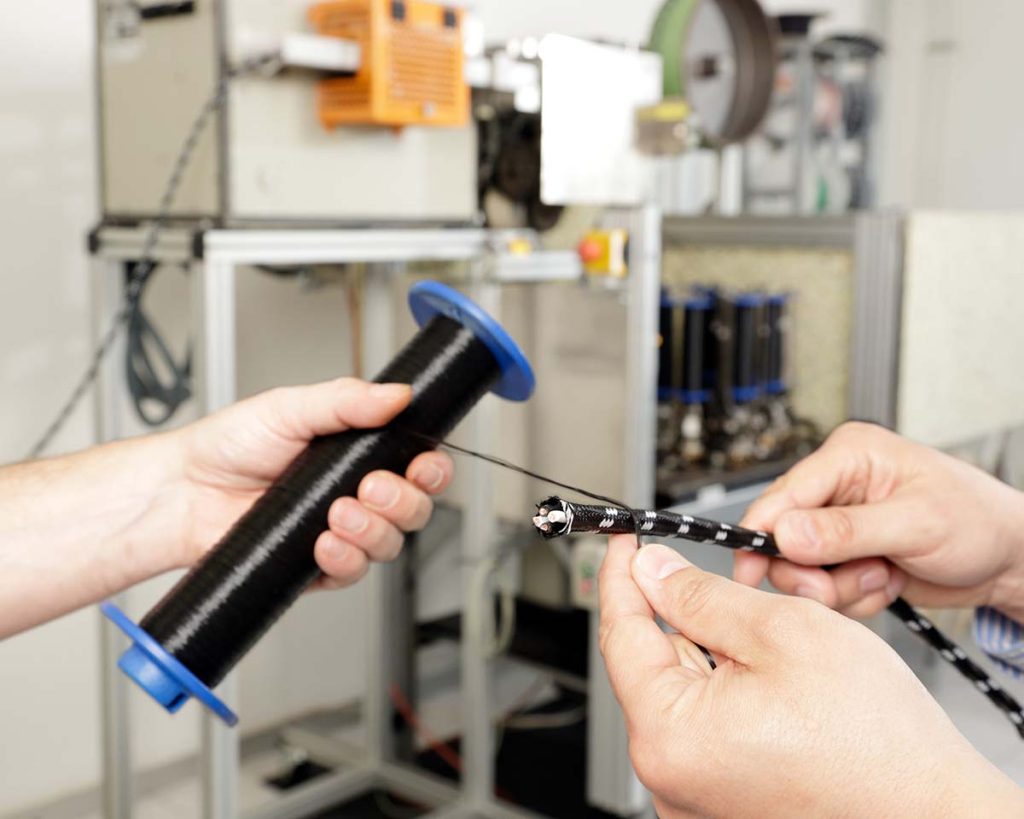 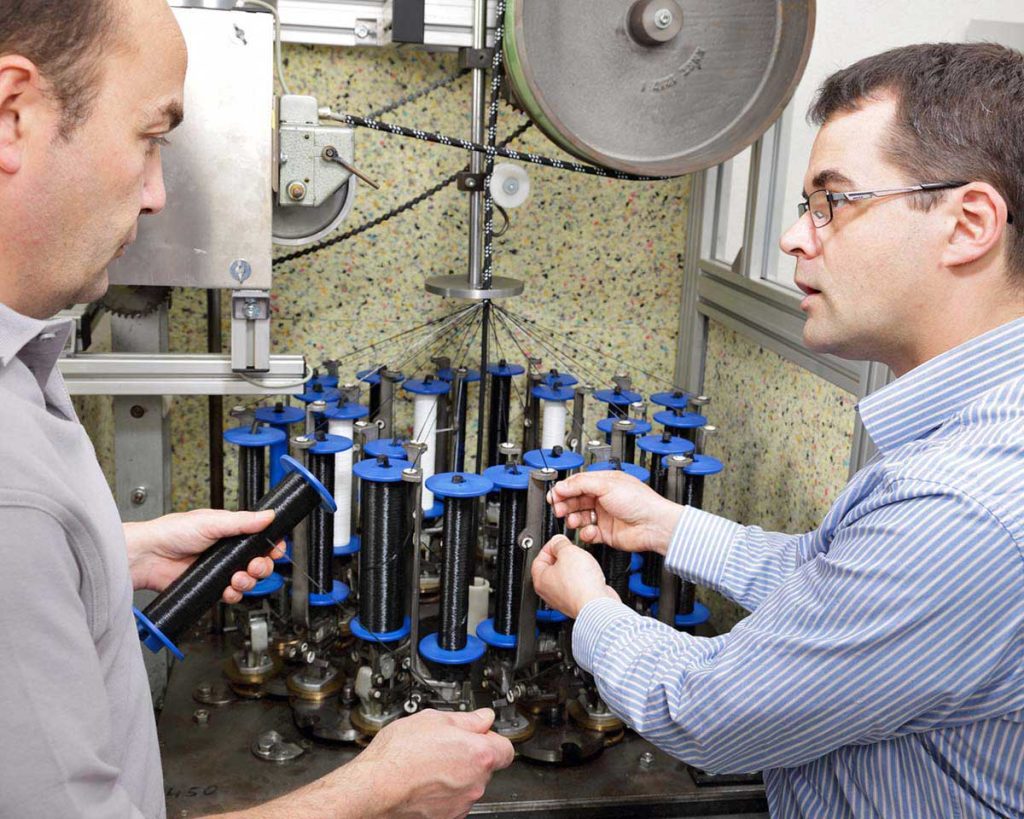 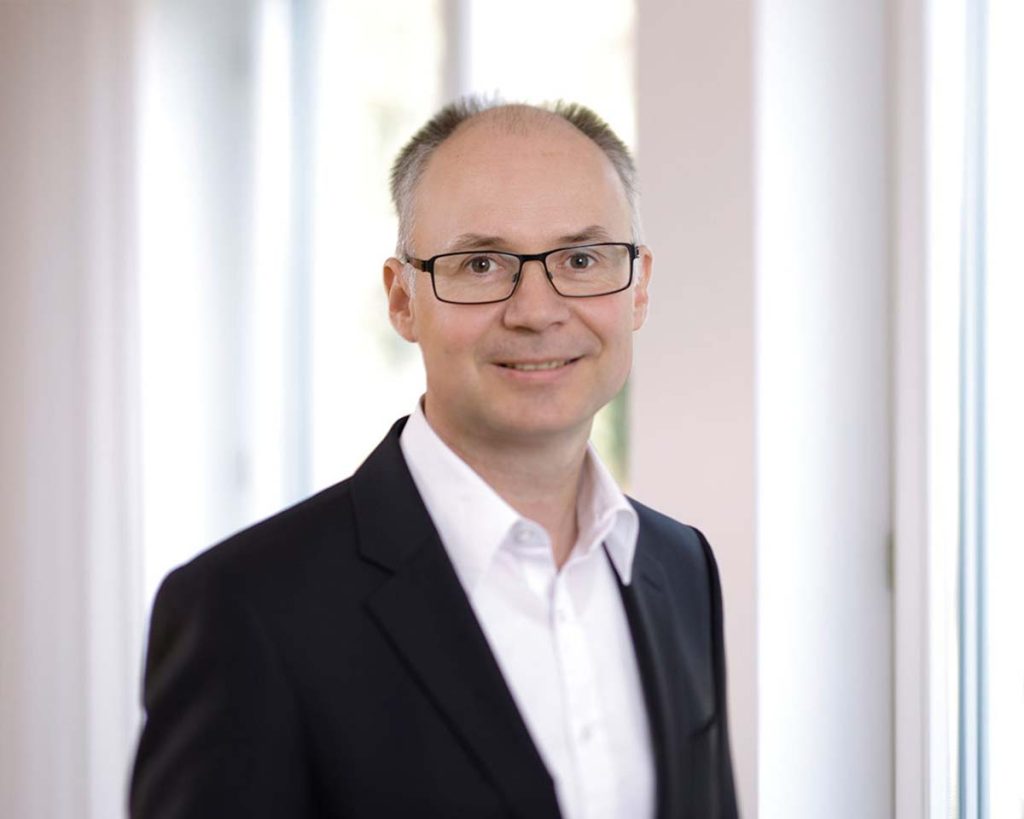 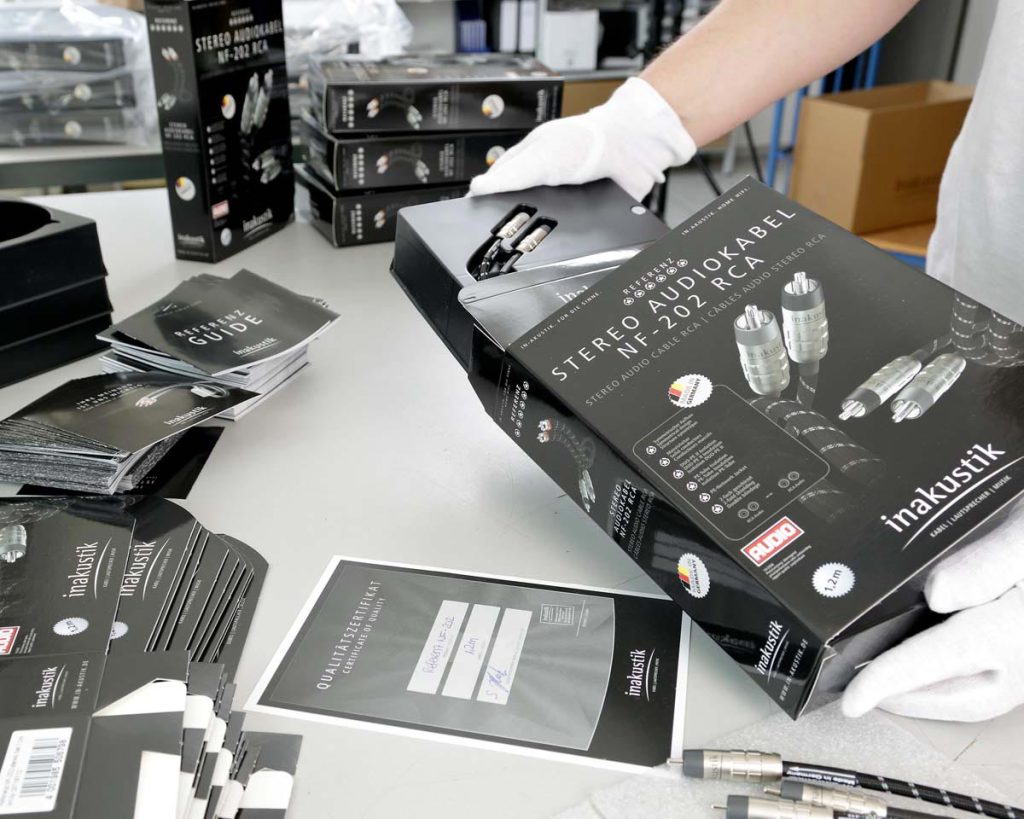 Because the best electronics and best device connectors are nothing without the appropriate software, in-akustik also offers music — from their own inakustik label (this time without the hyphen), or from one of the many record companies for which in-akustik does sales.

Illustrious names include Chesky Records, Ruf, Stockfisch and Telarc, just to name a few. The company also produces samplers and special editions on behalf of big names from the hi-fi and high-end audio segment. The common de­nominator is the audiophile recording quality that is quite naturally presumed. It is probably not necessary to point out that in-akustik equipment is used with disproportionate frequency in music studios. By the way, in-akustik is not only consistently on the search for record labels that match the active sales concept, they are also on the lookout for young bands and solo artists with potential to take under their wing and develop. The music division’s media store currently holds more than 5500 different titles, including recordings of greats such as American conductor Erich Kunzel with his Boston Pops Orchestra, folk singer Sara K. and German acoustic guitarist Friedemann Witecka.

Music that is known to create its own magic. And the only thing at in-akustik that can’t be explained by the laws of physics.

Volume up or down? A very quick interview with Dieter Amann where we wanted him to respond as fast as possible.

Volume up or down? – Up.
Analog or digital? – Digital.
Tube or transistor? – Transistor.
Vinyl or download? – Download.
Cross-country run or gym? – Cross-country run.
Trends or tradition? – Tradition.
Tea or coffee? – Tea.
Salad or steak? – Salad.
Wine or beer? – Wine.
Mountains or the sea? – The sea.
Book or screen? – Book.
Jazz club or opera house? – Jazz club.
Bach or Beatles? – Beatles.
Wagner or Wacken? – Wagner.
Stand-by or plug out? – Plug out.