Covering normally refers to songs being performed by other artists, but actual album covers attract their share of impersonators, too. The covered cover: Is it a witty reference, respectful homage or parody? Or is there a deeper meaning behind it? Up now: The bootleg look.

Coarse brownish packaging paper and a clumsy-looking skewed stamp are normally the kinds of things you’d expect to see on an express delivery parcel or on something improvised and unofficial, exuding a real sense that there’s something truly raw, genuine, and uncontrived inside. It’s no wonder then that this look became all the rage for illegally recorded and illegally released music recordings (referred to in the industry as “bootlegs”). This packaging tells us that what’s inside is the real deal. It’s dangerous and uncensored — with no proper cover, no marketing, and definitely no bells and whistles. This was, in any case, the message behind Bob Dylan’s album Great White Wonder and the Stones’ recording Live’r Than You’ll Ever Be.

Both live bootlegs were released with a similar look in 1969, precisely the time The Who’s band members realized that live performances were what they did best. After releasing the extravagantly artistic album Tommy, it was time for The Who to give their fans a raw and untamed live album. However, the band didn’t have the patience to listen through all the existing concert recordings and compile a final list for the album. The tapes from their recent US tour had even been ceremoniously burned in Pete Townshend’s garden. So instead, the band decided to stage two concerts in northern England specifically to produce the live album, one at the University of Leeds and the other at the City Hall in Kingston upon Hull. The concerts were performed on two consecutive days in February 1970. The second (as you might expect) was bolder and gutsier, but there were technical problems with the recording. For that reason, Live At Hull wasn’t released for another 42 years, after having been fixed with the help of some clever digital tricks. However, the vinyl of the hour was Live At Leeds, one of the greatest live albums in rock history. 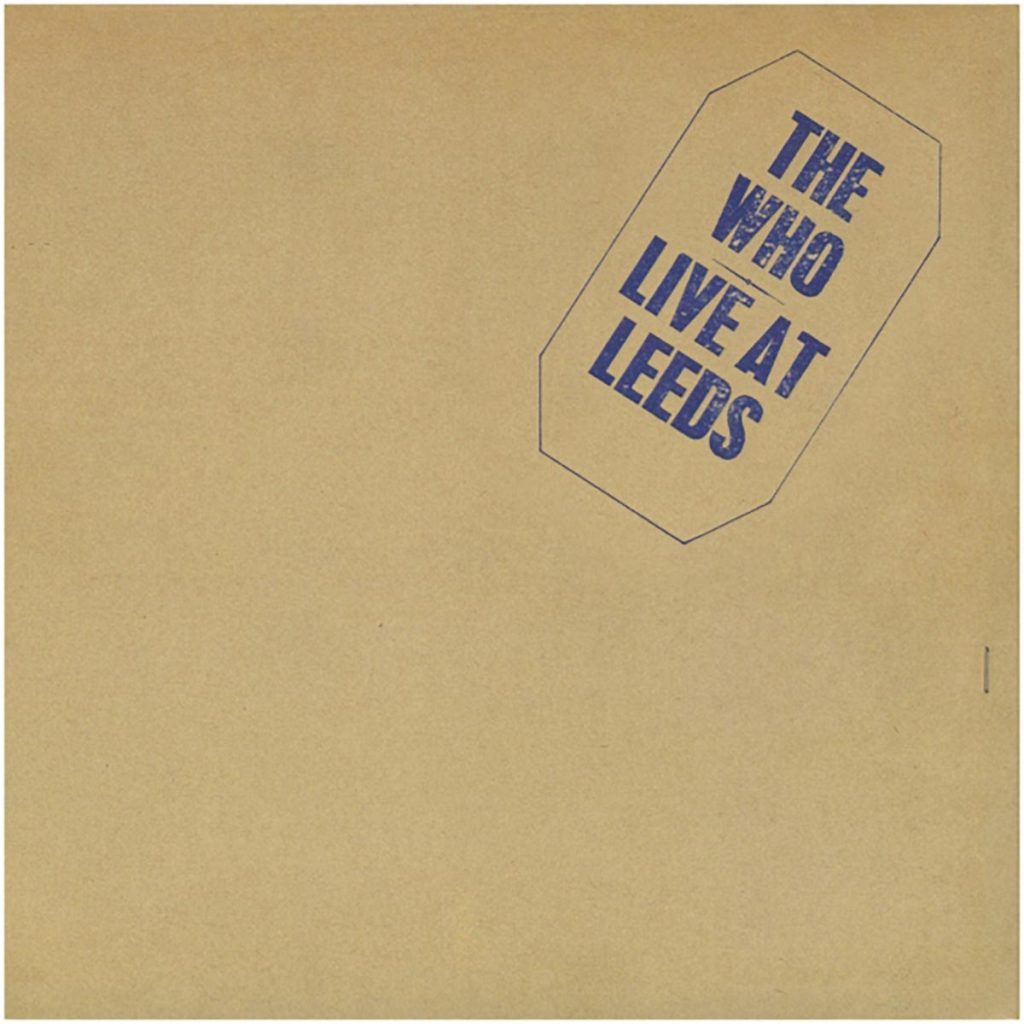 Although it was actually an official album from the band, it was given an authentic, pared-down bootleg look. This was a smart move by the record label — rather along the lines of “The Empire Strikes Back.” The first edition of the album looked like a creased cardboard cover, but inside was brimming with all manner of little surprises for fans, with inserts like posters, photos, and copies of documents from The Who’s everyday lives (letters, delivery notes, and contracts, etc.). Lucky fans back then were really living in the golden vinyl era. Even the vinyl’s center label was special: a handwritten template reportedly done by Pete Townshend himself. Intended to look like instructions stuck on a studio tape, the side of the label read: “Crackling noises o.k. Do NOT correct!” The bootleg look ultimately came with a bootleg sound as well — raw and unaltered. The uncompromising rocking music was totally worth all the effort that went into the packaging. On Live At Leeds, The Who bring white blues and rock ’n’ roll into the dry hard rock sound of 1970 by covering Mose Allison’s “Young Man Blues,” Eddie Cochran’s “Summertime Blues,” and the track “Shakin’ All Over” from 1960. The real showstopper though is the B-side: It featured the seven-minute “Magic Bus” with Bo Diddley beat, a duet, and a harmonica as well as a 14-minute version of “My Generation,” which became the defining song of the British “Mods” in 1966. Thanks to various breaks, rhythm changes, inserted episodes, and Tommy quotes, “My Generation” on Live At Leeds becomes quite simply a progressive rock demonstration. The full Leeds concert, where the band primarily played tracks from Tommy, wasn’t actually released until 2001 on a double CD.

Shepperton is not in the north of England but southwest of greater London near Heathrow Airport. The city also has a stage at the famous film studios of the same name where concerts are held and can be filmed in top quality. Just like The Who’s concerts in Leeds and Hull four years earlier, Uriah Heep’s concert in Shepperton in 1974 took place only so it could be recorded — not for a live album, however, but for US television. Eight tracks were also subsequently released on vinyl but not until 12 years later when only three of the five musicians in the Uriah Heep lineup of 1974 were still alive. Long-time Heep producer Gerry Bron didn’t spend too much time deliberating over the LP packaging. So, is this an impressive live album from the early 1970s? Perhaps, but there’s simply no beating Live At Leeds in that department!

Live At Shepperton ’74 will probably never go down as a milestone in rock history. The concert was simply too tailored toward the material from the then-current studio album Wonderworld — that had four tracks that then reappeared as live versions. That said, the live album features by far and away the best Uriah Heep lineup. These five band members recorded four famous studio albums between 1972 and 1974 — plus the concert album Uriah Heep Live. The overlaps in repertoire between Live (1973) and Live At Shepperton ’74 are, incidentally, limited to the obligatory “Rock ’n’ Roll Medley” and the two reliable crowd-pleasers “Easy Livin’” and “Love Machine” — even these are both essentially pure rock ’n’ roll. When directly compared, the band was especially enthusiastic, almost overexcited in Shepperton — may­be they had a little help from some biochemical substances. The tem­pos are interestingly fast, David Byron makes a few mistakes with the lyrics, the background singing sounds a little anarchic, and Gary Thain’s bass is even grittier than usual. 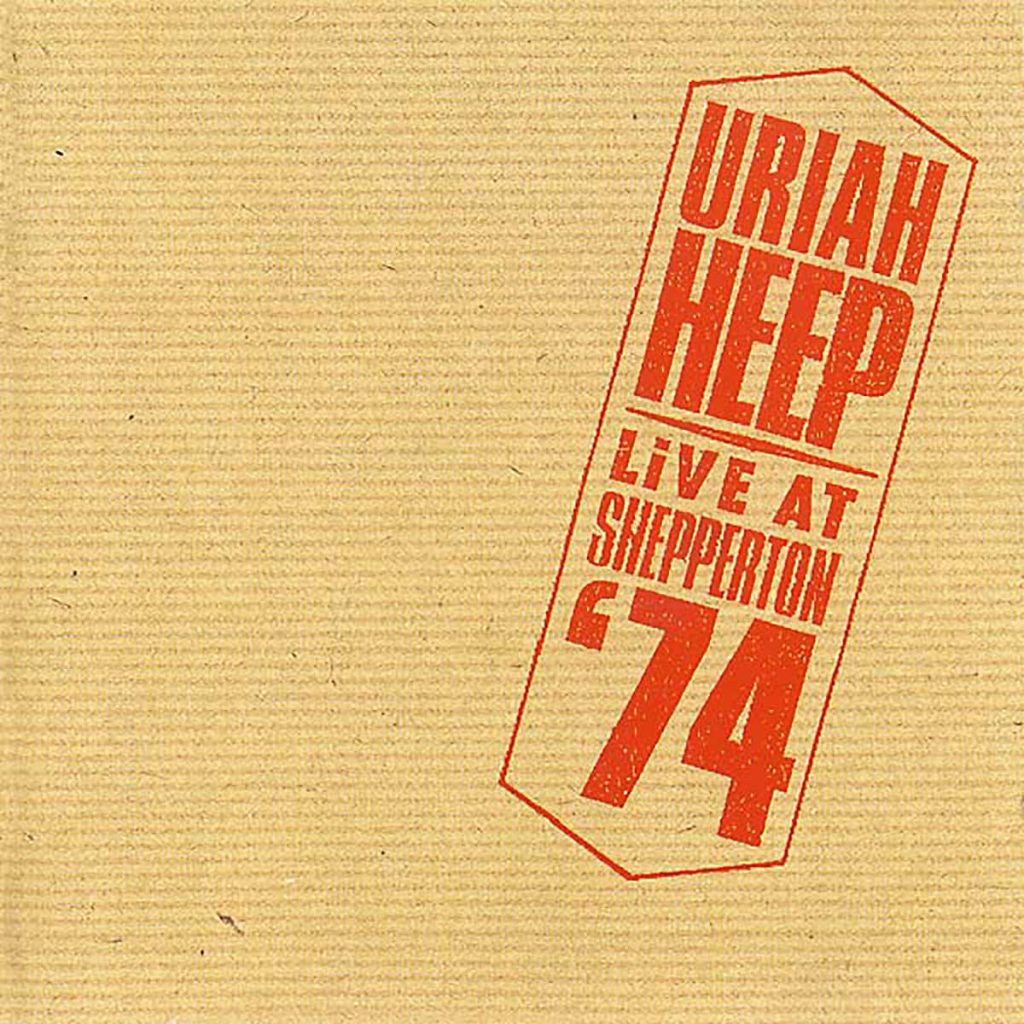