Aavik is on a roll, and the pleasure is all ours. Introducing the I-580. 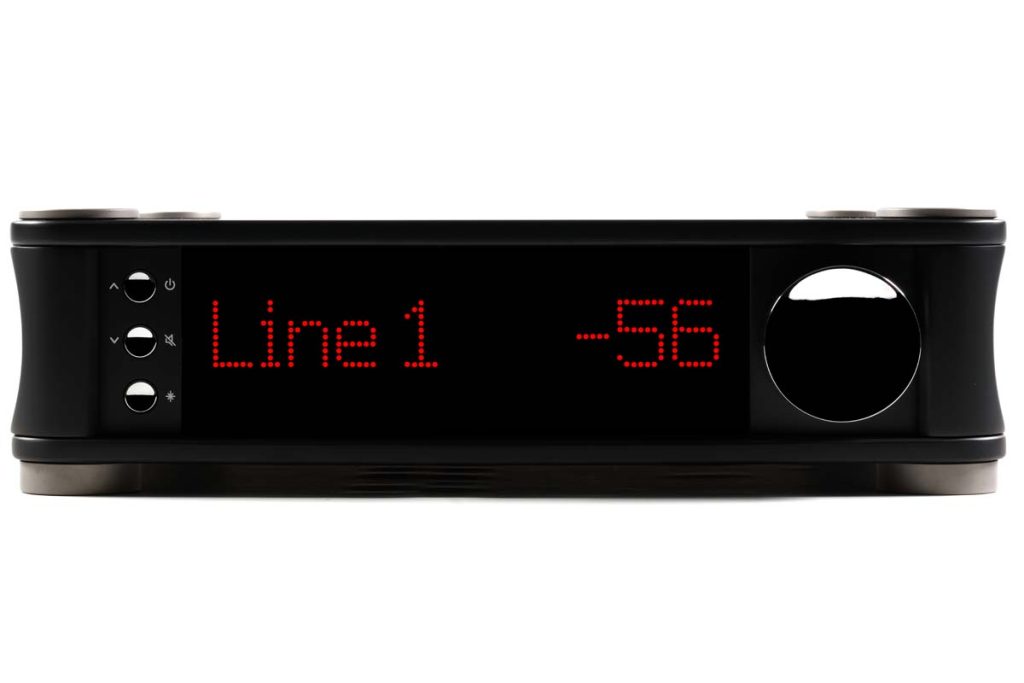 We’ll get to the Aavik I-580 in a moment, but first let’s take a glance back. Because, well…Aavik…integrated amplifier…something rings a bell…oh yes: just one year ago, the Danish manufacturer’s U-380 model took my listening room by storm. It dominated the space with a striking design, exceptional sound quality and the workmanship worthy of a competition for prestigious vault makers. The integrated amplifier made a clean sweep, especially in the often-overlooked core discipline of integration. Beneath its thick aluminum housing segments lived a world­class DAC and an outstanding phono equalizer that could be extensively adapted to the cartridge. Game, set and match.

So, I suppose, after that triumph, only Michael Børresen would question everything and adorn those metal feet with a new integrated amplifier that seemingly flies in the face of everything making the U-380 such a resounding success. 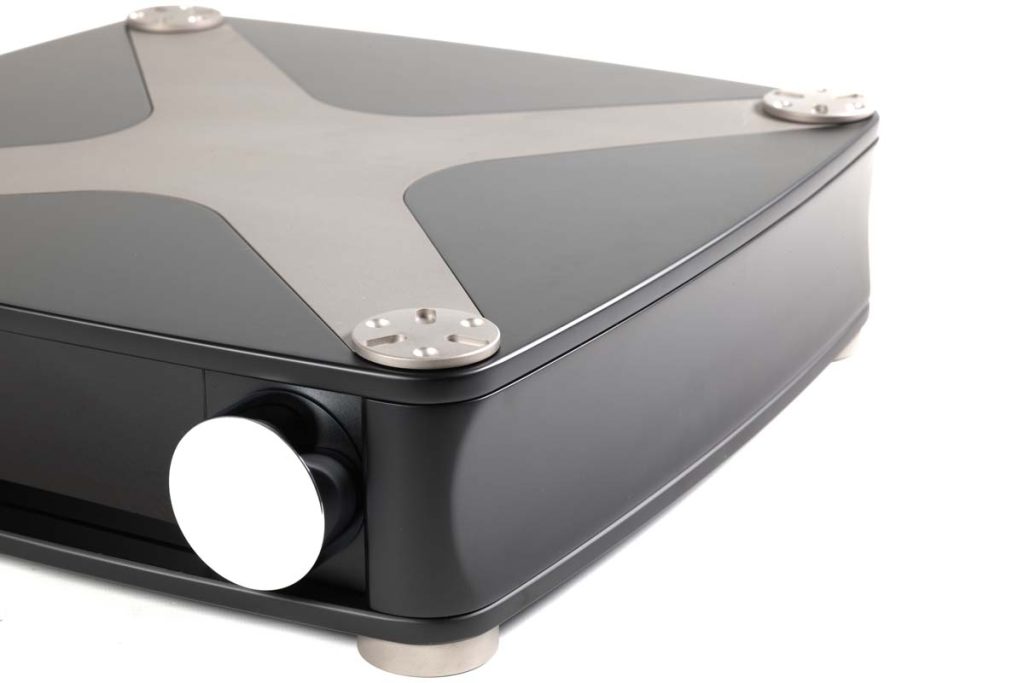 Aavik developer Børresen, who approaches many things from original angles, has now unveiled not one but three new integrated amplifiers. Their names are “I-180”, “I-280” and “I-580”, and they are all, in a nut­shell, the pure analog line-stage amplifier section of the U-380 in a new housing design. All three are pure analog Class D amplifiers surrounded by lightweight housing with minimal metal usage. They even achieve weight savings in their connections and make much greater use than any previous Aavik component of the proprietary, special interference suppression technology of sister company Ansuz.

According to Michael Børresen, a central reason for this new approach of building separate units is to relieve some of the power supply strain. He explained to me that removing the DAC and phono section from the amplifier leads to “staggering” sound quality improvements. An entire family of new Aavik devices has been born based on that realization. The company now makes and sells separate, stand-alone integrated ampli­fiers, DACs, phono equalizers and streamers across its different ranges, including the entry-level 180-series, the ambitious 280-series and the top-shelf 580-series to which my integrated amplifier belongs. At this point, we could throw in some solid arguments for why separating units isn’t advisable — but this ultimately depends on how it is done and what happens when you put it to the test. 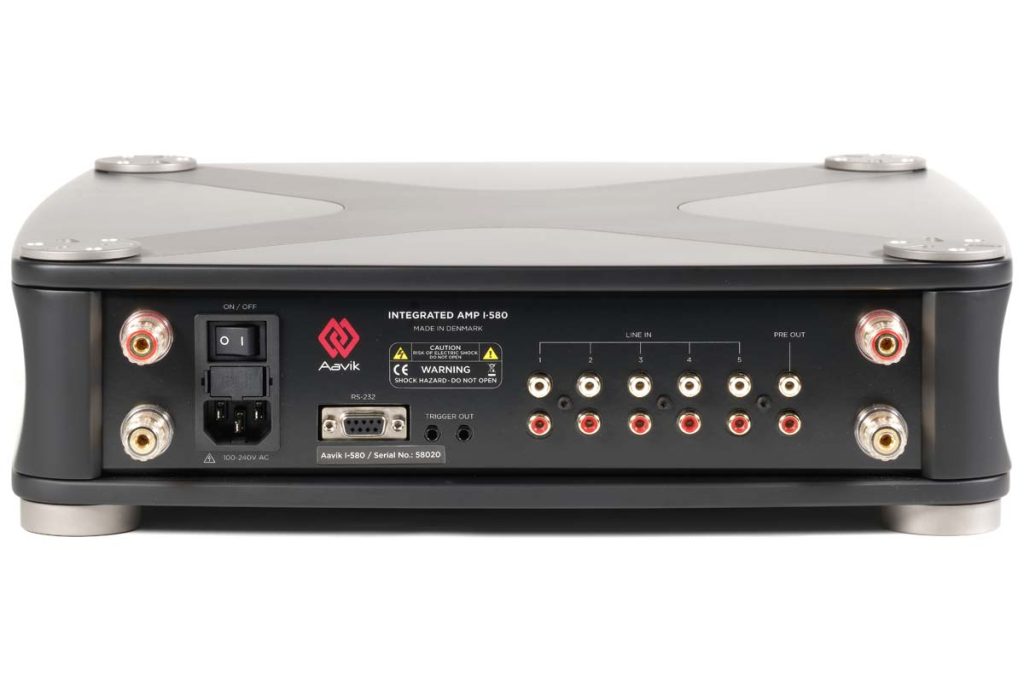 Børresen’s remarks about the new housing design piqued our interest. He stressed: “Materials matter!” And it all started with the Darkz device feet from the sister brand Ansuz. This is where Michael Børresen began his metallurgical experiments, working his way from pure aluminum to various coatings of the same all the way through to titanium — in pure form and with a tungsten and zirconium coating. Every material, every metal, he said, distinctly affects the sound. Titanium, according to the Dane, which is quite expensive and so hard that any processing becomes a costly affair, boasts a particularly clear sound quality. On the other hand, he said, aluminum, the global high-end community’s preferred ma­terial, is not the best choice for electrical devices due to its paramagnetic properties. Therefore, Børresen has taken appropriate measures with the 180/280/580-series and for the housing’s base material by utilizing something similar to the well-known MDF, but which is harder and metal-free. This renders the I-580 delightfully lightweight and velvety warm to the touch. All of the I-580’s metal parts — the corner cylinders with Darkz supports above and below (yes, they are stackable!) and the distinctive cross on the cover — are titanium.

Copper, incidentally, also features in the I-580. I didn’t need to ask Bør­resen whether the copper sheets around the electronics in the amplifier function as shielding. Of course they provide protection, but before I knew it the developer was expounding on copper-plated aluminum heat sinks in maritime radio, inductance and frequency bandwidth, and my head was spinning… 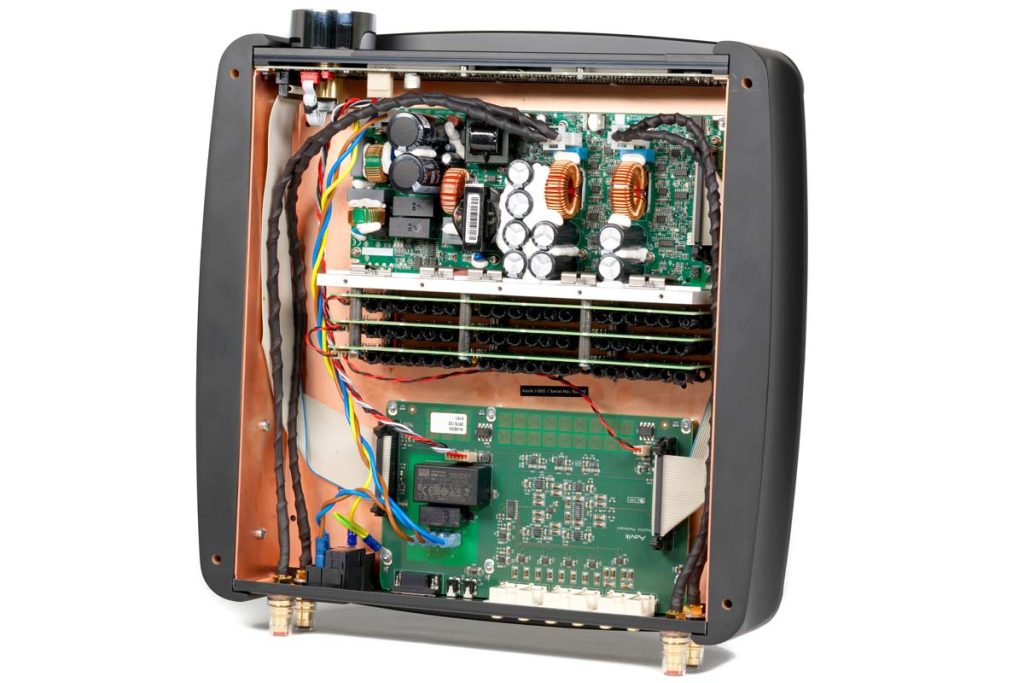 Yep, materials science stole the show from electronics this time. As with the U-380, the I-580 boasts Class D Pascal modules. Their fine-tuning makes all the difference as even the smaller siblings (the I-180 and the I-280) are equipped with identical Pascal circuit boards. The “big broth­er” sets himself apart here with modified input and output stages, as well as input switching designed to optimize sound quality.

In a high-end world increasingly inhabited by digital all-rounders, the Aavik I-580 is a blessing. It boasts a dot-matrix display with bright red LEDs that occupies the entire front panel and is incredibly easy to read. It is operated app-free via three multi-functional buttons and a large rotary knob (alternatively via an Apple remote supplied as standard). The rear connectors are rather lightweight. According to Børresen, they realized that these offered improved sound quality compared to the usual solid structures. He referenced pioneers of lightweight design such as Britain’s Denis Morecroft and his ultra-lightweight amplifiers and cables under the DNM brand, which have earned the highest respects from experts for decades. 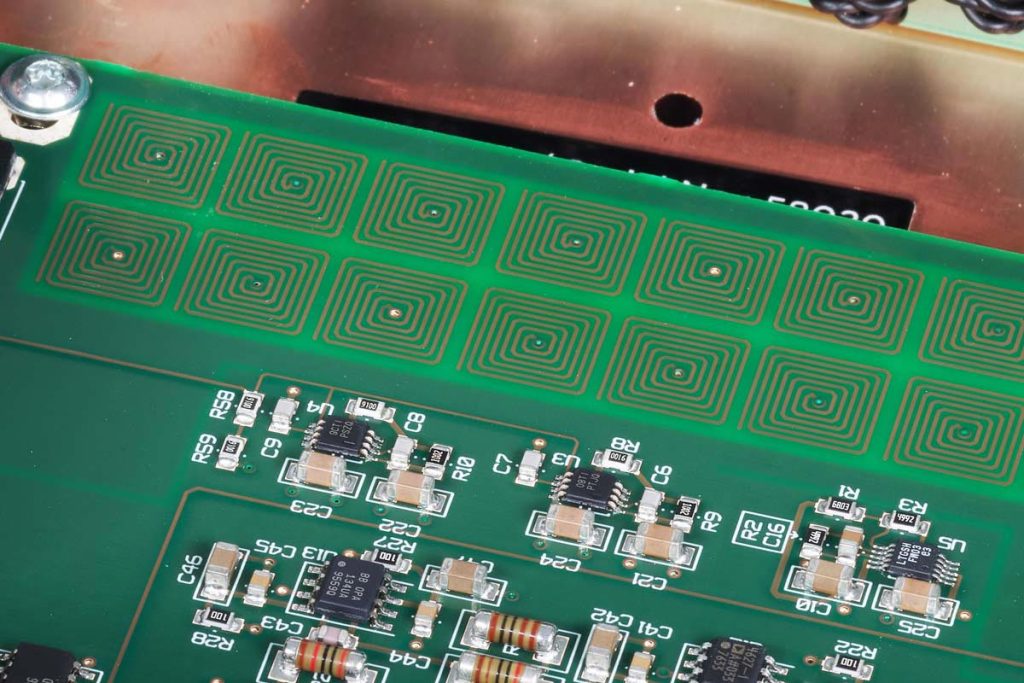 But there is also Ansuz tuning galore. The device features so-called active Tesla coils, active square Tesla coils, analog dither circuitry, and anti-ae­rial resonance coils — good luck translating that term! Size really does matter here, and among the three new I-integrated amplifiers the I-580 has the largest number of these active ingredients that directly impact the audio circuitry.

Rarely has a component fitted into my chain as smoothly as the Aavik I-580 — it was almost seamless. It felt strangely familiar placing the com­pact device on the rack and connecting the sources (turntable, CD player and DAC) to the analog line-level inputs, exclusively of the RCA variety. Then came the moment of truth, something which never gets old — the very first notes: right off the bat there was a solid sense of coherence and the bandwidth, the three-dimensionality, the timbres and the dynamics were all present. I began listening to music, truly rejoicing again and again at the huge display, and my days with this Danish delight simply flew by. 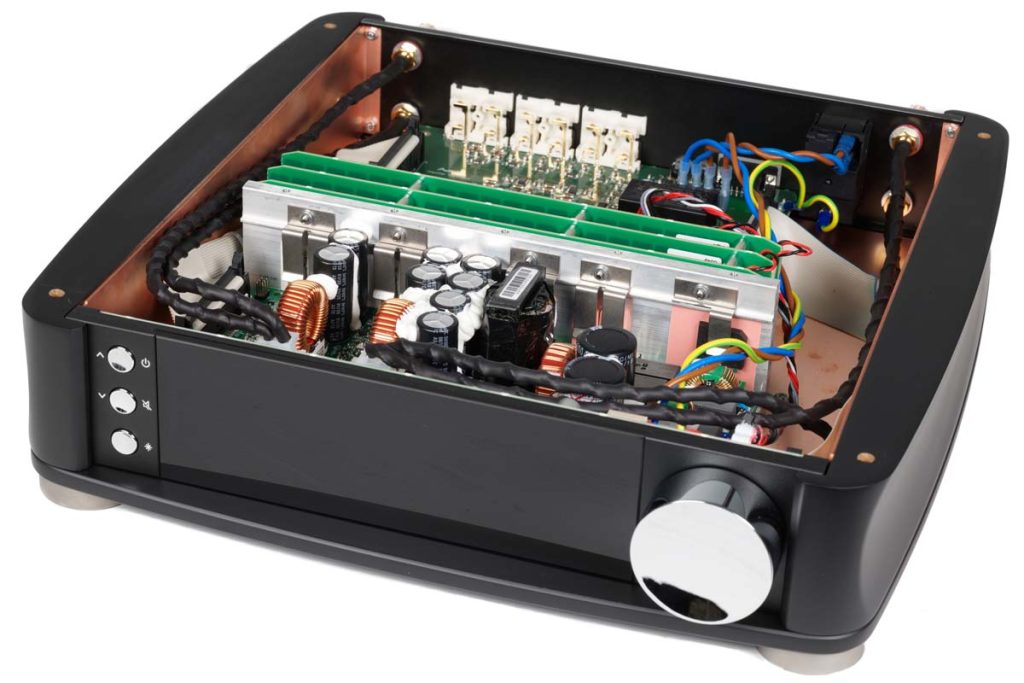 Last year, thanks to Roon and Tidal, I discovered an album that remains one of my most highly treasured: Origami Harvest from US-American jazz trumpeter Ambrose Akinmusire. I will certainly be shining the spotlight on this heady mixture of modern jazz, rap and string quartet more frequently in the future. Rarely are sonics, groove, composition and artistic messaging experienced in such captivating unity. The Aavik I-580 managed to do full justice to this technical tour de force of an album (Blue Note, unfortunately not released on vinyl). The thunderous drum roll lead-in stood steady as a rock in the room, the strings came across sublime with a perfectly integrated spectrum of overtones and into­nation. The Danish device effortlessly balanced sounding impeccably controlled yet simultaneously relaxed and swingy. There was constant flow, continuous movement, and never any static rattling off of sounds. The days continued whirling by yet this never once felt like work. This test was an absolute joy. 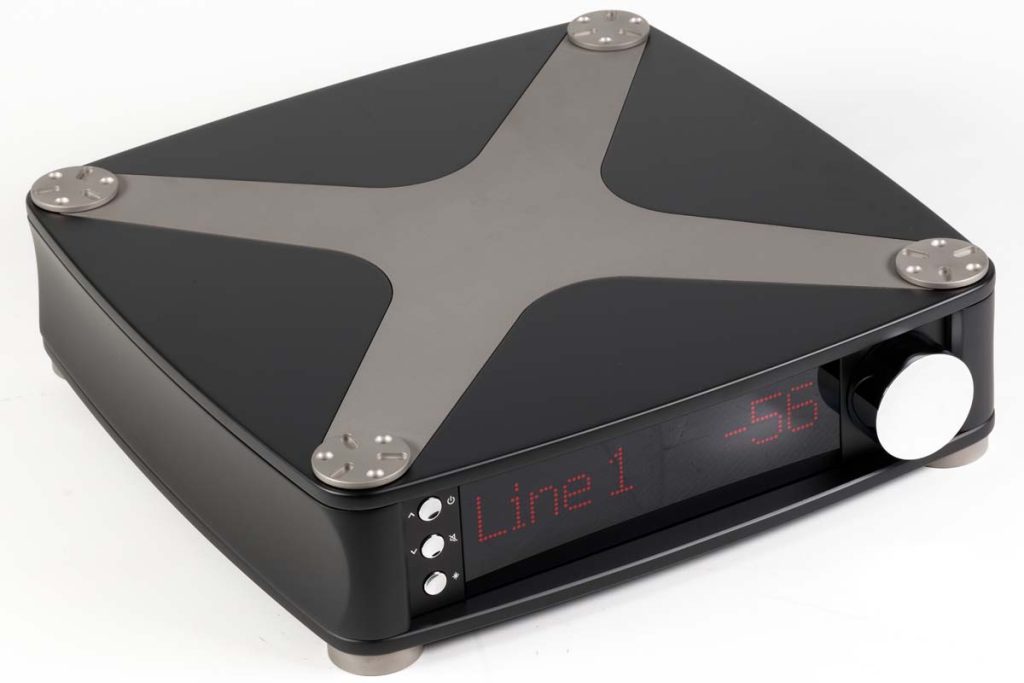 During my time with the Aavik device, I wrote a very specific note for myself: “Exceptional clarity and decisiveness in the sound profile; definition of spatial references.” I was already impressed by this with the U-380, but the newcomer is at least as good: I never once thought “yeah, it’s there somewhere”. The legendary production Buena Vista Social Club had a magnetic pull on me and sucked me into the warm glow of a Cuban dance hall, right in the thick of it — in front of me played a semi-circle of musicians, with every voice and instrument painted as an unshakable, life-sized acoustic image. Then, in the roughly outlined, stripped-back studio glory of Jason Mraz’s album entitled We sing. We dance. We steal things, his presence simply wowed me — just listen to the track “If It Kills Me”, a real gem, and even the slight humming of Mraz’s guitar amp gave me goosebumps.

So, once again, the only conclusion to be drawn is that Michael Børresen is really onto something. His latest bold stroke of an amplifier is expen­sive, very expensive in fact, and equally unconventional, but it’s not just to be different — clearly this is unconventional both on purpose and for a purpose. In short, the Aavik I-580 is an absolutely formidable amplifier. Period. Listen and enjoy — this Danish beauty will make it more than easy for you. 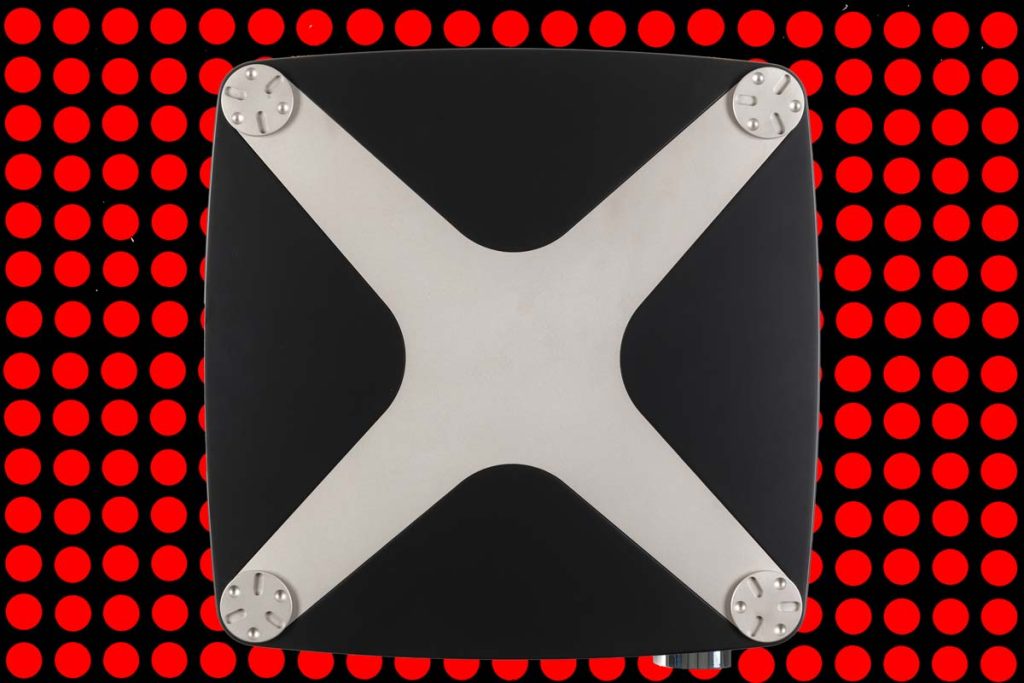 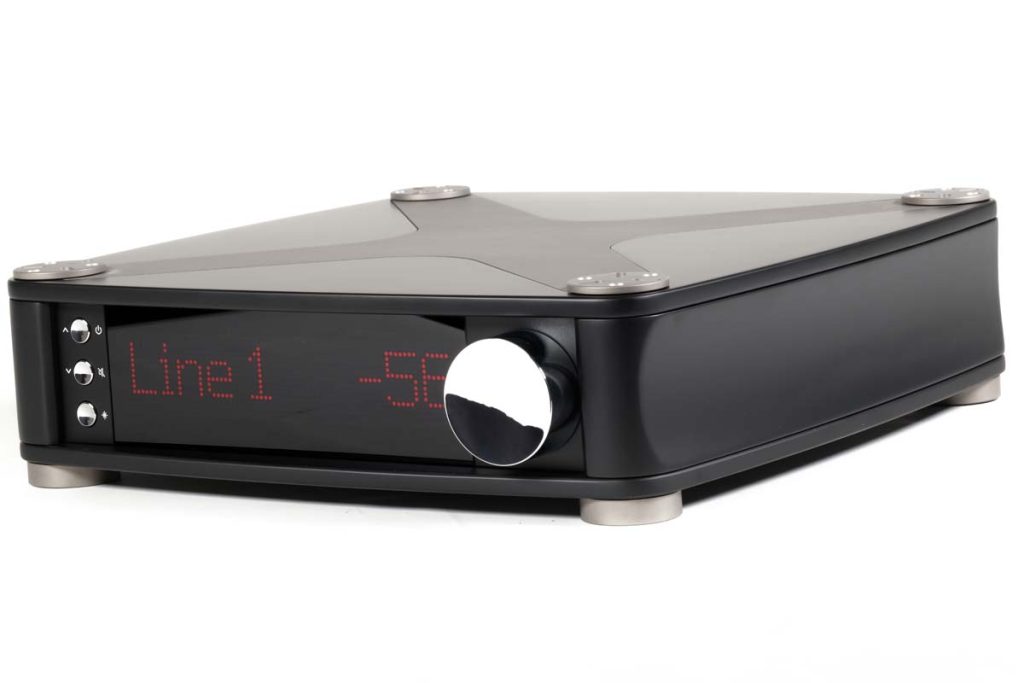