The power of causality

For quite some time, the CD player has been thought of as a generally outdated component. The people at Audio Note believe the opposite is true, and their CD 1.1x shows how modern and “analog” this digital technology can be. 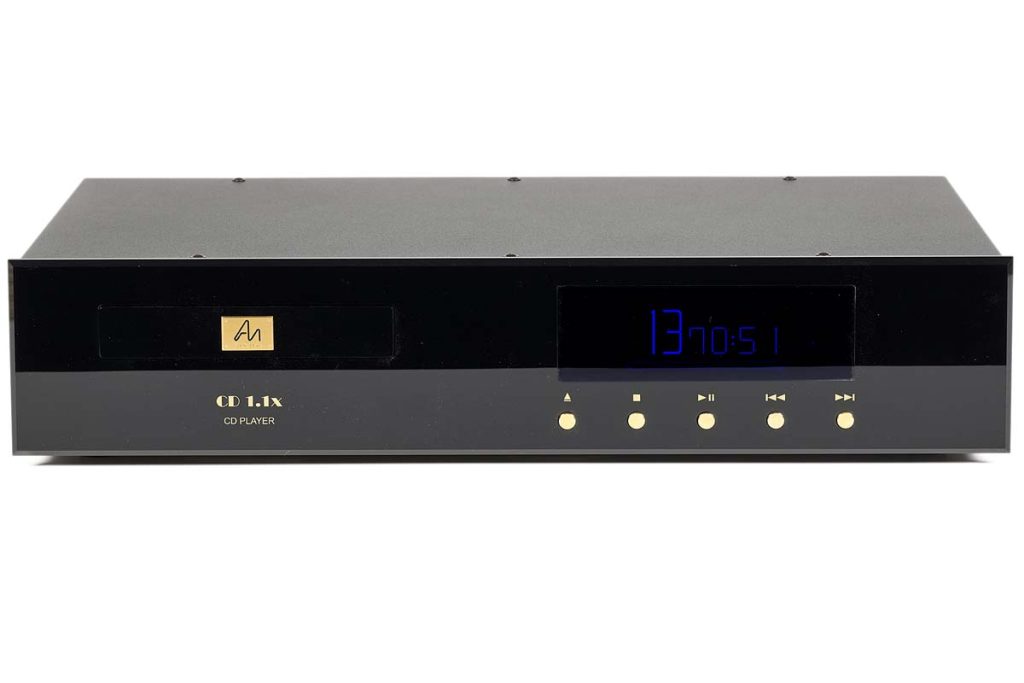 It almost seems as though Audio Note is deliberately swimming against the prevailing tide in music reproduction. The greater the trend toward streaming and downloading, the better this British company can superbly showcase the qualities of (nearly) bygone technologies, of which fewer and fewer advocates exist. Most modern consumers enjoy music by connecting to the web, home network or cloud. While this works extremely well, listeners must consume whatever is offered. Their choice of streaming service is likely the only control they have over the data source and origin. Equally frustrating is the almost total lack of influence over online music channels. On top of this, the area in which I live, the Eifel region of Germany, has been experiencing Internet connection problems over the last few months due to recent flooding. Just in the last few days, we have had several complete Internet blackouts. Therefore, I’m deeply grateful to still be able to fall back on a CD player like the Audio Note CD 1.1x. This technology works even when nothing else does. Under circumstances like these, inserting the disk into the little tray generates the same elation as when I would put my favorite record onto the turntable. Handling a CD seems to rekindle that “analog“ feeling. 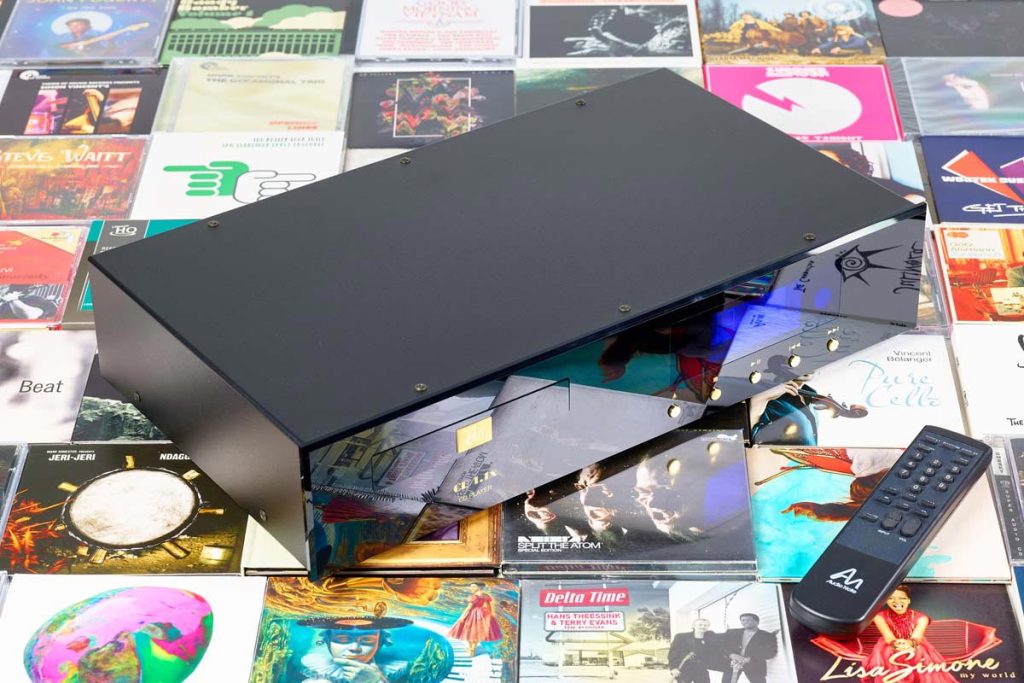 The CD 1.1x has no rough edges. The purpose of this simple and straightforward machine is obvious even to the completely uninitiated. Suitably dimensioned, its front has a CD tray that pulls the discs cleanly into the Philips mechanism (modified by Audio Note), as well as the necessary operating buttons. At the rear, there are analog cinch and digital coax outputs, in addition to the mains cable connector and mains switch. The remote control is a basic plastic affair. And that’s it! The player is available in high-gloss black (our test unit) or silver. Purchasers of the black version should keep a microfiber cloth handy as dark, glossy hi-fi appliances seem to attract dust like a magnet. Overall, the unit has an elegant and exclusive look, as is to be expected from this British manufacturer.

Unpack the unit, place it on the rack, attach two RCA cables (also from Audio Note) and you’re ready to go. No need for a user account, installation or password. And no need to worry about audio formats. Our CD player just has one: S/PDIF with 16 bits and 44.1 kHz sampling. 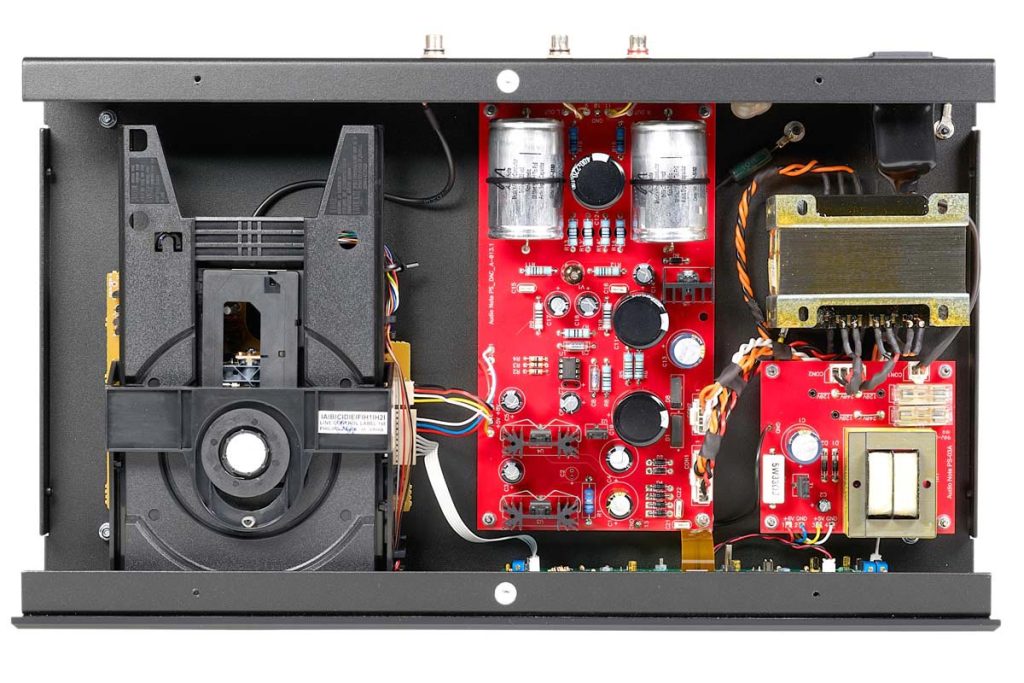 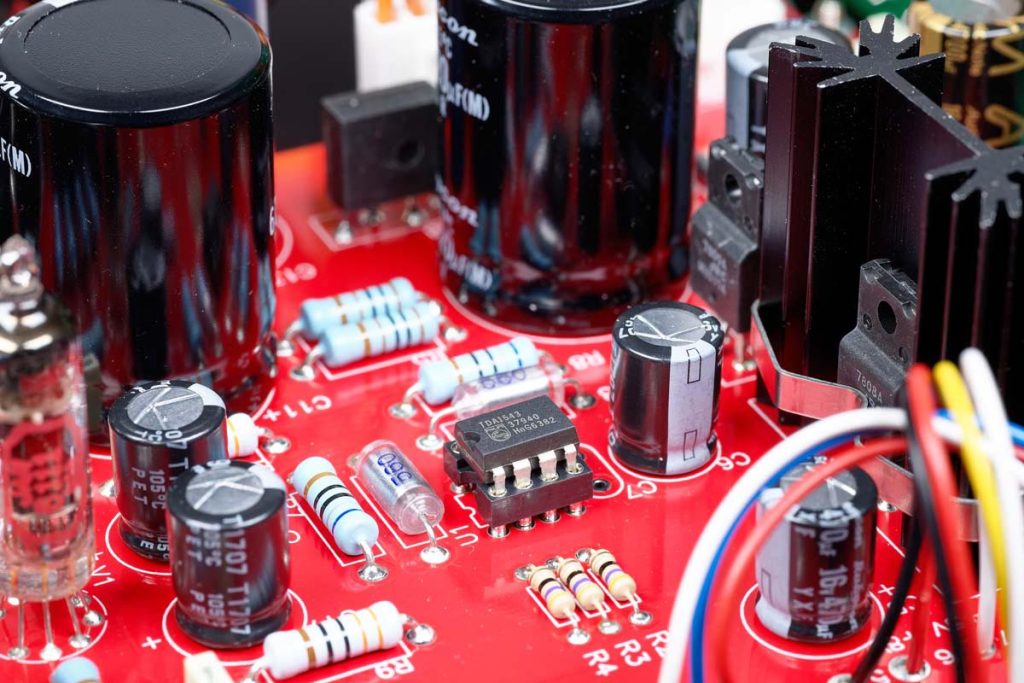 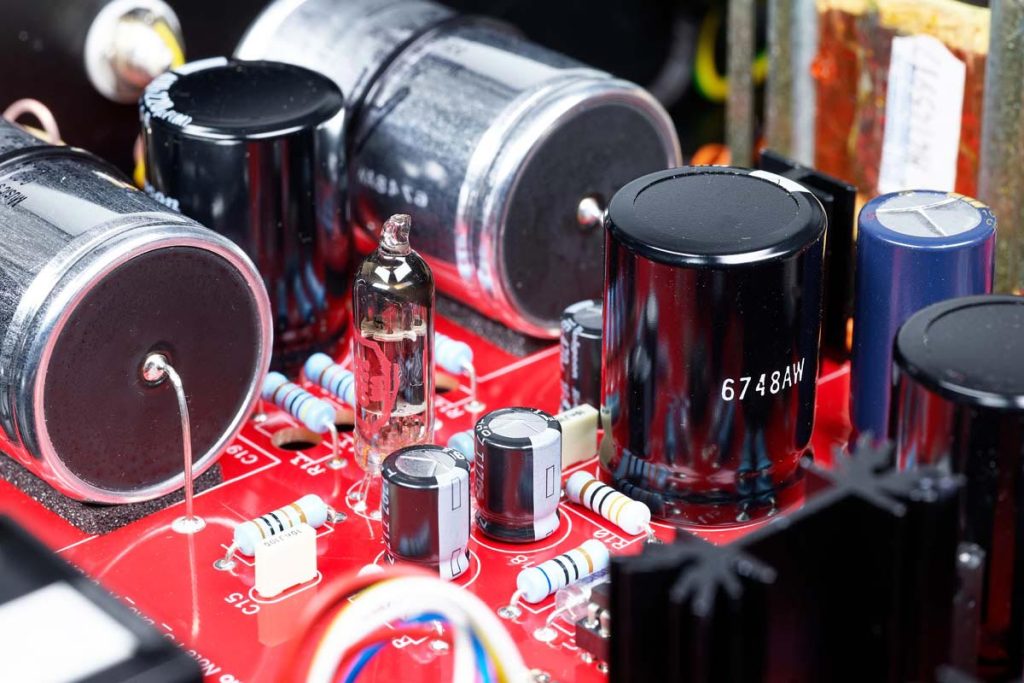 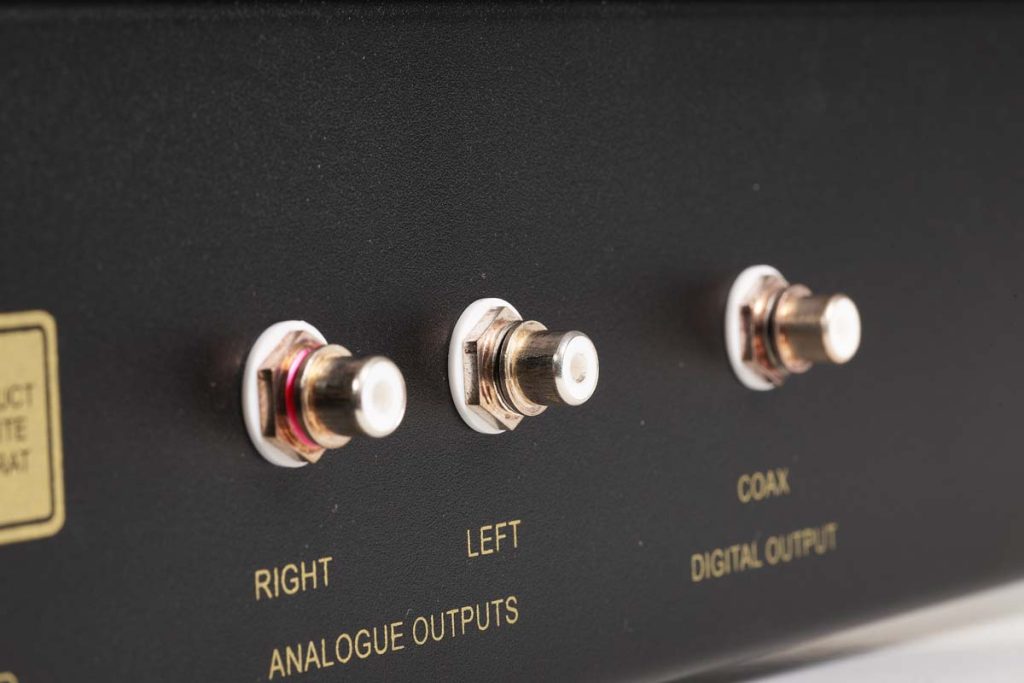 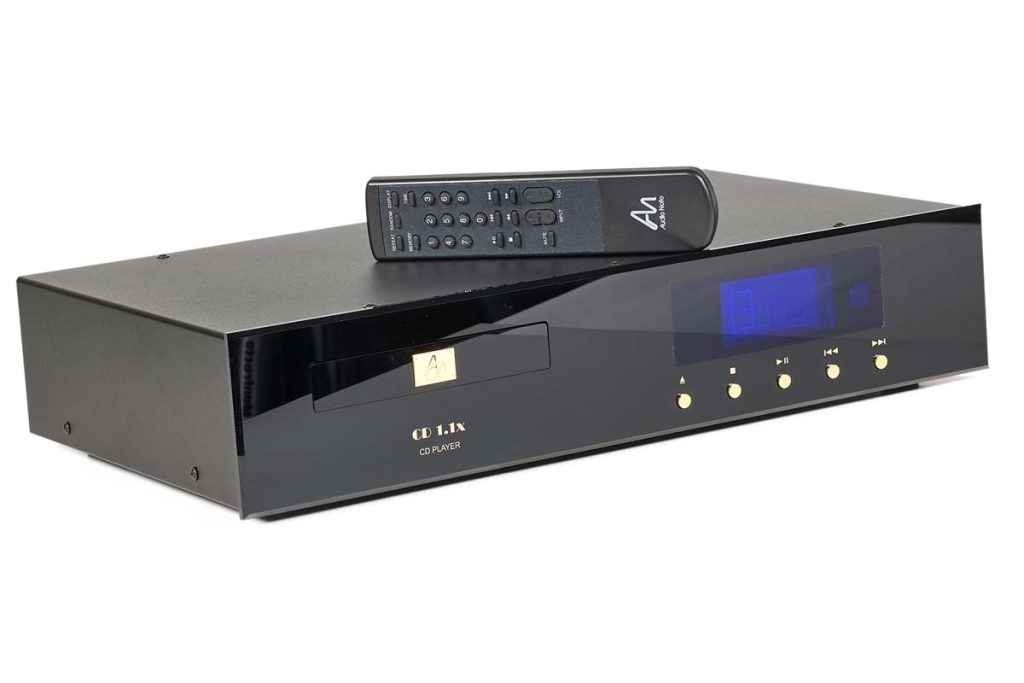 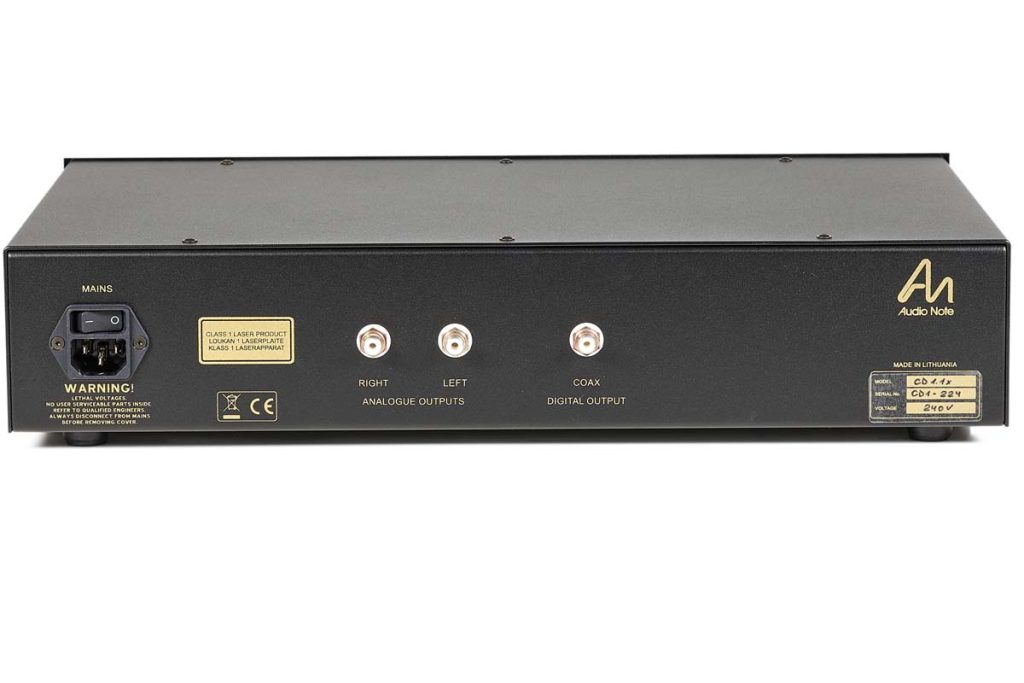 As is so often the case with Audio Note, the magic lies within the inner workings of the elegant unit. The mains transformer uses conventional core and winding technology, so there’s no massive toroidal transformer or switched-mode power supply. As well, of course, it’s manufactured in-house. Between the two huge tinfoil output capacitors (also made by Audio Note) is a 6111WA miniature dual triode for producing the tones identified by the developers in their extensive listening sessions. Calculation and simulation is one thing, but the listener’s ear is the final test. During this fine-tuning, Peter Qvortrup and his team noticed that the Philips TDA1543 converter they use produces the best results without filtering or sampling. Therefore, the music signal is passed to the amplifier without any limiting of the bandwidth or artificial smoothing.

My listening test was practically a battle of the giants, with the CD 1.1x competing against my beloved Sony SCD-1, which has rarely been bested. The SCD-1’s strengths lie in its superb precision and operational smoothness. As for sound, it boasts perfect linearity and reproduction sharpness, with Linn’s Sondek CD12 being the only player to add a decent amount more. However, both of these CD players are often accused of taking their outstanding symmetry to the point of tedium. My former Helios 2 reference player was somewhat more stimulating in this respect, bringing greater freshness and groove particularly through its timing. Moreover, this is precisely the strength of the Audio Note player.

Just like the Helios – it seems to make the music faster and groovier. Compared to the Sony, its fundamental tone is crisper and focuses more on the transients. In the bass range it is somewhat leaner, but with greater conviction, and delivered in such a way that the same CD played by Sony sounds somewhat tired and diluted. Sony’s treble resolution at first sounded superior, with the Audio Note shifting it more to the middle register. In turn, I avoided playing the CD 1.1x at high volume to begin with. However, a fan of the unit advised that I give it “a couple of hundred hours of use” before coming to my final verdict. So that’s just what I did. After one week of continuous operation in Repeat Mode, the CD player was totally transformed. Those crisp transients were more melodious, while the dynamic transitions lighter and more composed. Despite its fundamentally more sonorous touch, the treble had also become finer and more open. But the best thing about this “tuning” is that player does it all by itself. You only need a little patience. During a new face-off, the SCD-1 even sounded a little pretentious and artificial in comparison. Pieces from my favorite CDs all sounded more accurate and, above all, livelier on the Audio Note CD 1.1x.

The secret behind all this: the Audio Note properly balances cause and effect in the music. The same could also be said of the relationship between dynamism/timing and timbre/spatial reproduction. With the Sony, some sounds are extended even to the point of exaggeration: there’s no scratching of the violin bow, no clacking of the plectrum on the guitar string and no slap of the drumstick on the drumhead. In other words, although the effect is amazingly good, the causality is ignored. However, the Audio note is mercilessly honest in this respect, with the causality even occasionally producing some brusqueness in the music: Diana Krall’s voice sounds pretty raspy now and again, you can almost hear the saliva in John Lennon’s throat and the vibrations of the membranes in AC/DC’s guitar boxes. Yet this liveliness is precisely what makes this CD player so impressive across the board. As a consequence, my SCD-1 now comes across as a little glib and boring. I truly miss the groove and dynamism of my Audio Note test unit, and was extremely unwilling to send it back to the magazine after an intensive three weeks of scrutiny. My Internet connection still isn’t working properly, so my office has fallen silent for the moment. It wouldn’t be too hard to return to the fall back device I used previously. But after my time with the Audio Note, I’m finding it incredibly difficult!

In essence, of course, the Audio Note CD 1.1x is simply a source device like many others currently on the market. But Peter Qvortrup and his team have created an absolute highlight of the audio scene, through their ingenuity, refined ear and technical audacity. This wonderful player manages to reconstruct musical events in precisely the way that they must originally have been performed. Its groove, dynamism, timbre and timing are so spellbinding and enthralling that a good deal of the music’s inner self can shine brightly even through a digital medium. Let’s hope that devices of this kind remain with us for a long time to come.