Musik You Can Actually Walk Through

You’re guaranteed to rub someone the wrong way when it comes to Audio Note – but that makes listening to the Level 6 preamplifier and the Audio Note Tomei Kensei power amplifier even more exciting. 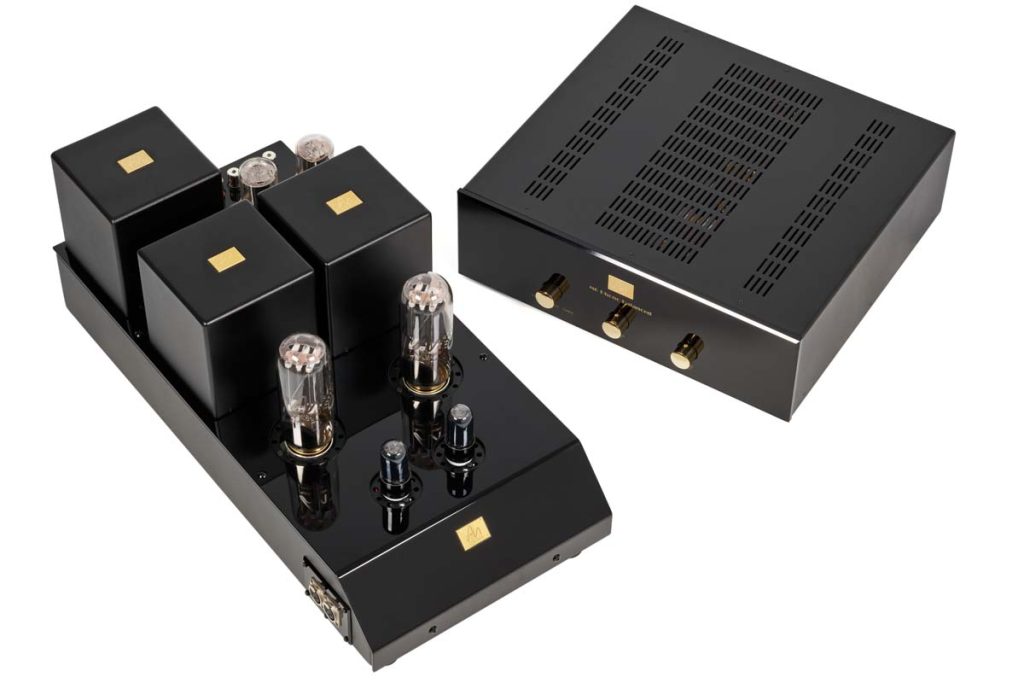 As either a writer who enjoys music, or a music fan who enjoys writing, as soon as you mention Audio Note you may as well give up before you’ve even typed the first few letters. You see, you’ll never please everybody. For instance, if you mention the fantastic sound quality, then some tech-savvy high-end fans are bound to claim that an extensive hearing range is not accounted for, presuming that the upper hearing threshold is 10 kilohertz at best. If you criticize aspects of technical playback, all the rest will accuse you of clearly not understanding the whole concept of the music and suggest that you take your three test CDs and go lock yourself away in a windowless basement — and maybe stay there forever. If you’re enthusiastic about the devices themselves, their hefty price tags will lead to accusations of a biased critique on the grounds that you’re enslaved to the industry. But then if you criticize the pricing, you get criticized for being petty and jealous because you clearly couldn’t afford these devices (which is actually true!), and therefore simply want to bad-mouth them. So there! I have set out the basic conditions for my article. I’m bound to be told that I’ve got it all wrong, so I’m giving myself carte blanche and just enjoying the freedom of putting down whatever I want. Splendid! Now we can proceed to take a closer look at the Audio Note Tomei Kensei and M6 combo.

I’ve had experienced the pleasure of Audio Note devices on a few occasions. The first time was a small Level 1 system which thoroughly impressed me. The next time, I listened through different levels of the reasonably priced AN-E loudspeakers performing at quite a close level to their much more expensive siblings, which got me in some really hot water. My third experience was an afternoon listening to the company’s own four-part super CD player in a fitting Audio Note setting which, for me, from an emotional perspective, remains a CD playback highlight that stands head and shoulders above the rest (something that also vexed a fair few people). 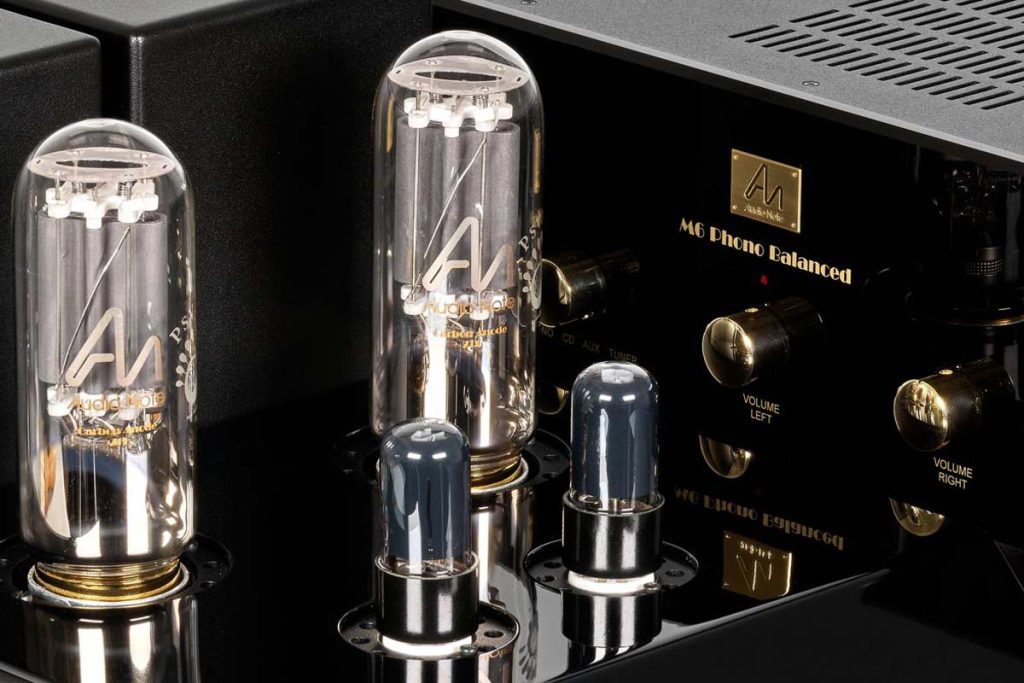 But I still hadn’t gotten to test expensive components in detail. So I was thrilled when a real-life Level 6 preamplifier (Level 6 Balanced Phono) and a heavyweight power amplifier (the outrageously expensive Audio Note Tomei Kensei) were announced. Both devices, which are assuredly far beyond my price range, at best fall somewhere in the middle of Audio Note’s price list.

I asked myself: How can I structure this encounter to ensure that it is objective, is fair to the devices and their manufacturer, and provides you — my dear readers — with as comprehensive a picture as possible? Given the situation, I proceeded as follows: I spoke at length with the German dealer Stefan Wörmer, went over a few questions with the company owner Peter Qvortrup, and finally decided, despite how nice both men clearly are, that they wouldn’t necessarily have any bearing on the rest of my life (as I don’t make a living as a writer!). Therefore, I would write honestly about my experience listening to the devices in two different rooms and with three different types of loudspeakers. I decided that it wouldn’t matter if the manufacturer, dealer, editorial team or any readers decided to stop talking to me afterward. If I gave myself carte blanche, and the freedom to write whatever I wanted, then I would be doing the right thing.

Both pieces of kit left a lasting first impression when I unpacked them: the power amplifier alone was heavy enough that my back and hands gave me grief for a few days afterward. However, this is not a criticism, simply a fact, given that if you buy such a system it will be installed for you. 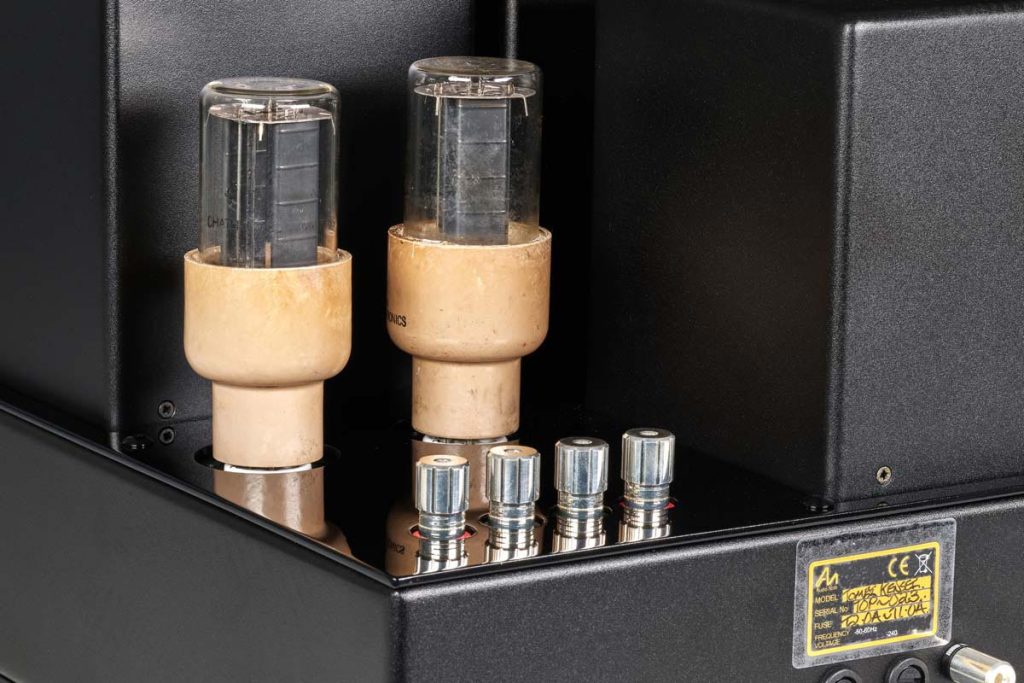 Both amplifiers were interconnected in my music room via an enclosed symmetrical Audio Note cable, with my trusty Mark Levinson No. 390s working upstream in the chain and my Sky-Audio Verdade loudspeakers plugged in to begin with. But first, a little warning: if you ever want to test these amplifiers, make sure that they’re properly warmed up. They perform far better a good 30 minutes later than when they’ve just been switched on. I’m not certain why exactly that is the case, but in my 20 years writing about all things hi-fi, I’ve never encountered amplifiers that respond so sensitively to this. Both amplifiers need to be worked in for a while before they can really show their worth. 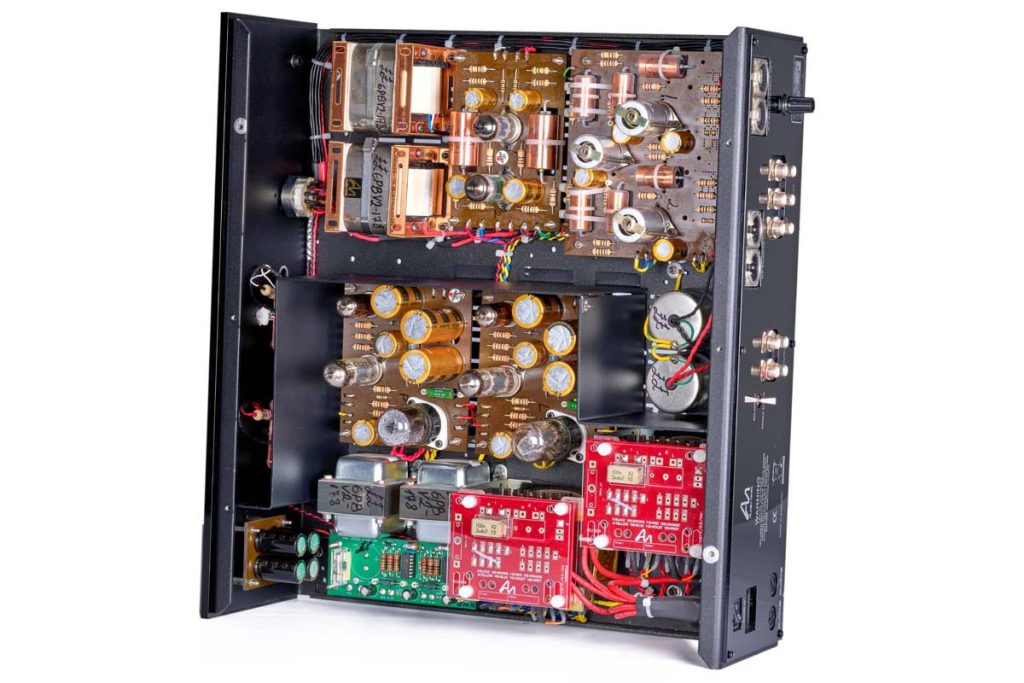 First off, the Panocha Quartet played early string quartets composed by Antonín Dvorák. And what I heard refused to fit into any of my usual evaluation matrices. All I can tell you is that at that particular point in time the sound events’ spatial definition seemed somewhat diffuse, the cello could have been snappier in the lowest ranges and the whole performance seemed highly nuanced tonally, yet extremely intense. On we go; however, the two amplifiers weren’t making it easy for me to skip forward, as the music was simply too interesting. My usually swift checking-off of the critical points (listening, forming an opinion then skipping to the next track) didn’t take hold, and I stayed where I was: listening. I just couldn’t put my finger on exactly what I found so fascinating, and breaking down the playback into individual disciplines seemed unproductive. So I carried on, and ended up listening to Beethoven’s quartets performed by the Takács Quartet, Beethoven’s piano concertos performed by Arturo Benedetti Michelangeli, Mozart’s operas conducted by René Jacobs, Strauss’s Salome conducted by Zubin Mehta, and finally Parsifal conducted by Thielemann. Needless to say, it was a very long night. 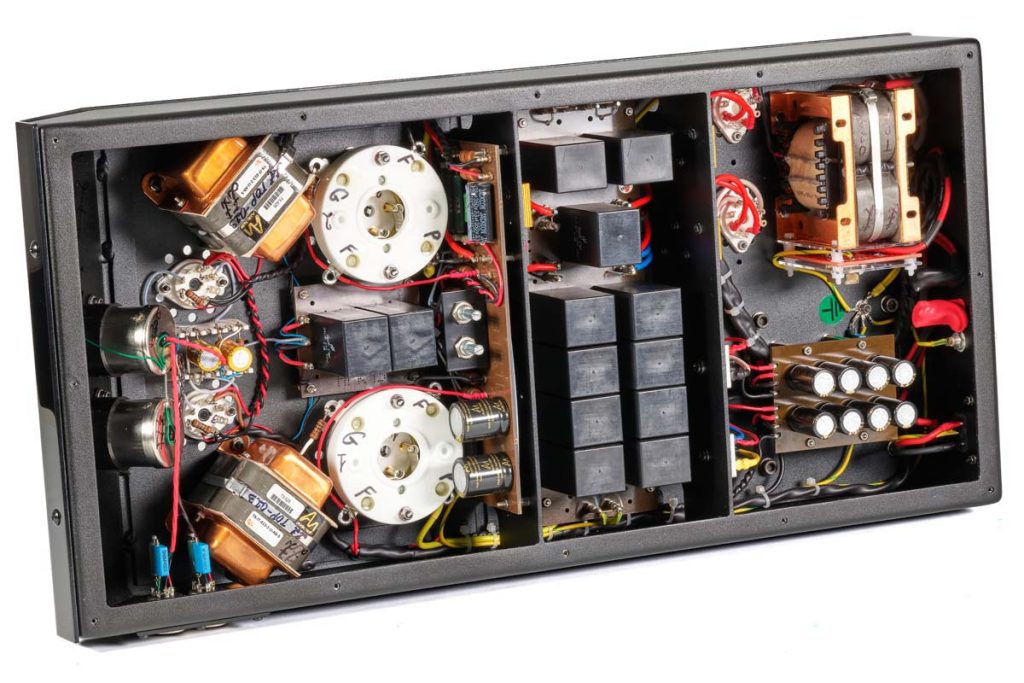 You’re surely sharing my excitement at this, but my “description” isn’t exactly useful. So I’ll try to break down this typically inaccessible account into individual points, even if picking it to pieces misses the very point of the whole thing.

Listening from a “technical” point of view, several points stood out. First, this system seemed to make the music immensely present in the room. It was impossible to escape. I got the distinct impression that easy listening sessions wouldn’t really be an option. That’s because the music was spatially reproduced very far forward. Voices and musicians came right up to me; there was no sound engineer’s safe distance. Individual sound events were reproduced on a larger scale, not with razor-sharp definition, but surrounded by a kind of “energetically pulsating aura.” I know — that choice of words is extremely strange — but I think you understand exactly what I mean by it. I wasn’t simply made aware of the existence and qualities of tones, rather they seemed to actually be alive. 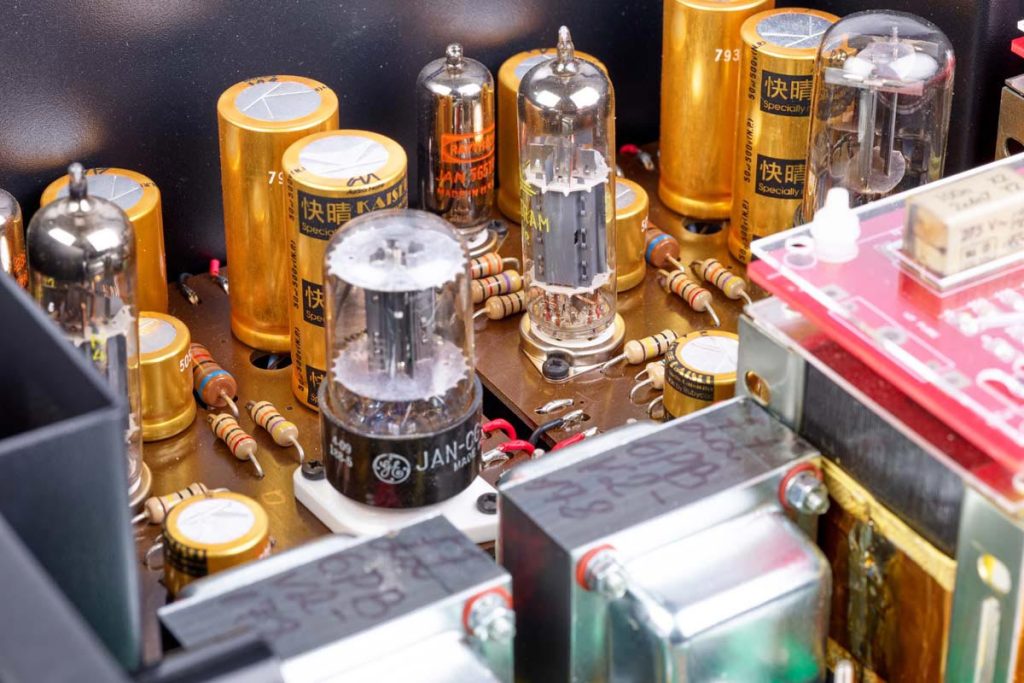 What’s more, and this is a special point, every sound was three-dimensional — each had an almost physical body, a spatial depth that was just as well defined toward the back. As such, a nice recording of a string quartet felt less like the usual glimpse into a studio, and more like a private living room performance, with sound sources that I could literally run around and examine from all angles. The more complex the music, the more spectacular this new reality became. With Parsifal, I was wandering through a musical garden where I could rediscover the music by walking through it.

Yet for Peter Qvortrup, this richness results from a very linear, clear and efficient concept, implemented with the best and, even more importantly, the right ingredients. Essential here is the 211 triode’s use in all of his top-end amplifiers, which lets him build an amplifier with a minimum number of stages and correction loops as well as acceptable output power. A 300B would apparently deliver less power, while a stronger 845 would provide more power but would require another signal processing stage, which would complicate and de-purify the circuitry. And apparently this conceptual simplicity is precisely what’s required to generate such direct and crystalline sound quality.

Another crucial part of this alliance, and the perfect partner, is the Level 6 preamplifier. Just like the Audio Note Tomei Kensei (Level 4), the M6 is also a Level 4 product. However, since China is one of Audio Note’s major markets, and the number 4 is unlucky there, they simply relabeled it. If you think that’s confusing, you should take a look at the full, 184 page Audio Note price list!

The Audio Note Tomei Kensei and M6 continued to work as described above when connected to other loudspeakers. Even with the small Spendor S3/5SEs, quite a mismatch, they still managed to make the two loudspeakers completely “disappear,” delivering a performance that sounded far beyond the capacity of the little closed-box two-way speakers. These small BBC monitor speakers had only ever sounded comparably “large” and “invisible” with a Gryphon Antileon and a large Pass stereo power amplifier. This experiment also pretty much answered the question of whether 20 watts per channel are sufficient. From a purely arithmetical perspective, you need more to get these little watt annihilators really going. But in practice, both volume controls dedicated to each channel never went past the 12 o’clock. 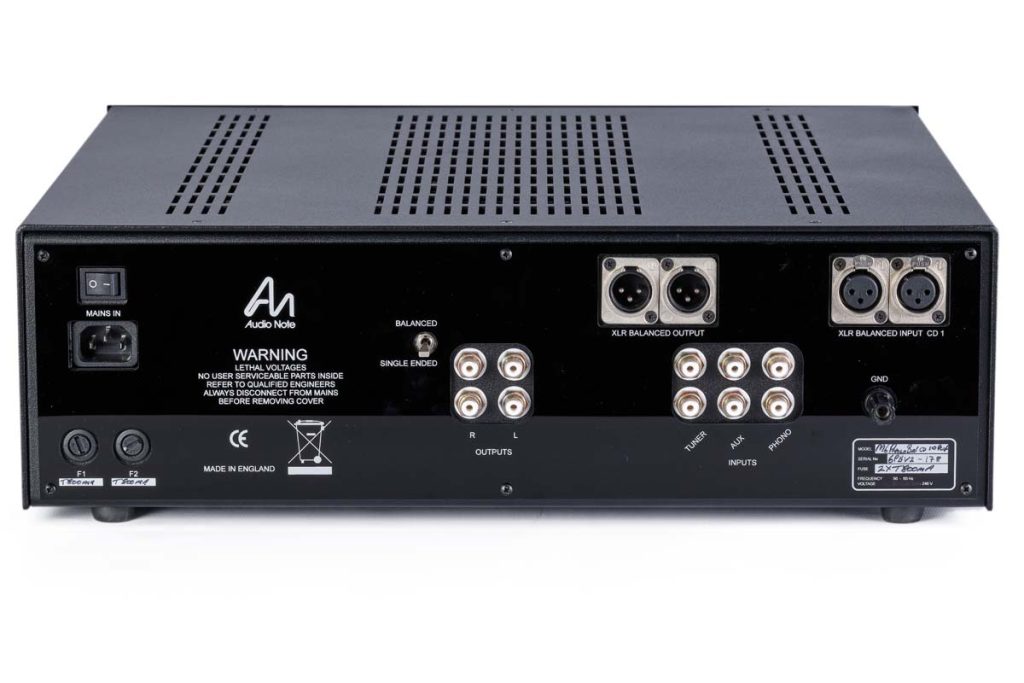 As you can see, I’m a bit all over the place. That’s because, on the one hand, given their purchase price, these two amplifiers have some properties that are worth trying: sound-related properties deviating far from the neutral central ground, separate volume controls dedicated to each channel, which are actually rasterized but would definitely be easier to use with a scale on the front panel, and an unprotected set of open tubes which could pose a problem if you have children or pets.

Yet on the other hand, this combo delivers a musical experience that you simply can’t get anywhere else, either for love or money — If you’re a fan of this emotional approach to music, and couldn’t be bothered to know how many centimeters the second viola stand is behind the first one. If all you care about is the music experience, the magic, the goosebumps, being left speechless and being convinced immediately to scrap the TV, then I can’t think of a single alternative. 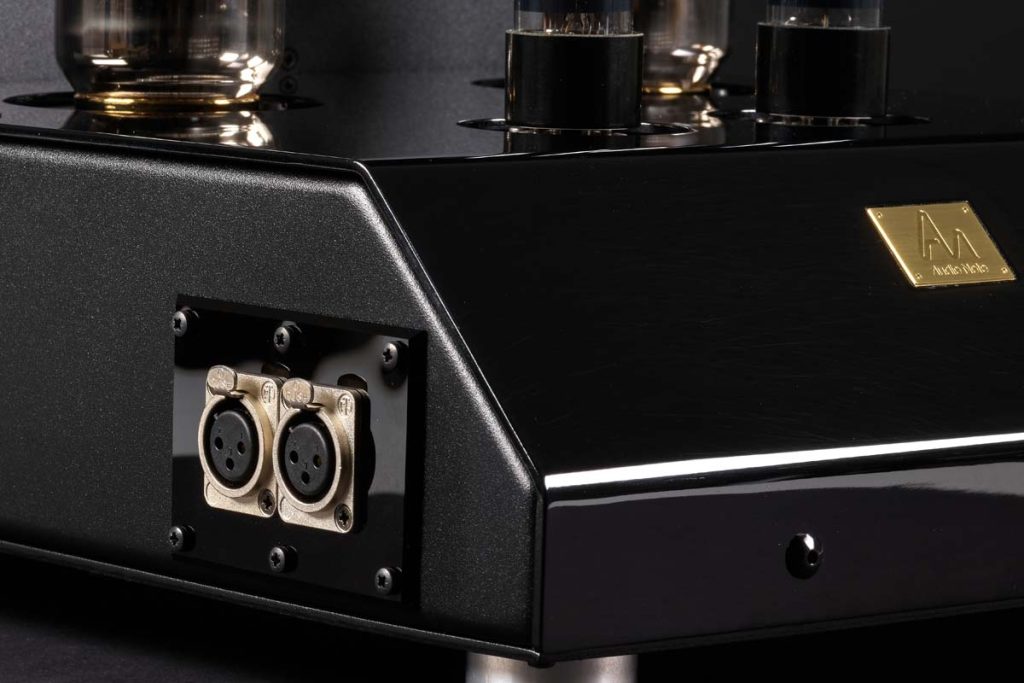 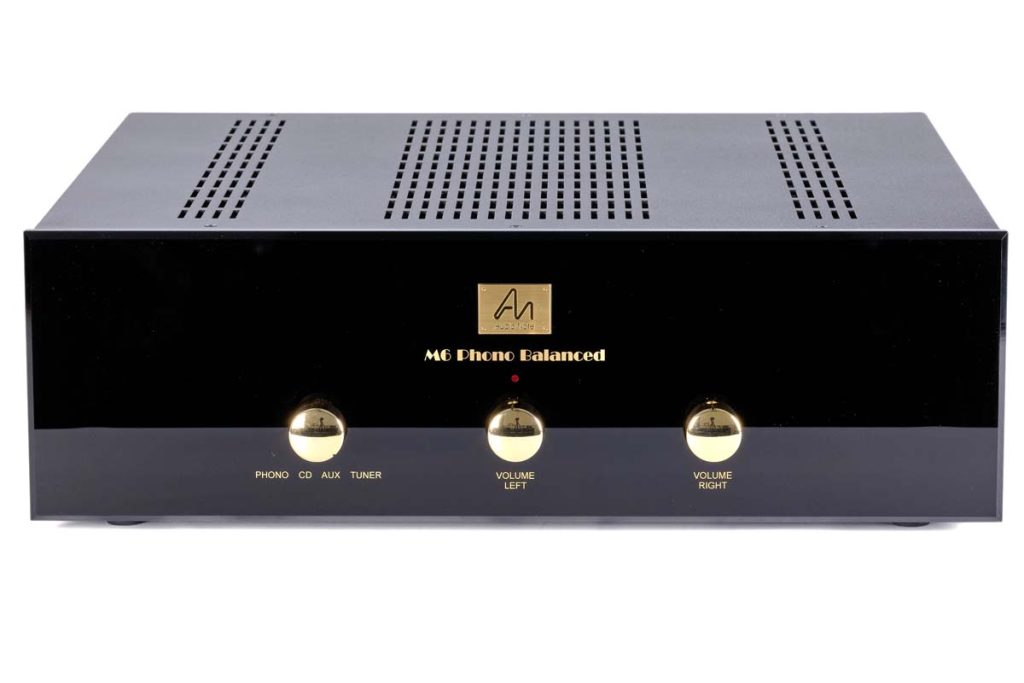 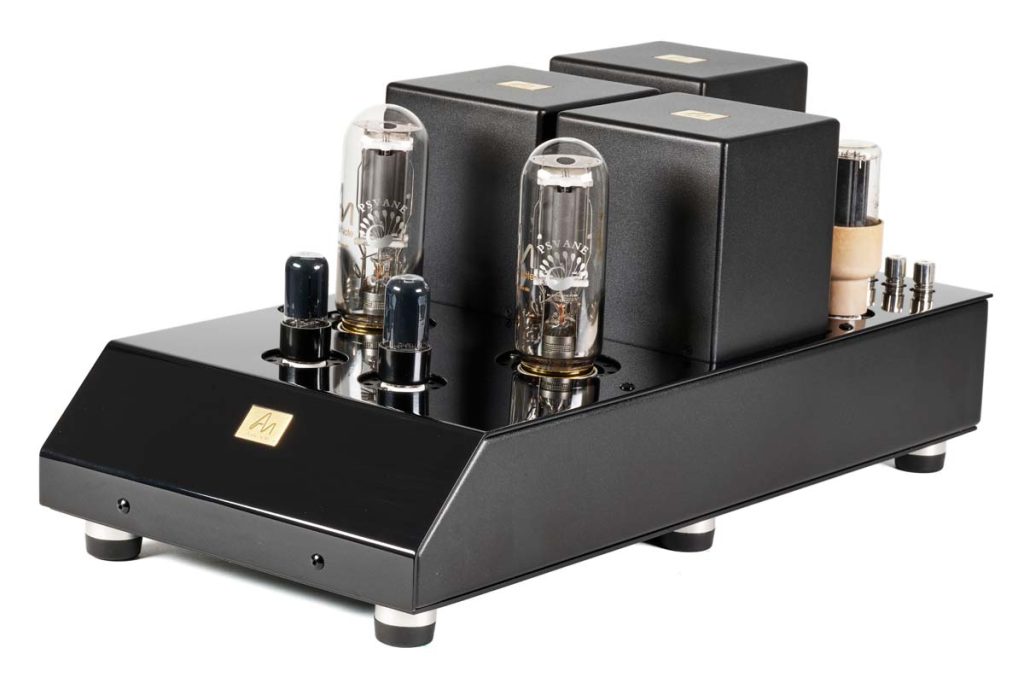