For the innermost circle of bebop musicians, Max Roach was the go-to drummer. No one let the rhythm whirr away on the ride cymbal and hi-hat as excitingly as he did. No one played counter rhythms this sensational with snare, toms and bass drum. His intricate percussive patterns are said to have been inspired – at the highest tempo – by the rattle of the New York Subway. When Roach was 30, producer Gene Norman suggested to him that he should found a band of his own – he, Norman, would be the manager. Roach knew right away whom we would want on board as co-leader: Clifford Brown, who, at a mere 23 years old, was the brightest star on the trumpeter’s firmament; who imbued the eighth note lines of the Bebop language with new magic – with a warm tone, melodic virtuosity and a percussive accent. Bebop star Charlie Parker commented on Brown: “I can hear it, but I can’t believe it.” Jazz trumpeter Nicholas Payton said: “I doubt anyone will ever be able to play the trumpet like this.”

Since Max Roach was active at the west coast at the time, he arranged for Clifford Brown to be brought there from New York. Then, the two of them went on the lookout for band members there, in California. They found: saxophonist Harold Land, who lived in San Diego, pianist Richie Powell, who was giving guest performances with Johnny Hodges in Los Angeles at the time, and bassist George Morrow, who was doing lots of gigs in the clubs of San Francisco. The quintet’s first recordings were created in august 1954 – five tracks for a ten inch record. For the full LP, two more tracks followed in february, and within a year, the new twin star band would do as much as four (!) more LP albums. The soaring flight of the Brown Roach Quintet would not stop until a tragic car accident put an abrupt end to it in 1956. 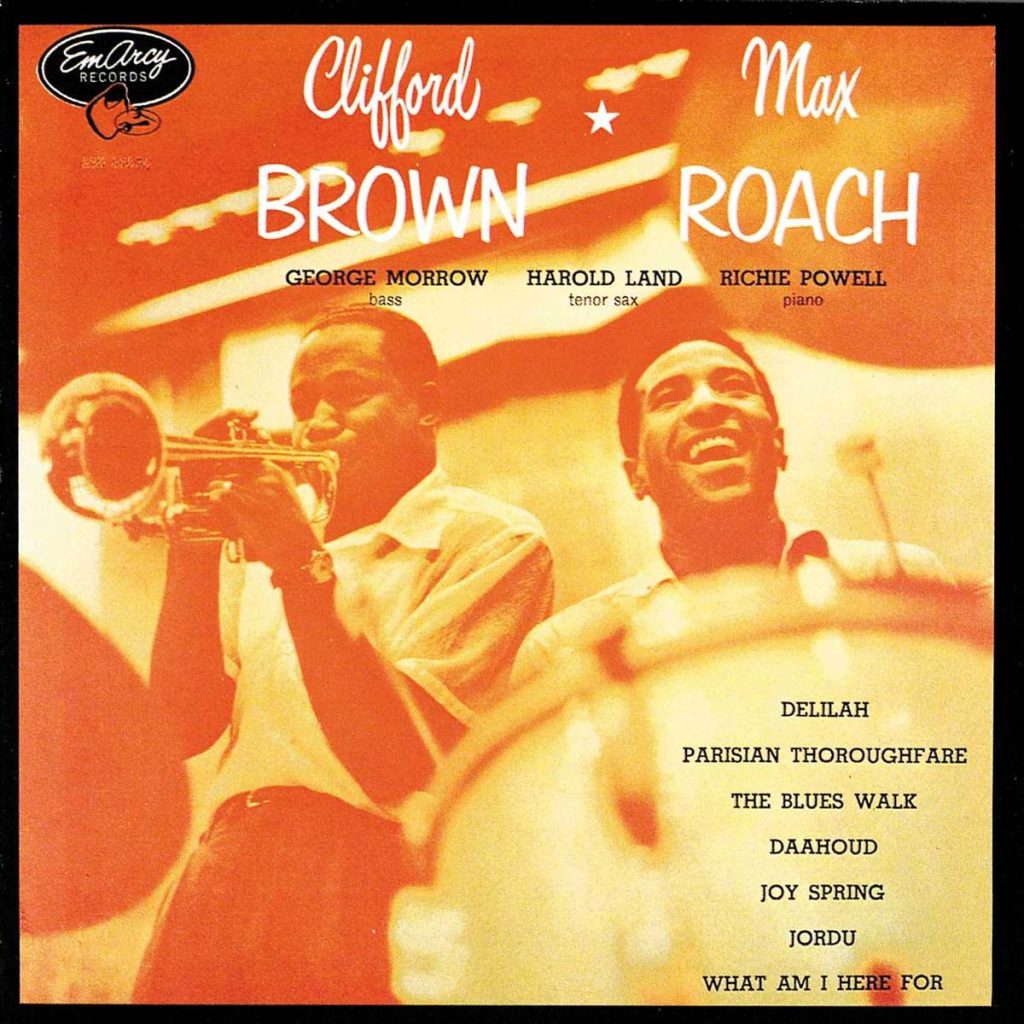 Right from the first track (“Delilah”), this band displayed an unmistakable sound of its own. This was bebop at the highest technical level, yet played with unparalleled precision, warmth, relaxedness and emotional range. The reason for this was, perhaps, simply the perfectionism shared by the two band leaders. Or maybe the disciplining influence of the smooth and sophisticated jazz of the west coast. Or possibly a deeper understanding for the then brand new LP format. In any case, this quintet’s debut album immediately lifted modern jazz to a whole new level of maturity. Since the band loved its clear structures, it would later occasionally be referred to as pioneering formation of hard bop. Of the three pieces contributed to the album by Clifford Brown, every single one would become a classic: “Daahoud”, “Joy Spring” and “The Blues Walk”. “Parisian Thoroughfare” (by Bud Powell, Ritchie Powell’s older brother) and “Jordu” (by Duke Jordan, Max Roach’s former colleague in the Charlie Parker Quintet) are also considered evergreens of bop today. However, the eight minute opener “Delilah” is probably the one to have made the biggest splash of them all. The track is an adaptation of a film score by Victor Young, played with crystal clear riffs, vamps and solo structures as well as an irresistible sense of melancholy.